The Game Itself
4 Stars
The Video: Sizing Up the Picture
3.5 Stars
The Audio: Rating the Sound
5 Stars
Replay Factor
4 Stars
Bottom Line
Recommended

Although it is immensely popular in Japan, the Western audience is still quite new to the Hatsune Miku craze. What started as a Vocaloid package (Vocaloid being singing synthesizer software) has exploded into a series and franchise of its own, spawning more character-based packages as well as a slew of other bits of media.

While there are over ten 'Hatsune Miku' games in Japan, with more to come, Sega has only released a couple of the titles in the West, and that's only started in the last year. However, they are slowly being localized, as the release of the 3DS spin-off game 'Hatsune Miku: Project Mirai DX' shows.

'Project Mirai DX' offers no story for players to puzzle through, nor any mission objectives to fulfill. After all, Miku and her friends are idols, and that's all the reason that's needed for a rhythm game to exist. When the game is first booted up, players pick from one of six Vocaloid idols and a room (both of which can be changed at any time), and they are unceremoniously plopped into the game world. Honestly it's a refreshing approach in an industry that feels like it needs a plot for everything. 'Project Mirai DX' goes right to the meat of the game, which is pretty great. 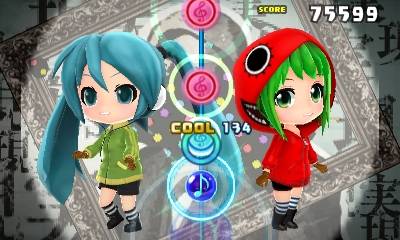 From the main screen (which is of the idol idling in his or her room), there are a few different ways to go. Players can go to the store and buy the idols new outfits and decorations, which are unlocked for purchase by completing songs. They can also go to the studio and tweak everyone's dancing routines, allowing for custom dances during the many songs available. There's even the ability to watch the tracks' videos without the need to actually play the songs, letting players enjoy the colorful and cute music videos. While I suspect that many fans will enjoy all these little extras, and will spend hours playing with room setups and dance routines, the key is that the extras never get in the way of the core of the game... that is, playing through and completing songs.

'Project Mirai DX' offers two completely different rhythm modes. The first, Tap Mode, has players tapping the 3DS's touch screen to the beat. The game ups the difficulty by adding more notes and sectioning off the touch screen, requiring the player to tap the right area of the screen. This mode is much like 'Theatrhythm: Final Fantasy', and of the two, it's the easier of the modes. While Hard mode can be frantic, it's not impossible for newer players to clear most of the tracks on this mode. Even so, Hard versions of the tracks aren't unlocked until they are beaten on Normal, so players get plenty of practice before tackling the tougher difficulty. 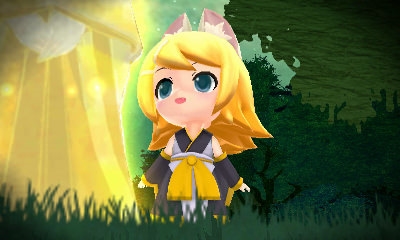 Then, there is Button Mode. As the name suggests, players use the buttons to tap out the beat. This mode is more similar to the typical Hatsune Miku gameplay, and also harder overall, simply because there are more buttons to press than areas of the touch screen, and therefore this mode requires more mental and finger dexterity to complete the songs. It's  a nice surprie to have found both of these modes in the game, as each style is different enough that they could constitute their own games. Instead, Sega thankfully included both within one Miku title, letting players pick the mode they enjoy mode and work to master it. Both of the modes are well implemented, and neither feel like an afterthought, so no one is going to miss part of the experience by playing Tap Mode over Button Mode, or vice versa. 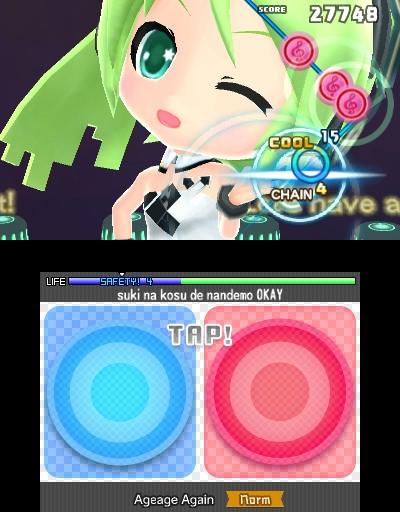 The graphics are going to be hit or miss with most people. Instead of using the typical Miku style of "realistic" characters (or rather, realistic by anime standards), Miku and her friends are super deformed, becoming chunky chibi characters. Not everyone is going to be a fan of the cutesy look, but I personally think it's endearing. It also works well for the 3DS, as the system probably couldn't handle the graphical style that most of the 'Miku' games follow. Also, as is important for a rhythm game, the notes and prompts are easy to discern, even if the videos in the background are made to be distracting. 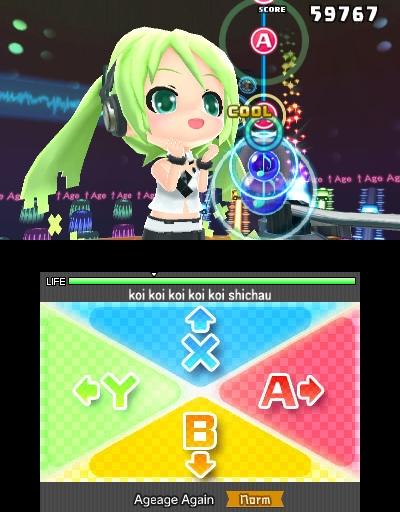 The most important aspect of any rhythm game is its music—no matter how good the mechanics are, a rhythm gme isn't going to be fun if the songs are subpar, after all. Thankfully, 'Project Mirai DXs's Vocaloid playlist is very solid. It is worth noting that the majority of the songs fall squarely into the J-Pop category, so those that have an aversion to that genre of music certainly won't want to pick this title up. For everyone else the soundtrack on offer is good. 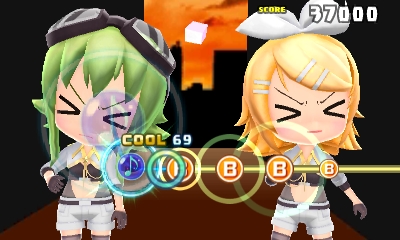 In addition to the quality of the soundtrack being relatively high, there is also a surprising amount of tracks available. Players will spend multiple hours just getting all the songs available, which is always great for a rhythm title. On top of that, there are the two distinctly different modes to master, and all sorts of costumes and house accessories to buy for Miku and her friends. There is a lot of content here, and enough for any genre fan to be busy for a while. 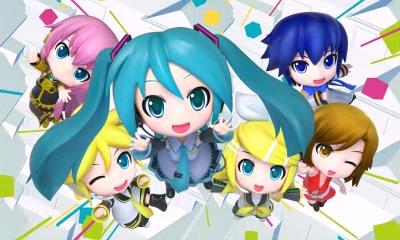 Despite being a spin-off of the main series, 'Hatsune Miku: Project Mirai DX' is a very solid rhythm game. There are a ton of songs to play, and the two modes allow for a lot of replayability. The art and music might be a little too cutesy for some, but many will find an enjoyable time with chibi Miku and her friends.