Digital copy reviewed for Xbox One. A pricier boxed version is expected sometime in 2016.

Mega Man is one of the most recognizable gaming icons of all time, right up there with early Nintendo icons Mario, Link, and Samus. He was created by Capcom developers Akira Kitamura and Keiji Inafune, the latter of whom went on to develop many 'Mega Man' games and also produced 'Dead Rising' and 'Lost Planet'. The 'Mega Man Legacy Collection' curates the first six 'Mega Man' titles, all of them released between 1987 and 1993 on the Nintendo Entertainment System (NES). The project was developed by a reborn Digital Eclipse, a company specializing in game refurbishing and preservation.

Early 'Mega Man' games followed a very recognizable pattern. They are side-scrolling 2D platformers in which the hero is a robot who can jump and shoot energy balls from his hand. The games sport a series of distinct bosses, the robot masters, all robots whose names also end in "Man." Each boss has a specific power that Mega Man can collect upon their defeat. The dastardly robots are controlled by the evil Dr. Wily, who has grown tired of being a humble lab assistant and has set out to conquer the world. Mega Man (also known as Rockman in Japan) and his sister Roll were also created by Wily and his mentor Dr. Light, and it falls upon Mega Man to defeat his brothers and Dr. Wily and restore order to Monsteropolis. 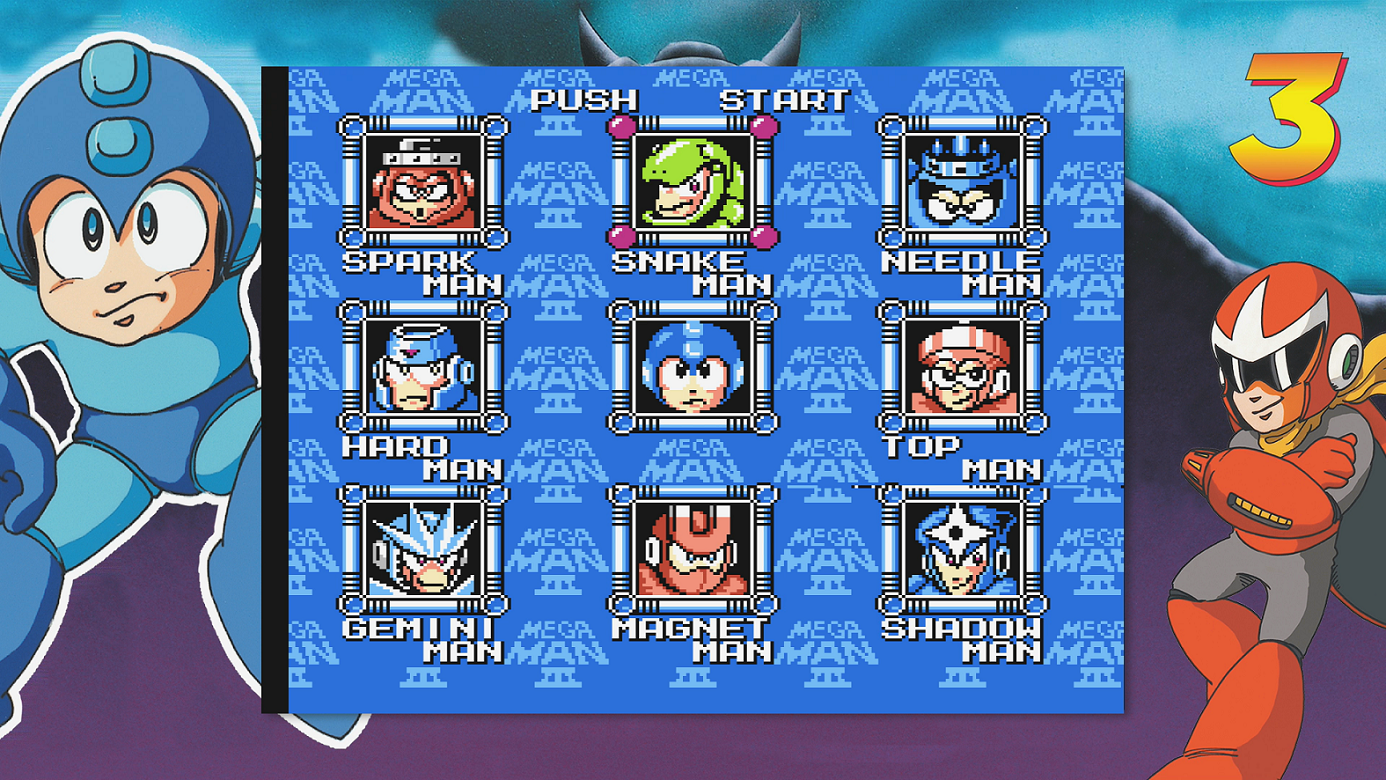 The 'Mega Man' series has spawned many sequels, remakes, spin-offs, and compilations. Unlike earlier remakes, such as the PSP’s 'Mega Man Powered Up', the titles in 'Mega Man Legacy Collection' have not been significantly altered. There is no chibi art here or anything like that. The games are presented in all of their 8-bit glory, along with a lot of bells and whistles to go along with them. 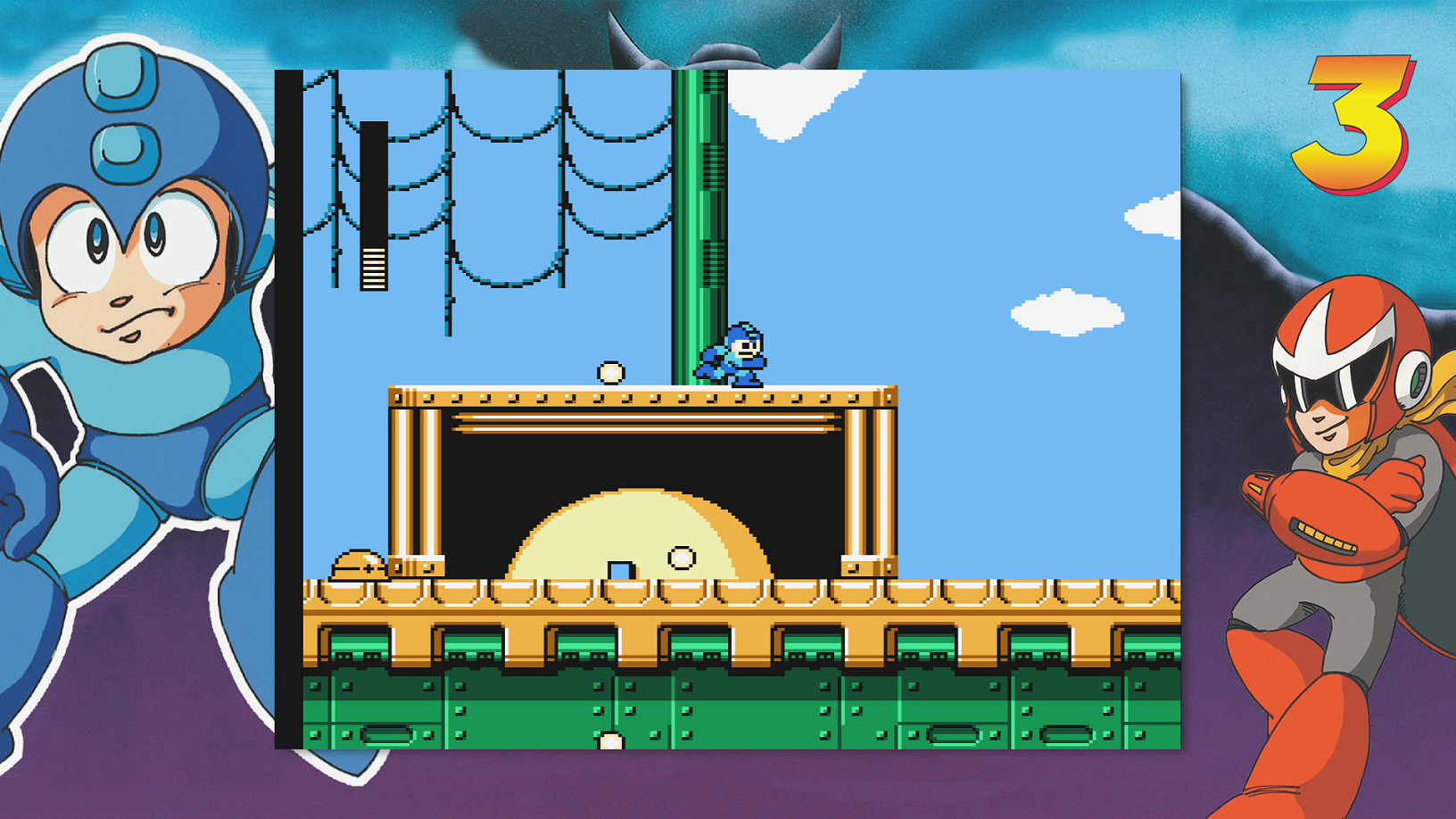 The games in the collection play well, or at least as well as games were playing in the late 80s. Like the older selections from 'Rare Replay', it is a profound learning experience to play 30-year-old games. 'Mega Man' games are renowned for their difficulty, especially the first game in the series. It has been quite a while since I played any of them, so it was mixture of nostalgia and pain to get through the platforming sections and the constantly respawning enemies. Sometimes it's a good challenge, such as fighting (most of) the bosses, but other times the gameplay can be downright unfair, like trying to get through Crystal Man’s level in 'Mega Man 5' with its damn falling rocks. Not unlike a roguelike, 'Mega Man Legacy Collection' is less of a mainstream game, and is probably most appropriate for 'Mega Man' aficionados or retro platforming junkies.

Each robot boss can be fought in any order, a non-linear approach that was unique for the time and would influence later generations. Some of the bosses have weaknesses to specific weapons, rewarding players who complete levels in a certain order. Mega Man’s most basic weapon can be fired in a semi-automatic fashion and also in three-round bursts, although it can be difficult to control while jumping, and I often found that he would switch directions on me between shots. I have a few other mild complaints about gameplay (like the original menus, which are an inscrutable mystery), but ultimately this was a series that was designed to be hard to complete, so a "warts and all" approach is highly recommended. 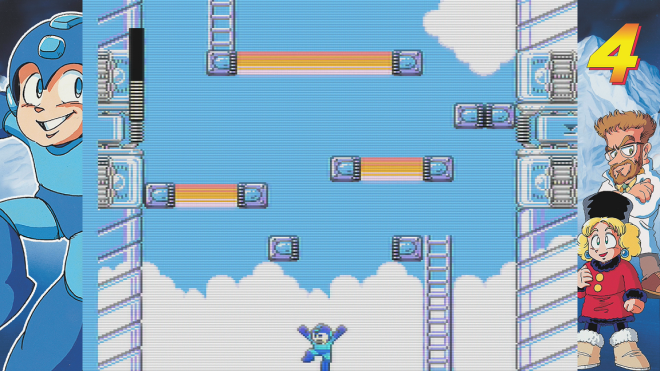 All of the 'Mega Man' games included in the anthology have been touched up with the Eclipse Engine. This is a proprietary Digital Eclipse product, not to be confused with the BioWare engine of the same name. The new engine enables a clean, high-res rendering. Edges are sharper, with less fuzziness around the sprites. Colors are brighter and there is more contrast between similar shades, such as the infinite blues (the NES had more capacity for blue than any other color, hence Mega Man’s other nickname, the "Blue Bomber"). Effects see a modest enhancement, but there is only so much that can be done with 8-bit assets. The games' original slowdown has been kept intact, and that means framerate issues. This authentic approach should suit longtime fans, but may not be equally appreciated by anyway new to the series.

Several formatting options have been added for the discerning player. The standard aspect is a pillarbox with black bars, which can be injected with a hand-drawn border if desired. The screen can also stretch to a wide or full arrangement. Scanlines and "fuzzy tube TV effects" have been added as options. Even when these settings are not in use, some of the sprites have a tendency to clip in and out. It’s a bit of an eyesore but doesn’t affect gameplay. 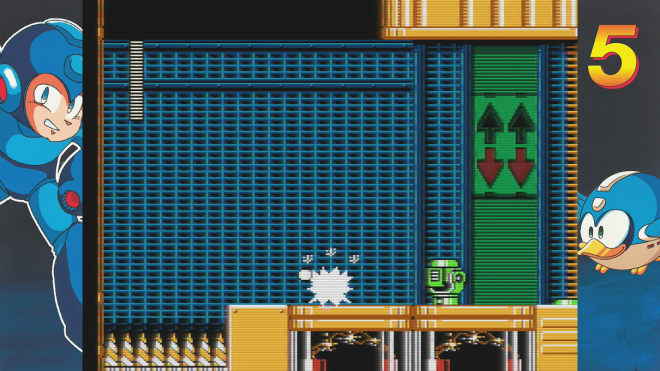 The high-pitched MIDI-like soundtrack is here in all its glory, along with the arcadey shooting and explosion sound effects. An important highlight of the series, the music is clear and strong with very few problems.

Digital Eclipse and Capcom have bundled a great deal of content around the core campaigns. One of the most interesting is the challenge mode, which strings together discrete levels and boss fights into themed playlists. Leaderboards record scores, and also offer replays for those who need a bit of mentoring to get through the challenges. A database/bestiary contains info on all enemies, including some tips for defeating them. Also, for people who want to rush straight into pitched android battles and skip all of the platforming bits, any boss fight can be accessed from the database (a great way to practice). Gamers who prefer the old ways can use passwords to save their progress, or you can simply save and load whenever you want from the metamenu. 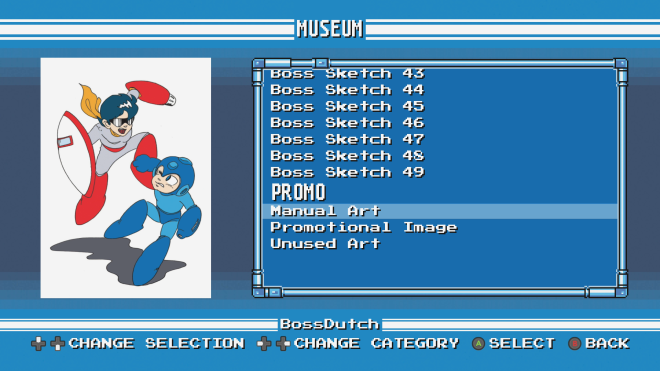 In addition to the new engine, options, and modes already mentioned, the 'Mega Man Legacy Collection' contains a huge repository of concept art, design sketches, storyboards, production pieces, character studies, and even more obscure things like coupons and flyers. These have all been uploaded at a high resolution and they are not locked or hidden behind collectibles. A comprehensive music player has been included in the menu, containing all of the soundtracks. 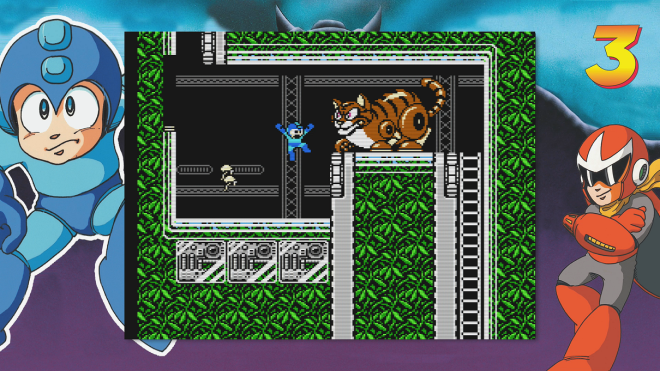 Digital Eclipse considers 'Mega Man Legacy Collection' to be just as much a time capsule or museum exhibit as it is a video game, a sentiment I do not disagree with. A great deal of work has been put into curating the games and adding new, optional content while retaining their retro aesthetic. A few video issues crop up here and there, and perhaps the gameplay can be stubbornly vintage, but this is still a great compilation.