The Game Itself
3.5 Stars
The Video: Sizing Up the Picture
3.5 Stars
The Audio: Rating the Sound
4 Stars
Replay Factor
4 Stars
Bottom Line
Recommended

'The Swindle' was developed by Size Five Games, a British company that develops indie titles and won a BAFTA a few years ago for a sex ed game, of all things. 'The Swindle', which has been cancelled at least once, experienced a small delay on the Xbox One but is now available along with versions for the PS3, PS4, Vita, PC, and someday the Wii U.

Another entry in the recent trend of roguelikes, 'The Swindle' is a 2D stealth platformer featuring procedurally generated levels, high difficulty, and a challenging death penalty. From my trusty zeppelin tethered over an alternate 19th-century London, I plotted my next heist on the unsuspecting poor people living in the slums. It turns out that these poor people can afford very sophisticated security systems, including guard robots, mines, cameras, and reinforced computer terminals, although they very rarely lock their doors. When I eventually made it to the nicer parts of town (after many agonizing deaths), I discovered an even more grandiose surveillance gauntlet that would put the NSA to shame. 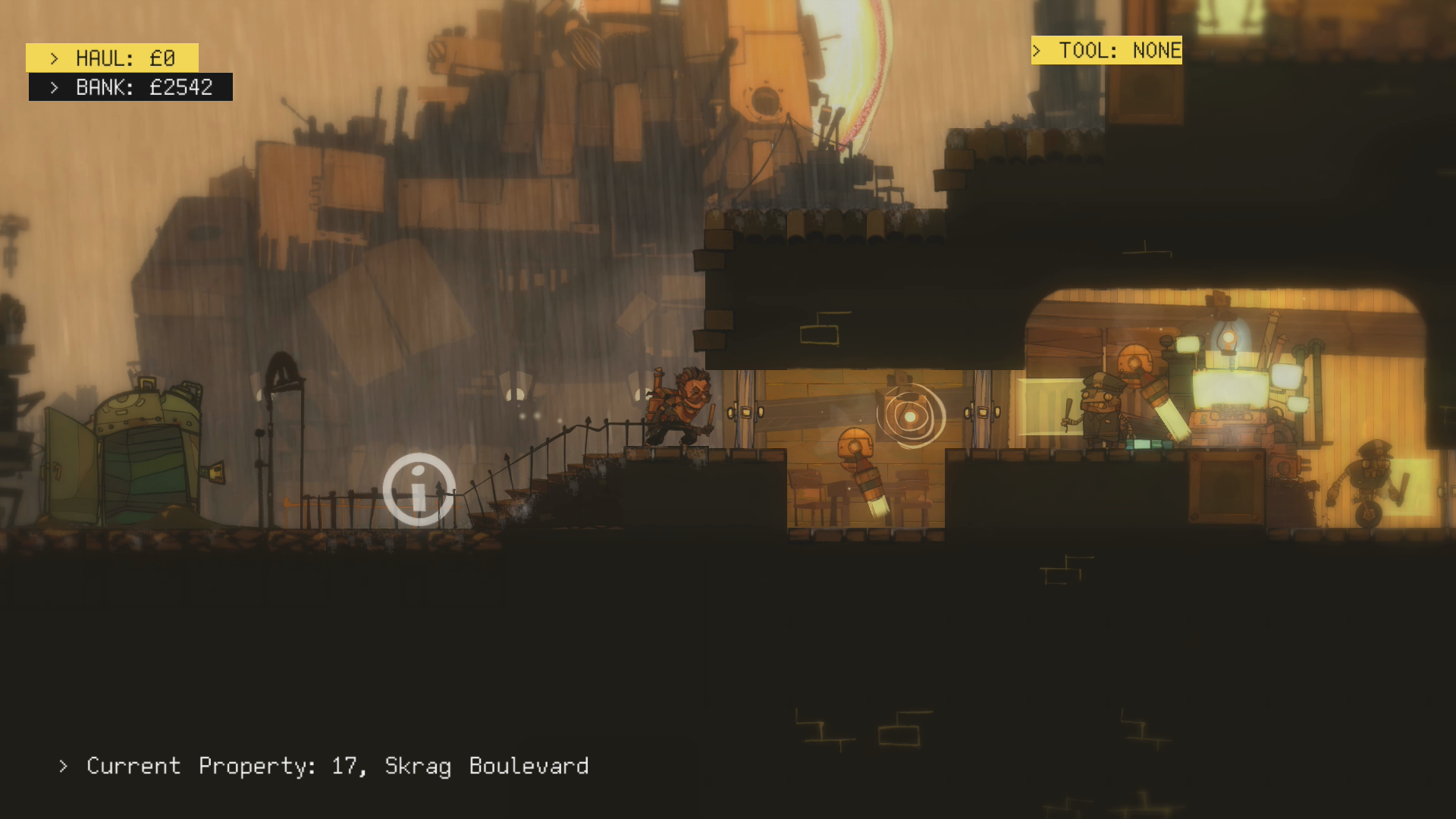 A thief can only suffer one hit before they die, so stealth is crucial. In the event that I was discovered, I usually abandoned all aspirations of thievery and hightailed it back to the airship. Unlike many stealth games where guards will return to their patrol behavior after a time (even if they discover a corpse, isn’t that odd?), the robots of 'The Swindle' will stay on alert throughout the entire heist. During this time, all money still available will slowly trickle down, and eventually police bots will show up with armed hovercraft and start destroying the building to find me, which seemed a bit excessive but maybe these slumdwellers have excellent insurance in addition to their cutting edge security.

Each playthrough has a duration of 100 days, with one heist constituting one day. The heists themselves are not timed, so I soon learned to take it slow and case the house carefully before getting into the nitty gritty of disabling the security, walloping guards with my blackjack, and jumping over large spiked pits. How do people live in these homes? Scotland Yard is working on an ambitious domestic spying program that will be completed in precisely 100 days, making theft impossible after it is completed. It is possible to extend the timeframe and even steal the project out from under the cops, but this requires a huge investment per attempt.

The vagaries of procedural generation sometimes results in oddities among the level design or guard behavior. On day 3, before I could afford bombs, all of the computers in the house were placed in an underground vault that could only be reached with bombs. On other days, the interior could only be accessed via one passage that had unmoving guards, or tall ledges that can’t be reached with a double jump. On those days there’s nothing that can be done except to gather whatever spare change I can and return to the airship to try again. While frustrating, I learned to take it in stride, and because thieves earn experience that accumulates the longer they live, I became very conservative during heists. It is much better to return to the airship with only half the take than to go for broke, die, lose all of the money in my hands, and have to employ a new thief the next day. 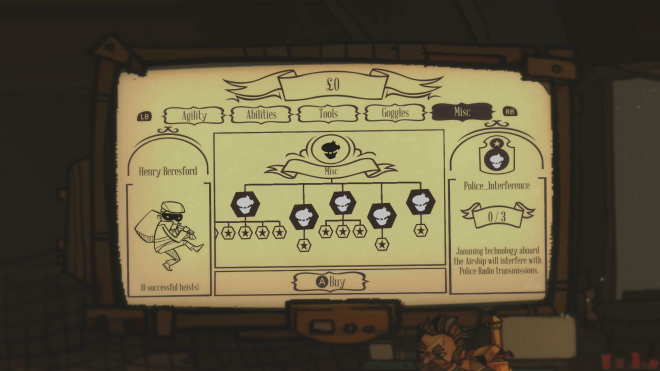 'The Swindle' is set in a steampunk rendition of London in 1849, where clockwork and gears reign supreme. Imagine a dark, cartoonish style in the vein of 'Mark of the Ninja' infused with a healthy dose of steam gadgetry, springs, screws, and Victorian-style leather and contraptions. While the game is mostly free of framerate issues or artifacts, sometimes the platforming controls are a bit sticky, especially while jumping. 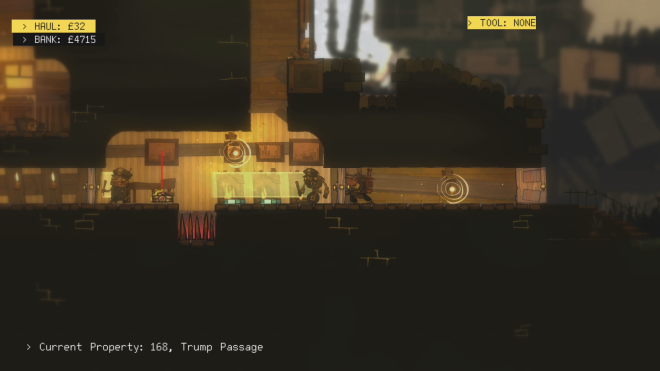 The score uses piano and horns with a distinctly vintage style, and much of the percussion is the ticking of a clock. A grinding mechanical noise constantly drones on in the background. During an alarm, the music becomes more urgent and takes on an almost electronic undertone. The sound effects are spot on with the steampunk theme.

The campaign itself is basically an endless replay with a different level and rewards every time. Levels are short, especially in the early areas, running only a few minutes each. The game increases in difficulty the more tiers are unlocked, from the slums to the warehouse district and banks. If a thief died, all of my purchased upgrades applied to their replacements within the playthrough, but the death of a particularly old thief could be quite sad. 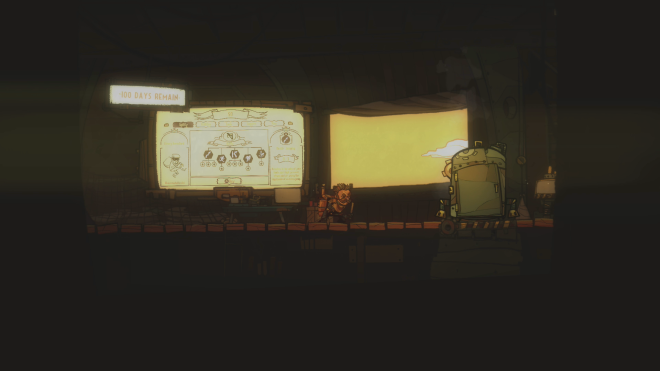 'The Swindle' can be very satisfying, if you don’t mind its cruel difficulty and regularly mystifying level design. It is not a AAA stealth game with all of its fancy checkpoints and low difficulty levels and no death penalty. It’s not that those things are bad necessarily, it’s just that roguelikes are intended to be a very different experience, one in which success is distant, pain is frequent, and every reward is a joyous occasion.