The Game Itself
3 Stars
The Video: Sizing Up the Picture
2.5 Stars
The Audio: Rating the Sound
3 Stars
Replay Factor
2 Stars
Bottom Line
For Fans Only

The 'Toy Soldiers' franchise began in 2010 as a temporary Xbox 360 exclusive, and became one of the highest-selling games on the Arcade service. It was revisited the following year with 'Toy Soldiers: Cold War', with both games being published by Microsoft. Series developer Signal Studios has since sold publishing rights to Ubisoft, so 'Toy Soldiers: War Chest' sees the series go multi-platform.

'Toy Soldiers: War Chest' follows closely in the footsteps of previous entries in the franchise. It is a mix of tower defense and third-person action, with the contents of a child’s toybox being emptied onto the floor and then used in mock battles against other toy armies. It is a modified form of tower defense, with a bit of MOBA-style action thrown in through the use of powerful, customizable heroes that periodically spawn and can be directly controlled by the player. The first hero in the campaign is Kaiser Wilhelm, last emperor of Germany and ironically, an incompetent wartime strategist in real life. The other three stock heroes abandon the green army men theme and include Phantom the sci-fi covert operative, Starbright’s care bear hordes, and the Dark Lord’s tabletop RPG monsters. 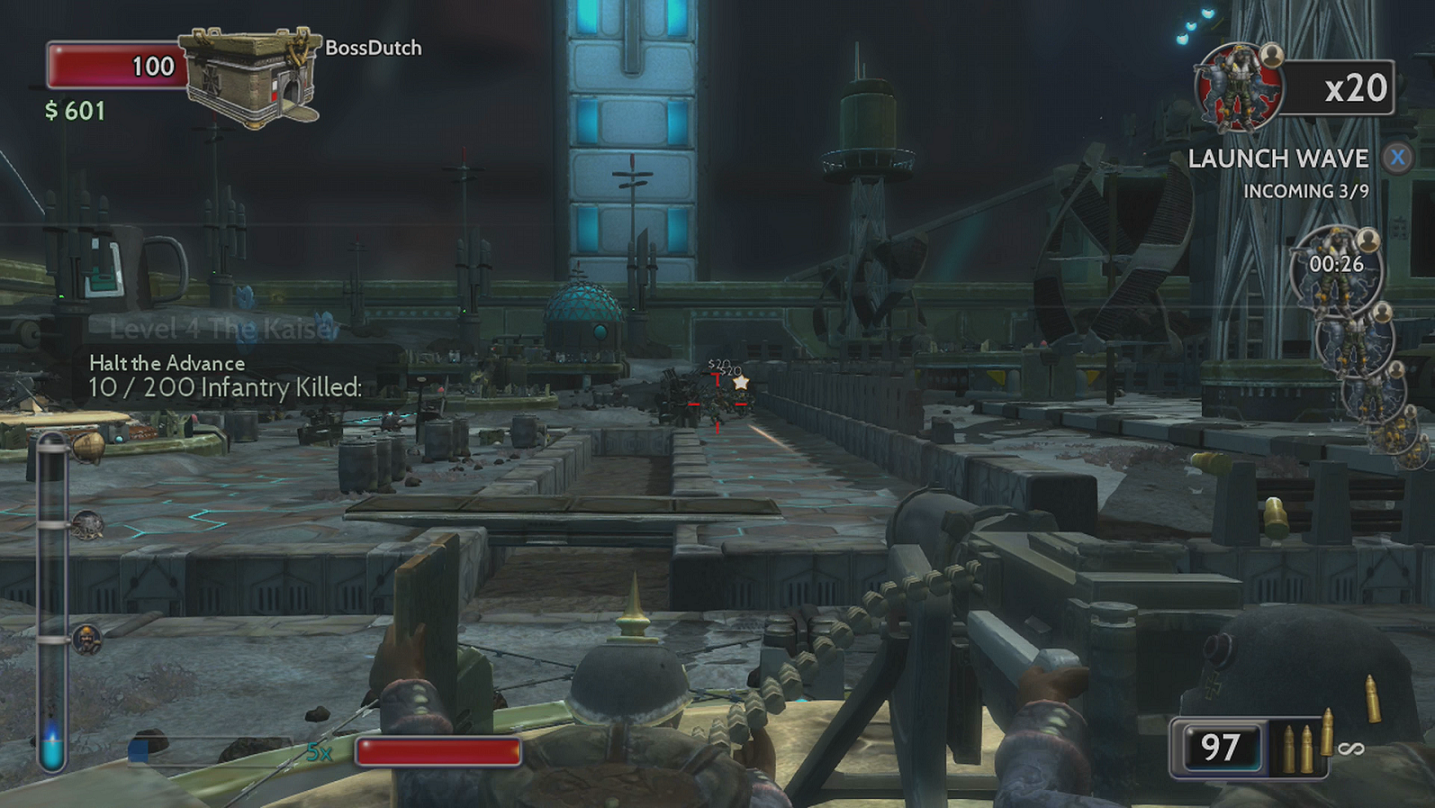 'War Chest' is disappointing right out of the gate because it has all of the trappings of a free-to-play game, but costs money to download the client. Half of the armies are locked behind a $15 paywall, including recognizable franchises like G.I. Joe, 'Assassin’s Creed', and He-Man. The dubious caveat is that most of the armies are really just palette swaps of each other, right down to the heroes. There are different effects for the turrets, like the bubblegum launchers of Starbright compared to the conventional machine guns of the Kaiser, but for all intents and purposes they are the same gun. To add some flavor and sustainability, armies can be upgraded over time with tokens that are earned through gameplay or purchased with real life money, just like in a casual mobile game (ew). Microtransactions in a Ubisoft game are nothing new, but that hardly makes it ok.

The gameplay fares better, but only just. The twin pillars of tower defense and third-person shooting help to prop each other up, but the army’s AI suffers from incompetence. When I was not actively controlling a turret, the AI had serious problems engaging even weak enemy formations, and that was with all of the upgrades I could bolt onto it. Many of the later waves in a match involve different kinds of units emerging from several lanes, making it an exercise in fruitless multitasking to try to contain everything. When the hero is activated, the turrets immediately revert back to drunken style. The level design is also confounding, with several maps featuring lanes that hide infantry for part of the route, giving them temporary invincibility.

It takes some time to earn enough experience during a match to activate the army's hero, but the heroes provide the only empowering experience that 'War Chest' has to offer, because the turret gameplay is so weak. The heroes can be customized to a degree, with a different kit that can be changed between matches. They initially have only a short time on the battlefield, but this can be extended with battery pickups. I could also forego the hero and keep building experience to activate a few damaging abilities, like the Kaiser’s zeppelin bombing run, but most of the time they paled in comparison to the devastation that the heroes could unleash. 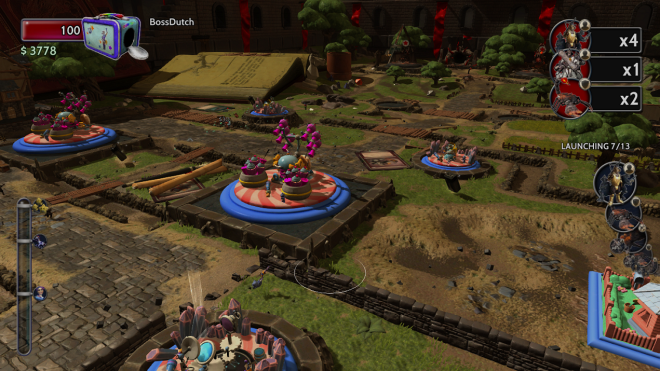 'War Chest' has made strides in the series' use of color, if not resolution. Specifically, the endless parade of browns and greens has been expanded, most significantly in Starbright’s army. Playing as Starbright is worth it for the giggles alone, as I peppered enemy formations with bubblegum, shooting stars, and moonbeams. Like a 'Lego' game, this is the kind of combat that doesn’t have any blood or guts - all of the toys break into plastic pieces when defeated. The textures aren't anything to write home about, and the hitboxes are very odd - hitting targets, even with a super high rate of fire minigun, is unreliable. Loading times are excessive, frequently adding up to more than a minute long, especially in multiplayer. 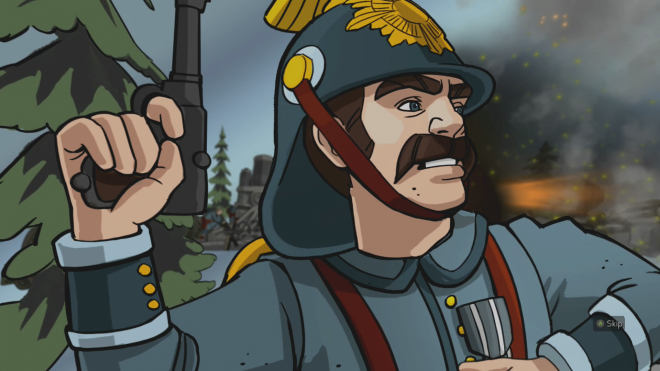 Background music fades away during most of the match, and even when it doesn’t, it’s covered by the endless grinding of the miniguns or the arcadey laserbeams of Phantom’s army. The voice acting is minimal, but adds to the cartoon factor.

The campaign is relatively long, not because it has a lot of levels but because each match clocks in at a solid twenty minutes or more. There isn’t much variation to be had in the campaign. Each week features a different mini-campaign that can be completed daily for special rewards, but also is not very different. The multiplayer is basically the same, with very long, drawn-out matches and co-op that can only be accessed in a party. 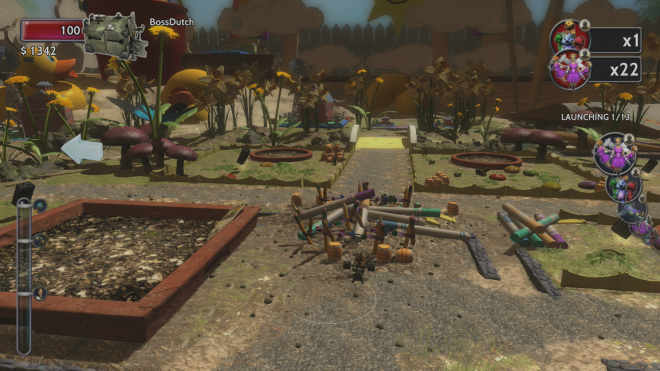 They don’t make them like they used to, and in the case of 'Toy Soldiers: War Chest', the result is a bland, paid freemium game that falls short of the series' own benchmarks. It is an action/strategy title that doesn't have much of either and can be safely passed over by all but the most forgiving tower defense fans.