The 'Syndicate' series began in 1993, when Bullfrog Productions (creators of 'Dungeon Keeper') released the first game on Amiga and DOS. It was an isometric game that featured a squad of cybernetic agents employed by a megacorp with the stated goal of taking down all of the other megacorps in a cyberpunk setting. This was done through assassination, infiltration, theft, mind control, and other assorted devious methods. In 1996 Bullfrog released a sequel, 'Syndicate Wars'. Despite its strong reception, the series kind of faded away, until EA published a first-person shooter reboot in 2012, also called 'Syndicate'. It retained some story elements from the original and had decent reviews, but sales were poor, and longtime series fans were left wondering if there would ever be another 'Syndicate' set in the classic mold.

The following year, the director of 'Syndicate Wars', Mike Diskett, announced a Kickstarter for a spiritual successor to the old series, called 'Satellite Reign'. They collected a respectable £461,333, enough to tack on a few stretch goals.

'Satellite Reign' is not the kind of game that holds your hand. After a brief tutorial I was dumped into the city with a trio of eager agents, with only a "good luck" and a "here’s your fourth agent, by the way she’s in a heavily guarded police compound" mission to my name. This made me very happy. It is not a theme park like most open world games turn out to be, where a chipper tour guide would slowly escort me about the various mechanics for hours, withholding the good stuff until halfway through the campaign. It is a sandbox, where the city lives on its own terms, gradually adapting to my presence as I hack into ATMs, infiltrate merc barracks, and bribe dirty cops for information. 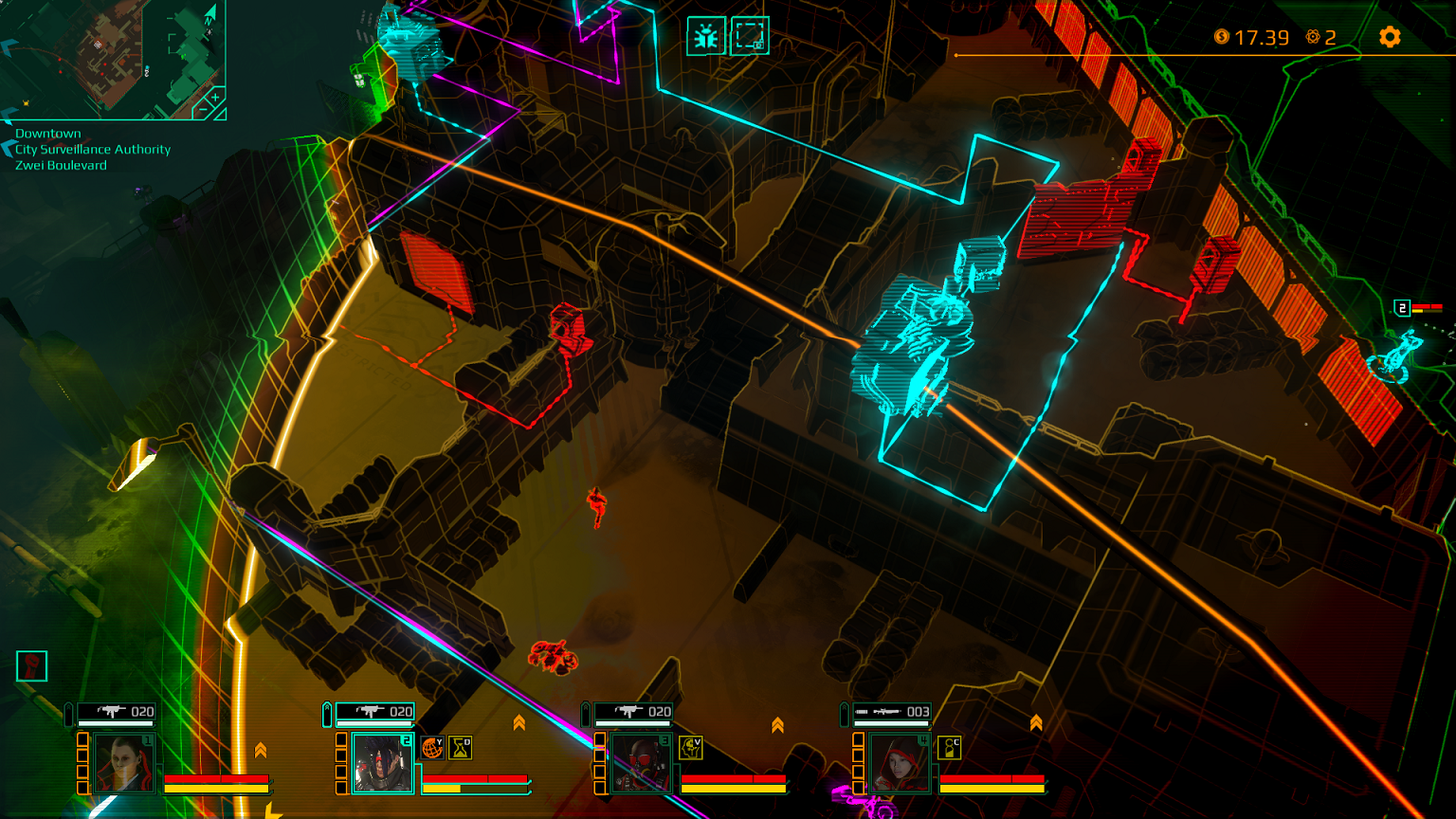 In this city, as in any just about cyberpunk story, megacorps have taken over the governing role from the state and mixed in their own special brand of fascism, information control, and terror. It’s the future, so there are many future things like cybernetic implants, laser guns, and outlandish hairstyles. The game takes a laissez-faire approach to both exposition and morality. I am free to explore the city, steal things, and kill people, so long as I am able to fight off or escape from the responding security forces. The game does not penalize me for doing bad things, nor does it necessarily reward me for doing good things. I am rewarded for serving my own purposes, which I just kind of make up as I go along. My agents aren’t running the March of Dimes, after all - we’re trying to build a criminal empire.

That’s the real beauty of 'Satellite Reign'. I suppose I could be a kinder, gentler mastermind if I wanted to be, using my agents to fight the forces of tyranny and free the city from its corporate overlords. But I don’t want to do that. 5 Lives has given choice to the player, bundled with a loose framework of missions and customizable system of advancement. The four agents, each possessing a very particular set of skills (probably acquired over very long careers), can be upgraded with advanced equipment, abilities, and implants to assist them in the mean streets of the city. They become better at killing, creeping, and hacking. I could obtain new weapons for them, paying with money I siphoned from ATM machines and researched by ethically dubious scientists with prototypes I stole from some dingy corner of the city. If the agents died, I could flash-clone a replacement easily enough, at the cost of some experience. Each mission can be completed how I see fit - I prefer the sneaky approach, with minimal loss of life, but guns blazing is also an effective strategy. All squad members can assist with all approaches, in their own way. 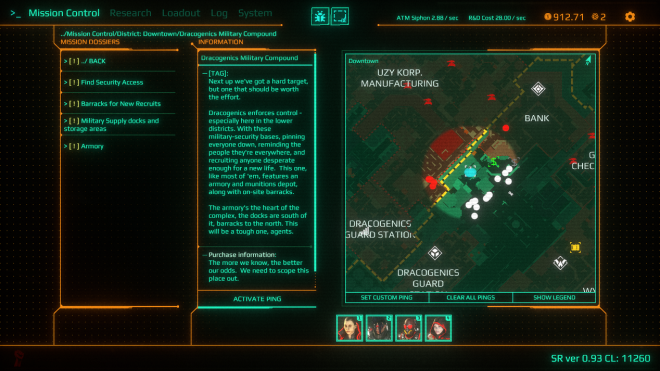 Another Unity Engine game, 'Satellite Reign' looks good but not great. The art design is rich - the city might as well have been plucked out of 'Blade Runner', with how committed it is to the cyberpunk motif. There are neon lights galore, back alley homeless dens, glitzy strip clubs, and seedy markets. The map is a bit intimidating at first, but it is very detailed and I would not have been able to navigate the labyrinthine streets without it. There are a few issues that crop up during play, like string errors and a long loading time when the game starts. 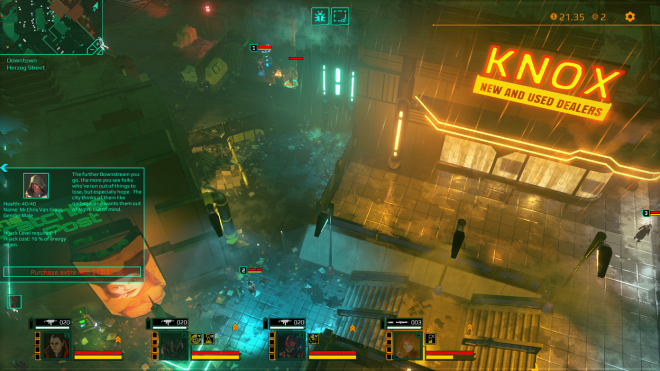 One of the Kickstarter’s stretch goals was the hiring of Russell Shaw, a composer and longtime Peter Molyneux collaborator. He’s currently working on the score for the upcoming 'Fable Legends', but managed to come through with an amazing soundtrack for 'Satellite Reign'. It is a baritone, electronic, foreboding delight, and does almost as much for the ambiance as the art design. 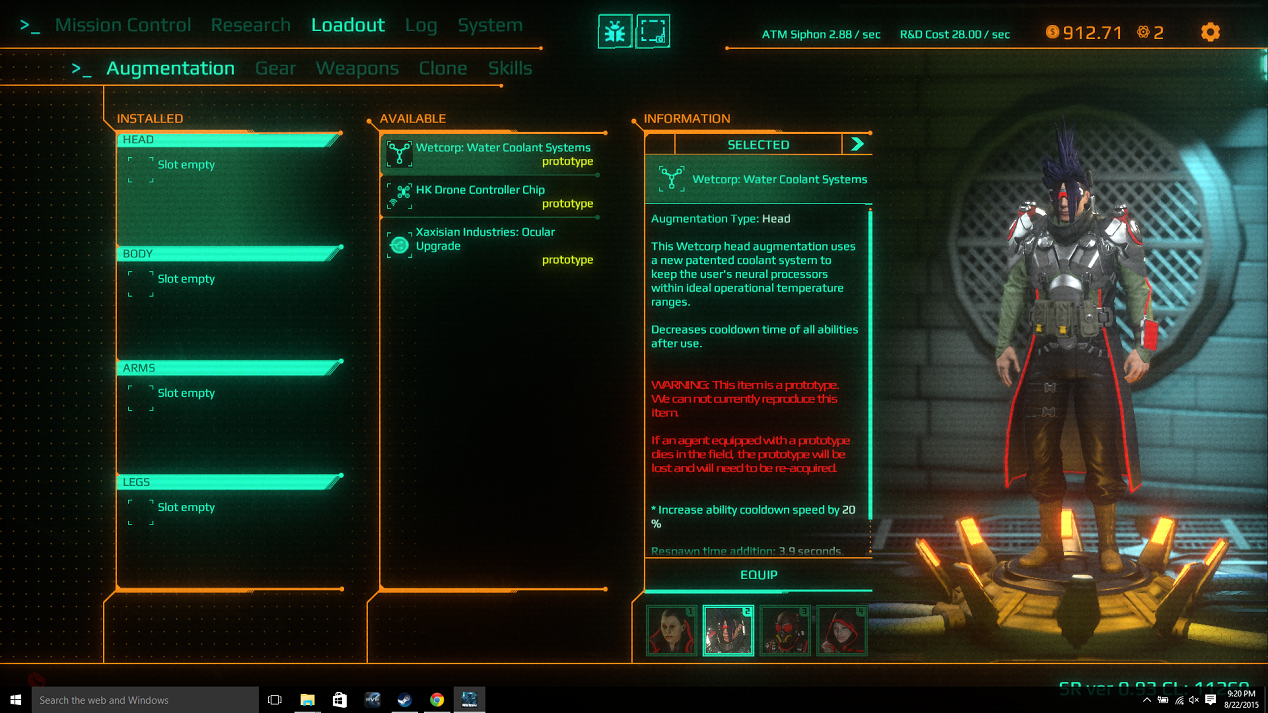 Multiple playthroughs can yield different outcomes if you change your philosophy, and the city is malleable and full of people to kidnap and tech to steal. There is enough content here, and enough capacity for outside-the-box thinking, to keep players engaged for quite a while. 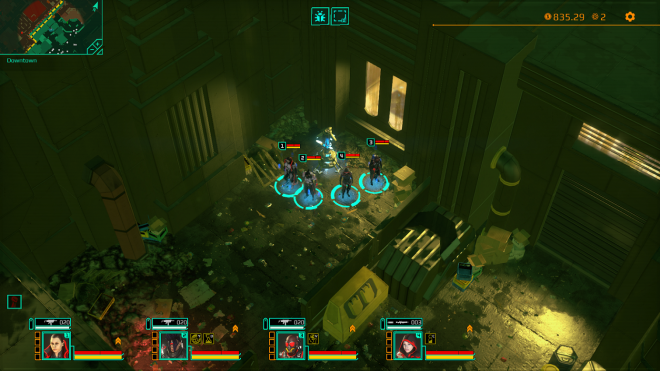 'Satellite Reign' truly embodies the phrase "spiritual successor". It is very much a modern adaptation of an older title. That is not to say that it is without innovation or not a good game - far from it. 'Satellite Reign' takes the best parts of its source material and expands upon them with modern tech, creating an intoxicating, thickly cyberpunk strategy experience. The degree of freedom available invokes that special kind of PC game that is all-too infrequent these days.