The Game Itself
3 Stars
The Video: Sizing Up the Picture
2 Stars
The Audio: Rating the Sound
4 Stars
Replay Factor
3 Stars
Bottom Line
For Fans Only

'ZombiU' was a Wii U launch title in 2012, developed by Ubisoft. While not advertised as such, it could be characterized as a loose remake or spiritual successor of Ubisoft’s very first video game, also called 'Zombi' and released in 1986. The two games share a mechanic wherein the protagonist transforms into a zombified enemy upon their death, to be encountered by the player in the next life. Ubisoft commissioned Australian company Straight Right for a port of 'ZombiU' to consoles and PC, where it is now known as simply 'Zombi'.

'Zombi' starts out much like any zombie survival horror, with a disembodied voice directing me to pick up equipment and weapons and teaching me how to kill undead. However, this isn’t a run-and-gun type of zombie game; it has a slower, more ominous pace. The voice over the radio is the Prepper, a forward-looking survivalist who has prepared for the zombie apocalypse and offers the player the use of his bunker, which for some reason he does not use for himself. He also gave me a tablet with an interactive map, a radar, and a scanner thing, and a cricket bat and bug-out bag. I soon learned that these were not charitable donations, but that the prepper expected me to run around the city completing errands, like hacking into London’s CCTV network and exploring the Buckingham Palace underground. 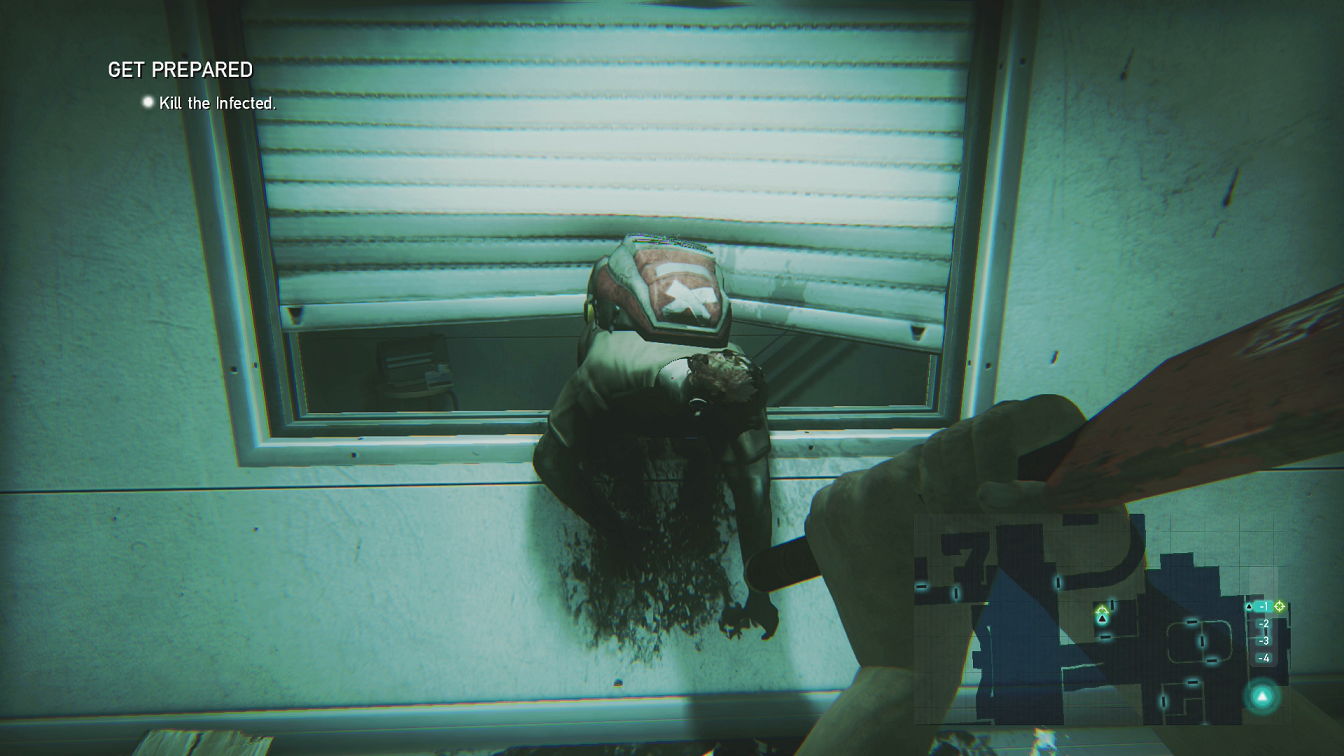 The melee controls are a bit cumbersome and fighting more than one zombie at a time with a cricket bat is awkward, so my first death happened on a milk run to the grocery store. I wasn’t actually picking up milk, and it probably would have all been spoiled anyways. On my way back, some mohawked zombie with lightning around his body screamed, and whenever a zombie screams all nearby zombies must come running, so I was swarmed and killed while scrambling for the exit. My next survivor had to pick up where he left off, and the first order of business was tracking down my dead guy and stealing my/his backpack from the corpse. It’s a dog-eat-dog world out there in zombie London. 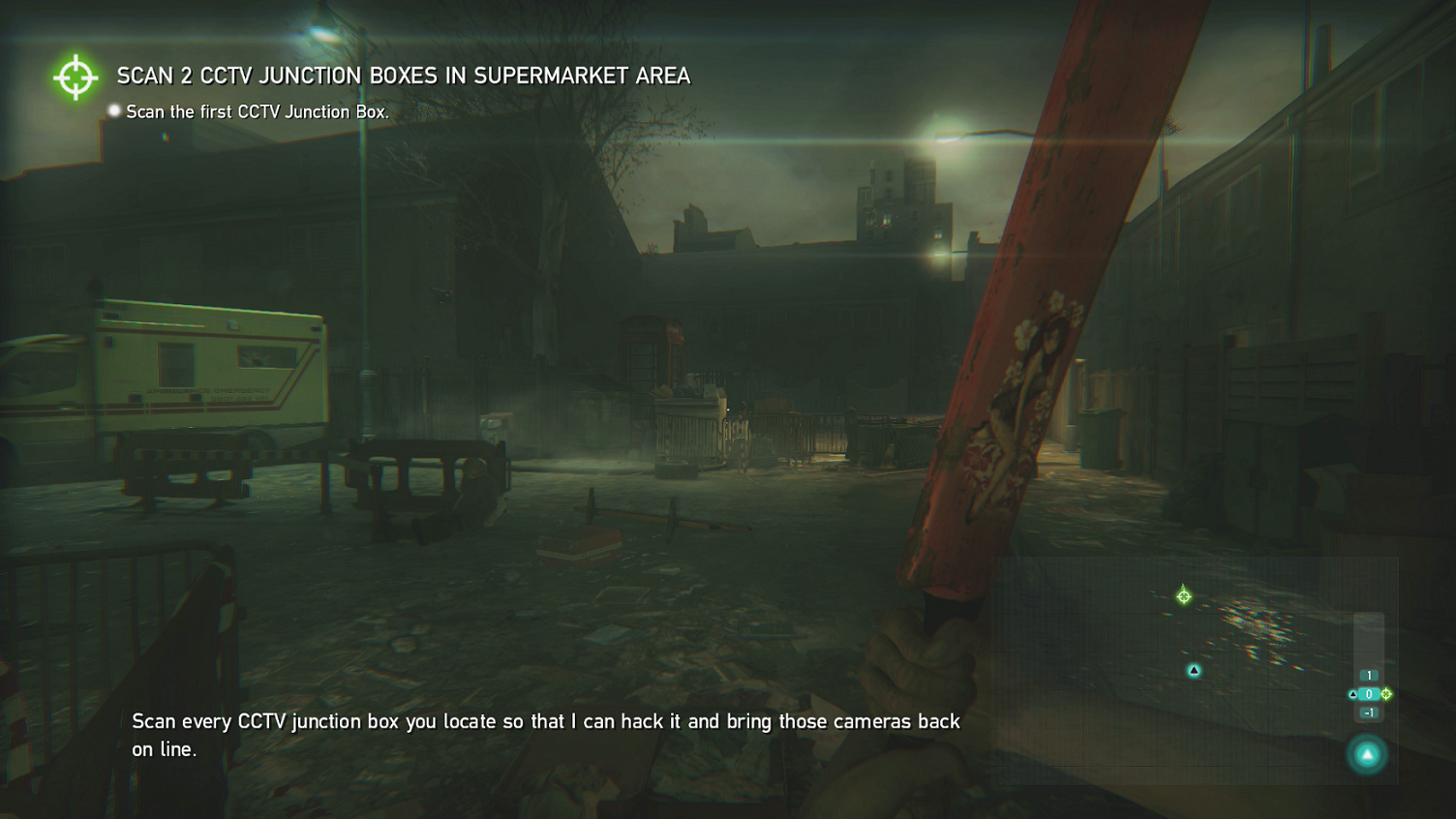 After my first death and accompanying loss of progress since my last checkpoint (around 20 minutes or so), I decided to play a bit more conservatively. I found all of the exits to a building before I entered, in case of a swarm. I didn’t bite off more than I could chew - more than 2 zombies meant a careful retreat so that they could be dispatched safely. The zombies are preternaturally tough, sometimes absorbing four or five headshots before death, so I mostly ignored my firearms and focused on cricket bat mastery. Melee kills also take a while, but at least they are quieter than guns and draw less attention. I also eschewed the use of the flashlight, as the zombies are attracted to it like moths to a flame.

The story is modestly better than most zombie chum, but it’s all so linear and tedious, what with the incessant radio commands, boring protagonist, and fetch quests. No one has much personality except the Prepper, who starts off as a tutorial but eventually transforms into something much more interesting. There are many examples of games with silent protagonists that are nonetheless able to provide an entertaining campaign, such as 'BioShock', 'Half-Life', 'Dishonored', etc., but 'Zombi' doesn’t have that level of charm. It does offer tension and some scares though. Not necessarily because the zombies themselves are scary (although they can be, with their unnaturally large demon mouths and otherworldly vocalizations), but because I desperately wanted to avoid dying, and at any given time I was one failed button press away from becoming dinner. Even taking the irritable controls into account, this is the one part of 'Zombi' that mostly works, and keeps it from being an instantly forgettable Wii U port. Instead, it’s a slightly above average Wii U port. 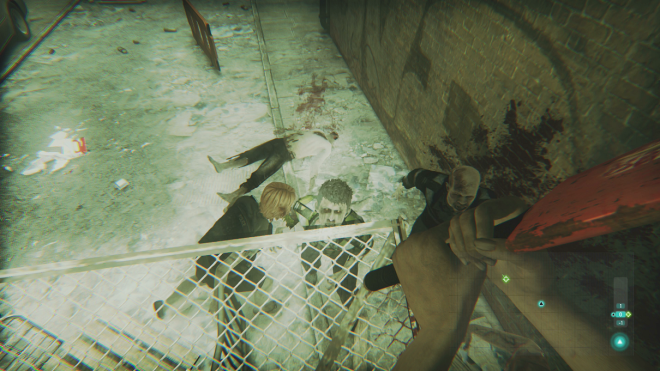 The visuals haven’t changed much from the original iteration. Lighting is frail, black levels are blotchy, and textures are firmly last-gen. The arms of the player look more like glossy wood than skin. Animation bugs are common, such as the strange breakdancing that the zombies tend to perform when knocked prone. The second screen functionality of the Wii U version has been removed, and everything here is on the TV screen . It was a gimmick with the Wii U's gamepad, but kind of a fun gimmick that forced characters to take their eyes off of the screen to manage the inventory. Instead, rummaging through the rucksack means that the game is not paused, and the player is vulnerable to attack. The most noticeable improvement that has been made is in the loading time, which is not perfect but much more reasonable. 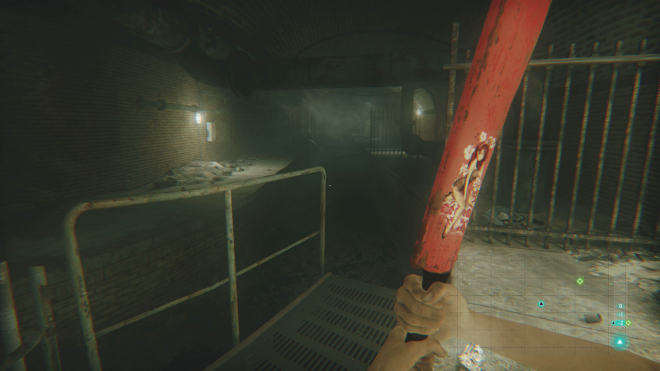 'Zombi' might not look the best, but the sound is significantly better. Music is suspenseful and sometimes vexing in intensity, as though it were challenging me to not get scared. The zombies sound more monstrous than their usual depiction in gaming or film.

The game mechanics themselves promote replays, but not in the usual sense. The save system is sporadic, there are no checkpoints, and sometimes I was a long distance from a save point and needed to turn off the console because real life. The Xbox One’s suspend feature comes in handy here, and without it I would have probably lost quite a bit of progress. All multiplayer functionality has been removed. The only saving grace is an ironman mode, where one death results in a campaign wipe. 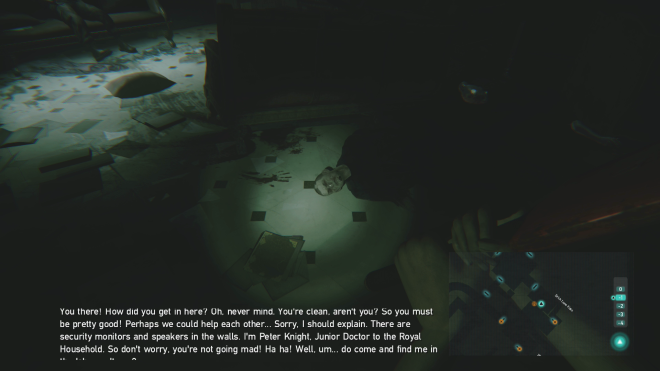 We are firmly entrenched in era of gaming where seemingly every single video game ever is being repackaged, rebooted, remade, or just plain ripped off. 'Zombi' on the Xbox One isn’t a rip-off, but nor did it really call out for a port. It could have been quite content to remain a halfway decent Wii U exclusive forever, but instead we have a flawed zombie game with a few novel mechanics lurking under the surface. It'll be interesting to see if Ubisoft elects to follow up with another 'Zombi' at some point this gen.