The Game Itself
2.5 Stars
The Video: Sizing Up the Picture
2 Stars
The Audio: Rating the Sound
2 Stars
Replay Factor
1 Stars
Bottom Line
Skip It

Steam PC version reviewed. A 360 controller was used for the review.

Choice Provisions was previously known as Gaijin Games and they are probably best known for their 'Bit.Trip' franchise. 'Bit.Trip' is a kind of rhythm platformer and saw a lot of releases on Nintendo consoles, where it was warmly received. 'Laserlife' is also in the rhythm genre, although it is a decidedly different beast.

The first thing 'Laserlife' told me upon startup was that I would need a controller. This was both interesting and mildly inconvenient, the former because this declaration is a rare occurrence in PC games in my experience, and the latter mostly because I had to find my PC controller. Controller in hand, I stared with bemusement and confusion at the 'Laserlife' menu for a while before selecting a "memory" floating underneath a dead, decomposed astronaut with his faceplate smashed out. Then the real confusion started. 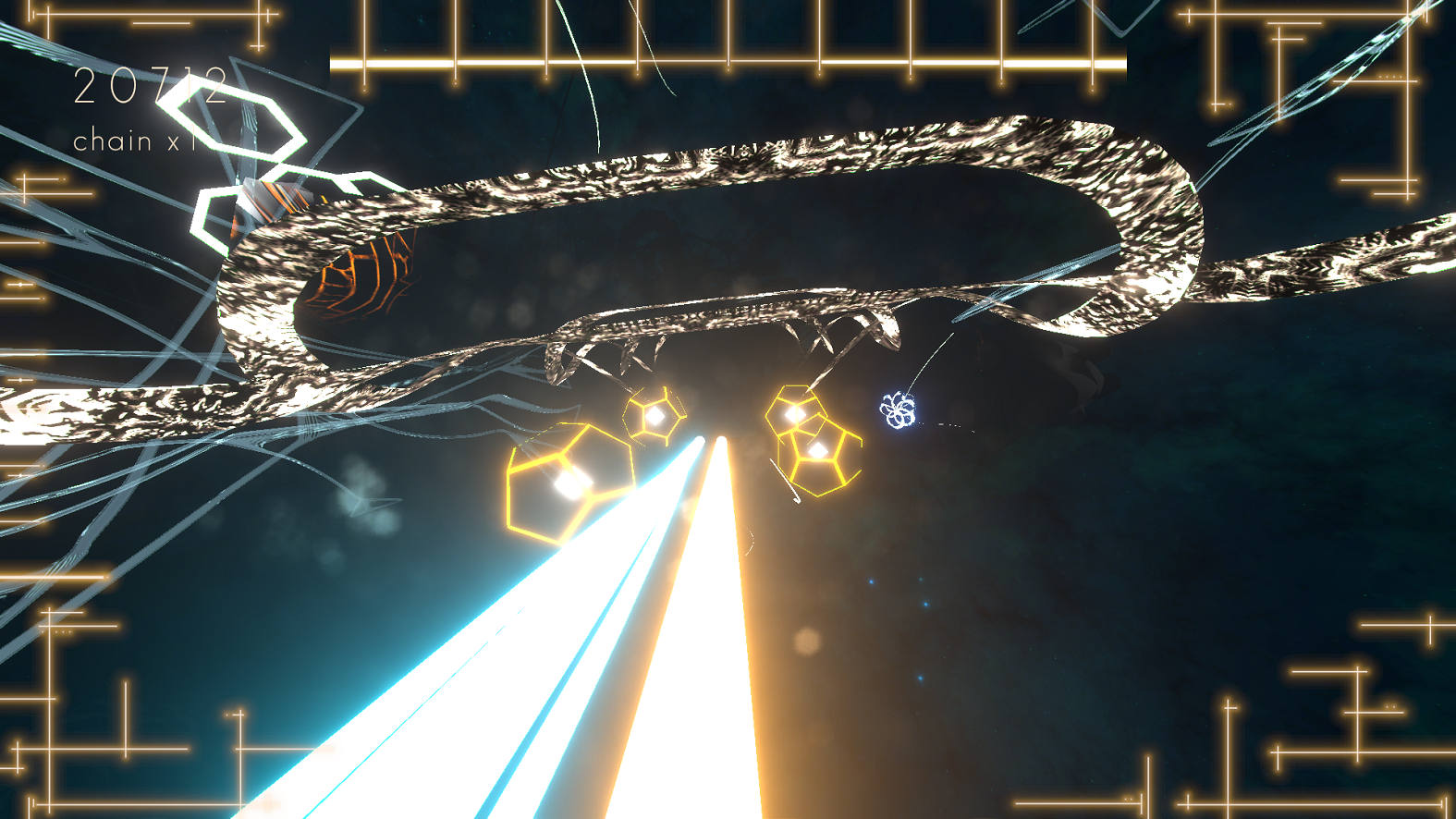 The first level tossed me into the fray of 'Laserlife’s' psychedelic, undulating cadence. Dogs, fish, household objects, and otherworldly flotsam floated around the background and occasionally the foreground. Unrelenting electronic music pulsed along with little circular objects traveling towards me, often in pairs. A pair of squiggly laser beams, one teal and one beige and corresponding to the controller’s thumbsticks, were at my command. The game was light in its explanations, almost cryptic, but apparently I was to move the squiggly beams around the note path, connect with the circular things, and squeeze the triggers at the same time. The circles tended to pulse in time with the music.

I wish there was more, but except for mildly different variations of the beam and circle theme, that is the sum total of what 'Laserlife' has to offer. It is minimalist to the extreme, almost incomplete in its presentation. After the first stage, the second stage of each memory uses a flat circle and there is more up and down movement of the sticks than rotation. The third section is a tunnel of light with angry red triangles stacked on the walls, which must be avoided by the beams of light by sliding them around to openings on the side. The game informed me how I did on each button press from "good" to "perfect!", although I often disagreed with the verdict because the presses did not align perfectly with the tempo. There is also a discordant swishing noise on each press, which does not fit into the music at all and tended to make everything sound messy.

Upon completing a memory, I had to maniacally rotate the thumbsticks in all directions to give the dead astronaut a seizure, and was then rewarded with the still image of a boat or some other non sequitur and an accompanying prosaic sentence. I think that this process is somehow meant to extract memories from this skeletal cosmonaut, but what significance they hold is lost on me. There’s little story to speak of, and I’m not even sure what the player represents in this equation. Am I death? An alien graverobber? The inherent entropy of the void of space? A puzzled gamer, struggling to comprehend this mystifying game? 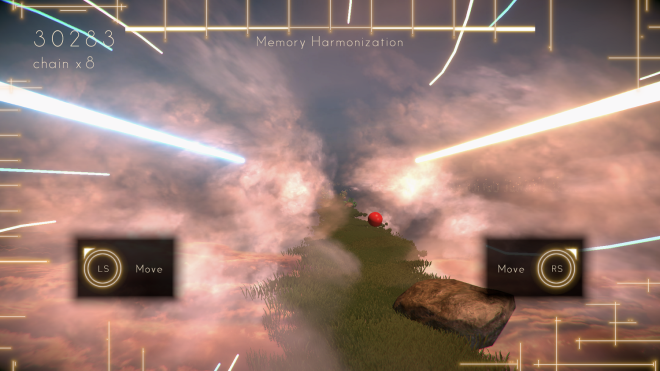 The kaleidoscopic, stormy potpourri of wreckage surrounding the laser beams sometimes looks nice, and other times has weak, grainy textures. The lighting effects are more advanced at least. It is somewhat ironic that the video, with its pyrotechnic qualities, is probably the best part of this rhythm game. The PC version has some issues with framerate stumbling in later levels. One section would drag, messing up my button presses, and then randomly restart with no explanation, leaving me to wonder if my performance or the engine’s was responsible. Like the rest of 'Laserlife', it is a mystery, one that I’m not particularly interested in solving. 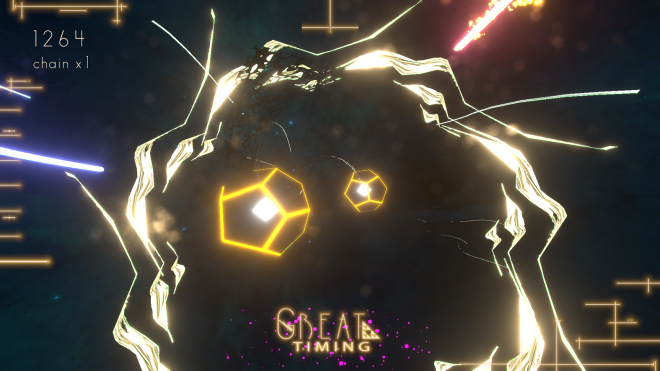 This is the section that any game in this genre really needs to nail, and 'Laserlife' comes up far short. The soundtrack is limited to watery electronica and dance tracks, and in many memories I wasn’t convinced that I was actually listening to different songs. The button presses do not always correspond to the rhythm, and I never felt like I was a part of the music, the hallmark of a good rhythm game.

Memories are not all available from the beginning - each must be unlocked by completing the previous one. As the music is weak, the story is nearly nonexistent, and the philosophical overtones are undeveloped, I wasn’t particularly compelled to continue unlocking everything. 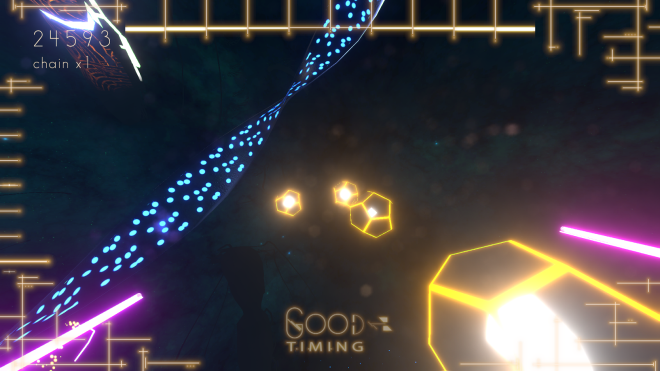 'Laserlife' may have been successful as a tech demo of some kind, perhaps showcasing a new style of music game or abstract take on exposition in gaming. As a final product, it is woefully incomplete. It could have been more, perhaps with clearer writing, a stronger soundtrack, and precise gameplay. Even if it had those traits, it would still struggle, as the gameplay never really shines, despite its hypnotic qualities.