The Game Itself
3.5 Stars
The Video: Sizing Up the Picture
4 Stars
The Audio: Rating the Sound
4.5 Stars
Replay Factor
4 Stars
Bottom Line
Recommended

Dragon Quest Heroes: The World Tree's Woe and the Blight Below

Outside of Japan, being a Dragon Quest fan has been a painful experience. Square Enix has been releasing spin-offs, remakes, and ports of the popular JRPG left and right, but none of the seven 3DS titles have had so much as a localization announcement outside the Land of the Rising Sun.

Thankfully, Omega Force has heard the laments of the fans, and have worked with Square Enix to bring the exceedingly long titled 'Dragon Quest Heroes: The World Tree's Woe and the Blight Below' to Dragon Quest starved audiences. However, this isn't the typical JRPG that the series helped to create; instead, players get to experience an Action RPG with a fair injection of the 'Musou' genre, made famous by Omega Force's own 'Dynasty Warriors' series.

'Dragon Quest Heroes' starts off innocently enough, with humans and monsters living in harmony. However, the situation quickly turns dire as a mysterious force turns the monsters on their former friends. As such, King Doric and the Captains of his guard travel the world, trying to minimize the damage caused by this critical event, as well as find help from familiar faces. 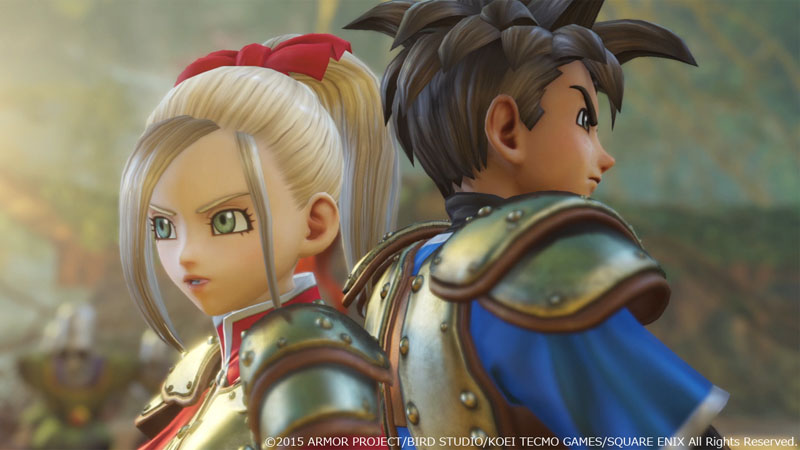 Honestly (and possibly expected), 'Dragon Quest Heroes' storyline is a bit on the weak side--after all, that isn't quite the point of this crossover game. The original characters have rather one-dimensional personalities, and most conversations repeat jokes that may have been funny the first few times, but eventually start to grate. The characters from other Dragon Quest titles are relatively interesting (and it's great to see characters from earlier games in HD with voice acting), but they are ultimately unimportant to the overall plot.

That is fine, though, as where the plot fails, the gameplay succeeds. Many might expect this to be a full-on Musou title, much like The Legend of Zelda spin-off 'Hyrule Warriors', but 'Dragon Quest Heroes has a healthy amount of RPG mechanics thrown in to make the title feel more like an Action-RPG. There are still a large amount of monsters to hack and slash through and a variety of flashy moves to do it, but 'Dragon Quest Heroes' manages to sidestep many of the tropes that Musou games tend to fall prey to.

Instead of wielding a single character as they bulldoze over all competition, players control a four man party, allowing for some variety in how to tackle scenarios. Additionally, the focus of missions is often on protecting some sort of entity, as opposed to taking enemy camps. These differences may not seem big, but they have a large effect on how missions are tackled. Overall it's pretty fun, and although the beginning is a bit on the easy side, the difficulty ramps up as the game continues on. 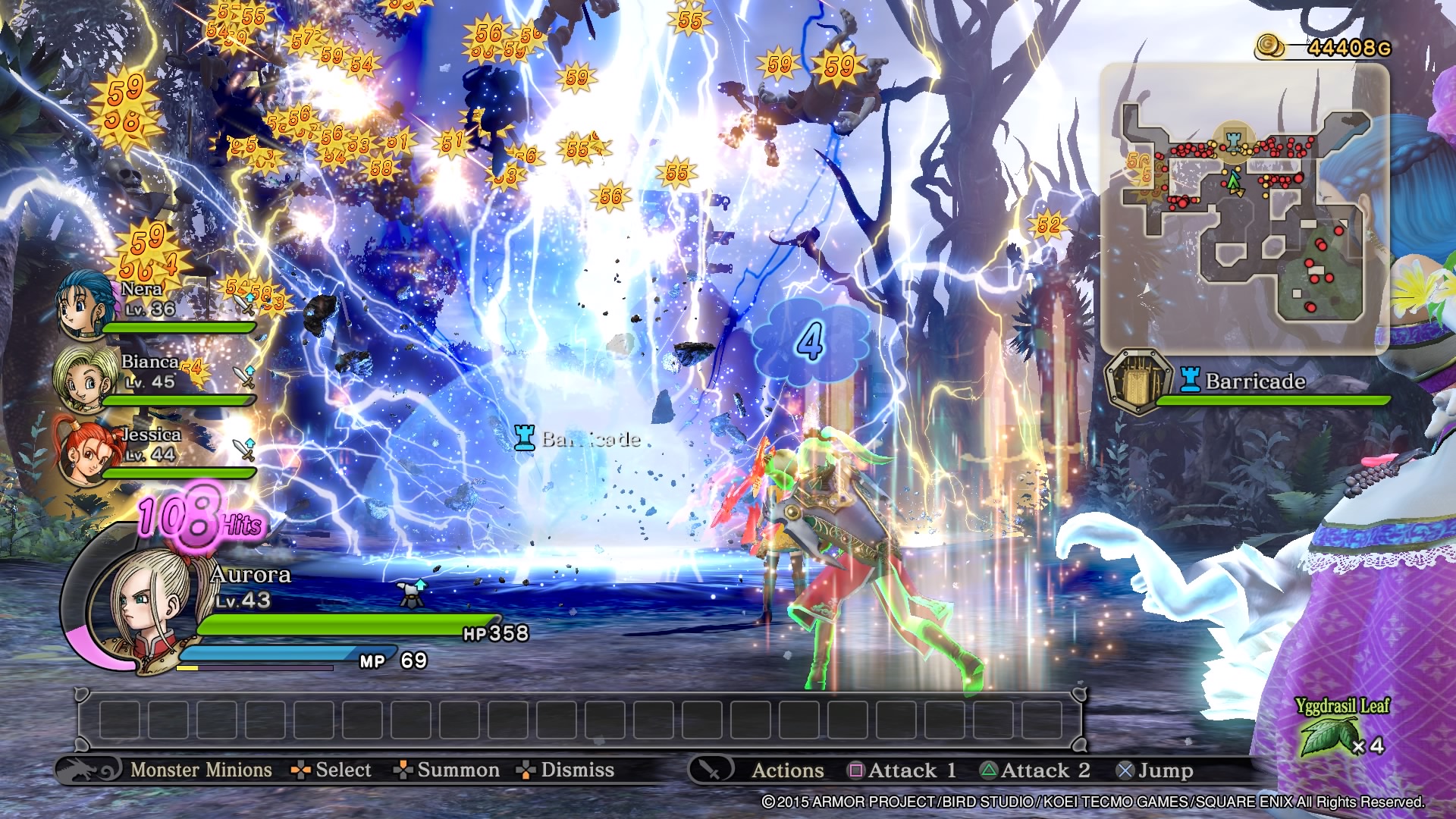 Battles themselves strike a good balance between making players feel powerful and providing an actual challenge. Taking down small fry is easy in one or two hits, and doing so is quite satifying, especially when an AOE attack is used to clear them out. But, at the same time, larger enemies will also appear, and trying to tackle them with brute force will get your party knocked aroung, and susceptible to even the weakest of attacks. It's a system that requires more than brute force to succeed with, but also doesn't make fights so arduous that fighting smaller enemies is tedious.  To put it simply, it's a lot of fun.

There is also something to be said about 'Dragon Quest Heroes'' nostalgia value. Everything about the game oozes with the series' personality, from the silly accents to the pun-filled monster names to the constant throwbacks to other games. While the title is certainly playable by all, as the story is completely stand-alone, there is that added bonus for Dragon Quest fans that is sure to please.

But, it's important to note that there are a few flaws with this package. For the sake of nostalgia, some archaic and downright frustrating mechanics have made it into the final product. Waiting for jingles to finish becomes annoying, especially when trying to do multiple tasks in the home base; only being able to buy one item at a time is tedious; managing any sort of inventory is a nightmare; watching the alchemy pot bubble and broil makes creating accessories is a trial in patience. Most of the issues are pretty tame, but their annoyances slowly add up over the game's playtime, and even the most diehard fans will be wanting a way to speed up the process a bit.

But, 'Dragon Quest Heroes' is solid where it counts, in the gameplay, and the nagging issues while trying to accomplish stuff in the home base shouldn't deter players on the fence about trying this title out. 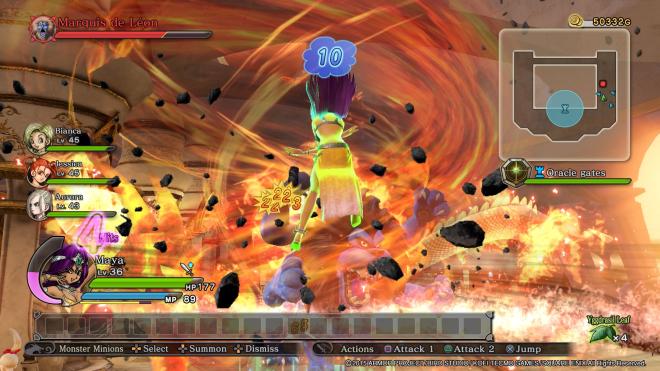 'Dragon Quest Heroes' is quite the looker. Seeing Toriyama's art on the big screen and in HD is great, and it can even be hard to tell that this PlayStation 4 title was also on the PS3 in Japan. Characters and monsters alike are bright and colorful, true to Dragon Quest form. In battle, skill and spell effects look great, and it's downright fun to see the destruction that your party inflicts on the foes around them. Oddly enough, the only time the game seems to noticeably stutter is in the home base, which can be a bit annoying, but doesn't do much to actually affect the game itself. 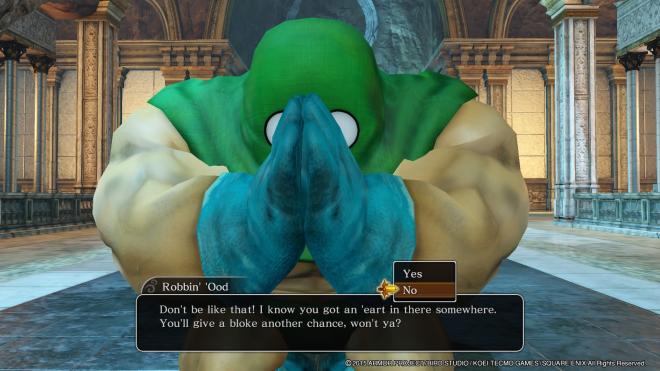 The Dragon Quest series is well known for its solid, sweeping soundtracks, and 'Dragon Quest Heroes' if of course no exception. Then again, the game might be cheating a bit. This spin-off pulls tracks from various other Dragon Quest titles, and gives them a faux-orchestral tune-up. The result is great, and hearing old battle and overworld themes amped up from their original 8-bit and 16-bit origins is wonderful. The only complaint is that the actual tracklist is a bit limited, so players will be hearing the same tracks relatively frequently.

The voice acting is also pretty good, with characters having the absurd accents that the later series entries are known for. Players less tolerant of cheesy voice acting might find the acting a bit grating, but it's silly and doesn't take itself too seriously, and is representative of most of the Dragon Quest series in and of itself. 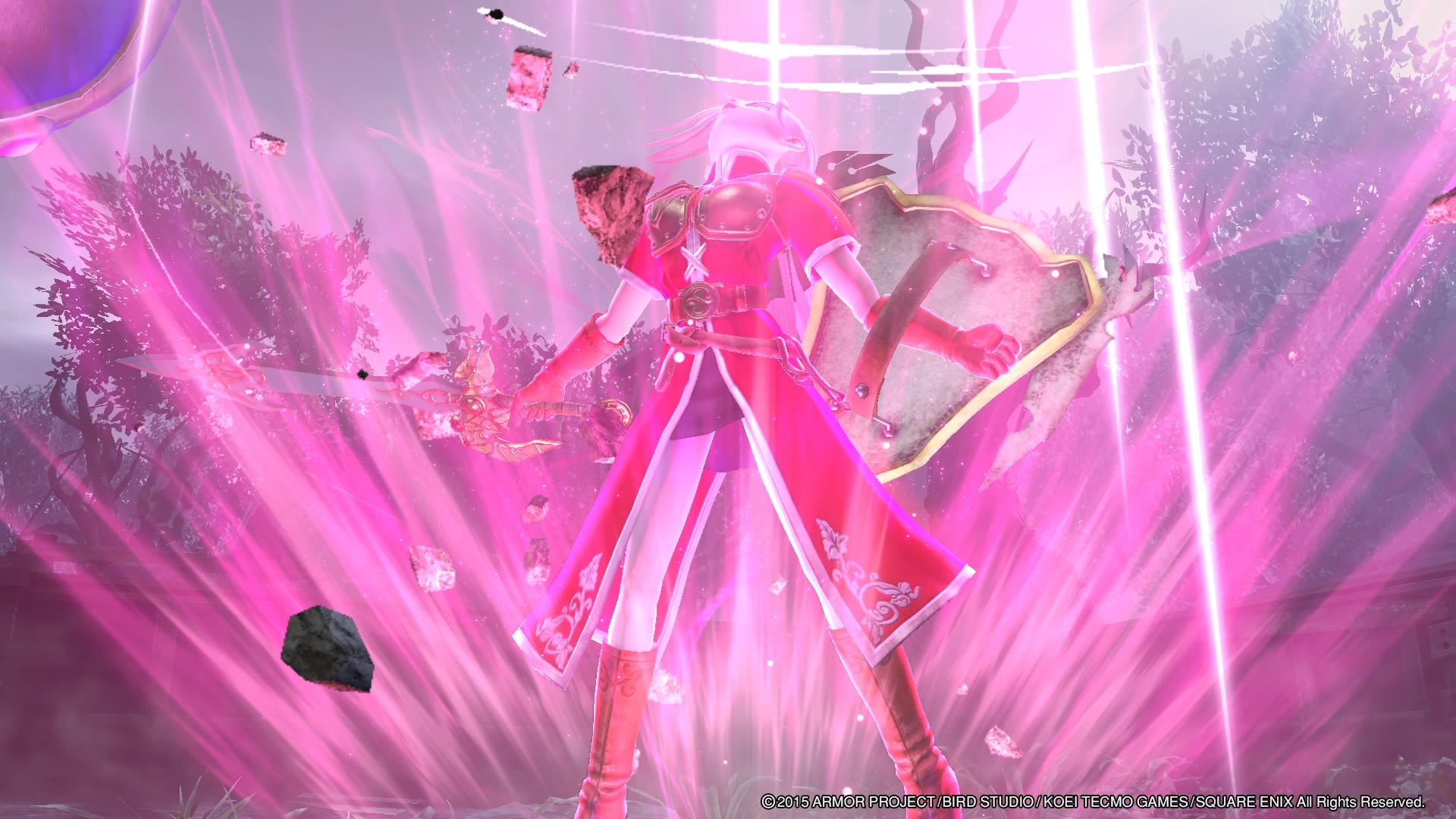 Like any Musou title, there's plenty to do after the game's main story is complete, though admittedly 'Dragon Quest Heroes' isn't as jam packed with content that most games of the genre. Once the main scenario is beat, there are extra sidequests and boss re-matches, and these require high character levels and true strategy to beat. There's also a wide range of trophies and items to collect, and the DLC bosses from the Japanese version of the game are also included on the disc. So while there aren't separate storylines to work through, the extra content and New Game+ will keep most players busy for a while. 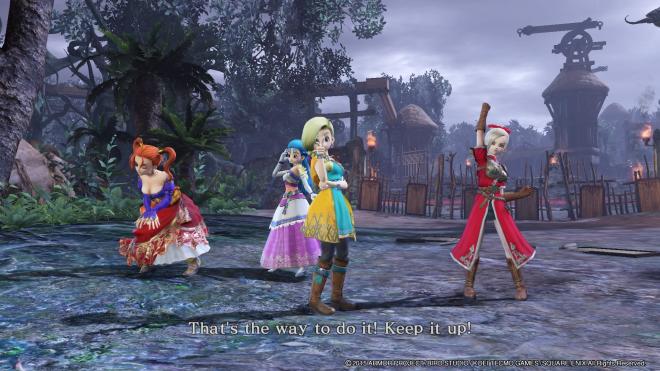 'Dragon Quest Heroes: The World Tree's Woe and the Blight Below' is not a perfect package. There are some flaws with the overall nature of the game that keep it from being a truly great experience, and as such not everyone is going to have the patience to deal with some of the title's issues. Despite that, though, this game is rather solid, and if you're interested in either Musou titles or Action RPGs, 'Dragon Quest Heroes' is sure to be an enjoyable experience. All of this enjoyment value is increased exponentially for 'Dragon Quest' fans, too; it's been quite a few years since the last localize Dragon Quest title after all, and it's a good game to boot!