'Plague Inc: Evolved' is a disease simulator that has been in Steam’s Early Access since early 2014. It is a remake of 'Plague Inc.', a 2012 mobile game, and includes all the expansion packs that were released for the mobile version. Technically, the Xbox One version is the only one in full release, as it remains in Early Access on PC as of the time of this writing. All versions of the game are very similar to 'Pandemic', a Flash game developed by Dark Realm Studios.

'Plague Inc: Evolved' is a real-time strategy game where the player takes the role of a virus, bacteria, parasite, or other nasty little critter. The critter’s sole purpose is to destroy all human life on Earth. Sounds pleasant, right? It is a game of strategic biological genocide. It might sound awful, but it’s actually a deep, engaging strategy experience. You don’t have to watch people die horribly in the streets or anything - all of the action is represented via menus and numbers.

Each plague starts out very weak, with no abilities to its name. I would select which country to condemn first, then a patient zero would be stealthily infected. After that, evolving, developing, and moving the disease was all on me. Each class of plague has its own set of abilities based on its lifestyle, as you might expect. Fungi have a difficult time moving around on their own. Viruses evolve wildly and can be difficult to control. Parasites are easier for humans to detect, and so on. Although there are differences from real life disease for the purpose of gameplay or game development (true parasites, for instance, typically want to keep their host alive for as long as possible), the game’s infection model is accurate enough that the CDC has commented on it. 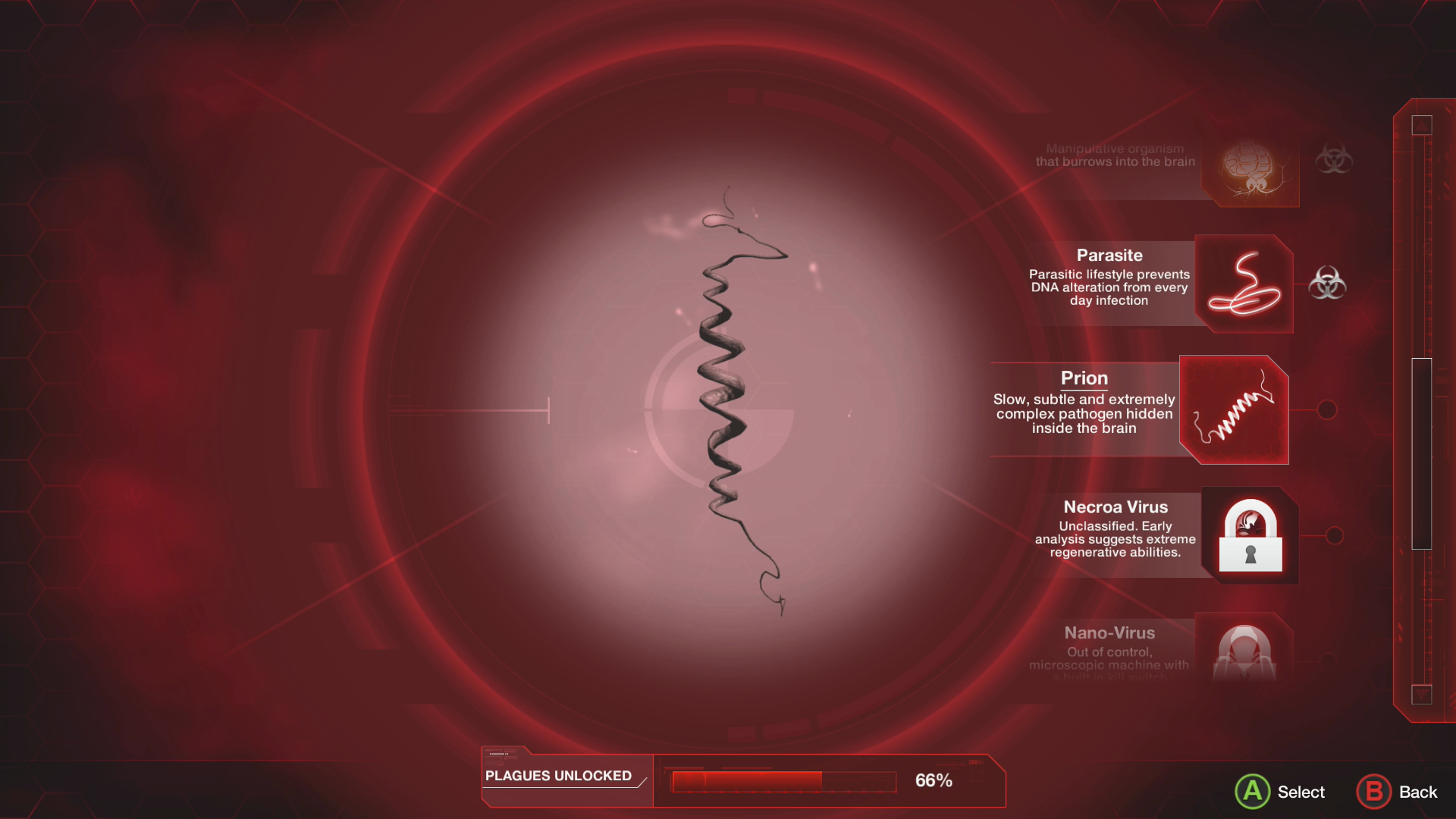 Most playthroughs are pretty slow in the beginning. Evolving horrible symptoms too early, like internal hemorrhaging or pulmonary edema, will alert doctors to a public health crisis. Governments will in turn direct their research centers to focus exclusively on a cure, stopping the plague before it can infect a large number of people. The key for most diseases is to slowly evolve infection vectors like blood, birds, and insects before selecting any symptoms. That permits the plague to move freely around the world and remain undetected by humanity. Each country is different - Canada is both cold and wealthy, requiring diseases to have cold and drug resistances to spread quickly. Most of Africa has a thin medical infrastructure and poor surveillance, making it easier for all diseases to thrive there. Once everyone was infected, I was free to ratchet up the lethality with terrible symptoms and watch the humans scramble hopelessly for a cure before they all perished. 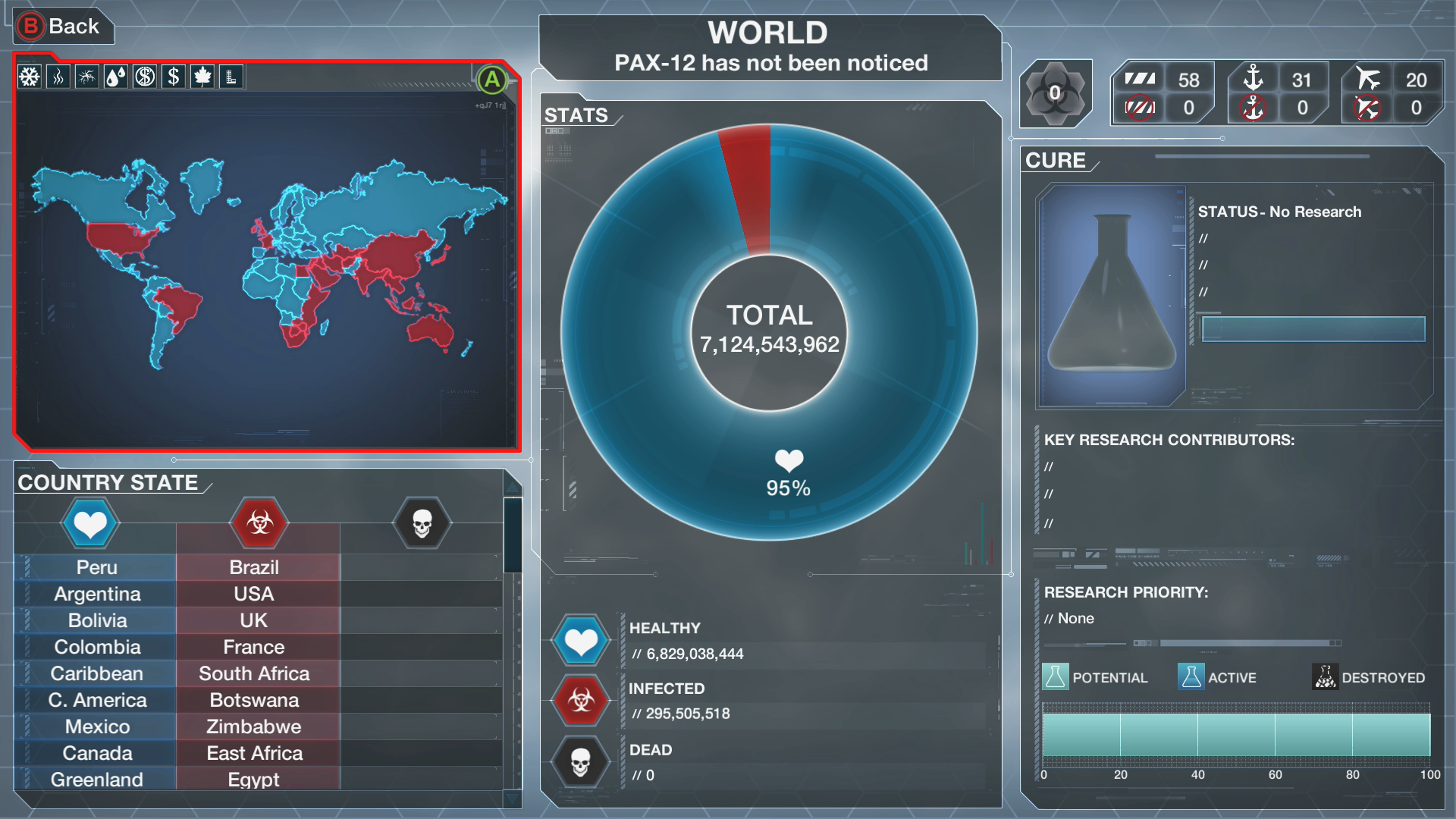 While all of the diseases are different, some are more so than others. The virus and bacteria have much in common, while the bio-weapon is essentially a time bomb that is perfectly capable of wiping itself out before everyone can be infected. This requires careful management by the player to avoid a fast burnout. The necroa virus is the most unique of them all. It is a plague that starts out rather benign, with symptoms like excess salivation and distant thoughts of autophagia (eating one’s own tissue). Once the virus has evolved enough, the dead can be resurrected and feel compelled to eat the living - zombies. The zombies themselves can be improved through manipulation of viral DNA. They can become faster, stronger, spit poisonous bile, and even group themselves into massive mobile hordes that I could direct across the planet. In necroa games, a cure is worthless, and instead the humans attempt to defend themselves with an organized military force called Z-Com. Z-Com actively fights zombies in their countries, so I would evolve particularly tough zombies and then move them across borders via horde to overwhelm Z-Com bases. The virus can also evolve reanimation, allowing me to use dead humans as weapons. 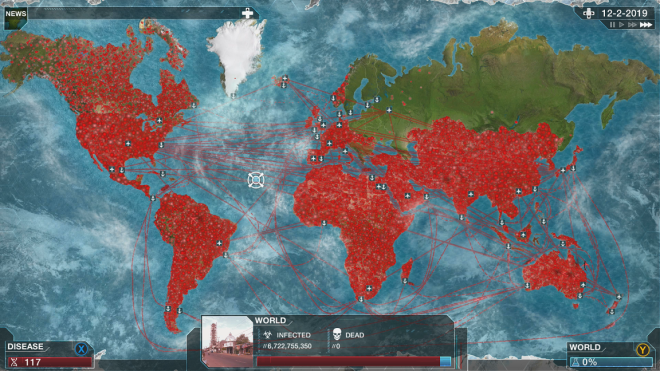 This is a menu-intensive game, and as a result you’re not going to see any impressive visuals or the like. Most of the time I stared at a global map, watching little planes and ships make their way around the planet, unknowingly spreading my diseases. Probably because of its origin as a mobile game, 'Plague Inc: Evolved' is a small download, has few engine problems, and very short load times. Its controls have been optimized for console, which just means that DNA bubbles can be popped with a subtle thumbstick movement instead of using a touchscreen. 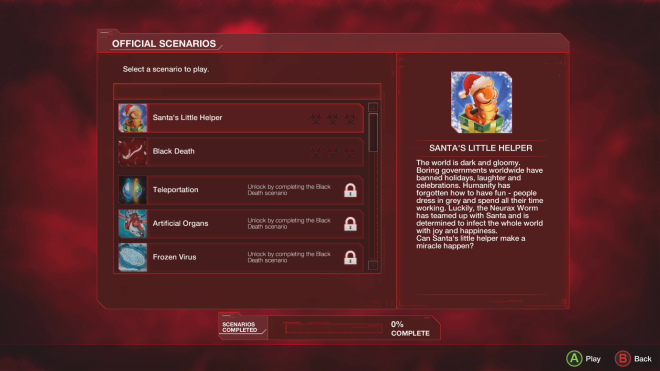 The sound in 'Plague Inc: Evolved' is minimalist. The light piano score is accompanied only by sound effects whenever a DNA bubble is created, and the occasional ambient noise (ambulance siren, heart monitor, etc.). The soundtrack is sometimes chipper, but always creepy.

The main game itself can be challenging, and on the higher difficulty levels it starts to hurt. People wash their hands properly, the sick are quarantined, governments require perennial blood tests of all citizens, and so on. More diseases and genes are unlocked with each successful genocide. There is also a scenario mode not unlike something you might see in a 'Civilization' game, where specific diseases or circumstances have been set up for players to solve. The first of these is the black plague, re-introduced into the modern setting with particular symptoms and a high lethality. 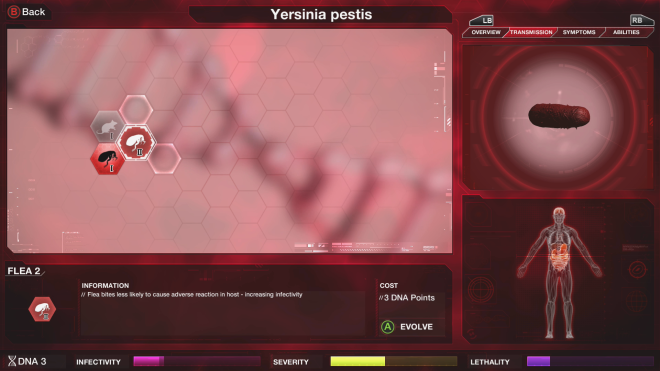 'Plague Inc: Evolved' is a simulator and can therefore be sometimes dry, but it is also a different take on the strategy genre. There is a fascination and a challenge here that is purely strategic in its appeal. For strategy fans who have never experienced any of its previous incarnations, I recommend it. For those who have already enjoyed it, this is pretty much a port and there isn’t much new content to be had.