The Game Itself
4 Stars
The Video: Sizing Up the Picture
3.5 Stars
The Audio: Rating the Sound
4 Stars
Replay Factor
3.5 Stars
Bottom Line
Recommended

'Castle Crashers' was one of the darlings of the Xbox LIVE Arcade program during its heyday. The combination of furious Flash art and a deep take on the beat 'em up genre took hold with online and local co-op being the star. It was much played and much loved upon its release in 2008, and was eventually ported to the PS3, Windows, and OS X. The remaster has been in the works for about a year, and was announced by Microsoft at this year’s E3.

'Castle Crashers Remastered' is a beat 'em up; a side-scrolling arcade-style brawler in the mold of classics like 'Battletoads' or even 'X-Men'. Colorful little cartoon knights jump and dive around the screen, slashing and bashing barbarians and thieves in their quest to defeat an evil sorcerer and free the king’s kidnapped daughters. There is an RPG element as well - the knights earn experience by defeating enemies, which can be used to purchase upgrades in offense, defense, agility, and magic power. There are many knights, each with different abilities. 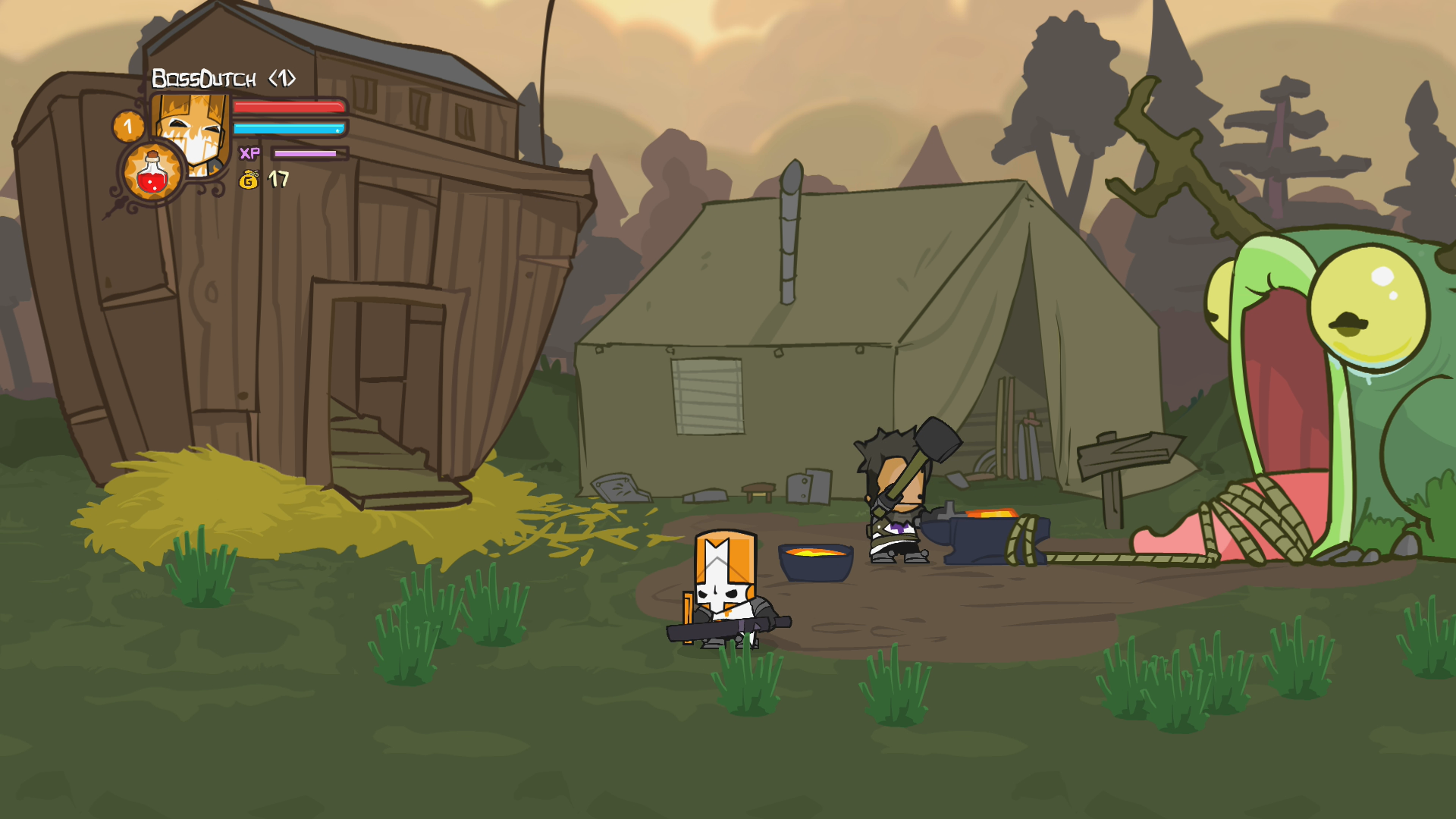 Characters can be further customized by the choice of weapon, from standard swords to maces to giant lollipops. Weapons can change stats, as do the floating animal orbs that can be found in the levels. Little elephants, giraffes, cats, and more follow the player and add passive buffs. Magical powers start out rather weak, but with every 6 or so points that went into the magic stat, I gained more applications of the power. I prefer the orange knight, who has a fireball attack. 'Castle Crashers Remastered' contains most of the DLC from the original, so there are double the number of starting knights, and many more can be unlocked via gameplay instead of real life money purchasing.

As characters grow more powerful, they can use increasingly complicated combos. Mashing the X button for a line of weak attacks is not particularly effective, but string together some lights, heavies, jumping, and bow attacks, maybe a little magic, and you’ve got a stew going. More items and animals can be purchased with money picked up from fallen enemies. In between each stage, I was able to duck out to a store, blacksmith, and my very own animal ark to swap out equipment and companions as desired.

Developer The Behemoth has a distinctive storytelling style, and 'Castle Crashers' is not unlike 'Alien Hominid' or 'BattleBlock Theater' in that regard (although 'BattleBlock' is somewhat narrated). It’s cutesy and campy and includes copious toilet humor, all used to great effect. The story is very light and is mostly relegated to the background, where the kidnapped princesses can be seen being carried away by brigands while the heroic knights are waylaid by gobs of baddies. Huge bosses pop up periodically, each with massive health bars and lots of added enemies swarming around at their feet, harrying me as I attempted to kill their leader. The game can be challenging when played alone as there are so many enemies at one time. Playing with partners makes the fighting more manageable, and knights can resuscitate each other when necessary. 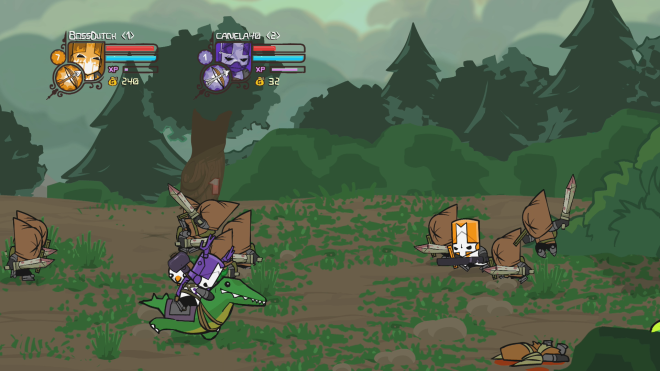 The original 'Castle Crashers' is very cartoonish, with bright colors and sharp edges that give it a glossy, colored pencil kind of look. This remaster has been given a pixel upgrade of around 5X, which is definitely noticeable. The characters look as great as ever with their animation, but the difference is most dramatic in the backgrounds, which don’t look quite as cheap or fuzzy anymore. Icons are also clearer. The framerate has been doubled to 60, and the controls respond extremely well. 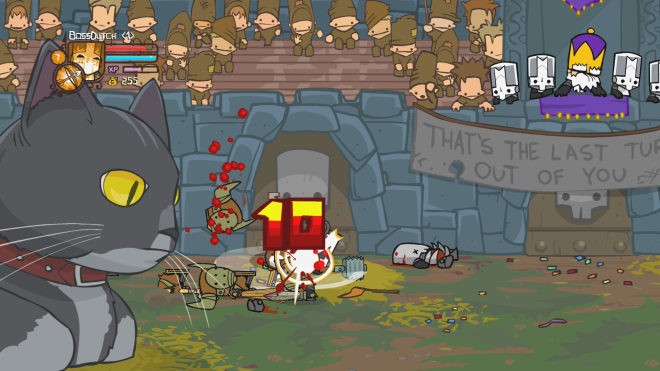 A cheeky melody is always present in the background, sometimes cut with faux epic fantasy tracks or thumping bass lines. Like the visuals, it serves to give the game a playful ambiance. The sound effects are a cross between 80s action movie scenes and what I imagine a comic book fight would sound like, with lots of thwacks and pows. Voice acting is kept to a minimum.

The campaign is pretty large and invites replays, what with all of the unlockable characters and such. Like the other modes, it is available in up to four-player local and online co-op, which is far better than playing by yourself. The Behemoth claims that matchmaking has improved, but I had difficulty finding matches and would often spend several minutes looking for a single friendly knight. As the game isn’t that old yet and should still have a decent playerbase, I am skeptical about the matchmaking.

An arena is included as well for multiplayer, and can be both cooperative and competitive. It is basically a horde mode of successive waves of bad guys. The odd All You Can Quaff button mashing minigame has been replaced with the new Back Off Barbarian mode, which is still button mashing but in a more controlled fashion. Each level consists of a grid filled with colors and arrows corresponding to the Xbox face buttons. I had to navigate around the board, one button at a time with colors constantly changing, while avoiding enemies doing the same thing. Honestly, it’s kind of lame. It’s better than All You Can Quaff, but that’s not saying much. 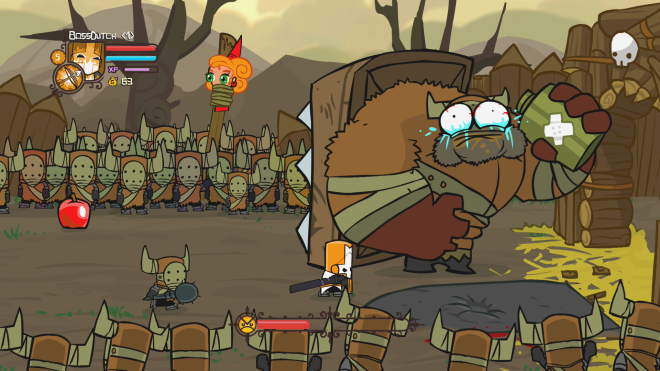 Perhaps the constant stream of remakes has jaded me, but 'Castle Crashers' didn’t seem to be screaming for an update, especially with backwards compatibility right around the corner. The new mode is wishy washy and the jury is still out on the matchmaking. Still, the $5 price for previous owners of the game, there are far worse old-timey arcade brawlers out there than 'Caste Crashers Remastered'.