What started on PC with Crytek, long ago became a series of first-person view titles that put the player in a world that was a 'Far Cry' away from a modern day big city. Over the years, vehicle and weapon variety has ballooned while hunting and crafting has become a big part of the single player. And yet, the huge Ubisoft series has been malleable enough that going prehistoric almost seems logical. So comes 'Far Cry Primal.'

'Far Cry Primal' was developed by Ubisoft Montreal, one of Ubisoft’s largest divisions, and one that also works on the 'Assassin’s Creed' and 'Rainbow Six' franchises, among many others. 'Primal' is the first 'Far Cry' title since 'Far Cry 4' and constitutes its own unique entry in the series.

The 'Primal" experience is very different from a typical 'Far Cry', and indeed most shooters in general. Because of the prehistoric setting, these cavepeople have no guns or explosives - their most advanced projectiles are flint-tipped arrows fired from simple wooden bows. There are a few anachronistic gadgets, like a grappling claw and bee bombs, but even these only serve as distractions. For the hero/hunter player character, Takker, all of the foes must be dispatched at relatively close range, either by his own hand or the actions of his animal buddy.

The limited equipment selection is a blessing instead of a drawback. Combat has been distilled down to a raw, visceral form. Often while playing 'Far Cry 4' my eyes would glaze over while I looked over the huge list of weapons, paralyzed by indecision, but my selection always included the bow and throwing knives. Those skills come in handy here. Enemies are made challenging through their sheer numbers and also a large amount of chieftains, who use resilient bone armor and heavier weapons. Another side effect of the weaponry is that nearly everything is quiet, so stealth has more options. 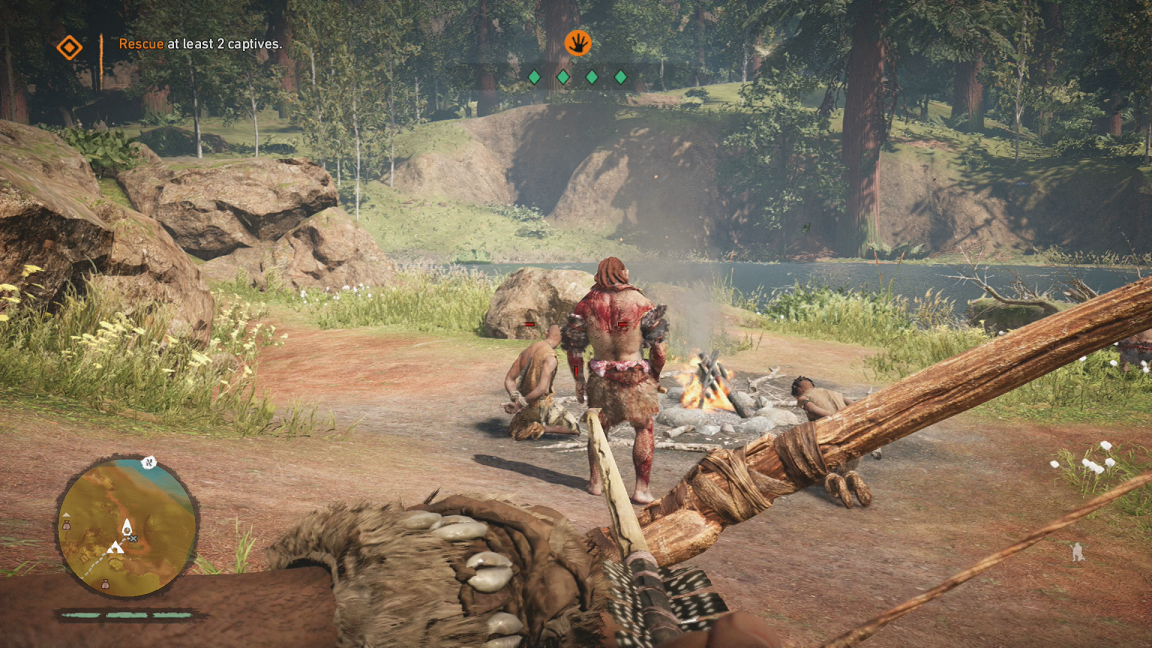 There are over fifteen creatures to be tamed throughout Oros, each with its own stats and abilities. Jaguars are stealthy hunters, dholes help me gather crafting materials, and bears are the prehistoric equivalent of a battle tank. I can be accompanied by one beast at a time, and they can be summoned and dismissed at will, being safely stored in a collection of sorts when not being used. The animals are tough and it is easy to revive them should they fall in battle, making them Takkar’s most versatile and efficient weapons. I was given the use of a great horned owl that could be directly controlled to scout out enemy encampments and even drop bombs on their unsuspecting inhabitants. Some of my best experiences were when I was creeping through the brush behind an oblivious animal with my trusty leopard crouched beside me, or ordering a cave bear to charge the front gate of a camp while I took potshots at the confused villagers from their flank.

Almost all of Takkar’s advancement is conducted through the village. The specialists he collects throughout Oros unlock new skills and crafting recipes, and when their huts are upgraded, they can offer even more. The map is chock full of crafting materials, from trees and rocks to rare furs found on wily critters. These are used for routine crafting like Takkar’s weapons and cold weather armor, but also expensive purchases like enhancing the cave. The open world is covered in normal 'Far Cry' things that have been given a coat of tribal paint, like camps and bonfires (converted from outposts and radio towers), but I often found myself distracted by the environment. I had a blast running from one place to another, hunting animals, playing around with potions and bombs, and helping out random Wenja, and when I finally reached my next objective, an hour or two had passed without my noticing. Not unlike 'Dying Light', the nighttime in Oros is more dangerous, with powerful predators prowling the hills and plains.

Despite the strengths in its gameplay and content, the storyline in 'Primal' leaves something to be desired. Takkar is not a silent protagonist, but nor is he particularly interesting. He is usually content to be directed from one mission to the next without expressing an opinion or doing much communicating at all, while his comrades give impassioned speeches about the plight of the Wenja. The other tribal leaders are usually a caricature of some kind, often depicted as unstable, particularly the medicine man. The most compelling character is the Udam leader Ull, who brings an element of compassion to his people’s barbarous ways. This is perhaps unsurprising, as the series usually has more luck with its villains than its heroes. Still, several of the supporting characters are entertaining, like Wogah the crazy hermit who provides some slapstick humor. 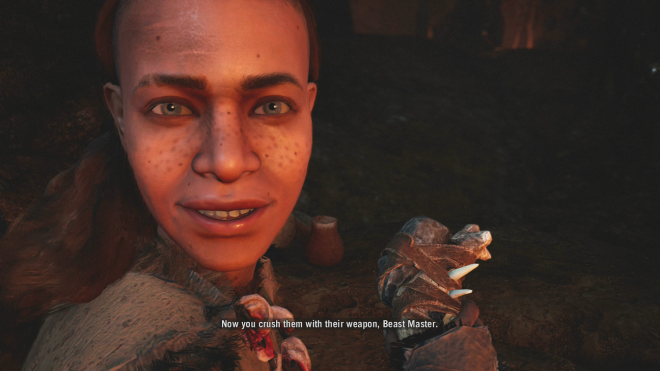 The Dunia 2 engine maintains the pleasant standard set by prior titles, but some advancements have been made in the weather system and day/night cycle. Motion capture has seen some serious improvements. The tribal art design, such as the cave paintings, tattoos, bone armor and so on, is lovely. Performance is nearly perfect throughout the campaign.

There is a lot of familiarity in the menu, HUD, animations, and other trappings, but 'Far Cry Primal's setting makes it a worthy standout for the franchise. It adds some freshness to Ubisoft's blueprint, and it doesn't hurt that prehistoric games are pretty uncommon. I still had to keep an eye on ammunition and other resources, but everything I needed was always within arm's reach, in the environment itself. 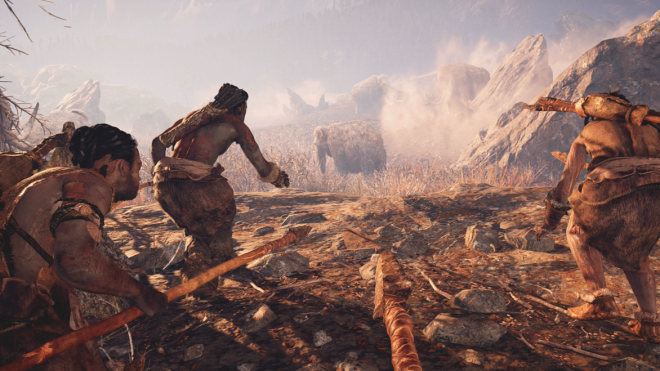 The entire game uses specially made tribal dialects and is subtitled in the language of your choice (from a decent list). The dialects sound suitably caveman-esque and add to the immersion. The score, from 'Tomb Raider' and 'Dead Space' composer Jason Graves, is heavy on the drums and very appropriate for a game set 12,000 years ago.

'Primal' is single-player only, and has a lot to do. The campaign is a bit shorter than previous 'Far Cries', but the open world makes up for it with its abundance of worthwhile activities. There are fires to be lit, rival encampments to be eradicated, and resources to be collected, and little side missions sprouted up everywhere while I was running around. The far north of Oros adds a wrinkle with its extremely cold weather and more powerful critters. In addition to Takkar’s normal collection of animals, there is a set of late-game Beastmaster missions that feature even more powerful creatures to be tamed. 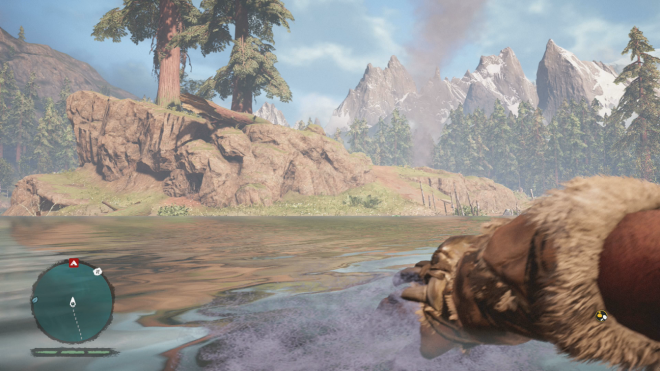 'Far Cry: Primal' doesn’t reinvent the wheel, but it does have addictive caveman gameplay and a fascinating sandbox to play around in. It does feel like a 'Far Cry', but the setting makes it something new and special. Just like 'Blood Dragon', I find these off-year or "side" releases in the series to be the most fun, although the series' core formula is still captivating.