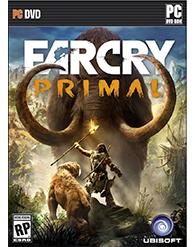 The award-winning franchise that stormed the tropics and climbed the Himalayas now brings its innovative open world sandbox gameplay to a time when humans were not at the top of the food chain but were fighting to climb it, bringing together massive beasts, breathtaking environments and unpredictable savage encounters.

Gamers play as TAKKAR, a seasoned hunter and the last surviving member of his hunting group. Arriving in the majestic and savage land of Oros, players will pursue one single goal; survive in a world where humans are the prey. They will meet a cast of memorable characters who will help them push back and tame the dangers of the wild. Players will journey as the first human to tame the wilderness and rise above extinction. Along the way, they will have to hunt for food, master fire, fend off fierce predators, craft weapons and tools partly from the bones of slain beasts and face off against other tribes to conquer Oros.