The first 'Elite' game, released in 1984 for the Acorn Electron home computer, was hugely influential and one of the industry’s first open world titles. There have been several sequels but nothing for the last twenty years or so, until Frontier Developments, helmed by the original game’s creator, funded a Kickstarter in late 2012. 'Elite: Dangerous' was released in 2014 for PC and spent some time in the Xbox One Game Preview program before it was given a full release on the console.

'Elite: Dangerous' is a spaceflight simulator set some 1,300 years in the future. Humanity has spread outwards in all directions from Earth, colonizing every habitable planet they can find, as well as some not-so-habitable planets. Over such a vast range of human activity, law enforcement is spotty at best, and in many star systems it’s like the old West, lawless and full of merchants, bandits, villains and the occasional hero. Pilots can make their living as government-sponsored privateers and enforcers, turn to a life of crime as smugglers or pirates, or work independently as explorers, traders, and more. 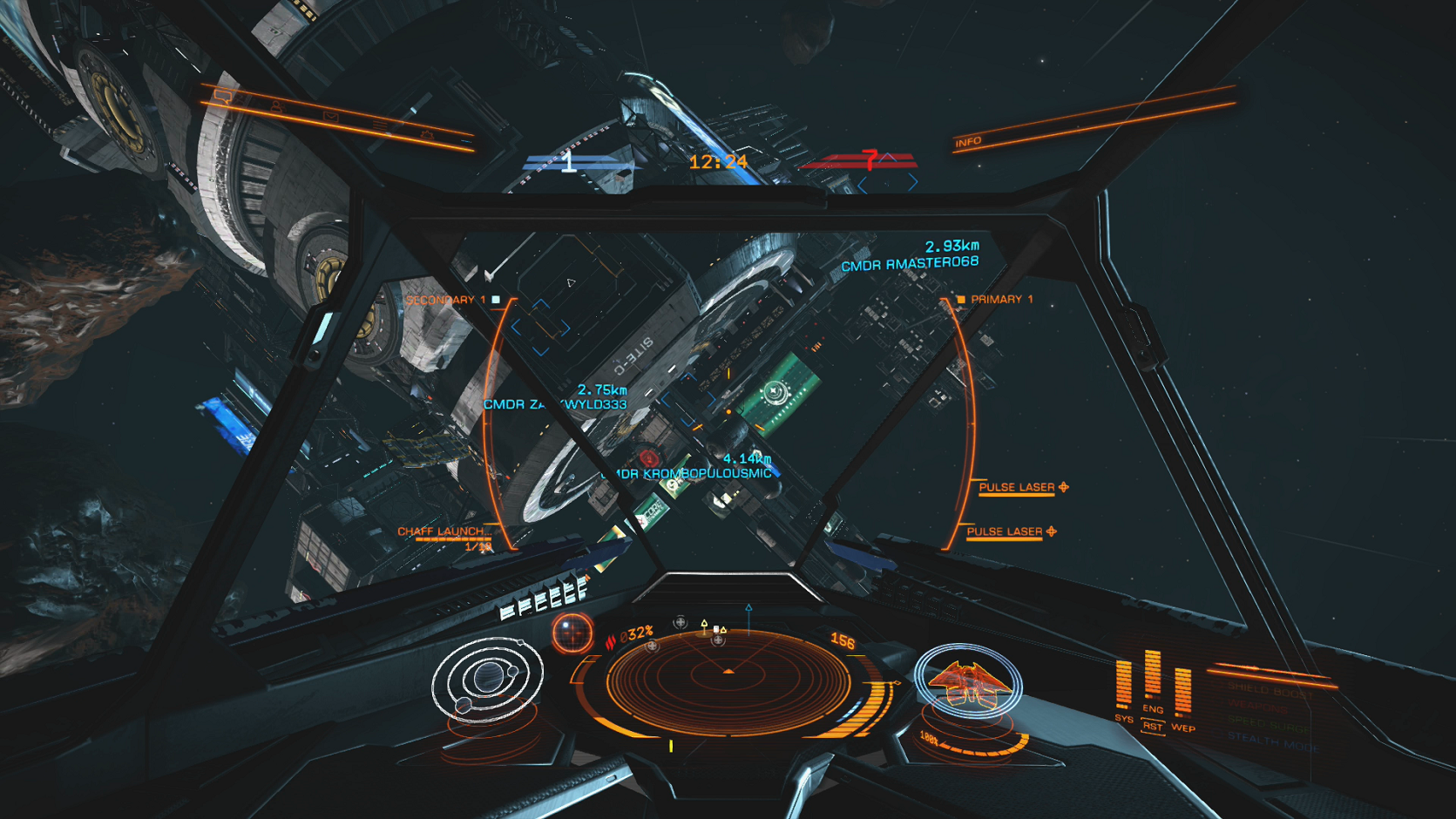 Of course, not all of this is clear from the get-go. In fact, once I finished the long tutorials and received my first little spaceship, the realization set in that I was all on my own in a big scary galaxy. But, figuring out how everything works is part of the fun. I decided early on that the life of the explorer was for me. To get a nice shiny exploration ship, in this case an Asp, I would need quite a bit of money. Not a huge amount, but exploration is not the kind of profession that pays rookies very well. So, like many 'Elite' greenhorns, I started shuttling around rare cargo from station to station to generate profits. The profits did come, and much more quickly when I was able to upgrade both my friendship drive (it might be called a "frame shift drive", but I feel like the announcer could be interpreted either way) and cargo capacity. 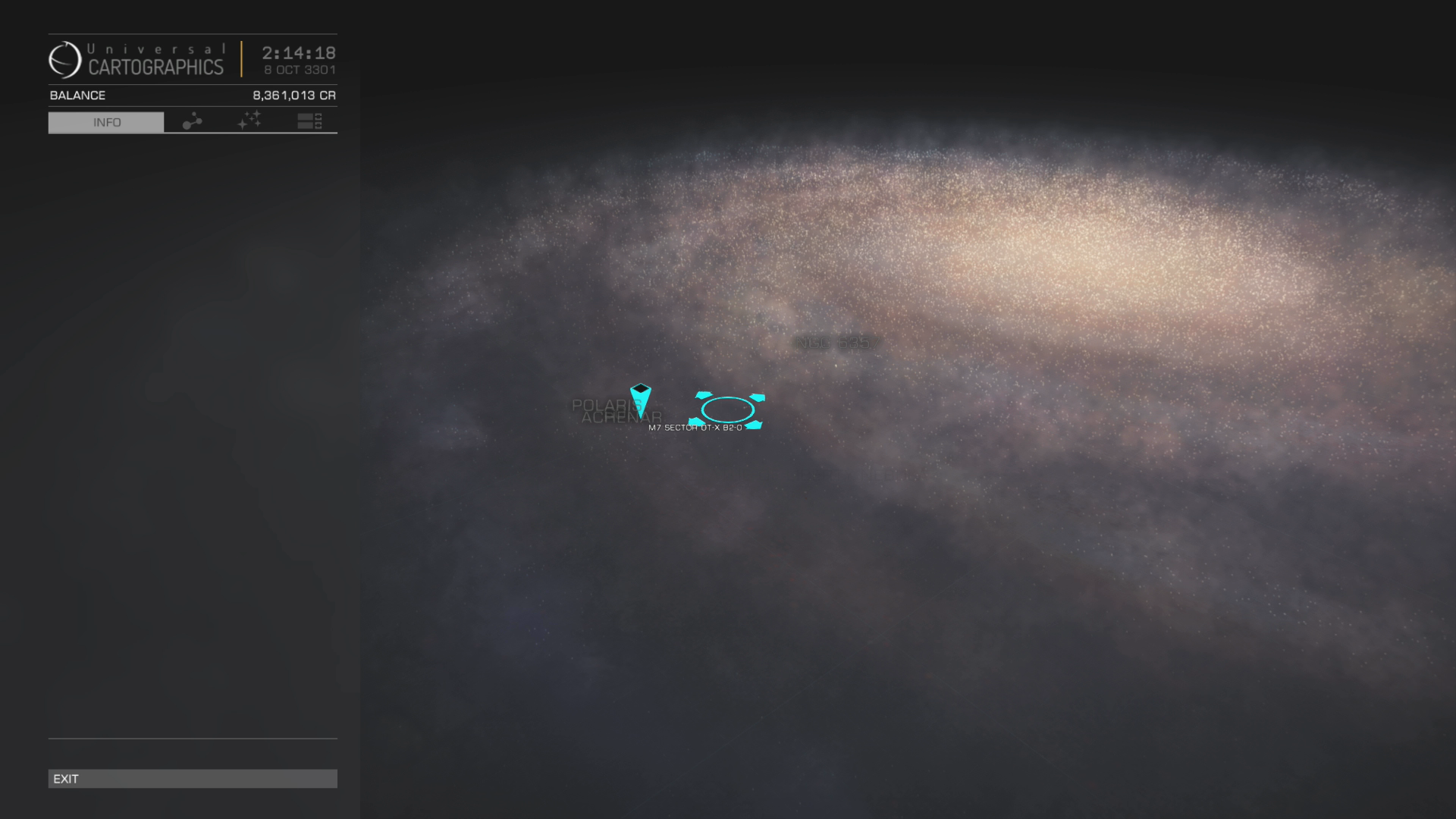 I also tried combat for a time, having heard that bounty hunting was a decent payout, but this I had less luck with. The dogfighting mechanics are a blast, but NPC pirates are sometimes elusive. I would fly around various systems for an hour or two at a time, dipping into resource extraction sites and the like, totally ready to protect hapless NPC miners from the mean pirates. But it would often be just the miners who would show up, dutifully laser beaming rocks while I just sat there with my little combat ship, probably making them nervous. I struggled with the mission system as well, as juggling the reputation system is probably something that even a short tutorial might have helped with.

Once I had my lovely Asp and my fancy friendship drive, I took the stars and haven’t been back to civilization since. Exploration, while it can be dry and it can be lonely, is true freedom. 'Elite: Dangerous' has a massive world to explore - the entire Milky Way galaxy, to be exact. Since the servers have merged I am seeing more CMDRs listed as the discoverers, but there are still undiscovered celestial bodies, and there probably always will be. I would like to see more done with exploration, and it seems that Frontier agrees with me, because very soon they will be releasing their 'Horizons' expansion series and allowing pioneers to land on and explore celestial surfaces with futuristic 4x4s.

The control scheme has changed little since 'Elite: Dangerous' was in the preview phase. It’s hard, I won’t lie. Read through any online community of Xbox CMDRs and you will see stories about pilots of all skill levels (but mostly newer ones) crashing into space stations or experiencing docking accidents. It’s important to remember that above all else, this is a simulator. It’s going to take time to learn to fly, especially in close quarters. There are some automatic inertial adjustments that make life easier, but even these can be turned off for a more realistic space environment, which more experienced CMDRs can use to pull off amazing stunts. 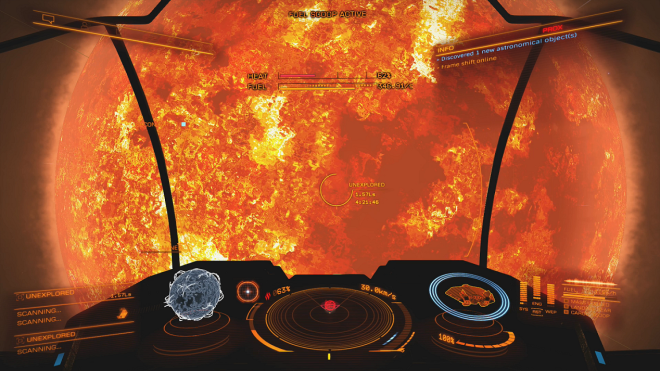 I am happy to report that almost all of the engine issues have been smoothed out, and 'Elite' on the One looks and plays better than ever. There’s no chop when entering or leaving hyperspace, no title crashes, no strange clipping. The game looks very nice on the Xbox, especially all of the pretty nebulae and stars and other astronomy stuff. The only issue of note is some unsightly blooming on the screen when near a star, but this is pretty minor. 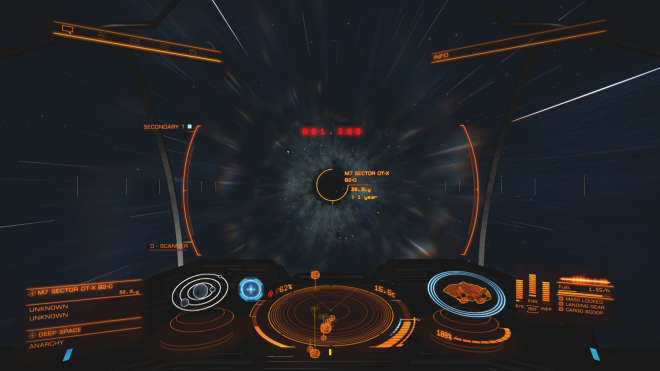 If I were a future spaceship captain, I feel like this is how it would sound. Well, I know that there aren’t really sounds in space, but that would make for a very dull soundscape. Lasers and engines and all of that are added for effect and pilot awareness. The narrator has a lovely voice. The music is curious and dark at the same time, much like the galaxy itself.

There are many ways to make a living in open play, and if you fly in civilized space, these professions will often bring you into contact with other players. Sometimes the interaction will be friendly, but often it will turn violent, such as when you’re on supercruise approach to a depot and you get an interdiction warning. These experiences can be exhilarating and addictive, when they’re not vindictive (there is an anti-griefing policy, but it is thin, for more player freedom). Sometimes the game gave me goals and sometimes I came up with the goals myself, like the customary explorer pilgrimage to Sagittarius A* (still in progress).

For the shy, a solo play option is included. NPC pirates still exist, but without other humans, this is a safer and less lively galaxy. The separate multiplayer mode, called CQC, was implemented on the Xbox relatively recently, and despite a currently small offering of maps and gametypes, it is an excellent chance for combat for pilots who may not otherwise get to do it much in open play. 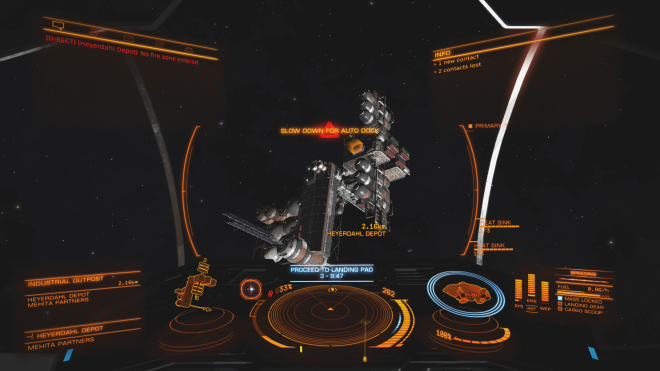 The content and gameplay of 'Elite' is much as it was during the Preview program, which is to say excellent. The technical issues are much improved, and the addition of CQC is a net positive. It can be a cold, uninviting experience for the new player, but it is a great spaceship game that should not be missed.