The Game Itself
4 Stars
The Video: Sizing Up the Picture
3 Stars
The Audio: Rating the Sound
5 Stars
Replay Factor
4 Stars
Bottom Line
Recommended

Developed by Double Damage Games, 'Rebel Galaxy' is a capital spaceship sim. Double Damage is led by Erich Schaefer, co-founder of Blizzard North, and Travis Baldree, creator of 'Fate'. The two previously collaborated at Runic Games, where they made 'Torchlight'.

'Rebel Galaxy' is mostly about space combat, but perhaps not as most players are accustomed to it. The ship is huge, definitely a capital vessel, not one of the tiny dogfighters that can be found in most sims. Most of the enemies, however, are dogfighters. When they swarm together like flies, they become a threat. Even with many of them on the field, the stalwart capital can take a beating. As the pilot I am expected to manage and track all targets, no matter how fast and tiny they are, keep enemy fire distributed across my shields evenly so as to avoid disastrous hull breaches, and blow up incoming projectiles, not to mention actually moving my ship around. Being a spaceship pilot is a tough job, but in 'Rebel Galaxy' it’s also a blast.

There’s more to life than just fighting, though. More enterprising and less violent pilots can make their living by mining or trading, outfitting their ship as desired for maximum profit and/or destructive capacity, as the case may be. Becoming a miner is as easy as shooting space rocks with combat guns and then sucking up the debris with a tractor beam, although using mining lasers and survey equipment works much better. Like mining in most video games, it’s rather dry, but it pays the bills. Trading requires a bit more math and has the pilot picking up goods for cheap in one system, moving them to another, and selling for a profit. Of course, opportunistic pirates love hanging out in busy trade routes, ready to waylay unprepared couriers. 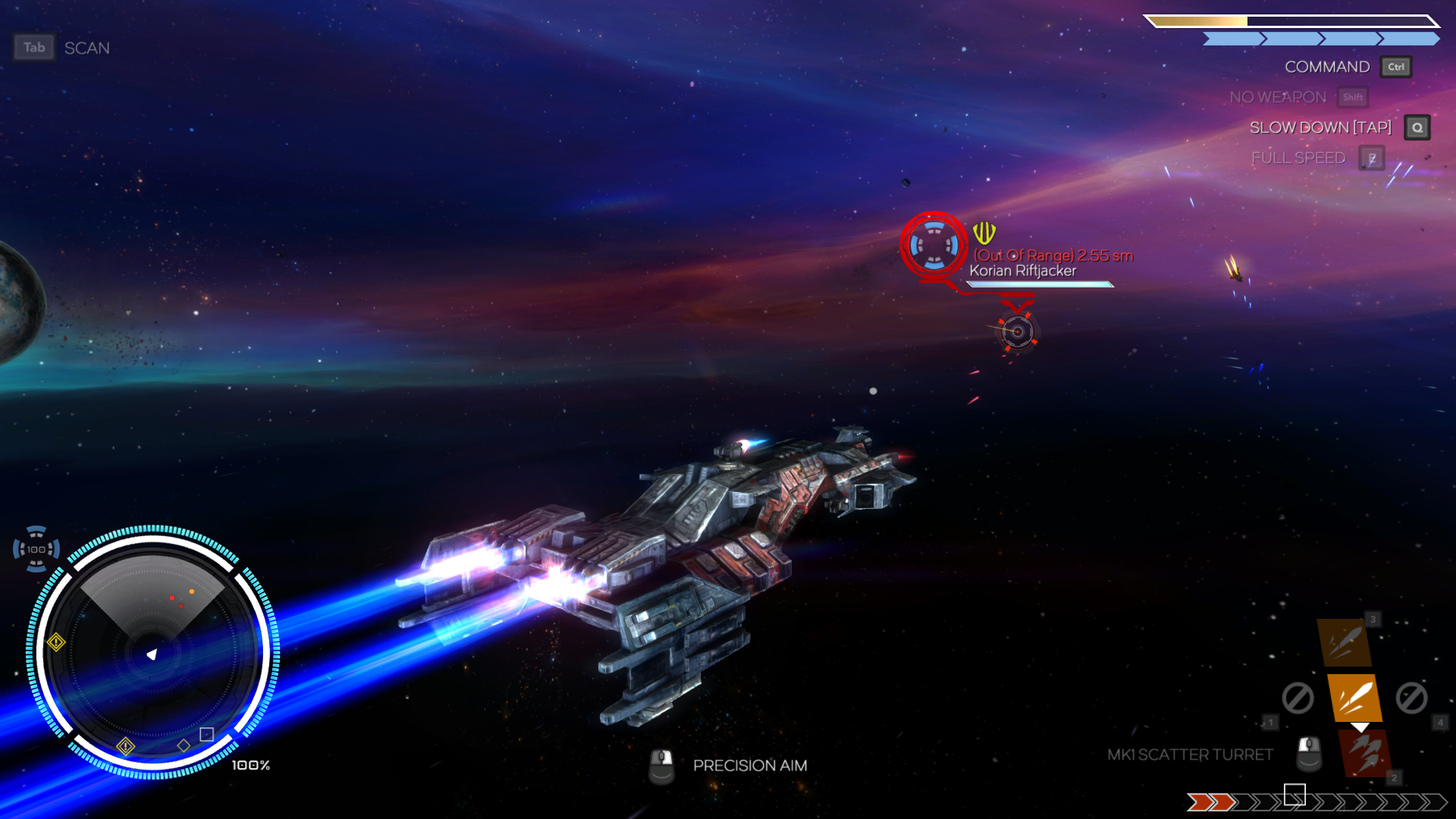 While the militia does help in some places, this part of space is quite lawless, as the title of the game might suggest. Sometimes I was forced to abandon mission objectives because my ship just wasn’t ready for it, and return when I had upgraded my systems or hired a more capable merc wingman. I wasn’t too broken up about it, because the open world in 'Rebel Galaxy' is quite large and there’s always something to do. There is a main questline, dealing with the previous owner of the ship (also the main character’s aunt, who seems to be a washed-up smuggler of some notoriety) that incidentally serves as a slow tutorial, but I was quite happy to go off the beaten path and explore outer space on my own.

'Rebel Galaxy' doesn’t have the scientific physics of an 'Elite' or the compelling story of a 'Homeworld', but what it does have is nonstop, fast-paced combat and a uniquely independent spirit, and it has those things in spades. Fighting is crazy and exciting, even if I don’t understand exactly how my shields work because that tutorial is a bit confusing. While the ship is a capital, that doesn’t mean that it’s slow or ponderous. Even the default ship, as weak as it is, moves pretty well, enough to give the bombers and frigates a run for their money. Also, just like old-school pirate water ships, the heaviest weapons are broadside cannons that can only be fired perpendicular to the ship. The broadsides are powerful, but more difficult to aim and control. They are not for use against smaller dogfighters. Instead, different groups of turrets with a large variety of effects can be grouped together, controlled manually via point-and-hold, and even fired in a first-person configuration for precise shooting. These turrets tend to shoot with some competence even when not directly controlled. 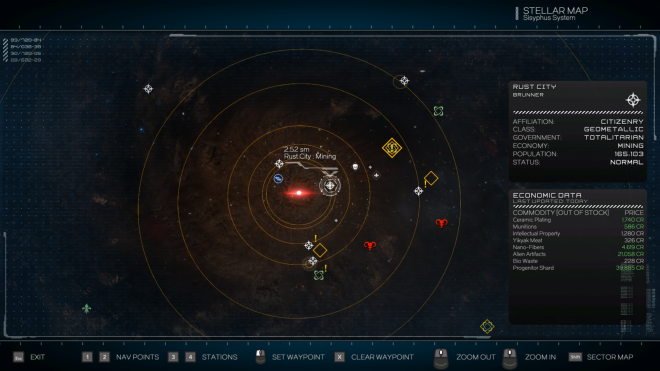 This isn’t a fully 3D experience - the ship cannot move up or down on the celestial plane. To compensate, most enemies spend very little time moving straight up or down, so it’s never impossible to hit them. The textures of ships and stations aren’t beautiful, but the lighting, nebulae, and celestial bodies are. I had a serious issue with the camera during combat. The mouse tends to rubberband all over the place when aiming the turret groups, and broadside shooting can be frustrating as well. 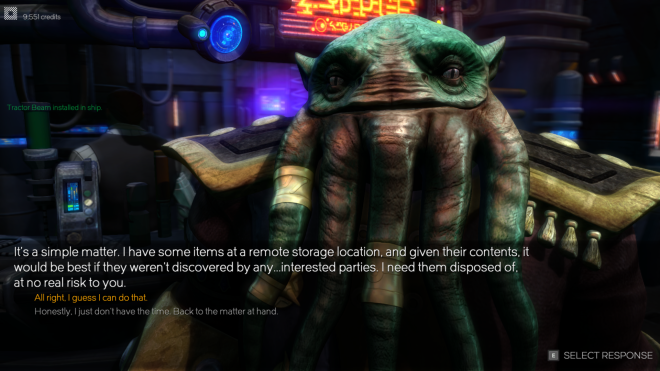 The soundtrack often steals the show. It is audacious Southern rock; a bit country but not the kind of twangy pop you hear on contemporary country stations. There’s a little bluegrass, a little jazz, some alt blues, and a lot of electric guitar. When mixed in with the whines of the starship engines and the relentless blasting, it’s the perfect aural environment for an outlaw space game.

'Rebel Galaxy' is a single-player game, but it’s definitely played best when not expecting a lot of supervision. I had the most fun when I ignored the campaign and struck out on my own, setting up goals that I felt were most appropriate for me. For instance, I waffled for quite a while between upgrading my little flak turrets and laughable shields or saving up for a more capable ship, and even though the latter led to some initially uncompletable missions, the wait was worth it. The game has a lot of content to be discovered, and very little is tied up in the mission system. 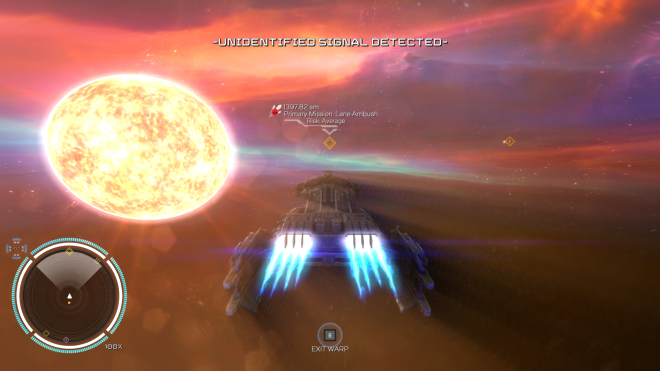 'Rebel Galaxy' comes out of left field - an adept and fun space sim from two developers who have spent decades working on RPGs. If you have ever wanted to fly a capital ship of your very own and blow up pirates (or become one), your opportunity has arrived at last.