The Game Itself
4 Stars
The Video: Sizing Up the Picture
3.5 Stars
The Audio: Rating the Sound
4.5 Stars
Replay Factor
4 Stars
Bottom Line
Recommended

Jackbox Games, based in Chicago and previously known as Jellyvision and Learn Television, has been working on social and party games for the better part of 25 years. Their flagship series is the trivia game 'You Don’t Know Jack'. The first 'The Jackbox Party Pack' was released last year

'Fibbage 2' (2-8 players) is the sequel to the hilarious lying game that works great with whatever phones, tablets or laptops are lying around. The new game has twice as many questions (hundreds) as the original, and includes the pack's online Audience feature. In 'Bomb Corp.,' (1-4 players) players need to work together to get tasks done around the office, such tasks include making coffee and filing, and of course, defusing bombs. In 'EarWax' (3-8 players) players need to pick two sound effects in order to sound out the given topic.  'Quiplash XL' (3-8 players) is the original 'Quiplash' made XL through extra content like the first DLC pack and extra prompts. In 'Bidiots,' (3-6 players) players draw and bid on each other's terrible drawings using insider information.

Within the five games, players will find the audience participation features, extended timer options for live streaming, and even family filter options. To connect devices to the game, players need only go to https://jackbox.tv and enter the code that appears on-screen during the game.

'The Jackbox Party Pack 2' compilation includes 'Fibbage 2', 'Quiplash XL', 'Earwax', 'Bidiots', and 'Bomb Corp'. With the exception of 'Bomb Corp', these are all multiplayer-only games that must be played locally, with all players sitting in front of the TV (in the interest of comprehensiveness I tried to play remotely with a friend - doesn’t work). 'Bomb Corp' has both single- and multiplayer modes.

Before I get into the individual games, I’ll talk a bit about how everything works. Jackbox has a robust server arrangement that permits their games to be played with an accompanying browser. This is excellent for console players who may not be interested in investing in controllers for up to eight people. Instead, only one controller needs to be connected in order to select a game to be played. Once it is selected, all of the players then interact with the game via any gadget that can use a web browser: a phone, tablet, or plain old-fashioned computer. The setup is very simple, even for young kids or tech-challenged people. My group of friends discovered that the Safari browser has problems accessing the Jackbox server, but Chrome worked on every device (several Samsung and Apple smartphones). If you happen to have more than seven real life friends, or a large Twitch following or some such, additional players can participate as audience members. 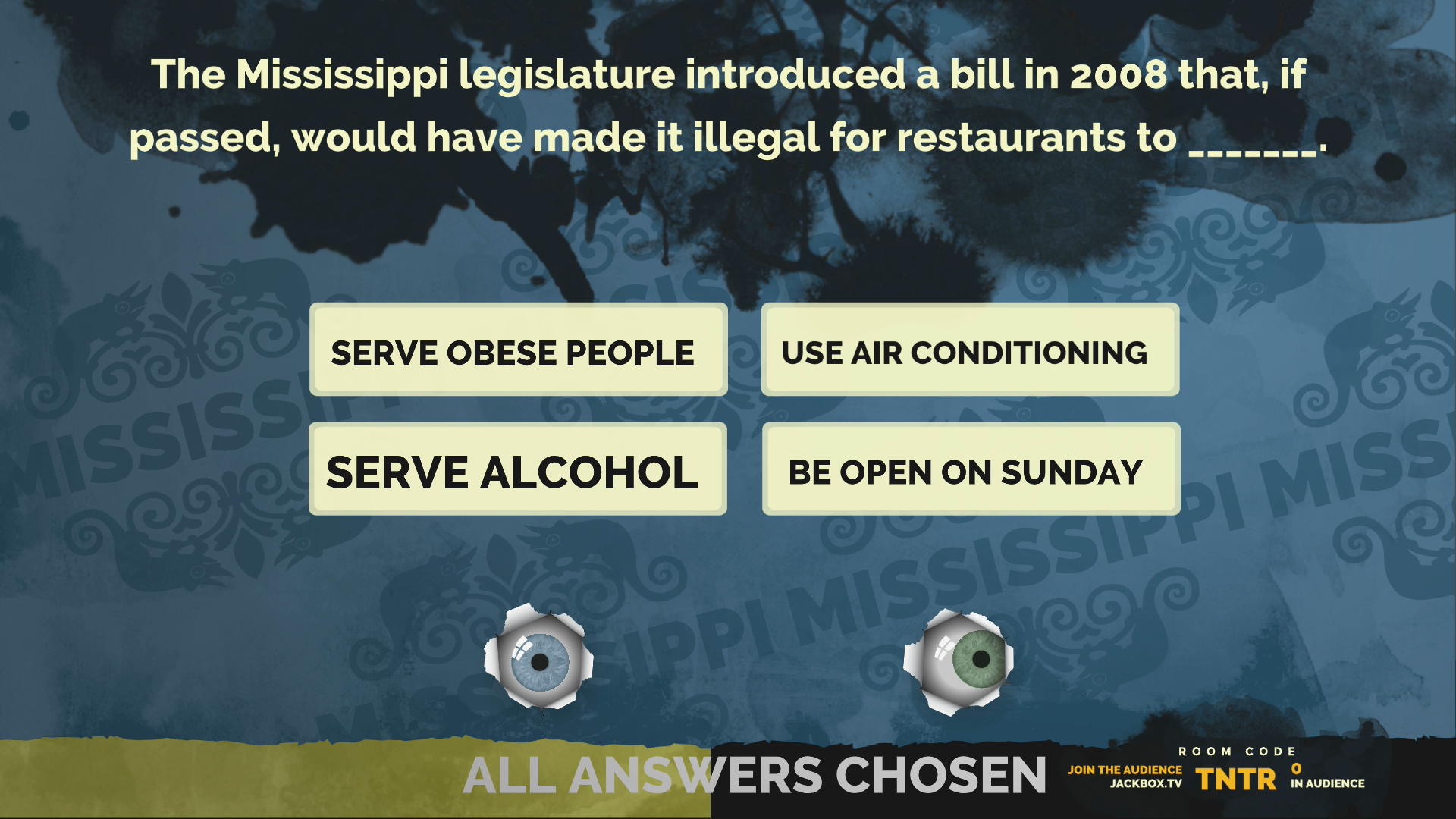 The strongest game in the set is 'Fibbage 2'. This version has double the number of questions than its predecessor and a little cheat called the deFIBrillator that removes several wrong answers and can be used once per game. In each round, the announcer gives the players a true statement that has one important word blanked out. Each player submits a lie of their own creation to fill in the blank, and then other players have to select the correct answer that is mixed in with all of the lies. Because the real answer is usually wacky or incredible, it can be difficult to pick it out from the lies. For every player who selects a lie as the answer, the liar receives points, and should a player select the correct answer, they also get points. 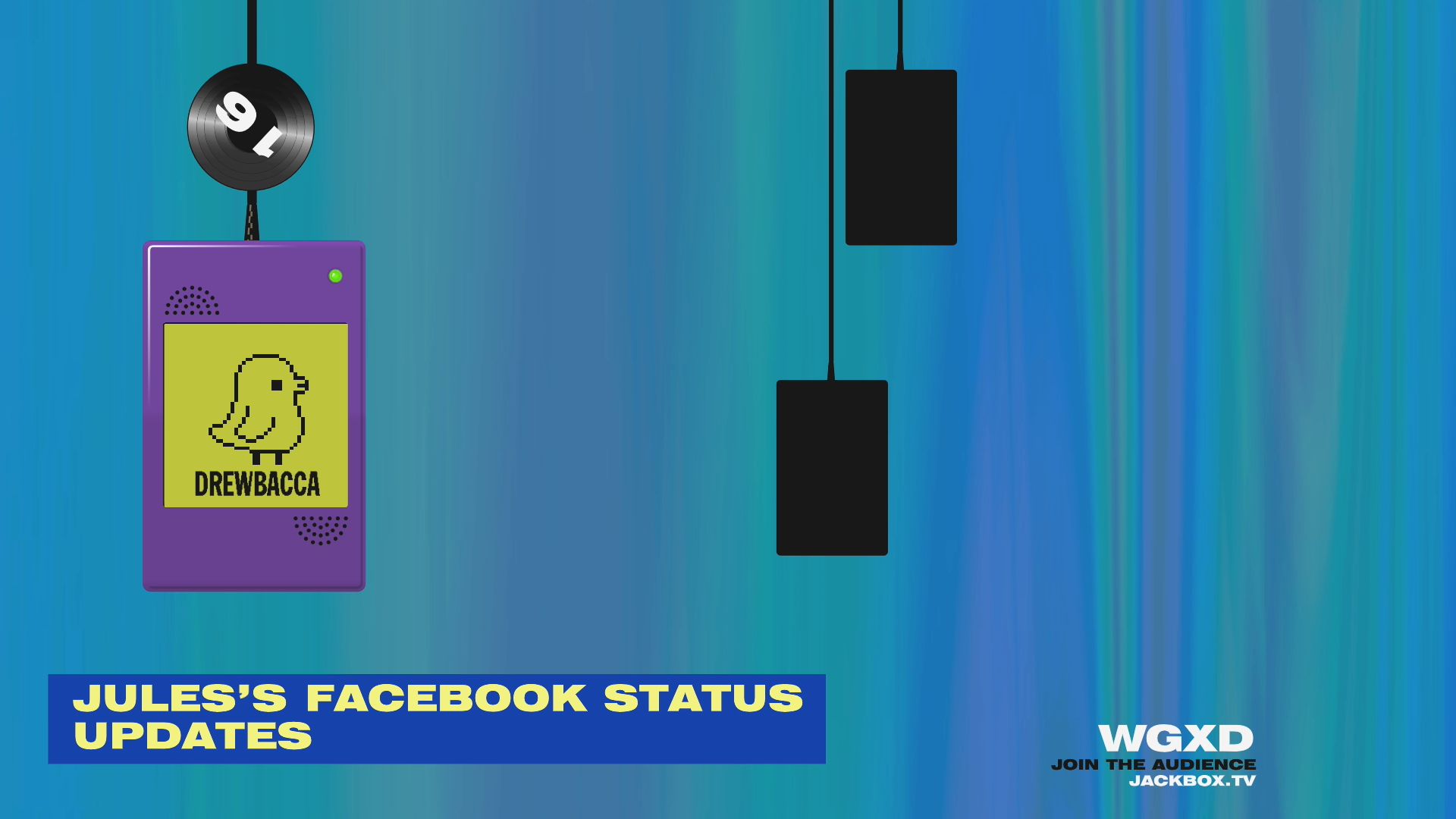 Next was 'Earwax', a sound effect game. Slightly less competitive than 'Fibbage', it has players receiving a suggestive prompt, such as "What is Levi thinking about in the shower?” and then selecting sound effects from a randomly generated list to describe that activity. One player each round is designated by the game as the judge, and selects their favorite submission to win points. 'Earwax' generated some laughs, but after the first match was over, we were quick to move on to something else.

'Bidiots' is a good time for those willing to navigate its more technical ruleset. Each player is an artist of sorts, and draws crude pictures with their touchscreen or mouse to illustrate prompts given by the game. Once the "art" is ready, each picture goes up for auction. The other players bid on the art on the basis of random suggestions given by the game. For instance, I had a standing order to purchase any art that looked like South America, for a large profit. When one of those appeared, I bid against any other players who also wanted South American pieces. Because we were all terrible smartphone artists, sometimes it was impossible to determine what the artist was trying to convey, because all of their pieces looked so potato. Artists receive a share of the pot whenever their pieces are purchased, so clever players can bluff their competitors by surreptitiously bidding on their own items, driving up the price (this can lead to hilarity when players inadvertently buy their own overpriced garbage).

The next game is 'Quiplash XL', a sequel of sorts to Jackbox’s 'Quiplash' Kickstarter project. It’s a simple game where the players are given a prompt, like "Inappropriate things to do in a cemetery”, and each comes up with an idea. The ideas are then voted on by the other players and the audience, and the winner of each round earns points. 'Quiplash' is fun, easy to learn, and has such a huge database of prompts that it will be a long time before you see a duplicate. 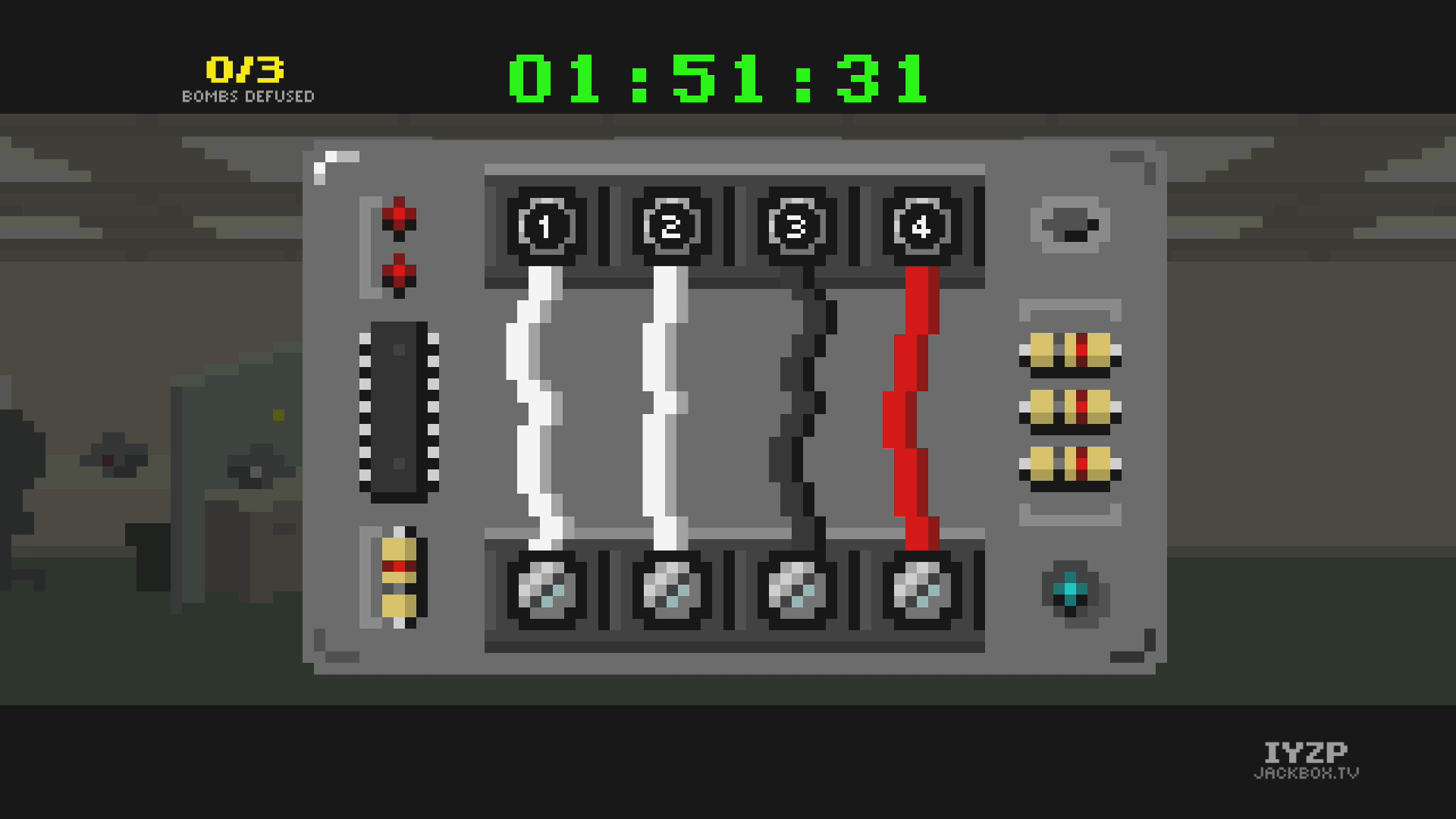 'Bomb Corp.' is an odd little pixel game where the players cooperate to achieve the objectives instead of antagonizing one another with lies and smarmy comments (although doing those things with your friends is awesome). It is similar to 'Keep Talking and Nobody Explodes' in that one person typically plays the part of the bomb defuser and the other players have to help them cut the cords in the proper order. Early rounds are easy, with instructions like "Cut all green wires". Later rounds become devilishly hard and include multiple defusers, code words, and instructions that cancel each other out or prohibit certain players from cutting cords. 'Bomb Corp.' is a very different experience from the other games in the compilation, but with the right group of people, it can have interesting outcomes. My only complaint is that when the team fails an objective, the entire day must be restarted, instead of just that particular exercise. This can lead to demoralizing and repetitive gameplay over time. 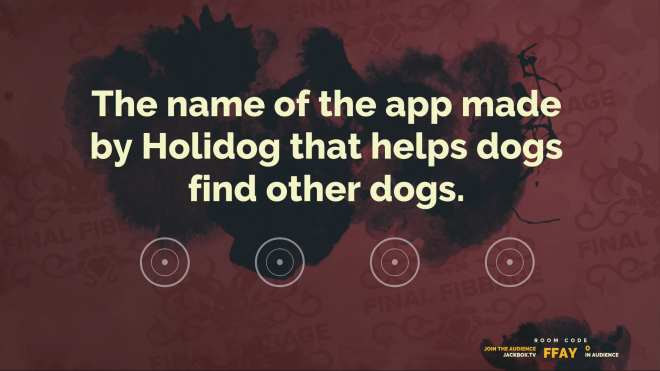 This is a party game that resembles a board game and therefore wasn’t created with visual beauty in mind. Still, everything is crisp and clear, without any artifacts or slowdowns. The accompanying browser-based controller can exhibit a delay at times, so we learned to be patient and not mash buttons willy-nilly. 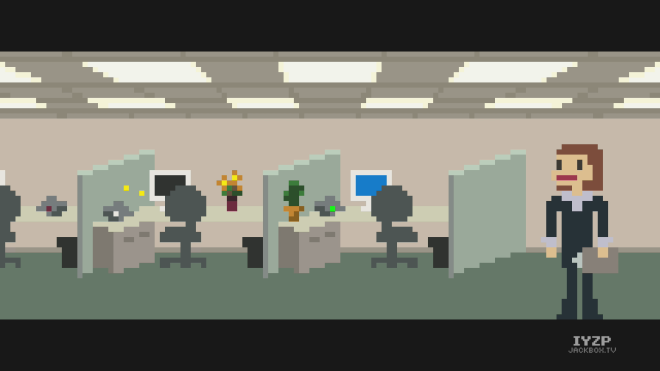 The narrator is suitably comical, often cracking jokes and gently heckling players who fail to earn points in a round. In one incident where a player was unable to submit an answer to a question on her phone, the narrator teased her by suggesting that pushing a few buttons might be harder than it looks. The sound effects are great, particularly in 'Earwax' where they are crucial to gameplay.

'The Jackbox Party Pack 2' is the kind of game that is fun whenever you can get people together in person. It’s perfect for families as well, what with its parent filters that can tone down the more provocative prompts in games like 'Quiplash' (even without it, I wouldn’t describe any of the content as obscene). 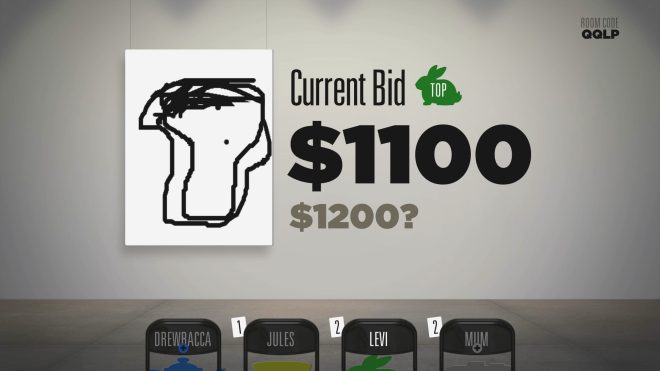 Not all of the games in 'The Jackbox Party Pack 2' are clear winners, but the stronger titles make up for their weaker brethren. The system of player interaction is genius and makes it very palatable for console owners, not to mention the relatively cheap price. If you have a family that loves gaming together, or are looking for ideas or an intense laugh for when you have friends over, 'The Jackbox Party Pack 2' might just be what you’re looking for.