Announced late in the summer, Creative is launching a whole new line of audio equipment. Dubbed 'Sound BlasterX,' this line-up is thus far all about headsets, and by way of branding, all about gaming. Creative has been making headsets for years, and more recently, the company has had plenty of "gaming" themed products. So what sets the BlasterX line apart? According to Creative, this line is about bringing a new level of detail to players while using designs that allow for hours of gaming without fatigue.

Clarity and usability are noble goals for audio equipment. The BlasterX P5 is the in-ear part of the line-up, and it comes with even more promise. The 7mm drivers form the core of a noise-isolating design, and, get this, tri-ported backing.

There is a little more to the P5 than the part that resides in-ear. There is a prominent mic and control cluster in the middle of the braided cabling. There is also a carry case, a 4-pole to twin 3.5mm adapter cable, and PC audio enhancement software .

The P5 is billed as a PC, Mac, Android, iOS, PS4, and Xbox One in-ear headset, which is a tall order for any headset, and even more daunting for an in-ear design. Can the P5 possibly live up to its gaming promise?

When Creative announced a new gaming line of headsets, I took notice, but with very guarded expectations. All too often "gaming headset" means branding, gaudy designs, and superfluous features. The P5 in particular made me hesitant. Gaming ear buds/in-ear headsets in my experience have been disappointing, and just a way to check a box in a marketing plan. I have a pair that are supposed to wrap around the ear, and they just fall out as though they aren't really meant to be used.

So when I finally got my hands on the BlasterX P5, my hopes were very low. As in, please don't be so bad as to be unusable for anything. I certainly never thought they would be good for gaming on a PS4, Xbox One, or PC.

Before I could dig into the sound quality, there first was the packaging. I have to say, and it's very superficial to do so- the P5 packaging is pretty damn sexy. It's reminiscent of Go Pro packaging, but with some curves and with an eye that magnifies one side of the P5. 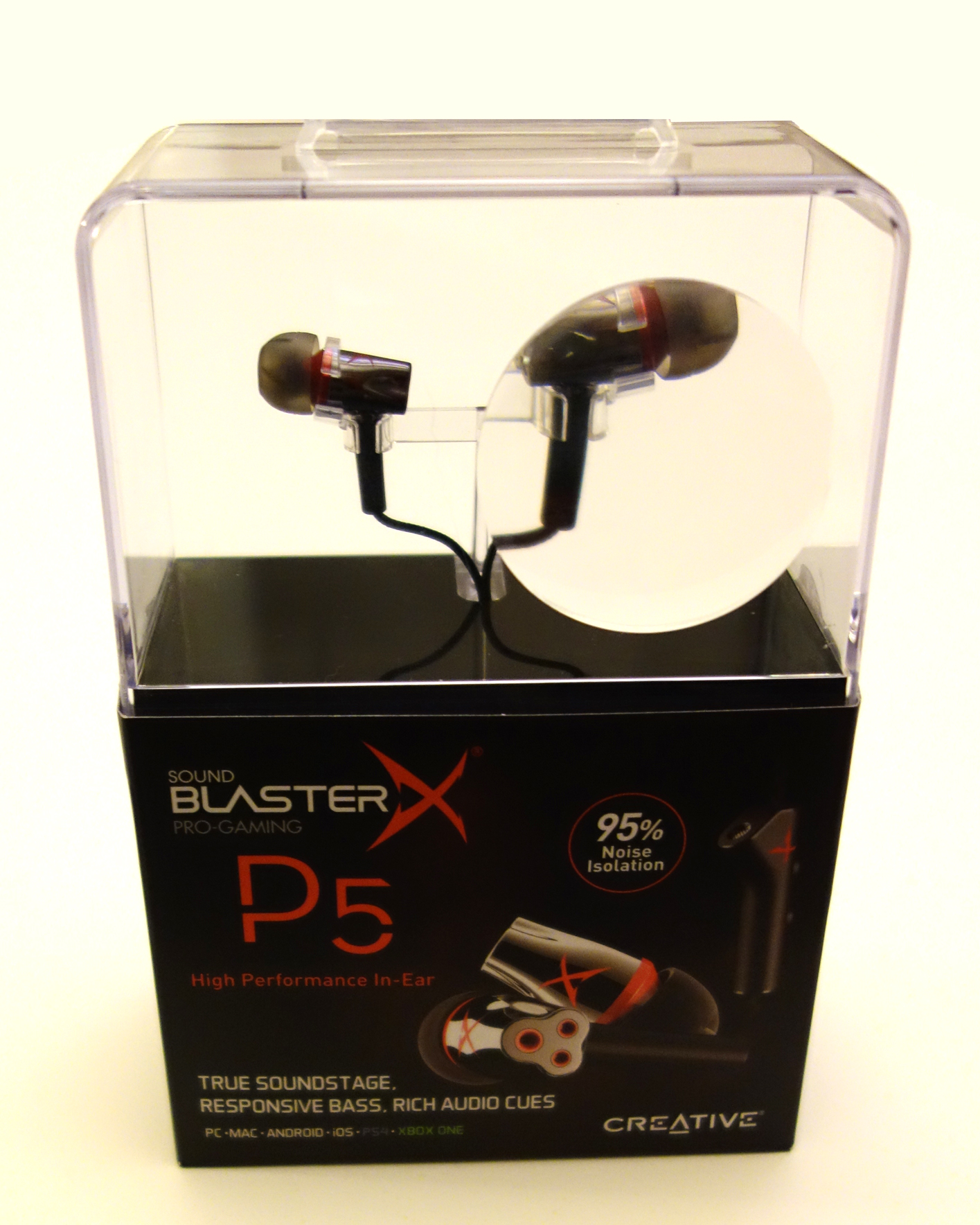 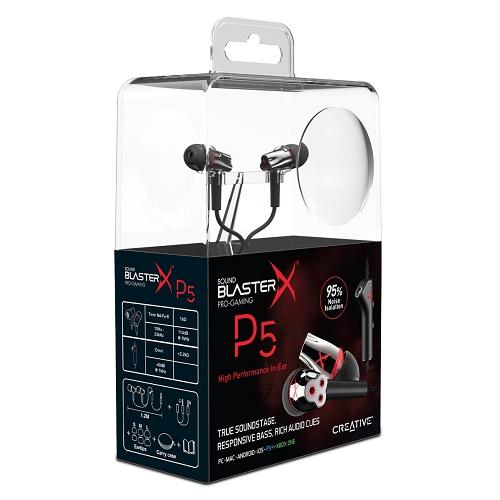 Happily, the good impressions go beyond the box. The BlasterX is fully-featured. This is meant to be a premium offering, and a proper carry case and an important (for PC anyway) accessory, the adapter cable that splits the mic and speaker connections, help to continue what the packaging starts.

I'll come back to the accessories, but the main course is the actual in-ear headset. The P5's construction at first glance is pretty slick, with the in-line mic in particular looking interesting. I was even more interested to hear how the P5 sounded, so I headed over to my PC and fired up my local copy of the 4K 'Just Cause 3' trailer. 10 seconds in, and I was hating the headset. It was so lifeless, and I thought maybe I should check the ear tips. I quickly realized that I had just set them in my ear. Pushing the drivers in just a bit, and the P5 came alive. 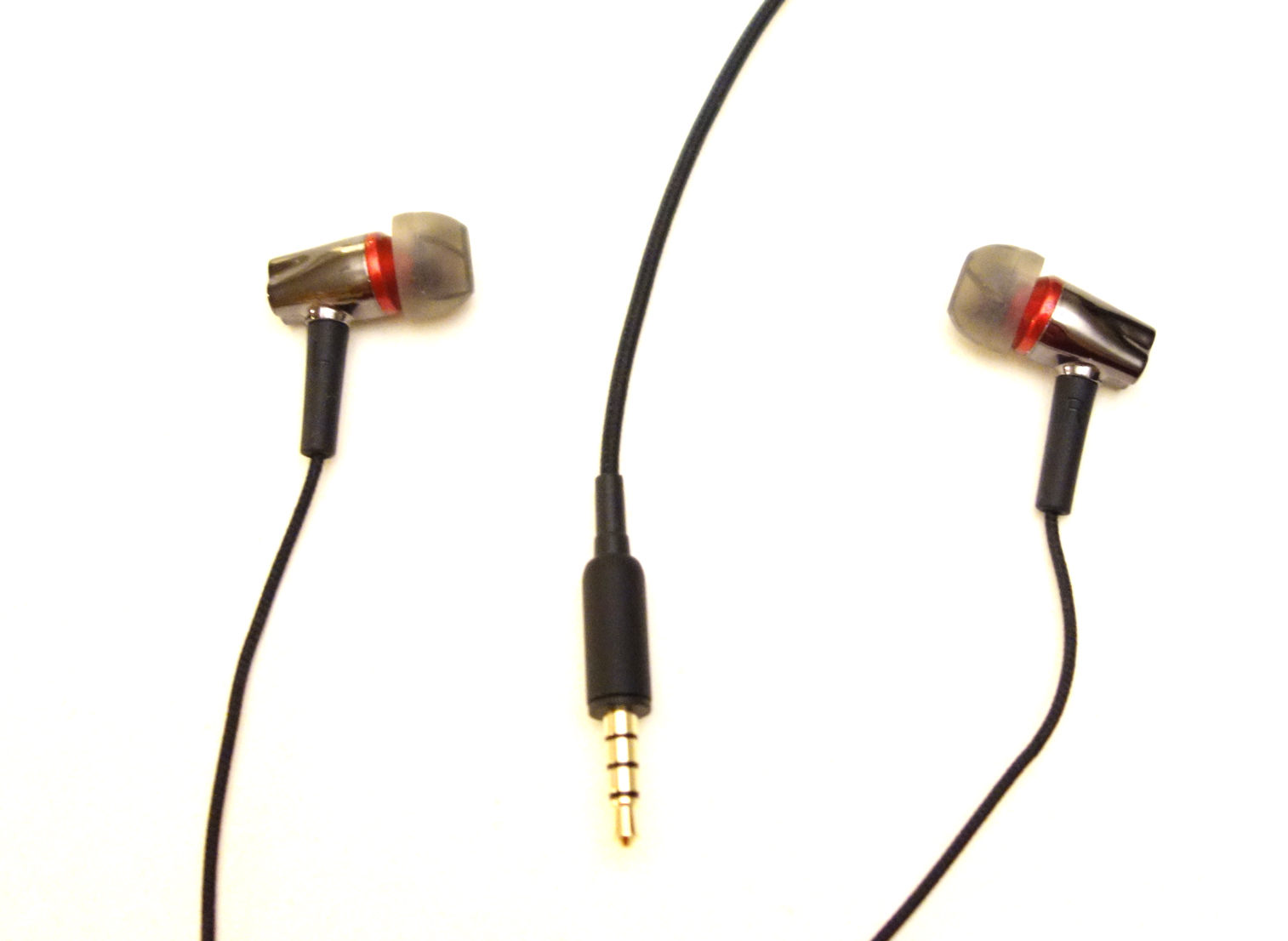 When that little sound pocket forms, outside sound is cut way down, and the P5 does its work. Those little drivers are amazing. Somehow, possibly through those fancy back ports, the P5 is able to produce nuanced bass and treble without crushing any of the detail. There is a part in that 'Just Cause 3' trailer in between explosions, when an open wheel car races next to two trains while the trailer music plays, that the serene chaos of Rico freeing up paradise hits one of its many crescendos, but every layer is remains audible. Later, when the satellite dish goes up in flames, the powerful series of detonations heard through the P5 is remarkable.

Suffice to say that my entire outlook on the P5 changed. Hopping on the PS4 with 'Call of Duty: Black Ops III,' I took the P5 into an online co-op session of the Nightmares mode. That's the mode that remixes the campaign with zombies. These zombies typically spawn out of thin air, and locating them by sound is crucial. Connected to the DualShock 4, the P5's stereo is powerful, and more robust than I normally expect when using the controller's 3.5mm port. The zombies, meanwhile, can get pretty relentless, especially in the arena areas where you have to just stay alive while they spawn and chase you. Quite often, they spawn right behind you, and it's all too easy for me to panic and go down. Fortunately, the zombies are a mouthy, growling, bunch. Moving and listening is the key to survival. 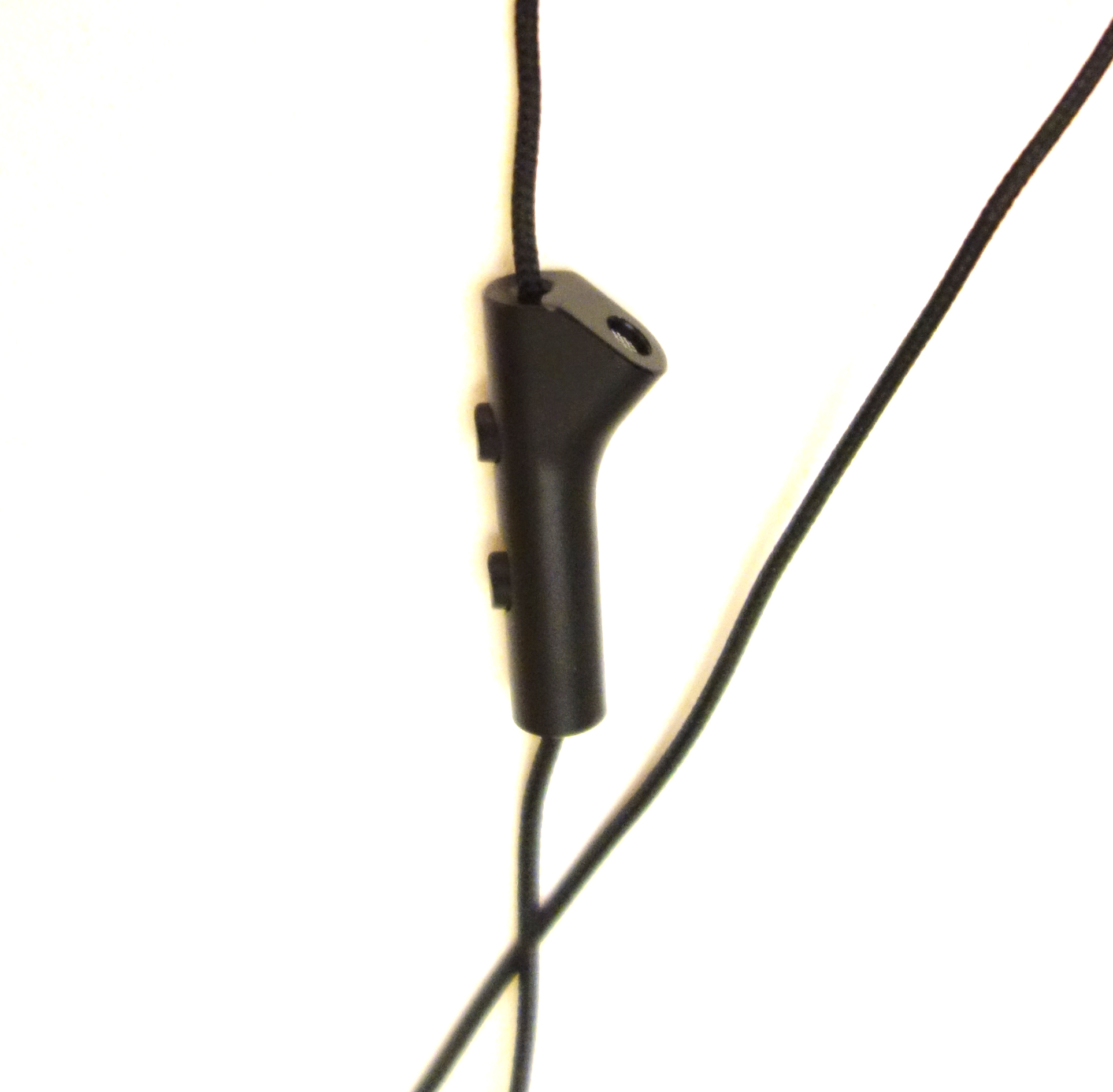 That brings me to another nicety of the P5, the mic. Usually when I'm playing online, I'm the one to ask people "hey are you using a dangle mic?" while cringing. A typical dangle mic picks up way too much room noise to be good, and this includes several "gaming" headsets. The P5's mic design is a bit more purposeful. The mic is part of an in-line control cluster, and it's angled toward the wearer's mouth. It's definitely adept enough to use without having to feel embarrassed, and it shouldn't be picking up either a stream of breathing or a ceiling fan.

There's a one-button control, which works fine with smartphones for calls and media control. There is also a mic mute which uses a smooth action. Presumably, this smooth travel is meant to let the user mute the mic without a sudden click or release of pressure. It takes a little getting used to, but it does seem to work.

Hopping onto the Xbox One, I hooked the P5 directly into the Elite Xbox controller's 3.5mm port and took in a few hours of 'Star Wars Battlefront.' You absolutely have to give it to 'Battlefront' and that iconic 'Star Wars' sound. Whether it's missile lock, or a thermal detonator, or the guns of a AT-ST, the P5 does the sound design proud.

As I switched over to 'Fallout 4' on my PC, the stellar balance of the P5 continued, even as the sun went down. Whether it was the long belayed ping of the subway PA of 'The Big Dig' or an attacking Assaultron, the P5 carries it all, and even after lengthy use, it can startle given the right prompt.

I could easily recommend this headset for online or offline gaming, but it's not just the audio quality that scores so well. I have quite a few ear-bud type headsets that I enjoyed for a few hours only to find that my ear cartilage needed a few hours break afterwards. Not so with the P5. Hour after hour, I can wear and use them and ear pain never enters into the equation. (Of course, I'm mostly careful about not getting a sudden blast of sound from plugging into something while the volume is set high, which is very important here. My phone even automatically will set the volume low in a preventative manner.)

There is one issue that I think hurts the P5's mobile performance. The sound-isolating design is great when sitting down. Walking around is another story. Rubbing on the braided cables, say with a shirt collar, while not playing anything on the headset, isn't a pleasant experience. It's better to take the headset off when walking and not playing anything.

I would have liked a volume wheel, but that seems to be contrary to the various mobile device specs. Other than the potential contact noise, the braided cabling is nice enough. The braiding should mean the cable will hold up to a decent level of abuse, but only time will tell. 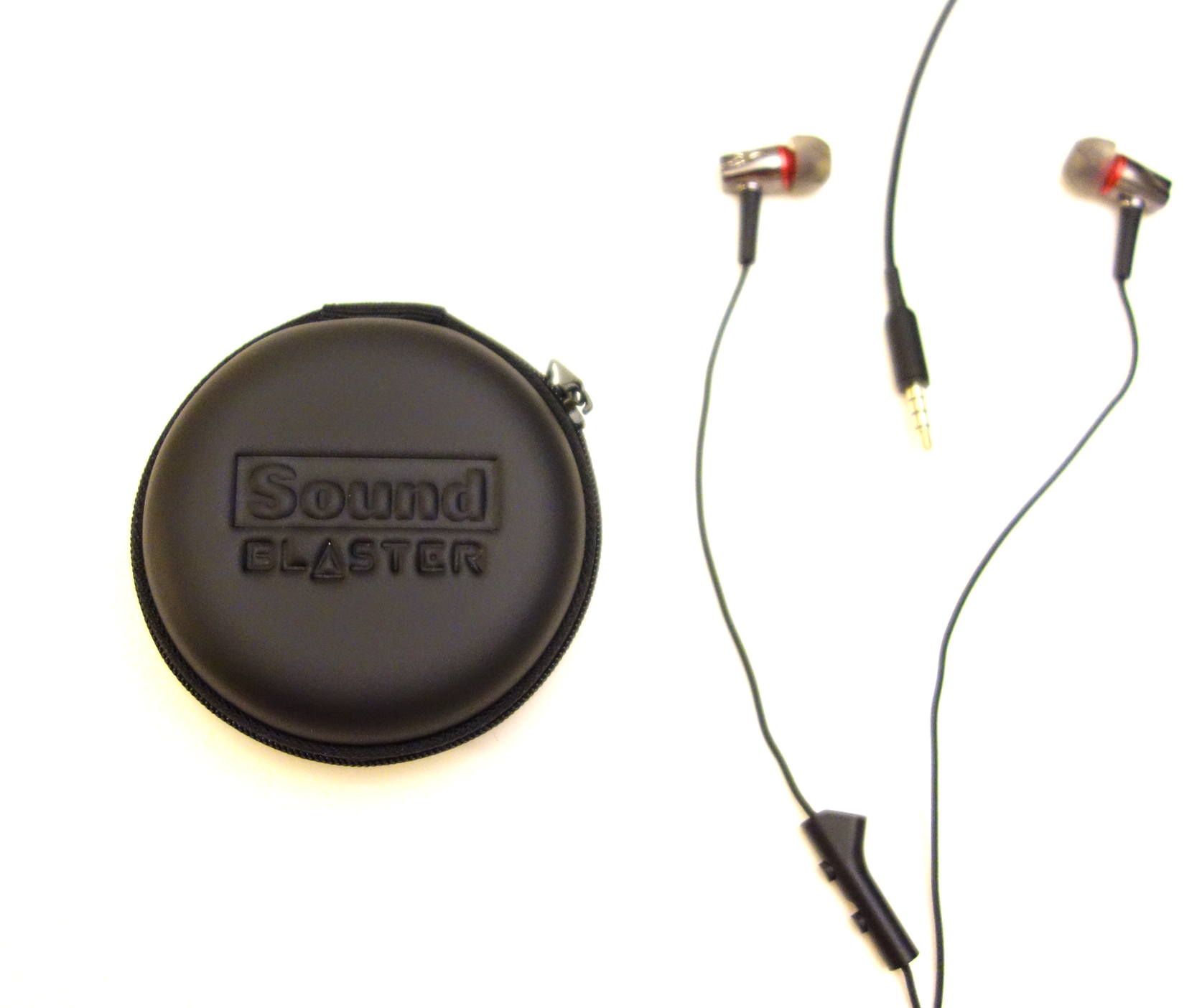 Creative tends to adhere to the split mic and earphone jack design of PC soundcards, but with the P5, they've made the right choice. The headset has a single male end, but comes with a nice splitter to cover such PC set-ups. There are the three expected sets of ear tips. The tips are somewhat transparent and the visible spiral ribbing works great at getting that seal without causing any issues. (I use the middle size.)

The case is a black 'Sound Blaster' emblazed hard shelled (not plastic hard) zippered number. There is a small pocket inside which is good for holding the ear tips. The case holds the P5 and the adapter easily. I like case, but I would like it more if it were a bit smaller. I would trade some of its protective nature for a smaller footprint. A simple soft bag along with this tougher number would have been useful. 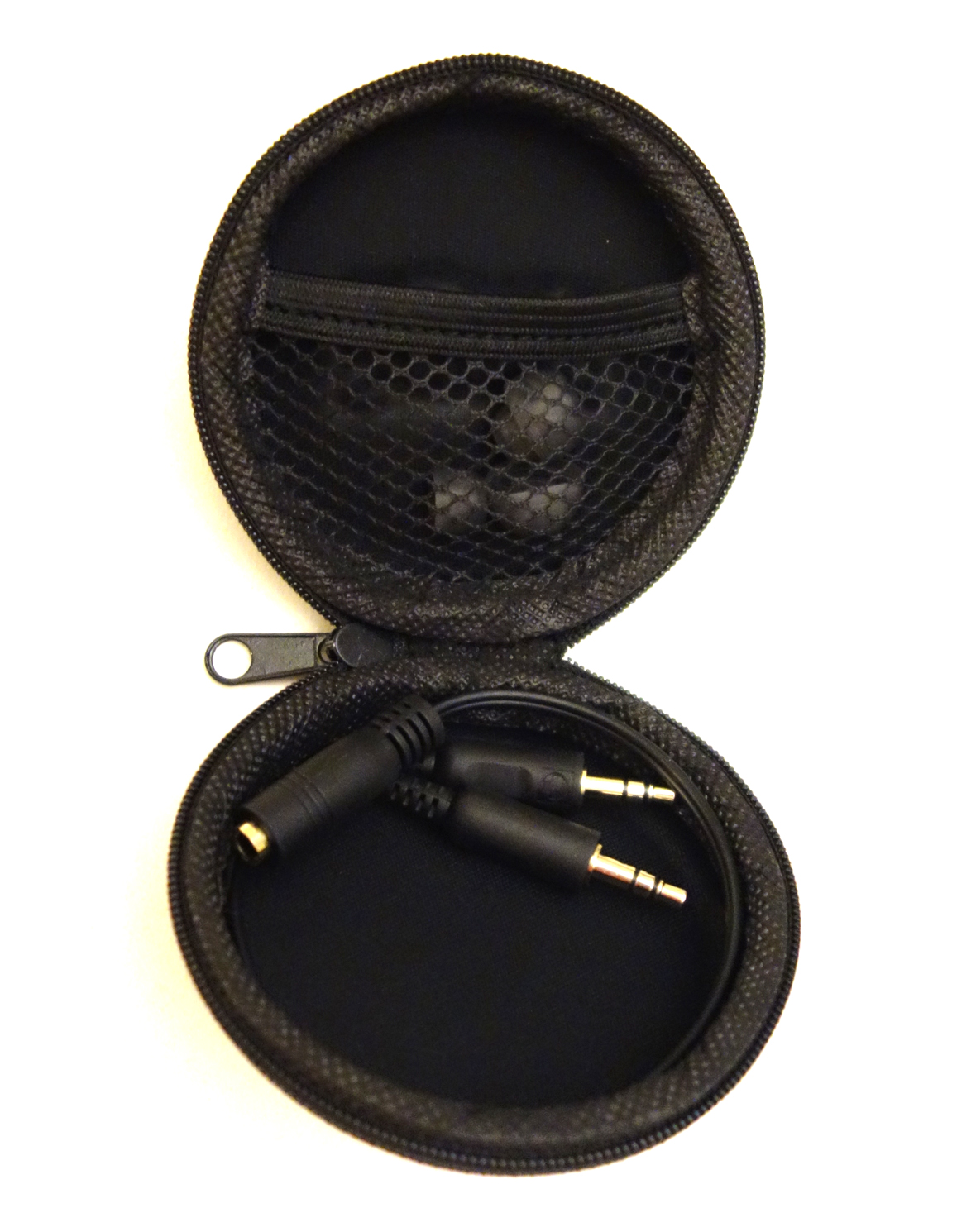 For the PC, there is the BlasterX Acoustic Engine audio software available to download from Creative (see here). With the P5, the software has six game-themed audio presets. What's fun is that each preset shows exactly what mix of EQ enhancements are being applied, and the effect can be demonstrated using a user-controller helicopter demo sound. It'll be interesting to see when something like this (a third party software based surround package) makes its way to the consoles.

Here again, when the P5 was announced, I was pretty ambivalent towards the style. Having gotten hands-on and found the in-ear set-up to be excellent, I suddenly find the looks a bit more enjoyable. I want to make it clear that no matter how the pictures look, in real life, the P5 has dark metallic look with blood red accents. (The shiny silver chrome look is not where the final product ended up.) The only silver color on the headset is on the driver and mic grills. 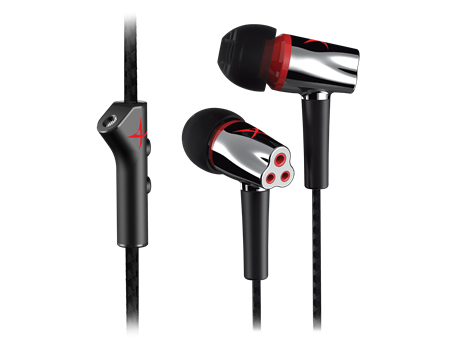 Seek and ye shall find. Even with an open mind, I would never have bet that the Sound BlasterX P5 could deliver even close to the performance and comfort level that I experienced during my review. No corners have been cut, and the P5 is pleasantly poised even when marathon gaming. This is the full package, and amazingly, I'm in the position to recommend an in-ear headset for serious console and PC gaming.