The Game Itself
2.5 Stars
The Video: Sizing Up the Picture
3.5 Stars
The Audio: Rating the Sound
4 Stars
Replay Factor
3.5 Stars
Bottom Line
For Fans Only

Traveller’s Tales is a division of WB Games and works exclusively on 'Lego' branded games, almost always paired with a second license from film or comics ('Batman', 'The Hobbit', etc.). They have worked with the Marvel property before, most recently with 2013’s 'Lego Marvel Super Heroes'.

'Lego Marvel’s Avengers' is based almost exclusively on Marvel’s Cinematic Universe. It cribs scenes mostly from 'The Avengers' and 'Avengers: Age of Ultron', but also has levels from 'Captain America: The First Avenger', 'Captain America: The Winter Soldier', 'Iron Man 3', and 'Thor: The Dark World'. The scenes have been "Legofied" in their kid-friendly way, with lots of toy violence, simple puzzle-solving, and running jokes. The Lego Nick Fury has a love of strawberry shakes, for instance, which he partakes of even when fighting the likes of Loki.

There are hundreds of characters, and each one has special abilities that can be used to solve puzzles, destroy the environment, and hunt for hidden collectibles. Iron Man has an energy beam that can cut through gold bricks, Black Widow can turn invisible, Hulk smashes, etc. 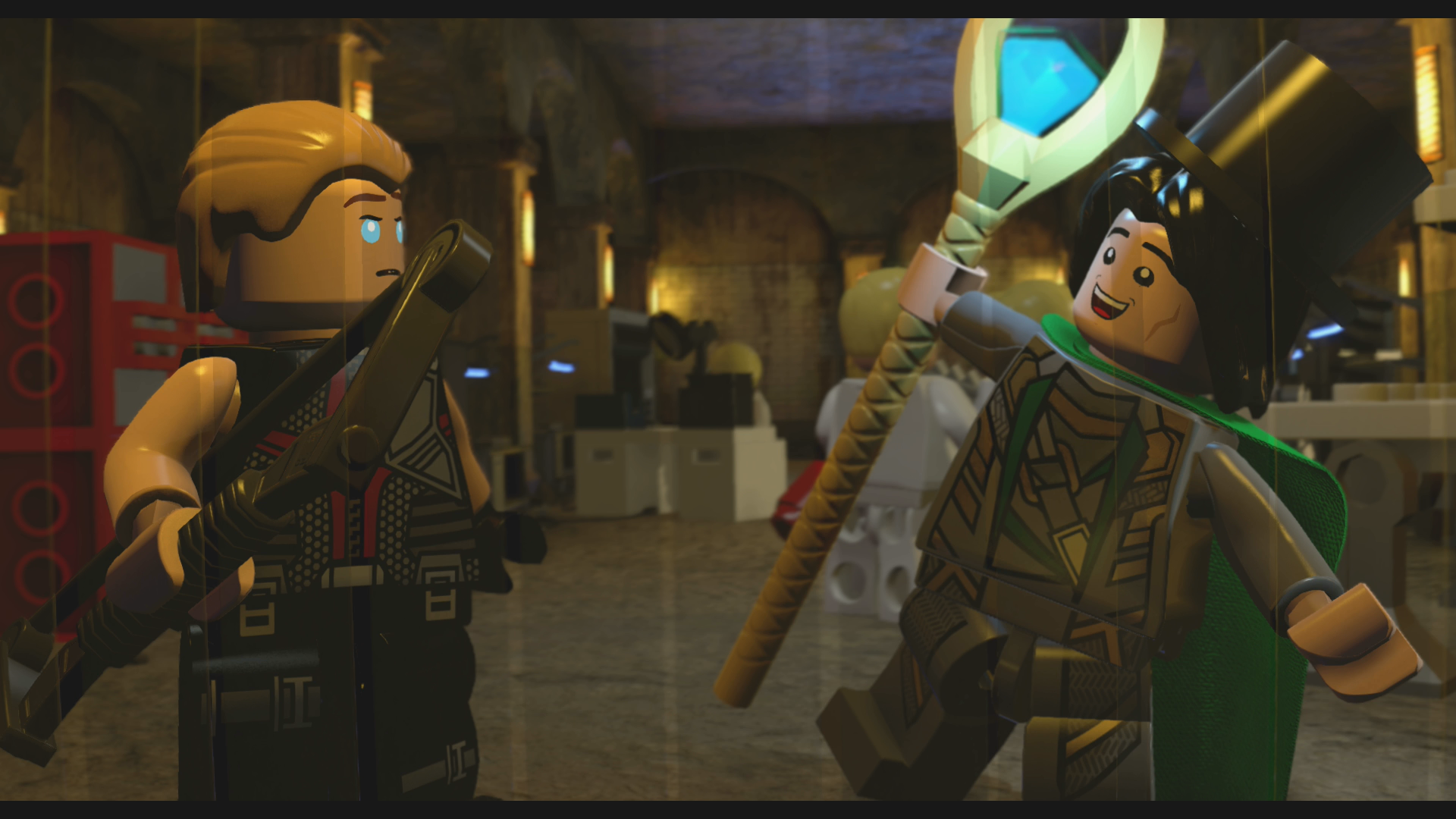 They must be unlocked, of course - the first playthrough of the campaign gives out a few heroes per mission, and it’s only in the free play mode afterwards where unlocked heroes can be swapped in and out on the fly. I noticed that the puzzles in 'Lego Marvel’s Avengers' are simpler than in previous 'Lego' outings. Where before I had sometimes struggled with finding the solution hiding in the environment, waiting for the correct ability to be activated, now they seem to just be sitting in plain sight. I take no solace in the fact that this is a kid’s game and these puzzles can be routinely solved by 8-year-olds.

With just a few exceptions, this game differs very little from any 'Lego' title that has come before it. Combat is austere, without much variation in the enemies. In many places they tend to stream out in unlimited numbers, which is annoying when I’m trying to solve a puzzle. Heroes can use one-button finishing moves and initiate combo attacks with other heroes. These are kind of cool but ultimately unhelpful, as most enemies can be dispatched with a single tap of the X button. The boss fights are less about fighting and more about using abilities smartly. Like the other puzzles, the solution is usually out in plain sight. 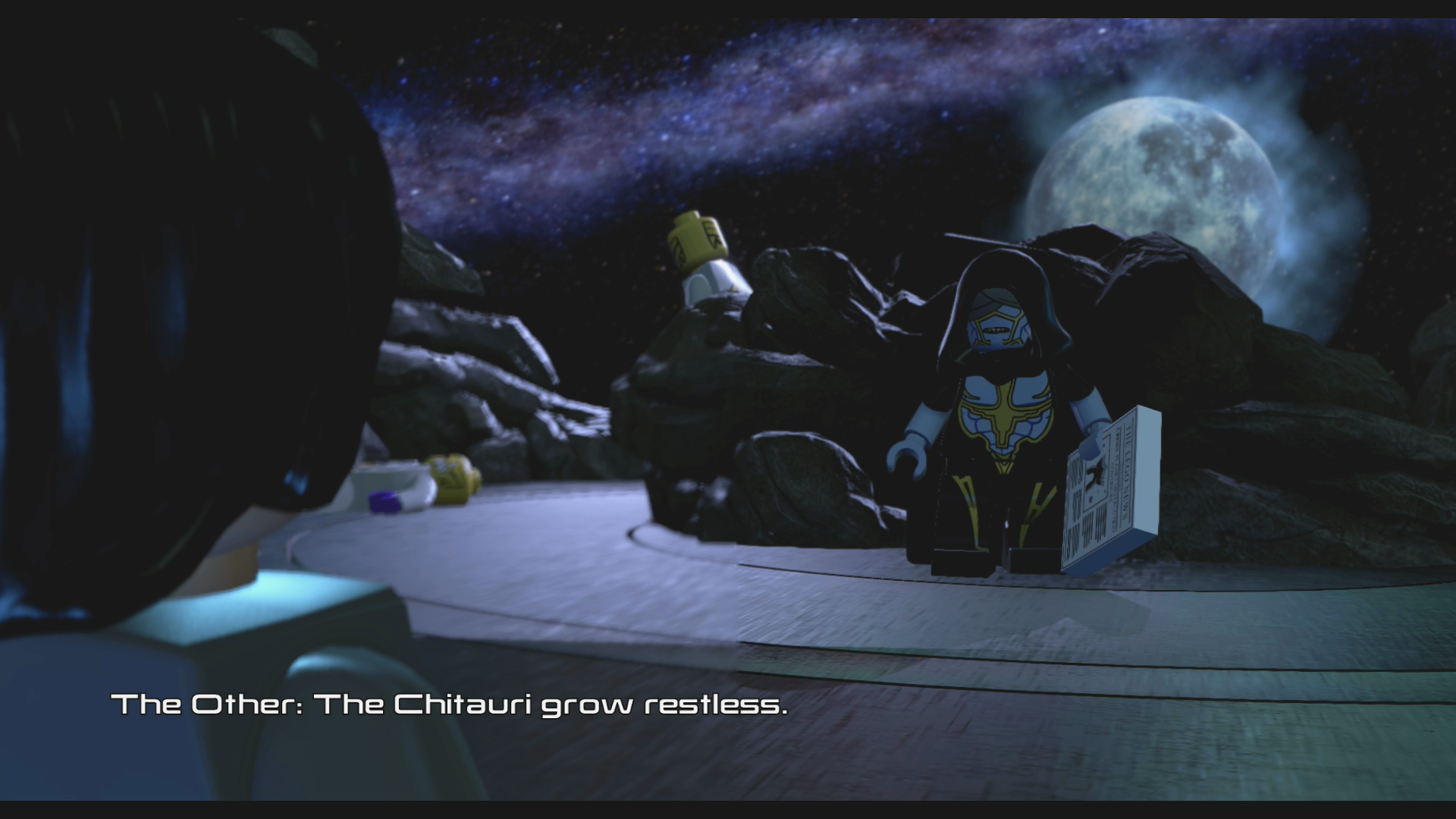 The storyline comes directly from the movies, but it’s disjointed and in a confusing order. Only devoted fans of the Marvel Cinematic Universe are going to understand what’s going on. Still, many iconic set pieces from the films have been faithfully recreated, like the helicarrier and the fight between the Avengers and Baron Strucker’s forces. In between some of the missions, a kind of open world hub will become available, complete with side missions provided by Agent Coulson. Vehicles can be driven, citizens can be helped, and collectibles can be collected, like Black Panther’s pack of cats. TT Games has experimented with this kind of configuration before, such as in 'Lego Jurassic World'. It offers a bit more freedom outside of the rote missions and some capacity for exploration. Even though the missions are chock full of hidden stuff, the maps are relatively small.

Mini-games abound, from a quick and common scanning interface to on-rails driving segments. Some missions have more than two characters or put the heroes in a separate activity, like Iron Man flying around and blowing up Ultron clones while Cap is fighting bad guys on the ground. Some are gimmicky but others are pretty fun. Despite the odd scene order, this does feel like an authentic 'Avengers' experience, albeit in toy form. It captures the great humor from the series and adds some slapstick of its own, which is good for some laughs, especially for younger players. Unfortunately, there's not much in the way of new video game content. 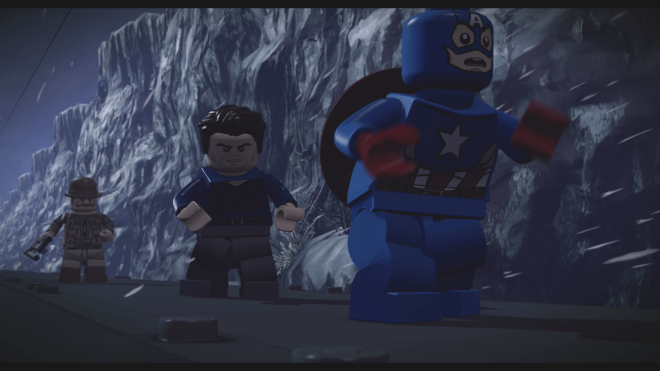 The 'Lego' engine seems to improve a little bit with each release. Lighting and shadows become crisper, textures are a slightly more detailed, and a few more assets can be presented on the screen at once. Other effects, like explosions, remain basic. Animations for the characters have been plucked straight from the films, like Black Widow’s strut and the way Coulson clasps his hands together when idle. 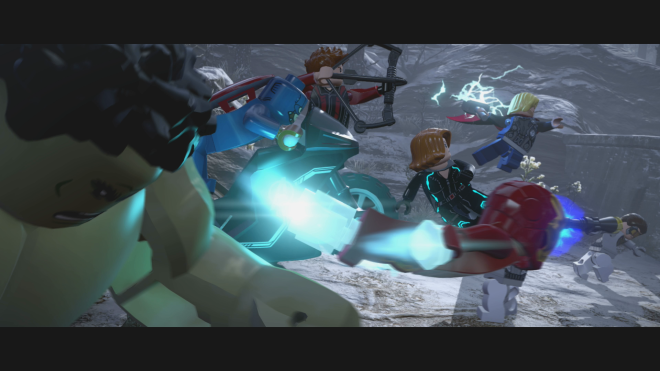 Dialogue has been lifted from the movies and placed into the game. It adds to the immersion to have Chris Evans and Robert Downey Jr. talking while I collect thousands of Lego studs and save Stan Lee from his own predicaments (also voiced by himself). Some characters have fresh voice actors, probably for licensing issues (Pepper Potts), while others have tapped their film actors for additional dialogue (Agent Coulson, Maria Hill). For some reason, the voice tracks have been layered at a very low volume. The epic score from the films has also been carried over.

There is a lot to do in 'Lego Marvel’s Avengers' beyond the 8-10 hour critical path. Stan Lee needs to be rescued for one, and there are plenty of collectibles that require a bit of work to unlock. Minikits are found in the levels in large amounts, and mostly found in free play because the mission characters don’t have the required abilities. The characters themselves are a form of collectible, although some are reskins and others are lamer Marvel heroes I’ve never heard of. Couch co-op is another fun diversion and very easy to use.

The 'Lego' games have always been a known quantity, but perhaps familiarity is beginning to breed contempt. 'Lego Marvel’s Avengers' wasn’t able to hold my attention as well as its forebears, even though it’s not a markedly different experience. Perhaps it’s time for the series to get a shot in the arm.