The Game Itself
4 Stars
The Video: Sizing Up the Picture
3 Stars
The Audio: Rating the Sound
3.5 Stars
Replay Factor
4.5 Stars
Bottom Line
Recommended

'Dragon's Dogma' was a bit of a flawed gem when it originally released back on Xbox 360 and PS3 in 2012. Within a year, fans were met with the expanded re-release in the form of 'Dark Arisen.' While it rectified a lot of the original game's issues, and added a fun new dungeon, it always felt like a game that was somewhat hampered by the consoles it released on, with technical flaws that still held it back from greatness.

Finally bringing the game to a new audience, Capcom seeks to deliver the definitive version of what could very well turn out to be a hit on PC.

'Dragon's Dogma', while clearly being heavily inspired by franchises such as 'The Elder Scrolls' and a whole host of other Western RPGs, feels shockingly unique because of how Capcom has approached the genre. The basic loop of an open-world RPG is there, you'll still be talking to dozens upon dozens of NPCs, working on hundreds of quests, and finding new armor and weapons for your character while exploring a whole host of dungeons, but everything about the execution feels totally fresh, even four years after its initial release. 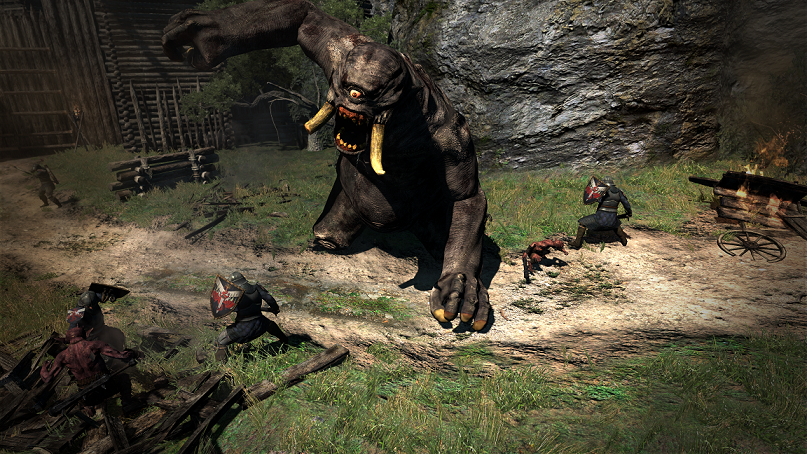 Instead of focusing entirely on one character, 'Dragon's Dogma' sees you in charge of a party of four characters. The player-made "Arisen", said to be the only person capable of killing a dragon that has plagued the country of Gransys, as well as three "pawns" who will accompany you throughout the game. One of these pawns can be created and customised just as thoroughly as your main character, but two others tie heavily into the game's online component. Hired pawns created by other players (or, for offline play, ones already placed in the game by Capcom) make up the remainder of your party. They'll never gain any experience, but they'll learn how to fight certain enemies and can be given items to take back to their creator. Swapping out pawns frequently to accomodate character level is vital, so the game heavily incentives constant co-operation with as many players as possible. This mechanic feels like a fresh take on party-based RPGs. Although it has some issues (for example, I really wish you could specifically tell pawns what to do, instead of just being able to give them basic orders such as "help!" "go!" or "come!"), the pawn system goes a long way toward separating 'DD' from just about any other RPG out there.

The prime pawn can even have their AI tweaked, which lets the player direct the character to priotise attacking stronger enemies in combat, or protecting the party, among other behavioural options. It's definitely a fun system, even if the execution can feel a little clunky. Pawns also frequently chat and give advice, but their chatter can be near-constant, and that means a lot of repeated voice clips during combat.

But even outside of the pawn system, combat in 'Dragon's Dogma' feels totally has a nice feel. The game was created by Hideaki Itsuno, who previously directed 'Devil May Cry 2', '3', and '4. His influence on the combat definitely shines through, as it's a really an action-heavy system that's both fast and extremely fun. Each character class in the game has access to unique skills that play completely differently from one another. Striders, for example, focus on quickly dashing between targets and attacking rapidly, with skills that allow them to double jump, cancel animations, and even launch enemies into the air before throwing explosives at them. Meanwhile, mages focus on ranged attacks, but they can also levitate, enhance party members with elemental buffs, and later on, get physical skills that can quickly destroy groups of enemies. Part of what makes the combat so fun is that every class feels totally worthwhile to play. I was confident that the mage class would be incredibly dull, but after a while, unlockable skills like lightning whips (one of the absolute coolest aspects of the game) totally changed my playstyle. Additionally, the game features a grab mechanic which is useful for taking hold of smaller enemies and allows party members to quickly kill the grabbed enemies while they are immobile, or to climb on top of larger enemies, scaling them and attacking individual body parts to cripple foes. The first time I fought a cyclops in the game and begin attacking its eye and tusks, for example, was a wonderful highlight, and I really feel like this approach to bosses helps give the combat a sense of scale that isn't often seen in WRPGs. 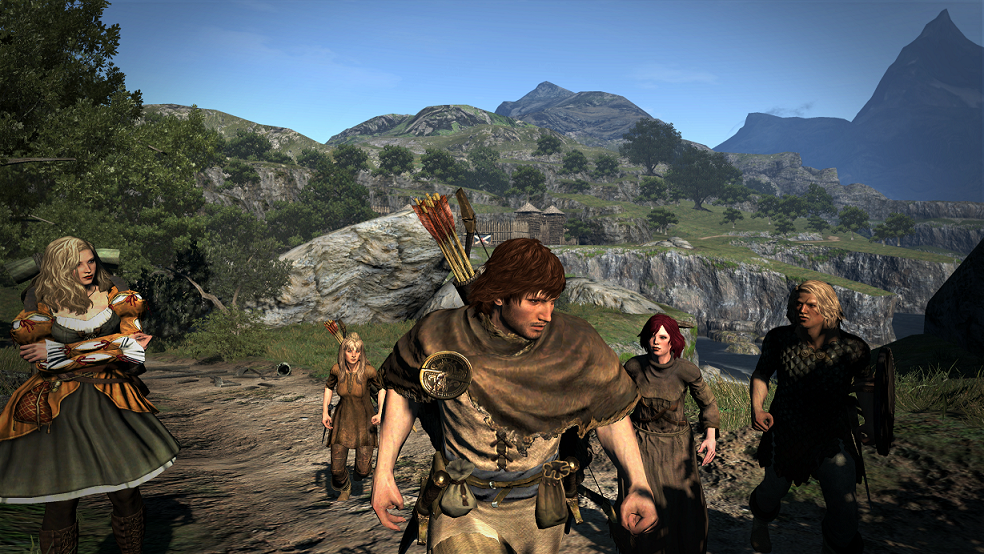 The game certainly isn't without its issues though. The game doesn't have a particularly good fast travel system, only allowing players to travel between certain cities and towns, or to waypoints you place down yourself using extremely rare items. As a result, there can be a tad too much backtracking. Additionally, many of the quests boil down to simple "kill x amounts of y" or escort missions. The game's story, too, is almost entirely devoid of interesting moments, feeling largely like an excuse to funnel players from quest to quest. There are a few interesting concepts here and there, but they're largely few and far between.

Thankfully, this is a nicely designed PC port. Full controller support is readily available (outside of text entry when naming characters, inexplicable, but also typical), and the framerate easily achieves a constant 60FPS, with the option to unlock the framerate. This is a well-optimized port, and I was able to play on max settings with only the slightest dips in performance in a couple of densely-packed areas on a PC that's a couple years old at this point. On a technical level, this is a terrific port. 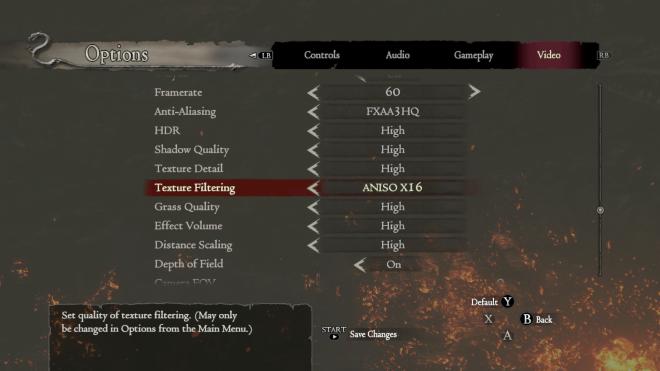 The PC version of 'Dark Arisen' is certainly the best looking version of the game to date. The draw distance has been greatly expanded, and textures look slightly better than the original console release.

Unfortunately, the game's base visuals are showing their age. Character models look ugly and towns feel largely generic and dull. Combat animations can look fantastic, and some of the monster designs are really great, but it's definitely not a particularly pretty game. Additionally, cutscenes look strangely compressed, and subtitles can look blurry in places. 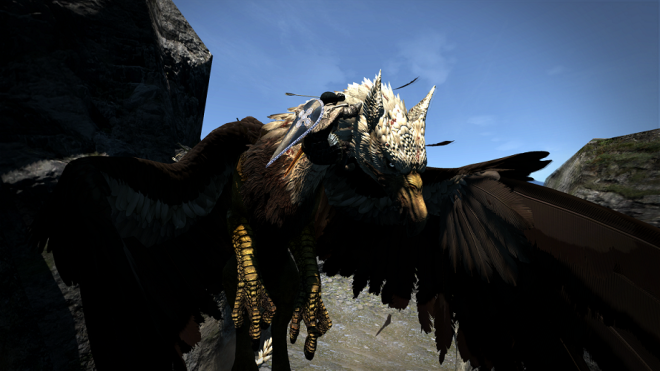 'Dragon's Dogma' has a surprisingly good soundtrack, even if it often falls into typical fantasy tropes. It's a really diverse soundtrack that can be incredibly exciting when it needs to. The game is let down somewhat by voice acting that feels OK at best (though, to be fair, I suspect a lot of that may have to do with the somewhat awkwardly written script that forces Shakespearean dialogue in at every possible turn) as well as voice clips that repeat far too often (you'll hear "They're masterworks all, you can't go wrong" hundreds of times), but it doesn't ruin the great work put into the music.

This PC release features every bit of DLC from both the base game and 'Dark Arisen' there's plenty to do here. With several character classes to level, multiple post game dungeons, and an insane amount of quests, there's enough content to last hundreds of hours here. 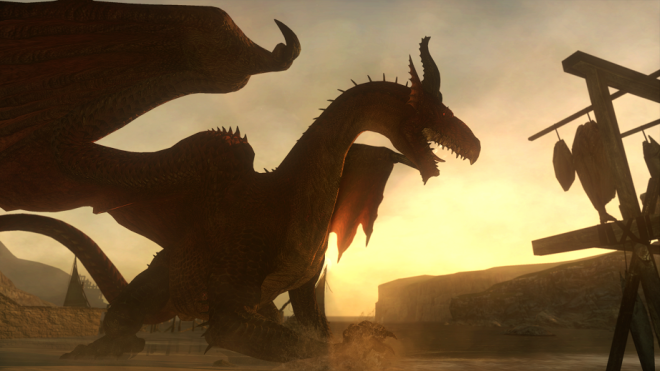 In spite of some odd quirks, and a little bit of age starting to show, 'Dragon's Dogma: Dark Arisen' still feels incredibly fresh, is tons of fun to play, and is a great addition to the wealth of the PC platform. It can take a little while before things really start to get going, but once they do, it's a compelling game that has a lot to love for both action and RPG fans. If there's ever going to be a 'Dragon's Dogma 2', it could turn out to be something of a masterpiece.