Butterscotch Shenanigans consists of Adam, Sam, and Seth Coster, three brothers based in St. Louis, Missouri. 'Crashlands' began its life in 2013 after the brothers abandoned an endless runner they had been working on, and it was greenlit on Steam last year. The PC version is accompanied by Android and iOS editions, which support cross play.

To call 'Crashlands' a crafting game would be painting it with a very narrow brush. It certainly is a crafting game, but it’s also an adventure, RPG, looting, and action game. The recipe is the same thing we’ve seen before from the likes of 'Minecraft' and especially 'Don’t Starve', but 'Crashlands' has very different ingredients in that recipe. Most importantly, it has quests. These aren’t something I have come to expect from the genre, which has a reputation for vast open worlds that serve as a canvas for the player's creativity. The quests could be accurately described as a tutorial, which isn’t strictly necessary for a game focused on exploration, but they also inject a wacky, hilarious script and personality into 'Crashlands'.

The game starts as a pair of interstellar couriers, Flux and her robotic sidekick Juicebox, are waylaid while delivering some space stuff in their spaceship. A giant, disembodied alien head calling itself Hewgodooko steals some of their ship components, crash landing them on the nearby planet of Woanope. With only a few tools and Juicebox’s computer brain, I started my business of crafting. First some floor, then a crafting station, better weapons and armor, and so on. 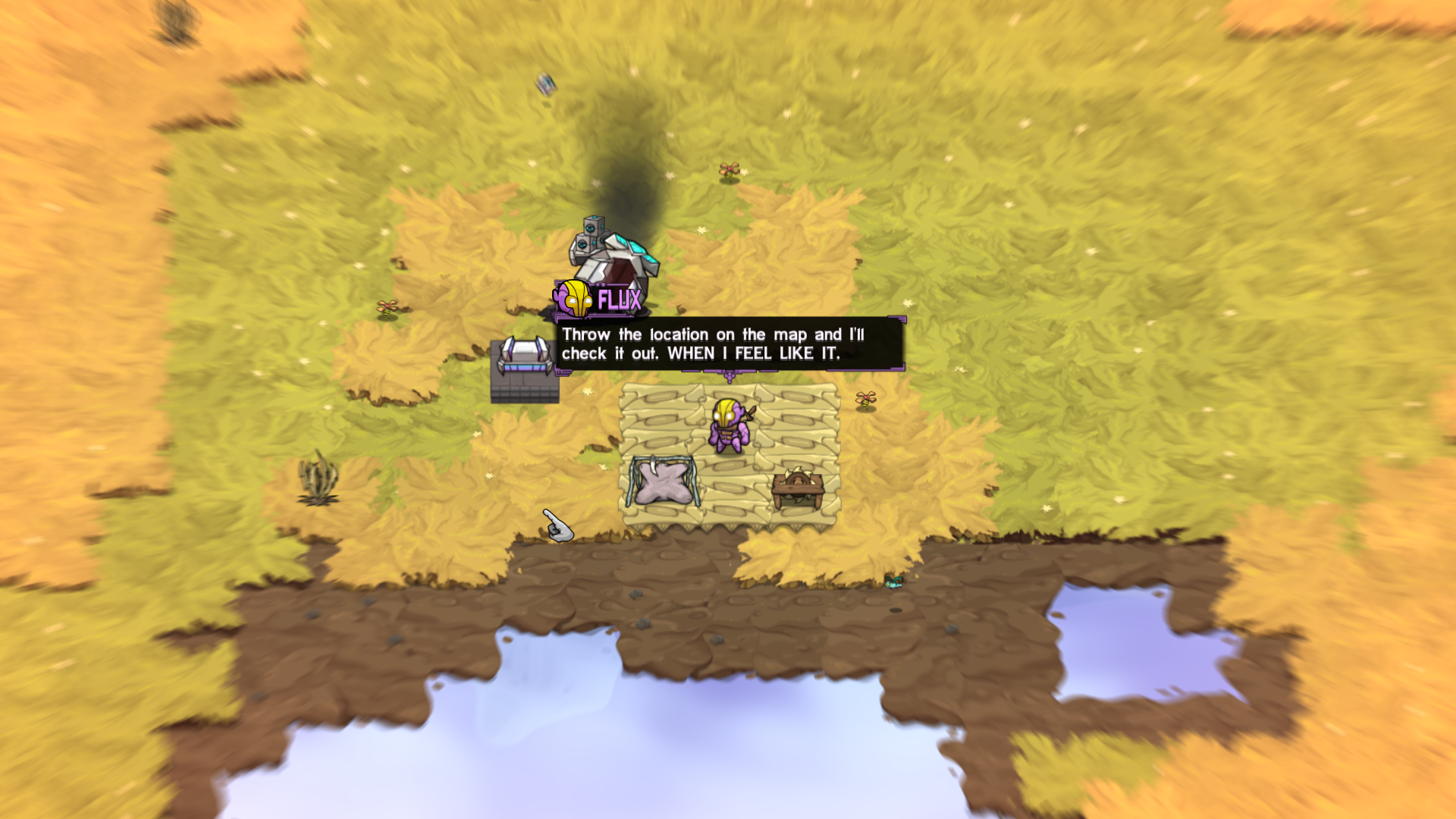 Flux and Juicebox are pretty cheerful for being dumped on an unexplored alien planet with only a few gadgets to their name. They happily help out the natives with their tasks, like making pinwheels, destroying colonies of invasive critters, and delivering lots of stuff. There is the usual amount of fetch quests, but they often rewarded me with valuable schematics, so I rarely got bored. As for the script, it’s zany and witty in a lighthearted way, with the occasional silly innuendo.

The game was pretty slow for the first hour, but after I had a few crafting tables under my belt, it started to get awesome. The volume of recipes grew to unwieldy levels and I was taught how to tame and upgrade animal companions, which can have their own equipment. Plants can be planted, tools can be upgraded, and for the decorators, there are many ornamental blueprints available. Schematics are given by NPCs and can also be found underneath resources, rewarding those who enjoy simply running around and smashing rocks and trees. Weapons and armor have randomized stats and improve slightly each time they’re crafted. 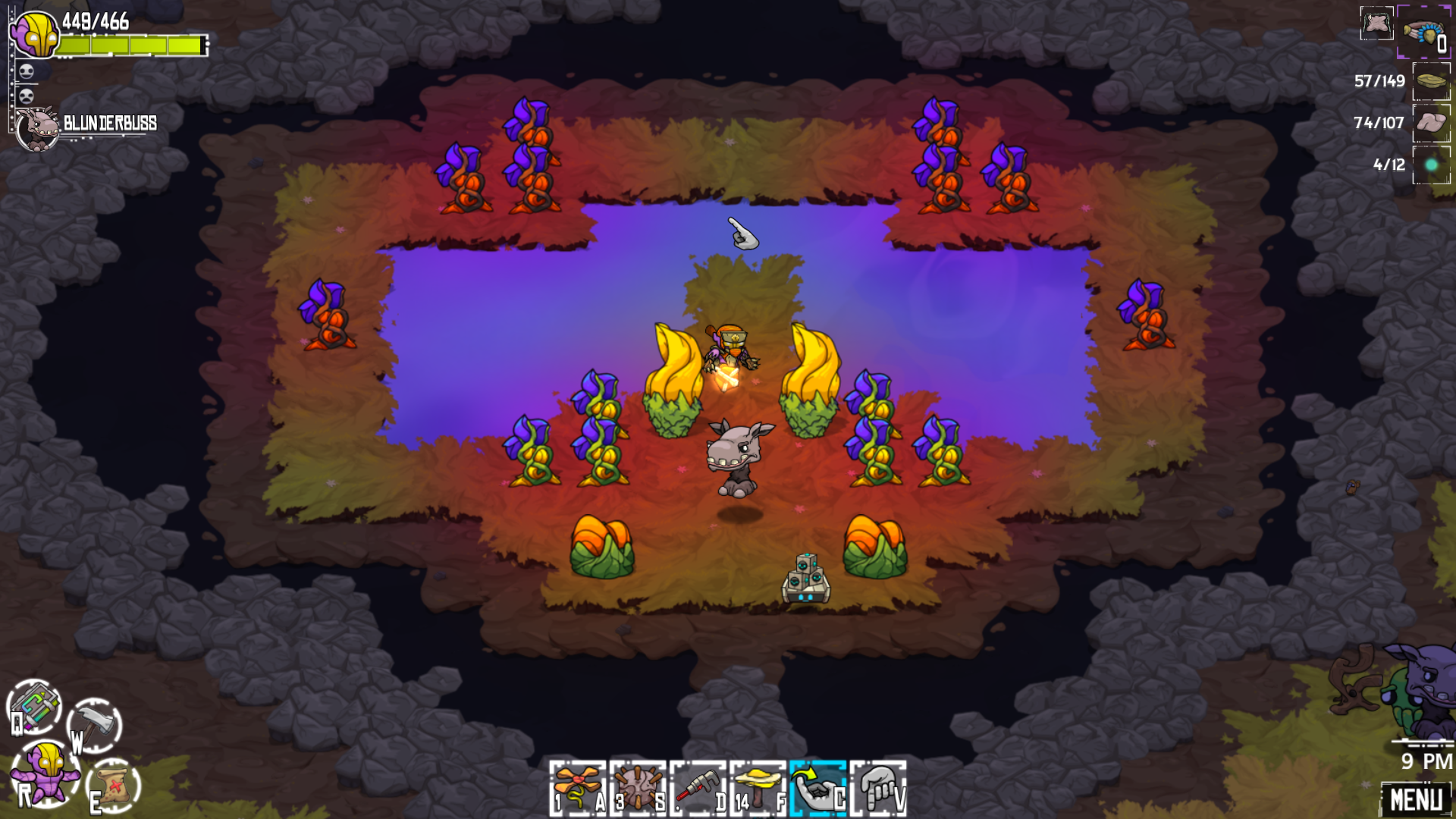 'Crashlands' has a lot of little conveniences that make its gameplay easier to enjoy. Teleportation can be done just about anywhere, back to the home base or to any of the pads found all across the landscape. Unwanted weapons and other items can be salvaged into raw materials. Death is not permanent, and all that is lost is a small bundle of raw materials each time. My gravestone was marked on the map for easy retrieval. These accommodations make the game less hardcore than crafting enthusiasts may be accustomed to, but the combat still provides an appreciable level of difficulty. Local fauna have predictable attack patterns, but my one-on-one fights often turned into large brawls as nearby creatures joined the fray, creating an unwieldy bedlam. When the animals proved to be too powerful, I would step out from the quests and spend some time foraging for a better set of armor or other upgrades. 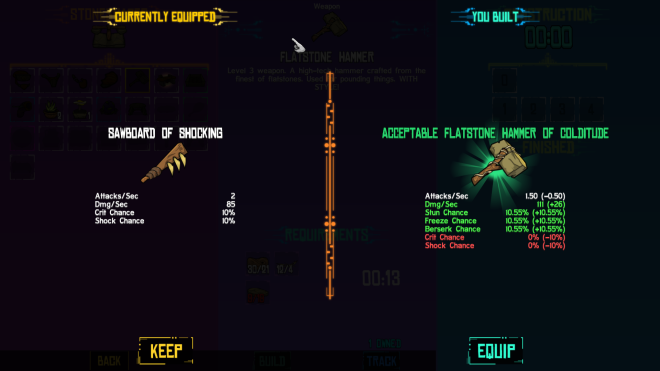 'Crashlands' has a colorful and vivid palette, with cutesy, cartoonish characters and whimsical animations. All of the cutscenes are in-engine and usually quick, which I appreciated as I was keen to get back into the gameplay. Some textures are fuzzy, like the menus and map, but the game has almost no slowdowns. 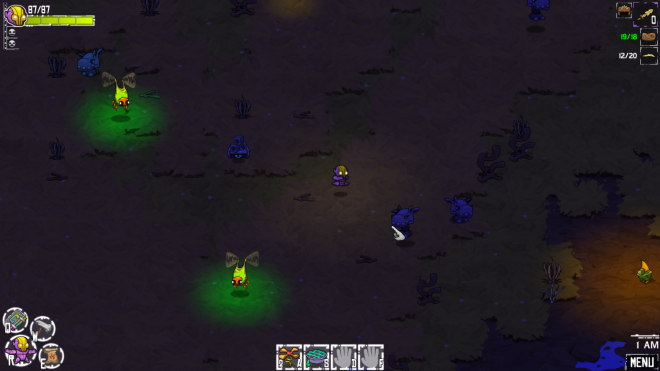 The music, done by St. Louis-based Fat Bard, is a winning mixture of upbeat, high-tempo chiptunes and more easygoing instrumentals. The theme song in particular is amazing. The duo also did the sound effects, which are evocative of the older games that inspired Butterscotch.

While the quests are important, it is easy to get lost in the open world of Woanope. I wandered around on my own missions, losing track of time while I dueled boss monsters, collected obscure junk, and generally had a ball. As if I wasn’t spending too much time on it already, 'Crashlands' supports cross-platform cloud saves. PC saves can be picked up on the mobile versions and vice versa. 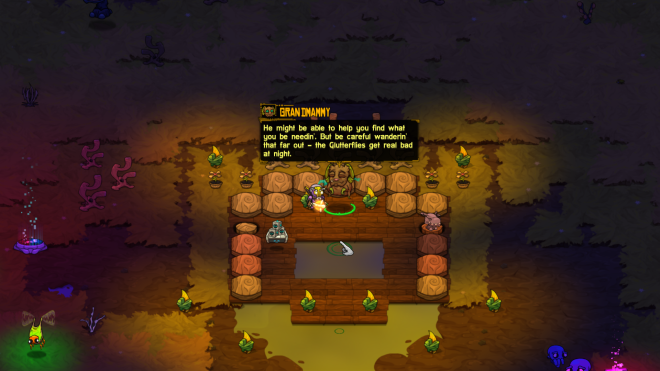 'Crashlands' has heart and soul in spades. It is capricious, engrossing, and highly addictive. It has such a pleasant mix of genres that it can be appealing to a wide variety of gamers, not just the ones who enjoy a good craft. Its flaws, like the slow start and smudgy menus, are small and easily overlooked.