'Darkest Dungeon' is a roguelike turn-based RPG and was Kickstarted in February of 2014 by Red Hook Studios, with a respectable gross of over $300,000. A year later it was made available in Steam's Early Access, and now it has a full PC release. PS4, Vita, and Linux editions have all been announced.

Most fantasy stories portray adventuring as an easy, even glamorous profession. These heroic badasses frequently swagger into labryinths, smash all the bad guys, steal all the loot, and when necessary, resurrect themselves with reckless abandon. But usually, these heroes are human beings. Humans can become frightened, they can have doubts, they can lose their minds and even betray their allies when their survival is threatened. They can succumb to post-traumatic stress after particularly harrowing experiences. These traits are at odds with the daring depictions of heroic characters, and so they are glossed over or sugarcoated. In 'Darkest Dungeon', they are an integral part of the game. 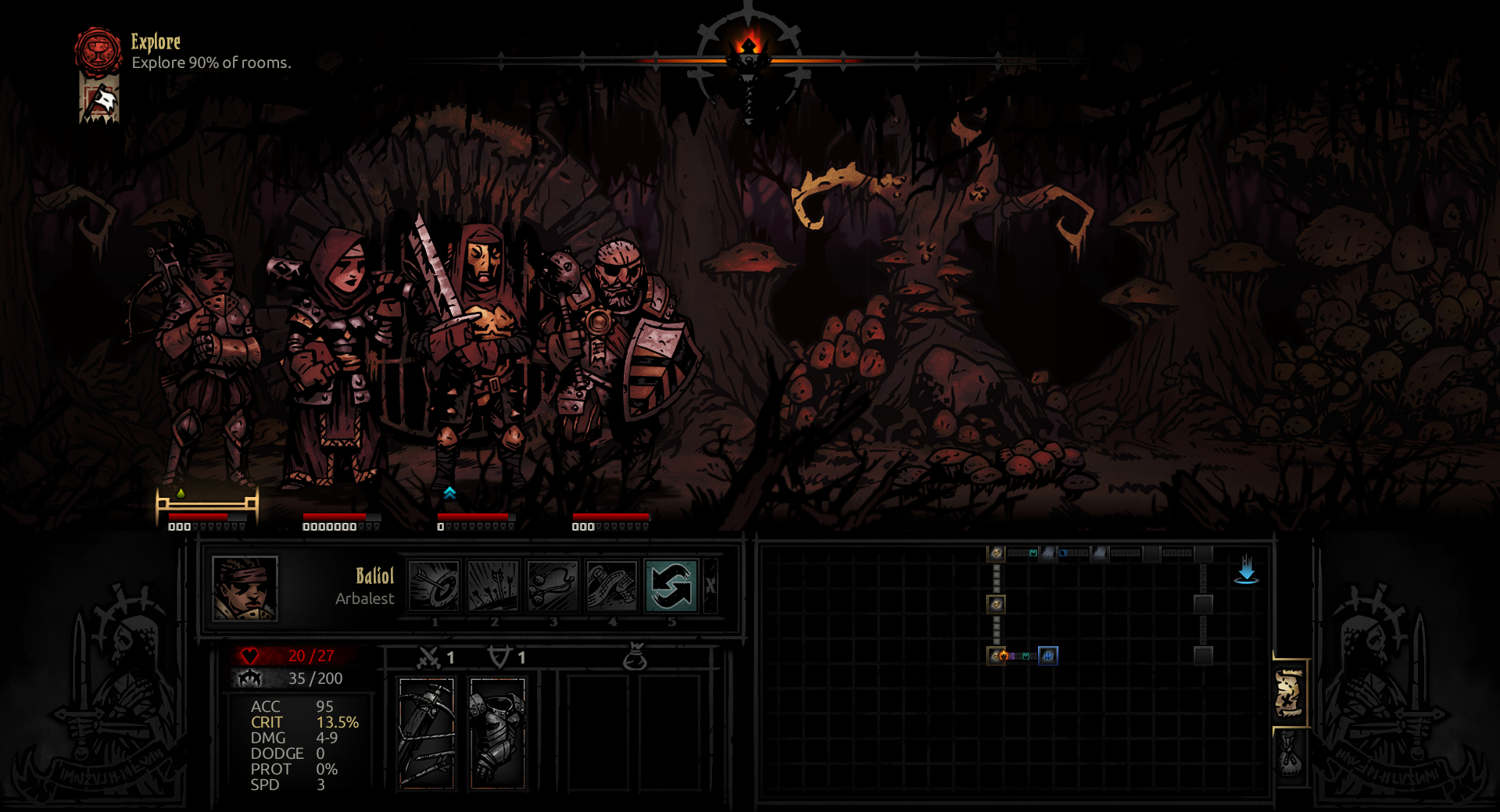 Before the events of the narrative, the player character's long-lost relative contacts them via letter, explaining that he has done something horribly wrong and paid for it dearly. He was a bored, jaded nobleman, and one day decided to investigate the rumors of an interdimensional portal underneath his castle. The rumors were true, and he unleashed a grotesque, terrifying horde of creatures on the surrounding countryside. The horrors were enough to drive him mad, and after summoning his estranged relative, he commits suicide.

Upon arrival in the hamlet beneath the hills of the haunted family mansion, I was given a small group of adventurers and a bleak message from the game itself, informing me that bad things were going to happen. I collected my eager, fresh band of heroes and an assortment of provisions (no Xanax, unfortunately), and then descended into the darkness for glory and treasure. Well, that’s what I hoped to find - more often I found derangement and despair. Every mission in 'Darkest Dungeon' is randomly generated, with new rooms and hallways filled with curios, wealth, traps, and monsters. Whenever I reached a chest, corpse, or bookshelf to investigate, random effects would occur depending on my party’s statistics and provisions. Sometimes we were awarded some gold, or a trap would spring and inflict a party member with a terrible disease. Most of these encounters are avoidable, but the fights are not. 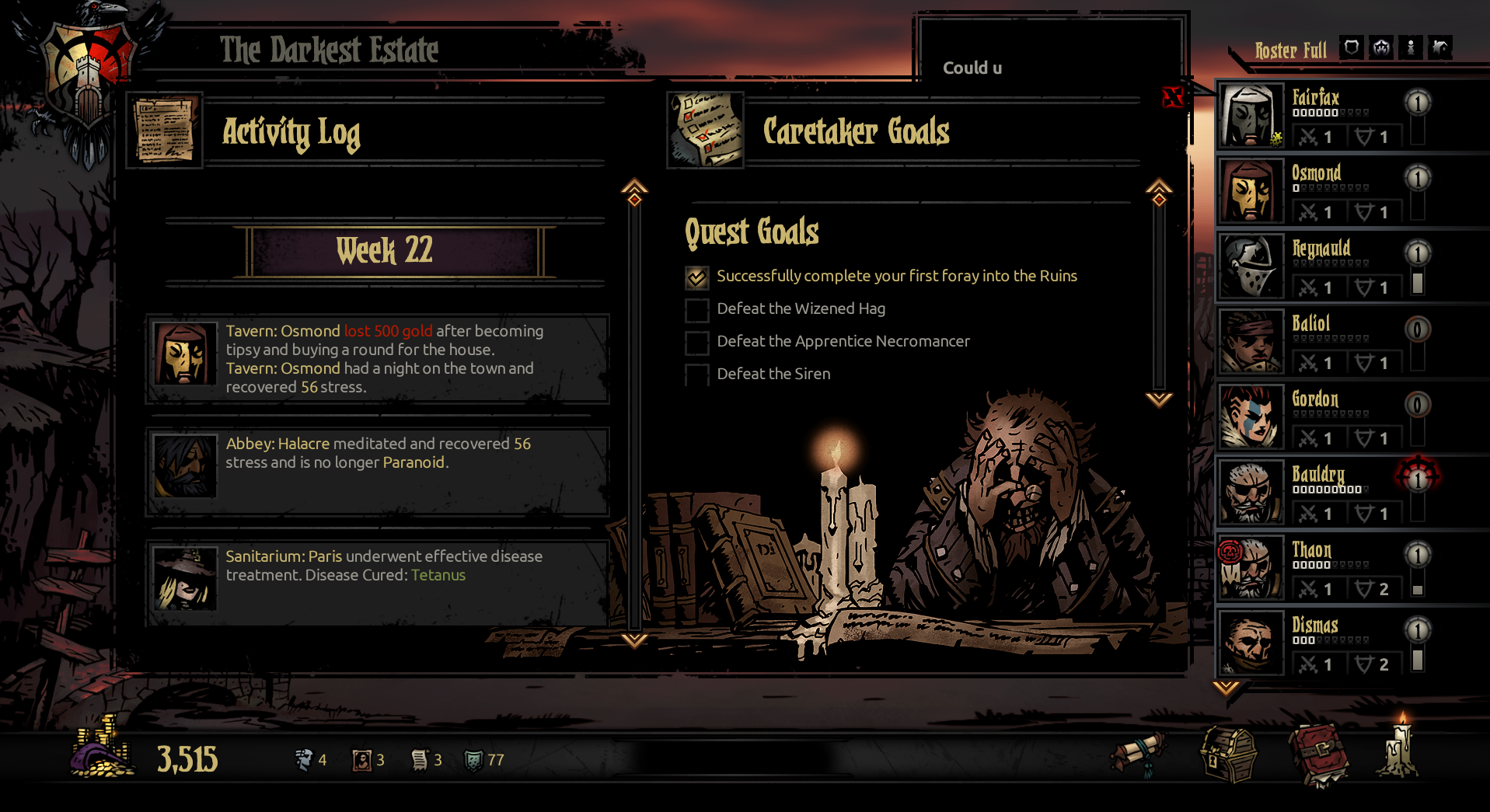 Instead of the tiles found in earlier roguelikes, 'Darkest Dungeon' uses a two-dimensional presentation. During fights, my party of four was arranged to the left of the enemy party of 1-4, and opportunities are determined by the placement of a character within the formation. My arbalest-bearer, for instance, is better towards the back of the party, where she has enough room to shoot her crossbow. The healers like to be in the middle, and the paladins and shieldbearers belong up front. Party abilities can synergize with each other for tactical advantages - the jester can shuffle the party around and open up combo opportunities, while the bounty hunter can "mark" targets for big bonuses from other members. Of course, enemies can also do these things, and they have an AI capable of taking every possible advantage.

It’s not just the health of my heroes that I’m concerned with. Some enemies, as well as the conditions of the dungeon, can inflict stress damage. Stress is a secondary form of damage that, if accumulated too quickly, will generate quirks, neurotic tendencies, and downright psychosis. My heroes would crack when the burden got too high and lose their nerve, suffering from masochism, selfishness, or other maladies, which can lead to lost turns and increased stress on their allies. One of my first paladins, Reynauld, is a degenerate kleptomaniac, prone to stealing treasure in the field and keeping it for himself. One of my healers has an obsession with sainthood and takes every opportunity to martyr herself. My favorite highwayman suffers from alcoholism, and so on and so forth. These afflictions, as well as the myriad diseases that can be contracted in these filthy environments, can all be cured at the local sanitarium - for a price. Stress can be reduced via religious devotion and nighttime revelry, but all of this is only possible for heroes who are actually able to survive the expedition, which is a tall order. Heroes who die are permanently lost, but green recruits arrive weekly in the village. Little did they know they would become just another resource to me, as expendable as the torches and rations that accompanied them on their forays. 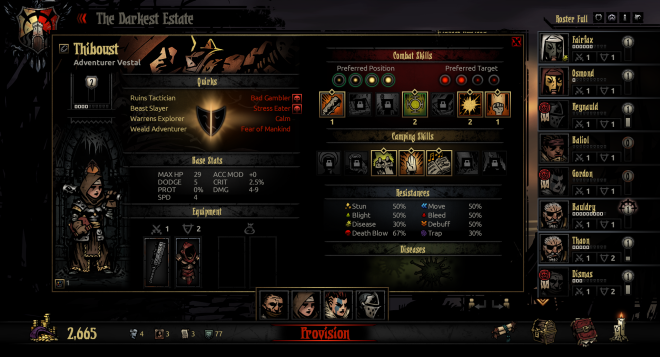 'Darkest Dungeon' is a mixture of stylish comic-like characters and a dark, gothic environment. The fingerprints of Lovecraft and Poe can be seen everywhere, from the tentacled monsters of the cove to the iron bars of the asylum. The effects match the theme perfectly - during battles, fighters cut into the foreground when they attack, and their model switches to a horrified grimace when something bad happens, like losing their mind. Movement animations are simple, but the character models are very detailed in their 2D way. 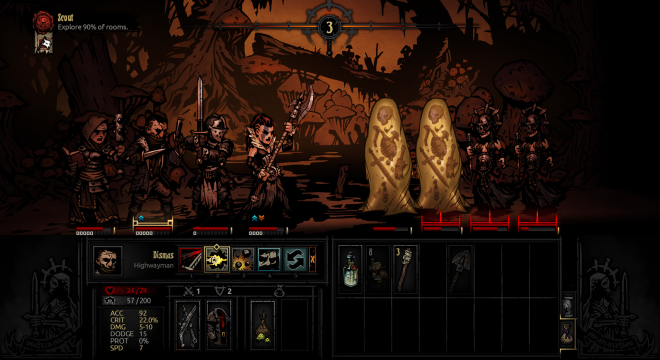 The music was composed by Canadian musician Stuart Chatwood, who also worked on 'Prince of Persia: The Sands of Time'. It is heavy on the strings and Victorian flavor, and like the gameplay, is deep, dark, and depressing. The narrator (whose character is the dead former proprietor of the castle) is the only voice besides enemy barks, and his pained, guttural delivery is excellent.

Its thick roguelike influences means that 'Darkest Dungeon' is the kind of game that thrives when it is played over and over. Every dungeon is procedurally generated, every chest has a chance at strange fortune, and every new character offers a different set of abilities. Even when times are tough (and they will be tough, I assure you) upgrades can be made to the village facilities that slowly improve the heroes’ quality of life and chance at survival. In turn, the dungeons also get more challenging. 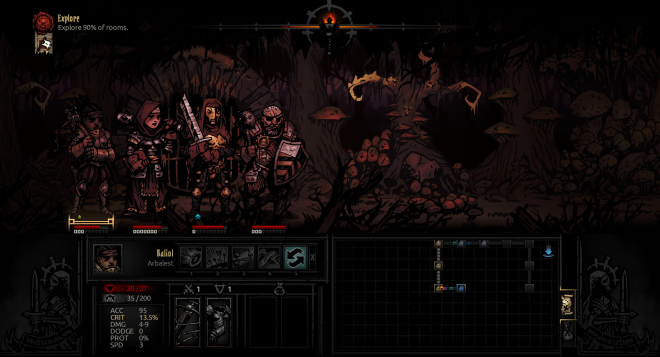 'Darkest Dungeon' is the rare game that gets my heart pumping while playing, not because it’s scary (even though it is a little scary), but because the stakes are so high. One battle can make the difference between waltzing out flush with loot, and returning home defeated, with the party dead or completely insane. It will punish your mistakes and it will even punish your good fortune, on the rare occasion it happens. Despite all of this, or perhaps because of it, I cannot seem to stop playing 'Darkest Dungeon'.