The Game Itself
3 Stars
The Video: Sizing Up the Picture
4 Stars
The Audio: Rating the Sound
2.5 Stars
Replay Factor
1.5 Stars
Bottom Line
Worth a Look

'The Witness' was developed by Thekla, a small team led by Jonathan Blow. Blow’s last game was 2008's 'Braid', a heartfelt puzzle platformer that was a resounding hit on Xbox Live. The setting for 'The Witness' is a strange island full of puzzles where the player wakes alone. 'The Witness' is currently available for PC and PS4, with a planned iOS release. The PS4 exclusivity is limited.

'The Witness' is an open world puzzle game, although it defies all attempts at easy categorization. My character is a nameless person who appears to be stranded alone on an island. The island has many small but cultivated biomes, such as a bright pink orchard, a boathouse on a small peninsula, and a castle. Cables snake around and over everything in sight, all connected together into some kind of machine that requires power, achieved by activating panels. There are hundreds of these panels on the island, and each one has a puzzle. Usually the puzzle is solved by tracing a path through a grid of some kind, sometimes passing through certain dots, sometimes with a second line mirroring the first. Once the puzzle is solved, a cable lights up and it can be followed to another panel where the cycle can begin anew.

On the whole, the game has a very simple premise and almost no interface, especially when it comes to visual UI. Traditional video game elements are absent, like a map, journal, or tutorial. The first few puzzles are really simple, but that's all the introduction I would get. I suppose I’m meant to wander around the island, solving line puzzles here and there and ponder the meaning of life. Occasionally I would find an audio log, which would chatter on about the infinite nature of God or quote an ancient Buddhist philosopher. 'The Witness' is a perplexing, enigmatic experience, to be sure. 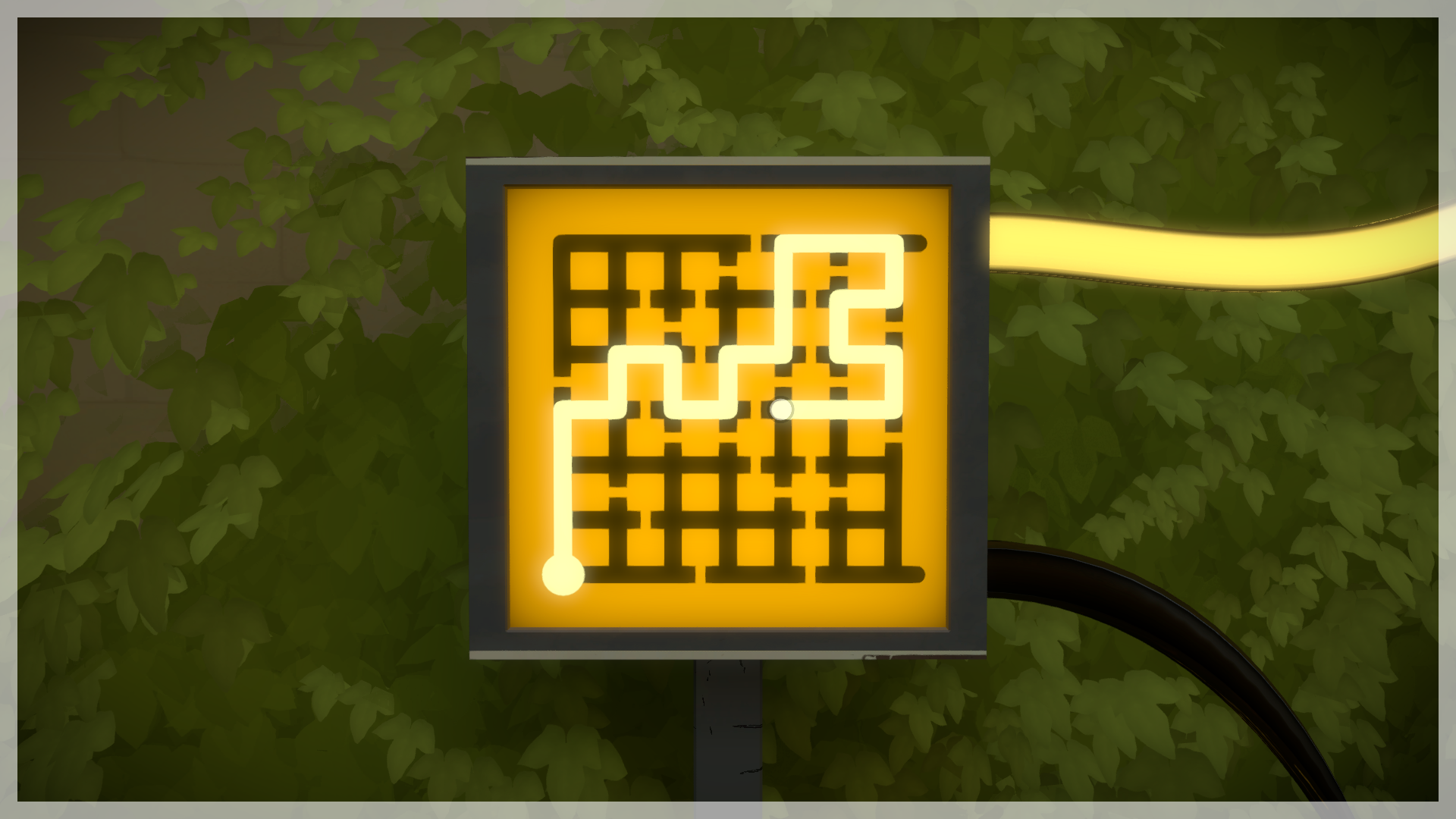 I don’t necessarily need a lot of direction from games, but I do need some kind of impetus or push to keep going. In the case of open worlds, this can come in the form of some sense of achievement or accomplishment, not by completing objectives, but by learning and exploring. This is one of the main issues I had with 'The Witness'. I never felt like I was going anywhere, even though a lot of the gameplay is walking. I never felt like I was doing anything more compelling than tracing patterns on a matrix. The puzzles are arranged in sets, and even after completing a particularly mind-bending one, all I would receive was an open door, usually to more puzzles. Sometimes a laser beam would rise out of the earth and point towards a mountain in the distance. When I arrived at the mountain, I found dead panels and a collection of human statues in various poses. What does it all mean? Who can say, but I need to trace more lines to figure it out. 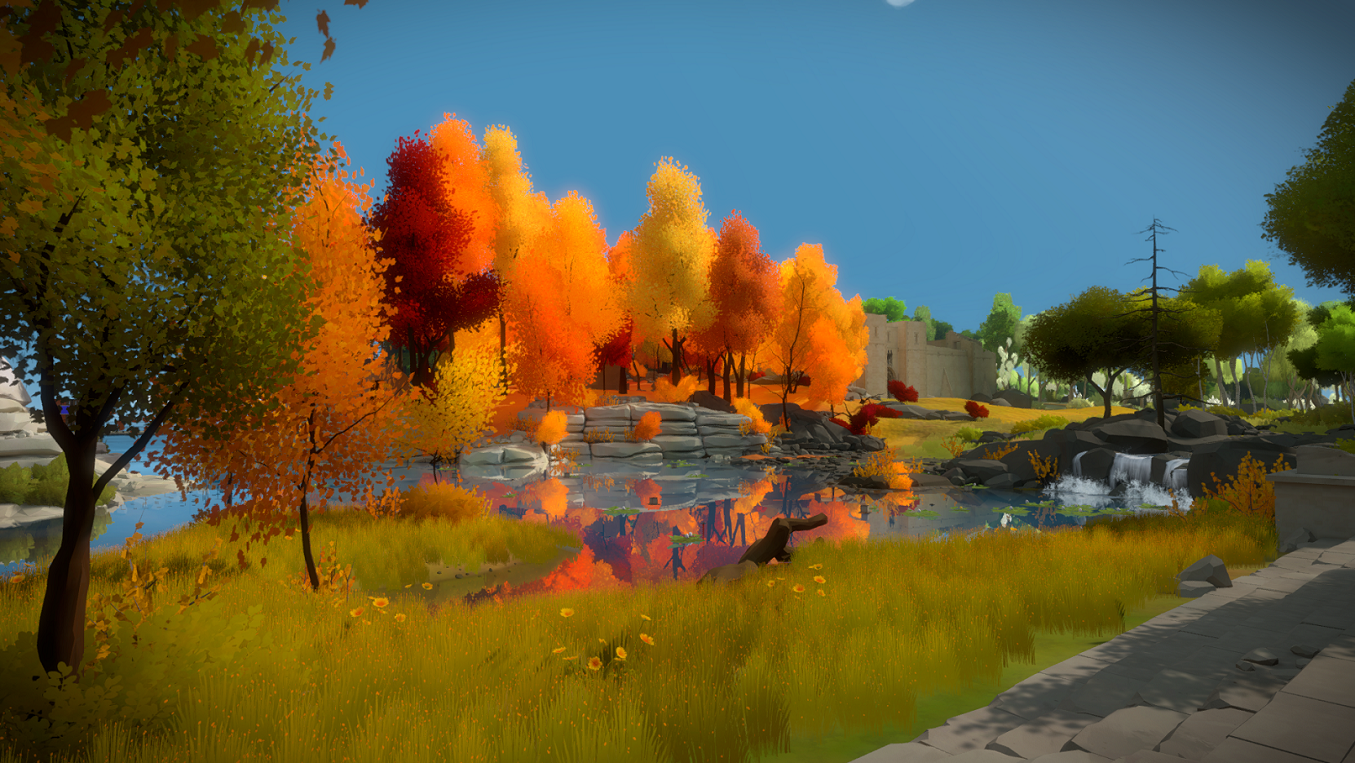 As for the puzzles themselves, they are sometimes interesting, often challenging, and ultimately repetitive. A set of them will have some kind of unique design, like having to pass through specific shapes on the board before proceeding to the exit. Throughout the set, this design becomes increasingly difficult to fulfill, and the very last puzzle in a set is mystifying. There is a moment of pride upon completing a particularly difficult set, but it’s fleeting, because my only reward is another lit cable. Some puzzles are solved with clues from the environment, which I won’t discuss further because I would hate to give away any solutions. The more advanced grids combine mechanics from several different sets, and I’m not too proud to say that sometimes I walked away from them in frustration. This was especially true when failing a puzzle would deactivate the cable connecting it to the last one, forcing me to backtrack and solve the previous one again. Brute forcing the solutions is only possible in some of the grids and I tried that too when I could, which I admit sounds cheap but it’s probably better than watching a YouTube video. 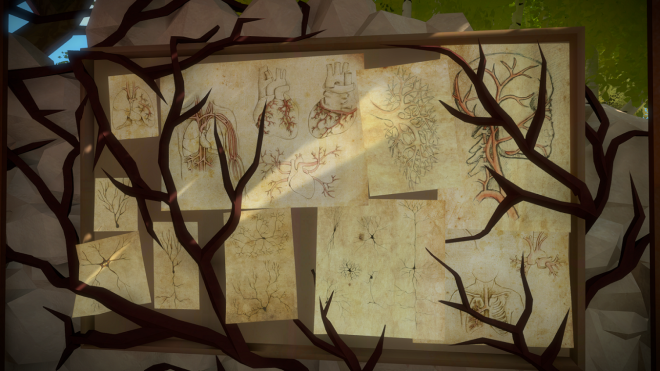 'The Witness' doesn't have the most advanced visuals from a technical standpoint, but that’s not to say it’s not beautiful. The environment has a moderately cel-shaded look that is lovely. It has an ethereal, otherworldly quality, but doesn’t go into the realm of the cartoon or science fiction. Lavishly colorful forests are joined by desolate deserts and austere underground passages. Ponds of strangely colored water dot the landscape - some blue, some purple, and one blood red. Some parts of the island are natural, with few man-made features, while others are constructed. There are no platforming aspects of any kind, and no way to die, as I learned when I tried to jump from the mountain in frustration after getting the cold shoulder from a set of puzzles. 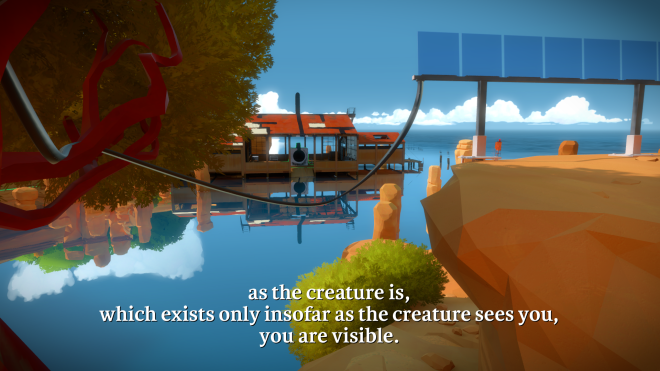 This is a very quiet game, with no music. Exaggerated ambience has been exchanged for a much more serene and isolated soundscape. The only sounds are my footsteps and occasionally the ocean or a bird. Picking up an audio log plays a bored woman’s voice as she reads an abstract, nearly nonsensical passage.

The puzzles lose their luster after a time, but there are some 600 of them to be found on the map, and some are rather hard to locate. Depending on how easy it is for you to solve them, you could be playing the 'The Witness' for a very long time, which could be a good or bad thing. Perhaps it could be used as a meditative experience. 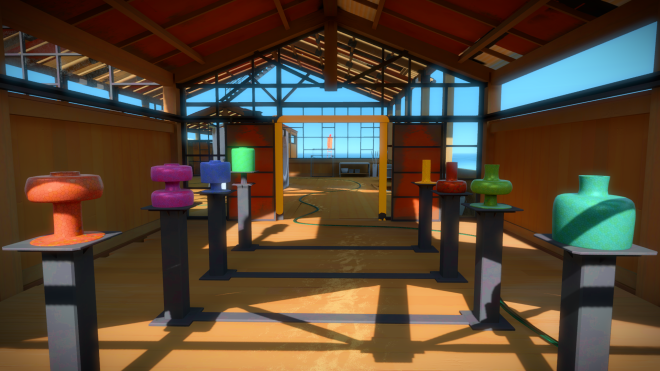 Video games are unequivocally a form of art. But like all art, the beauty is in the eye of the beholder. With 'The Witness' I feel like I’m in an art gallery watching a gaggle of admirers who are looking at a piece together, commenting on its style and how it makes them feel. I’m the guy standing off to the side, not with them but looking at the same painting. I can admit that it’s pretty, but it doesn’t really evoke a significant response, and so I shrug and move on to the next.