The Game Itself
3.5 Stars
The Video: Sizing Up the Picture
4 Stars
The Audio: Rating the Sound
3 Stars
Replay Factor
3 Stars
Bottom Line
Recommended

'DOOM.' The classic first-person shooter that defined, cemented, and revolutionized a genre like few games do. A true game changer, if that weren’t a horrible pun. With countless rereleases and spin-offs ("The Capcom Syndrome" in gaming jargon), it's quite humorous to realize 'DOOM' – the game we’re dissecting today – is "just" the fourth main entry, in a franchise that’s rapidly approaching its quarter of a century age. So does this new 'DOOM' have what it takes to appeal to both old and new fans, or does it tarnish the legacy of its influential great-grandfather?

'DOOM' is a fast twitch shooter, with no regenerating health which means no rest for the wicked. I had to stay alert and always be on the move, if I wanted to avoid being swamped and run over by monsters from all sides. Foes try to push the main character in a corner. But the frantic, frenetic pace makes the game strategic: I learned how to use the surroundings, parkour, hide, run, etcetera. "Because we’re being hunted," as Robert Muldoon would say. By clever girls, I might add.

Menu options are Multiplayer, Campaign and SnapMap. Let’s try Campaign first. Difficulty selections are called "I'm too young to die" for easy, "Hurt me plenty" for normal, and "Ultra-violence" for hard. That last one could have been funnier, but the first two are genuinely good jokes. At certain points in the game, the claustrophobia is very tangible. It provides the proceedings with a very ambient, wicked atmosphere, be it outside with desolate landscapes or inside with high-concept tunnels and corridors.

Comparing this 'DOOM' to other titles in the long-running franchise reveals little to no difference in the baseline. The basic principles are at play: shoot the monsters, find the key cards, look for the exit, proceed to the next level. Just like with the previous titles in the series, monster murmuring and noises will be heard when the monster is nowhere to be seen. Ready to sneak up and pounce, just like Bill Watterson’s Hobbes. The unseen danger is always more effective ('Jaws,' 'Duel'). Dying results in a spontaneous combustion that’s quite awesome to witness. 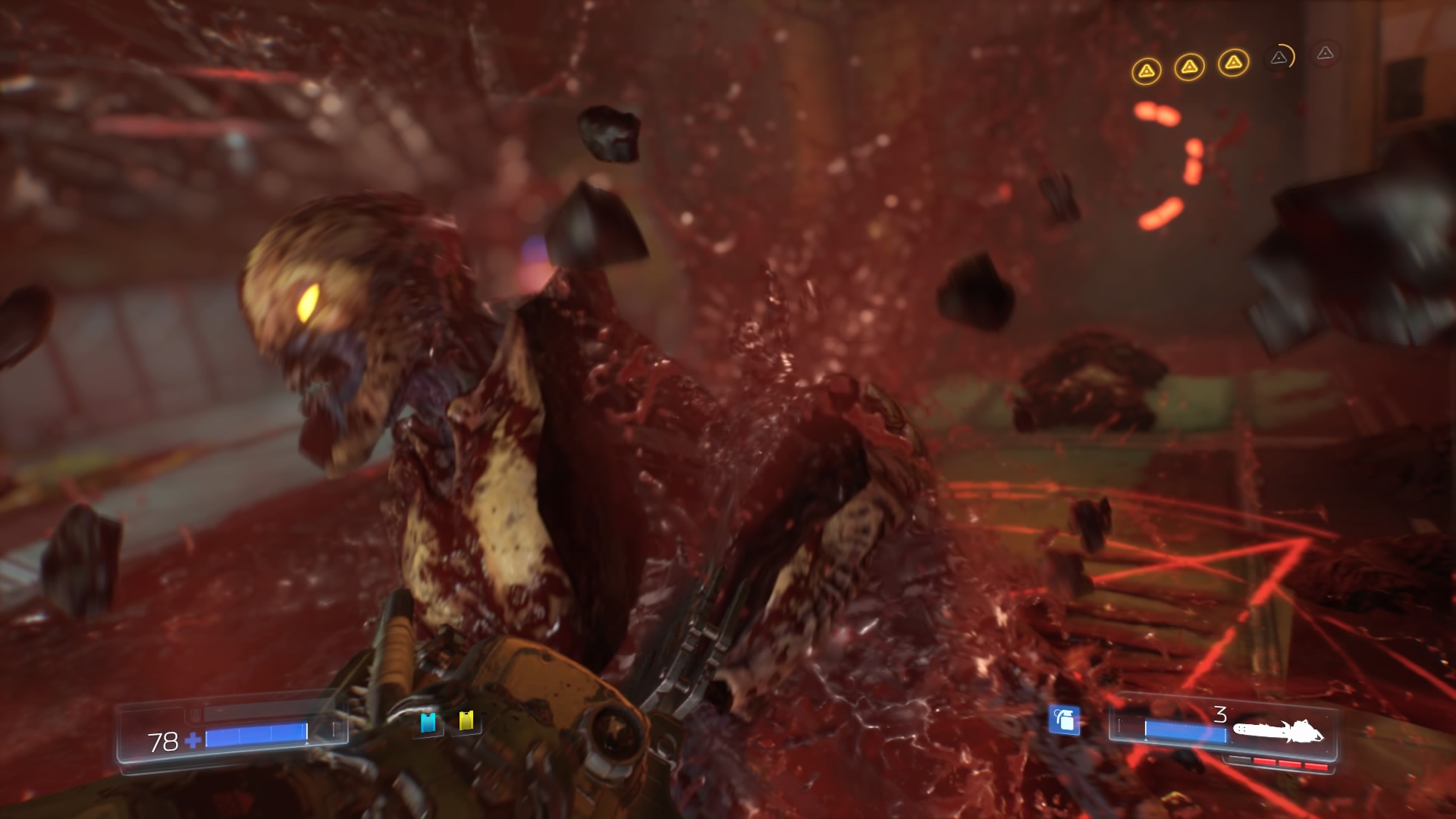 The chainsaw is back, and is a more effective weapon than ever before. The weapon line-up includes a few old favorites. They're mod-able and upgradeable this time around, which makes them feel fresh and new. The original 'DOOM' had one of the best shotguns in video game history, and this 'DOOM' has a similar weapon that’s the go-to solution for average carnage and destruction. Levels are mazes once more: finding all secrets may take some time, but even the original 'DOOM' still wields surprises after all those years. I have never found every secret nook or cranny. The main character is still the same no-nonsense 'DOOM'-guy. Not much of a talker. A silent, grumpy, sober ass kicker.

Multiplayer is quite lifeless, but the developers have seen fit to include a few extra modes and a lot of upgrades via a leveling system. Yeah, 'Unreal,' 'Quake Tournament' and the like are all classics, but 'DOOM' shines as a single player experience in my opinion. 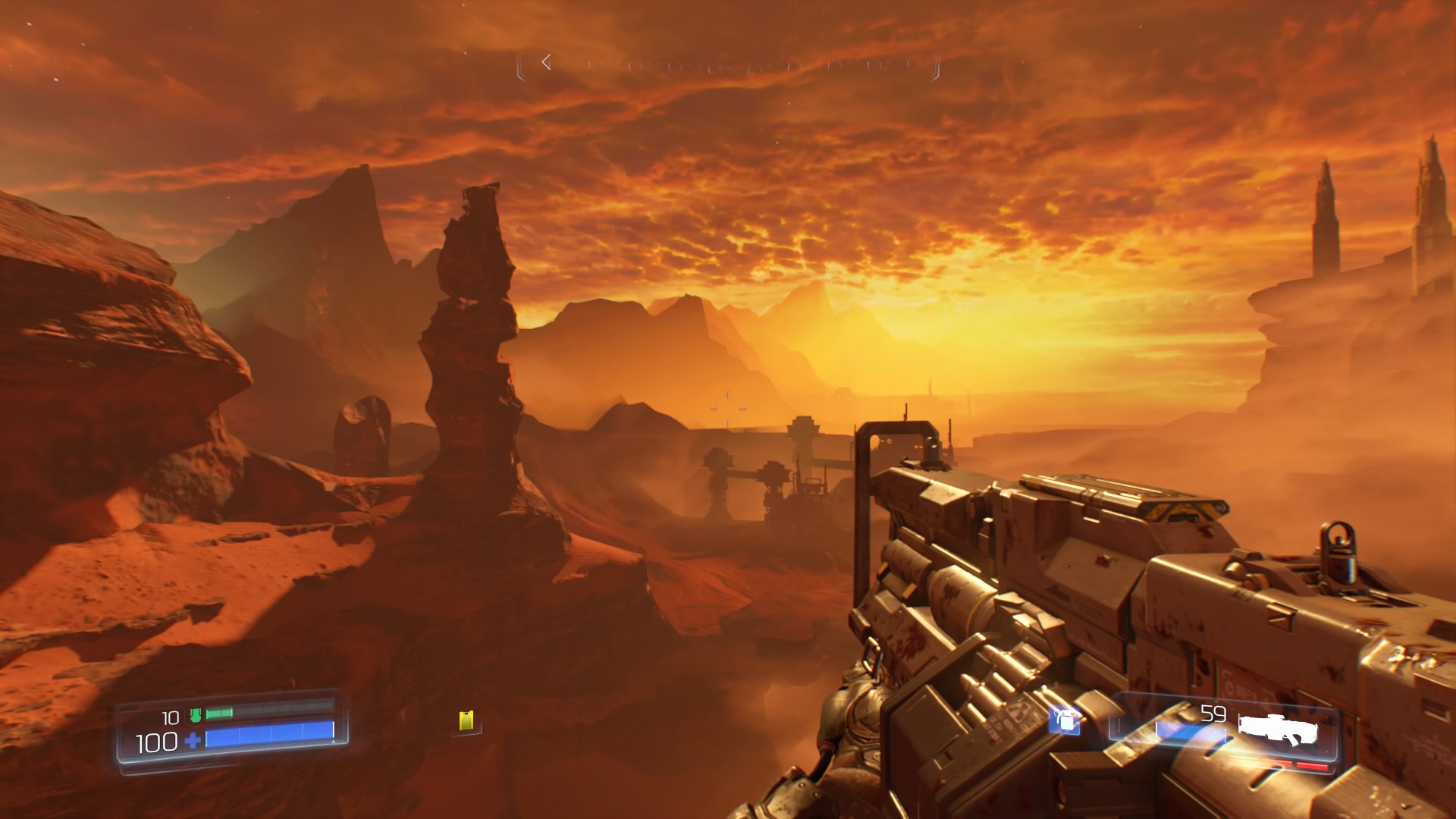 Lest I forget, there's the new Snapmap option. It’s basically a 'Super Mario Maker' for 'DOOM' fans: even though it’s still a very new game, a lot of gamers have taken up the glove and started creating their own content. Classic 'DOOM' maps are already available, which drives home the point: yes, you’re still playing 'DOOM,' 23 years down the line, but with updated graphics and controls. Making maps is intuitive and easy, and makes for a great added value. Snapmap lengthens the life of this new 'DOOM' title and gives the poor, unfortunate gamer with a plundered wallet at least a lot of bang for his or her buck.

Negatives? Before starting up, 'End user license agreement,' 'terms of service,' 'privacy policy,' and 'code of conduct' have to be confirmed. Eh, what? Am I signing up for a social network or am I about to play a videogame? Loading times between levels are annoying. Bring back the days of the cartridge any day now, please. Some baddies are uninspired: exo-skeleton-esque Terminator/General Grievous designs. And most importantly: it's not a "fun" game. That’s a very subjective opinion, I know, but all reviews are subjective. It’s just me and my inner nerd speaking. Whereas 'GoldenEye' (still my favourite first-person shooter) offered the option to shoot an unsuspecting guard in the behind, 'DOOM' is mostly dark and grim. Why so serious, id Software? 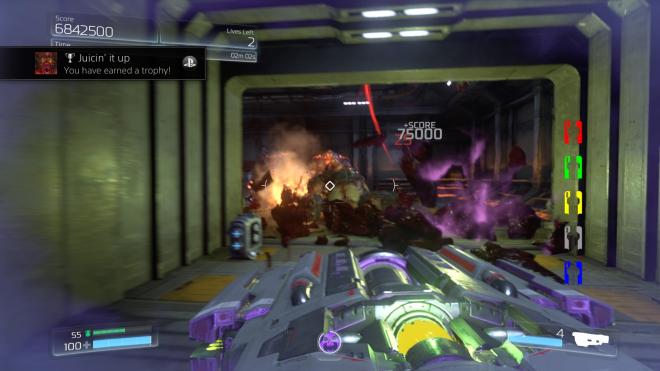 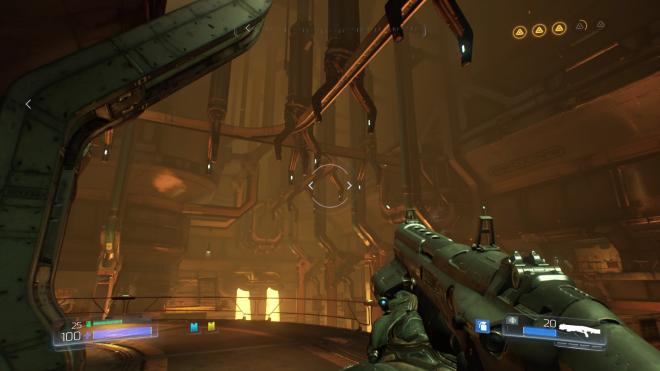 Hard rock music during the intro, dubstep industrial during the gameplay. A prominent soundtrack that’s a little more up-to-date and contemporary. Is that a good thing? I’m not big on this decision. A symphonic score could improve the overall experience. Sound effects are perfunctory, but never explicitly awesome or memorable.

No New Game Plus to play-through again with all acquired and upgraded weapons - but you do keep everything you have if you play through a level again with 'Level Select'. A missed opportunity. 'DOOM' diehards will get a kick out of trying (and beating) the higher difficulty modes. Enter at your own risk. 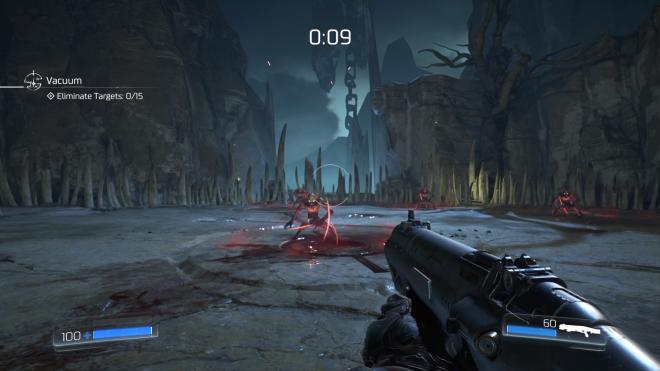 If you like a more-than-decent shooter and lots of blood splatters on your television screen, 'DOOM' remains a force to be reckoned with. I just wish the game was a little more fun to play. But be free to ignore my non-populist opinion, and buy this game. Regret your purchase, you won’t.