The Game Itself
4 Stars
The Video: Sizing Up the Picture
3.5 Stars
The Audio: Rating the Sound
2 Stars
Replay Factor
4.5 Stars
Bottom Line
Recommended

The 'Dungelot' series is developed by a two-person Russian studio called Red Winter. 'Dungelot: Shattered Lands' is the first desktop release in the franchise and has been produced with the help of publisher tinyBuild. The previous mobile-only series features roguelike elements, RPG elements, and, interestingly enough, certain gameplay mechanics that call back to the Windows classic, 'Minesweeper.'

The roguelike genre is a kind of symbiotic creature. It can bind with seemingly any other genre and, if implemented successfully, can greatly enhance both the difficulty and replay value. In the case of 'Dungelot' it has been paired with 'Minesweeper' of all things. 'Dungelot: Shattered Lands' is a turn-based dungeon crawler where every level is a grid of hidden tiles. Clicking on a tile reveals its contents, which could be a monster, a power-up, a magical spell, permanent ability, or the key to the next floor. Enemies block adjacent tiles and can synergize with each other when uncovered, so the order that they are clicked on makes a difference. The dungeons add more floors as the campaign goes on and the enemies become successively more difficult.

At first I played 'Shattered Lands' like it was 'Minesweeper'. That is to say, very badly. I clicked on tiles with reckless abandon and swung at every enemy I encountered. This is a strategy that can pay off if proper preparations are made, but can also lead to rapid defeat. Monsters are everywhere and defeating them is usually accompanied by a punishment of its own, like a reduction in hero morale or sapping of spell power. Clearing an entire floor awarded me with a gold bonus, which can be quite hefty on later floors in a dungeon, but also requires a lot of resources. I adjusted my tactics to become more cautious when necessary, conserving health and armor for later floors so I could afford to try for the big payoffs. As is common with the genre, it’s possible to gamble with items, health and other assets, so I could turn a surplus into usable commodities. The backpack is small but all items can be salvaged for critical bonuses, and items are so common that it’s ok to be very generous with their use. 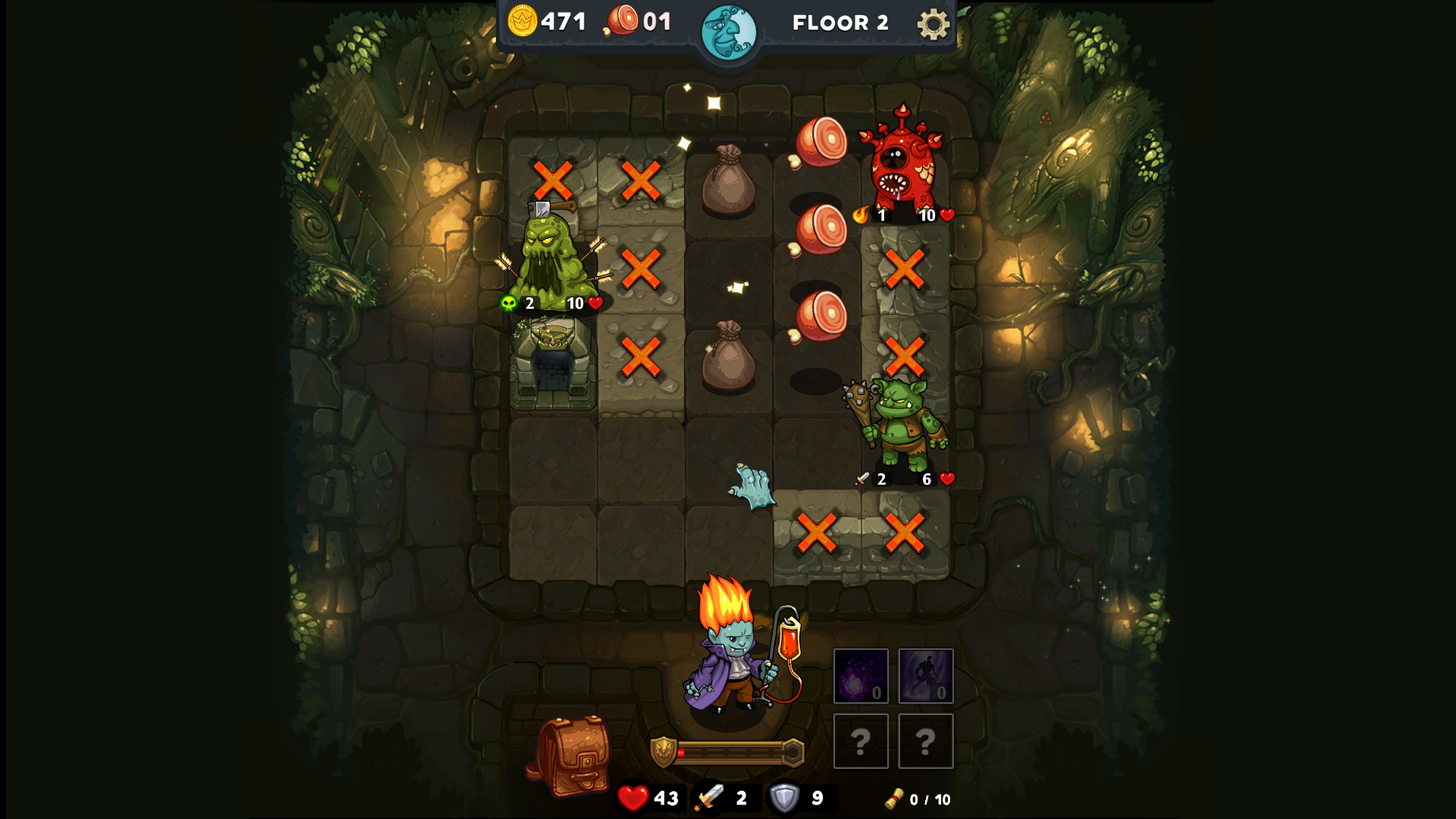 Dying in 'Dungelot' isn’t the end of the world. Actually, the only thing that’s lost is progress in the current dungeon - no stat losses, permadeath, or anything like that. Since entering a dungeon is free, I could spam attempts until I had accumulated enough money to buy a nice upgrade that would make my next attempt just a little bit easier. The levels are procedurally generated, but they tend to lack diversity throughout each act, becoming predictable and a bit grindy, even for a roguelike where grinding is typically a good thing (or at least tolerated). However, there are fun little mini-games and special floors containing no tiles. In these places I could take a breather and sort out my hero’s gear before delving once again. 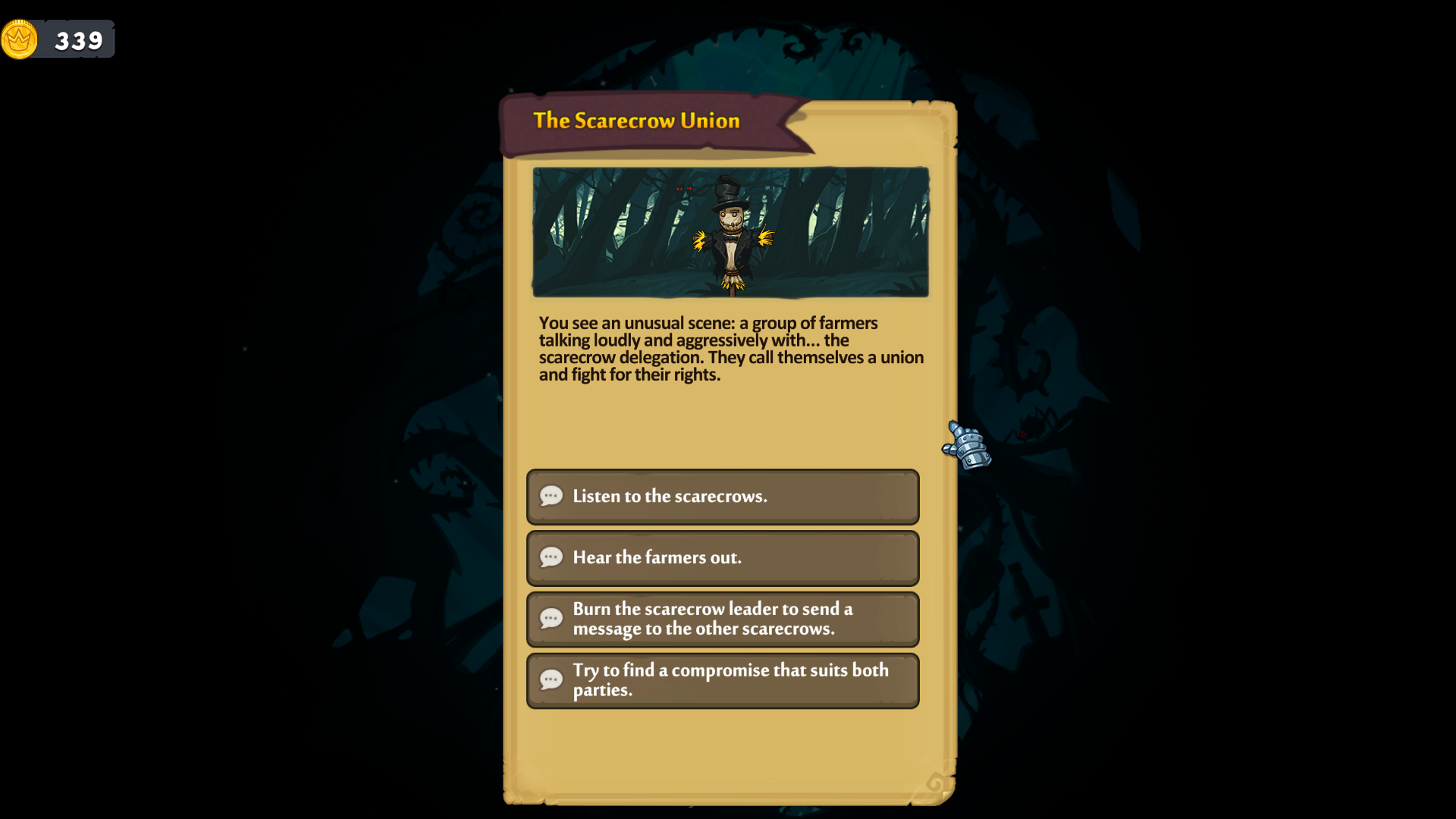 In between dungeons there were other ways for me to spend my hard-earned gold. Some of these were temporary, like buffs from a fickle deity, and some are permanent. Halfway through Act I a mansion opens up, owned by a self-proclaimed vegetarian vampire who is also a playable hero. The mansion contains many fine artifacts that apply to all heroes and all dungeons, and purchasing these made my life much easier. Almost too easy, actually, at least for a time. The mansion is a bit of a balance problem, because just a couple of these upgrades can change the game from very difficult to not very difficult at all. Then when a new act begins, the pendulum swings in the other direction, and completing only a couple of floors can lead to death. The gameplay manages to resist these issues, however, and it was capable of bringing out that "just one more dungeon" sentiment in me. 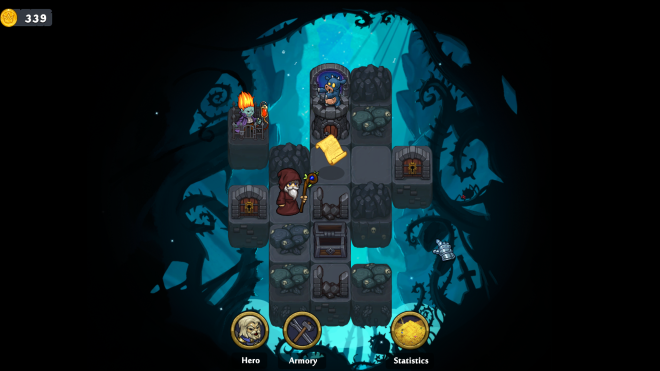 'Dungelot: Shattered Lands' looks like a mobile title, which is to be expected given its heritage. This isn’t necessarily a bad thing. Models are bright and cartoonish, even the monsters, and all of the effects and textures have a cheerful appearance. The game is heavy on clicking and perhaps not fully optimized for a mouse and keyboard, as I frequently scrolled through several menus in a row to conduct a single action. There are no keybinds or much in the way of settings at all. 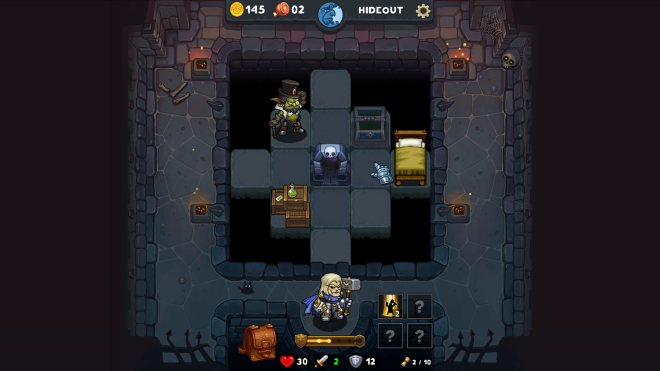 The audio is one of the weaker parts of the game. The music and effects are forgettable fantasy fare, with little to distinguish them from many similar games that have come before it.

New enemy types, heroes, and items are slowly meted out over the course of the campaign. The balance issues can be frustrating at times, but eventually the gameplay corrects itself and produces a happy medium of challenging. The individual dungeons cannot be retried after they are defeated by each hero, but there is a selection of infinite dungeons that offer a high level of replayability and permanent upgrades. 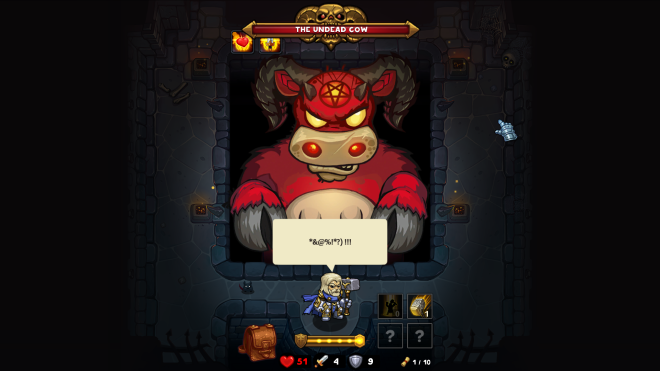 With 'Dungelot: Shattered Lands,' Red Winter has managed to successfully marry strategic elements with a very simple framework, perfect for gaming in small pieces or long benders. They captured the magic from their first 'Dungelot' while avoiding the freemium pitfalls of the second, and 'Shattered Lands' comes out all the better for it. Some modest polishing issues fail to spoil its charm.