Digital Xbox One version reviewed. The digital version can be purchased here.

It’s been two years since PopCap brought us the first 'Plants vs. Zombies: Garden Warfare'. It was an unlikely multiplayer shooter based on their popular tower defense game that nonetheless proved to be a success. Little potatoes, cacti, and oranges run around fighting silly, heavily armed zombies, with recognizable multiplayer shooter mechanics and gametypes. It has been announced for eighth-gen consoles and Windows.

The first 'PvZ: GW' preserved the zany spirit of the original 2D tower defense and infused it with capture the flag, king of the hill, and lots of other things that ship with just about every multiplayer shooter. But far from being just another clone, it brought its own formula to the table, like the wonderful Garden Ops tower defense/horde mode. Some tropes of the genre were converted, such as the MOBA-like class abilities, while others were subverted or abandoned in favor of fast-paced action. 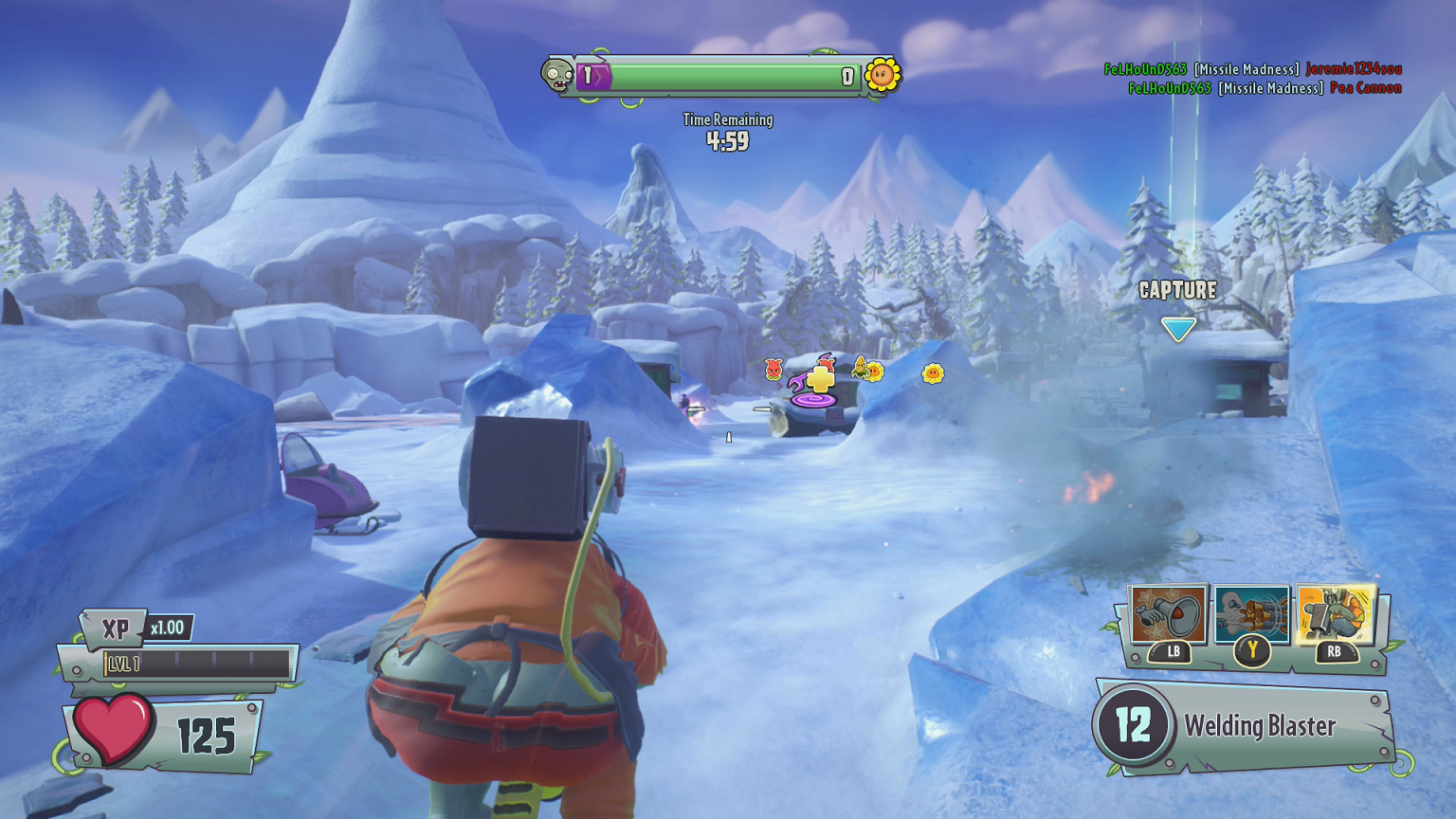 'PvZ: GW 2' is a lot like the original. It’s so much like it that almost all of the character progress can be carried over for each plant and zombie character, so longtime players can still enjoy their awesome Peashooter variants without having to grind for coins and stickers. All of the great gametypes have also made the jump, although some are better than others (gnomes, I’m looking at you). Arguably the best part of the game, Garden Ops, has been expanded with new maps, objectives, enemies, and for the zombie enthusiasts, their own horde mode called Graveyard Ops. The maps are big and vertical, but more importantly have been optimized for ease of movement. There aren’t quite as many things to get stuck on now, or awkward hills that pose an issue for chompers. The only map I didn’t particularly care for was Time Park, a time travel-themed amusement park that has a lot of teleportation and makes it more difficult to apply teamwork.

The workmanlike menu of the first game has been replaced with the much more interactive Backyard. It is a hub of options and customization, and the best part is that it’s also a privately instanced battlefield. In the aptly named Backyard Battleground, I took the plant or zombie character of my choice into the embattled no man’s land in between the two suburban camps. There I would duke it out with an AI army, assisted by AI teammates, meatbag teammates, and towers of my own production. It is basically an endless mode and a way to enjoy light shooting action without the commitment of matchmaking. It also offers single-player, although the lack of diversity in maps, enemies, and tangible rewards limits its appeal. It’s great for wasting time while waiting for friends, or putting a character over the edge for their next level. The zombies have their own backyard too, of course. The backyards can be customized to some degree, such as statues that are paid for with stars earned by completing daily quests.

Multiplayer has been given a shot in the arm in the form of Turf Takeover, a set of gametypes that offer more than the traditional deathmatch. Herbal Assault is a 12v12 arrangement with an expanding map in a modified king of the hill ruleset. Gardens and Graveyards, the 'Battlefield' parody with changing objectives to fight over, makes a return. My favorite is still Suburbination, the multi king of the hill variant where action happens in expected spots and I don’t have to look very long for a big, pitched fight.

While there are a lot of new things to enjoy, there’s really nothing among them that’s going to convert players who didn’t enjoy the first game. This is for the returning fans. PopCap has been listening to criticism of the first game as well as other multiplayer games in the interim. There is a dedication to the single-player aspect, the lack of which is a common refrain amongst fans for pretty much any shooter these days. Almost all content can be experienced solo, and a set of quests from Crazy Dave and Dr. Zomboss have some semblance of a short campaign, but it’s still rather anemic. Garden Ops and multiplayer are still the bread and butter of 'Plants Vs. Zombies: Garden Warfare'. 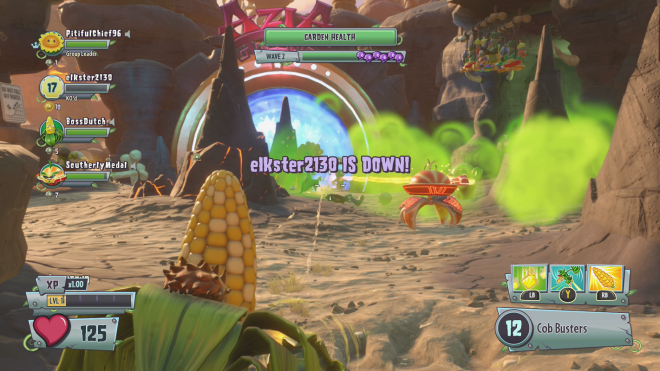 'PvZ: GW 2' continues with EA’s Frostbite engine, which is sturdy, but little has changed. Effects and textures remain at a high quality, and the new character models, like Citron and the plant bosses, are very distinct from their peers. 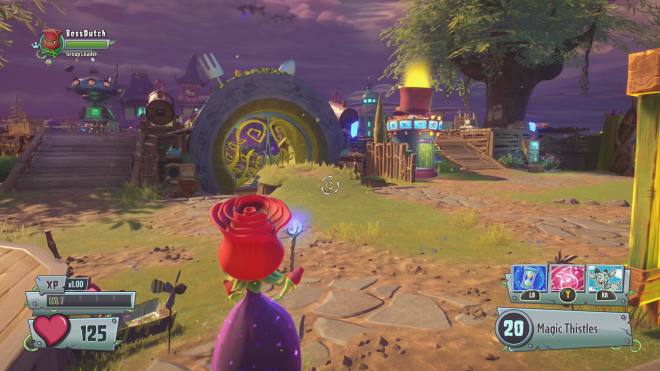 The signature 'Plants Vs. Zombies' faux-creepy retro soundtrack is still pleasing to the ear, and this title has added lots of new tracks that make the off-kilter shooting gameplay even wackier. I suppose in my childhood I never dreamed of blasting away at zombies with a remote-controlled onion drone while listening to cartoonish 50s doo-wop, but it’s finally happened. The sound has some bugs and is prone to acting up during post-game cutscenes and the like.

'PvZ: GW 2’s' many play modes offer a lot of value, even for the high price point. I also enjoy just playing around in the backyard, looking over my meager statistics, shooting a few pesky zombies in the battleground, and thoughtfully considering my sticker purchases. The single-player stuff isn’t really worth much in its current form. 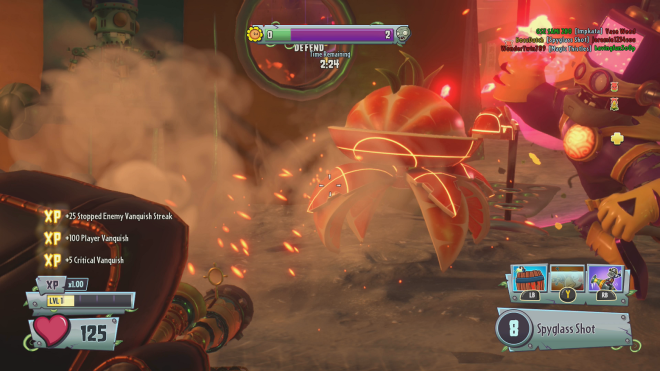 'Plants vs. Zombies: Garden Warfare 2' is less of a sequel and more of a big expansion, but that’s not a bad thing. PopCap has made some big steps forward in cementing the 'Garden Warfare' series as a real contender in the multiplayer arena, if not competitively then at least for sheer enjoyment. 'Garden Warfare 2' is big, fun, and mostly worth the price of admission.