Created by the aptly named SUPERHOT Team, 'SUPERHOT' has been in development for about two and a half years, and was funded through Kickstarter. Desktop editions are currently available and an Xbox One version is expected very soon.

'SUPERHOT' is billed as a shooter, but it’s the kind of game that turns genre conventions on their head. It uses the oft-copied bullet time mechanic as its cornerstone, but in a novel way. Slo-mo is essentially unlimited, as time only moves when the player is moving (well it technically still moves, but at a snail’s pace). A single strike from an enemy ends the level, and ammunition is in such short supply that guns are simply tossed instead of reloaded. So instead of slowly whittling down enemies from behind cover, the player is encouraged to be aggressive and move liberally around each level, dispatching enemies in rapid succession and dodging bullets like in a John Woo film. Weapons can be stolen from enemies with a punch, and that weapon can be fired a few times before it must be abandoned. This is not the only way to dispatch enemies - they can also be beaten to death with fists or thrown objects, and sometimes there are ninja swords. 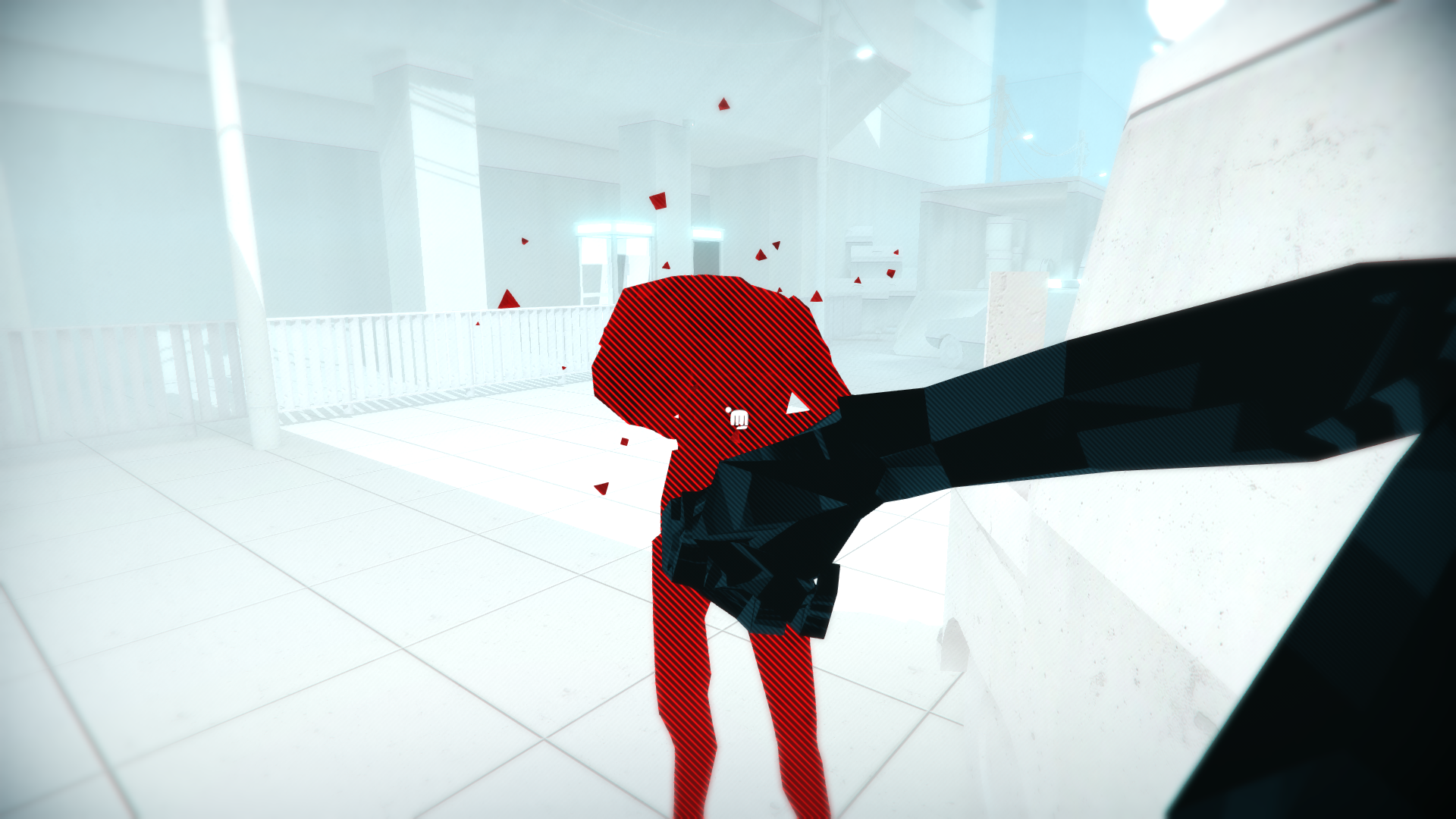 At first I half expected that the mechanics, while inventive, would end up as just a really cool tech demo, perhaps showcasing new advances in slo-mo or physics. In fact, they stand up very well on their own, so much so that I became frustrated with the creepy, Big Brother style narrative that encases the game. Messages flashed across the screen frequently, telling me that I’m a dog, that "they" are in control, and other Orwellian nonsense. I didn’t mind the bullying so much as as the long delays that would come between the levels. The story, which is about a couple of hackers describing 'SUPERHOT' to one another via text while breaking the fourth wall, and maybe trying to crack into a secure data center, isn’t helping the game any. Some of the interludes are weird, non sequitur minigames that just made me stare blankly at the screen, tapping the mouse in the hopes that more red crystal guys would pour out of the walls.

After about an hour of playing, I felt as though I had gone into some kind of trance. 'SUPERHOT' has a way of pulling me in with the kind of personal, visceral action that only comes along every so often. It was designed to be something elemental - it breaks the firefight down into its most basic components: shoot, dodge, repeat. The flow of the game is not unlike the fight scenes in '300', where long slow motion scenes are punctuated by short clips of quick and conclusive violence.

I had a great time experimenting with the slo-mo gameplay and finding inventive ways around each level. Pulling off slick shots from across the map is extremely satisfying, as is punching a guy and then shooting him with his own gun. The precision that is required, in tandem with the tiny levels, makes it an exercise in puzzling or strategy just as much as shooting. The enemies move quickly when time is running and are capable of outrunning the bullets, so it’s necessary to lead them with shots, sometimes through windows, across columns, or other environmental features. Later on in the game it becomes possible to hack into enemies and take control of them permanently, setting up increasingly intricate takedowns. The replays are in real time of course, and make my character look like a total badass as he sprints around the maps, pulls off impossible shots, and judo chops dudes in the face. Levels can be uploaded to SUPERHOT’s free "Killstagram" video service, where instead of hypnotizing myself by shooting red crystal guys, I hypnotized myself by watching other players shoot red crystal guys. 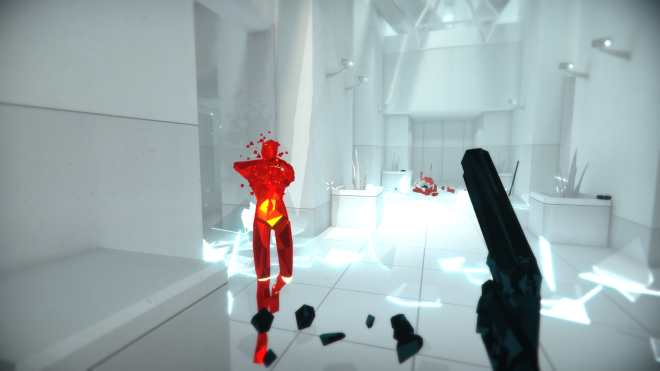 'SUPERHOT' has a minimalistic presentation. All of the character models are faceless crystalline figures - the bad ones are red, and the player character is black. Environments are white and all weapons and throwables are black. Actually, it kind of looks like the opening credits scene of 'Casino Royale', complete with models that crinkle and explode into shards when struck. The physics are excellent and as realistic as a heavily slo-mo shooter will allow. 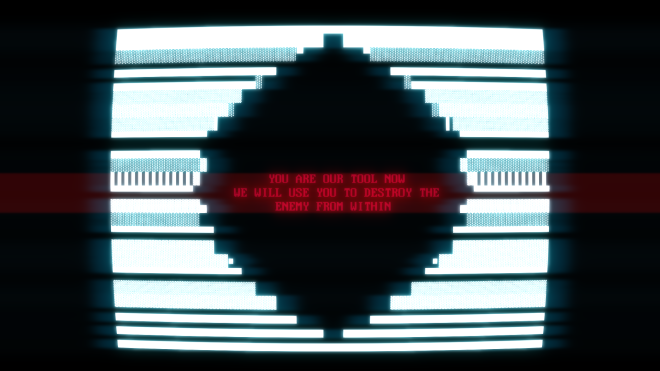 The game is a cacophony of firearm reports, broken glass, and the discordant, digitized static that characterizes the "System", whatever that may be. There is little music or voice acting - like the visuals, the soundscape is spartan, though for a game like 'SUPERHOT', that only adds to the experience.

The campaign is short at 2-3 hours, but afterwards there are several other options, like an endless mode, replayable levels, and challenges. These are the best way to play, as I was mercifully free of the System and all of the silly accoutrements that went along with it, such as the game begging me to find other players and promote 'SUPERHOT'. The Killstagram service is a nice showcase for clips, although in its current state I have no idea how to find my own uploaded replays. 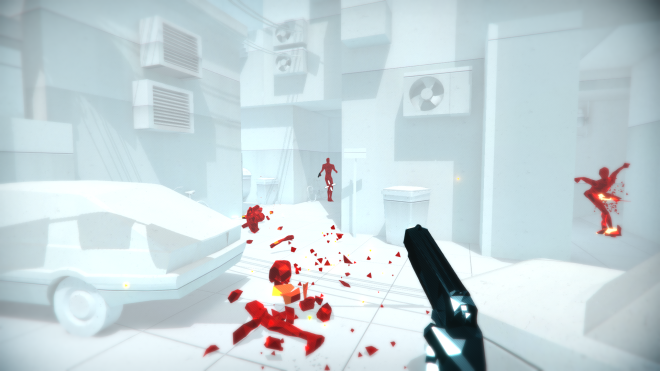 'SUPERHOT' is a very accessible arcade game with highly repeatable shooting shenanigans. I can’t quite decide if the storyline is trying to be edgy or funny, but it doesn’t really work on either level. Thankfully, much of it can be safely ignored in favor of the awesome physics-based gunplay.