Digital PS4 version reviewed. The focus of the review is the single-player content, but story details are kept to a minimum. Likewise, the images used in this review are publisher provided. (Update: In the Video section, there is now a group of captured screenshots. These screens are very spoiler light.)

As the saying goes, father time is undefeated. For the lead character of Naughty Dog's PS3 dynasty, time is at the door. In fact, both Nathan Drake and the 'Uncharted' franchise have been out of action since 'Uncharted 3: Drake's Deception' back in 2011. In the meantime, a little game called 'The Last of Us' made a big mark for Naughty Dog and PlayStation. There's also been a pair of new AAA 'Tomb Raider' titles produced within a reboot framework that clearly had 'Uncharted' in mind.

The intervening years have also seen the world take to a new console from Sony, and before Naughty Dog leaves Drake & co. for good, a new game, 'Uncharted 4: A Thief's End,' will see a proper, all-out production for PS4 from the famed developer.

While it seems crazy that a franchise as popular as 'Uncharted' could really go dormant for the long haul, the beginning of 'Uncharted 4' sees a much more sedate Nathan Drake already in retirement Having settled down and sworn off thievery and archeological plundering, life is slow for our hero. 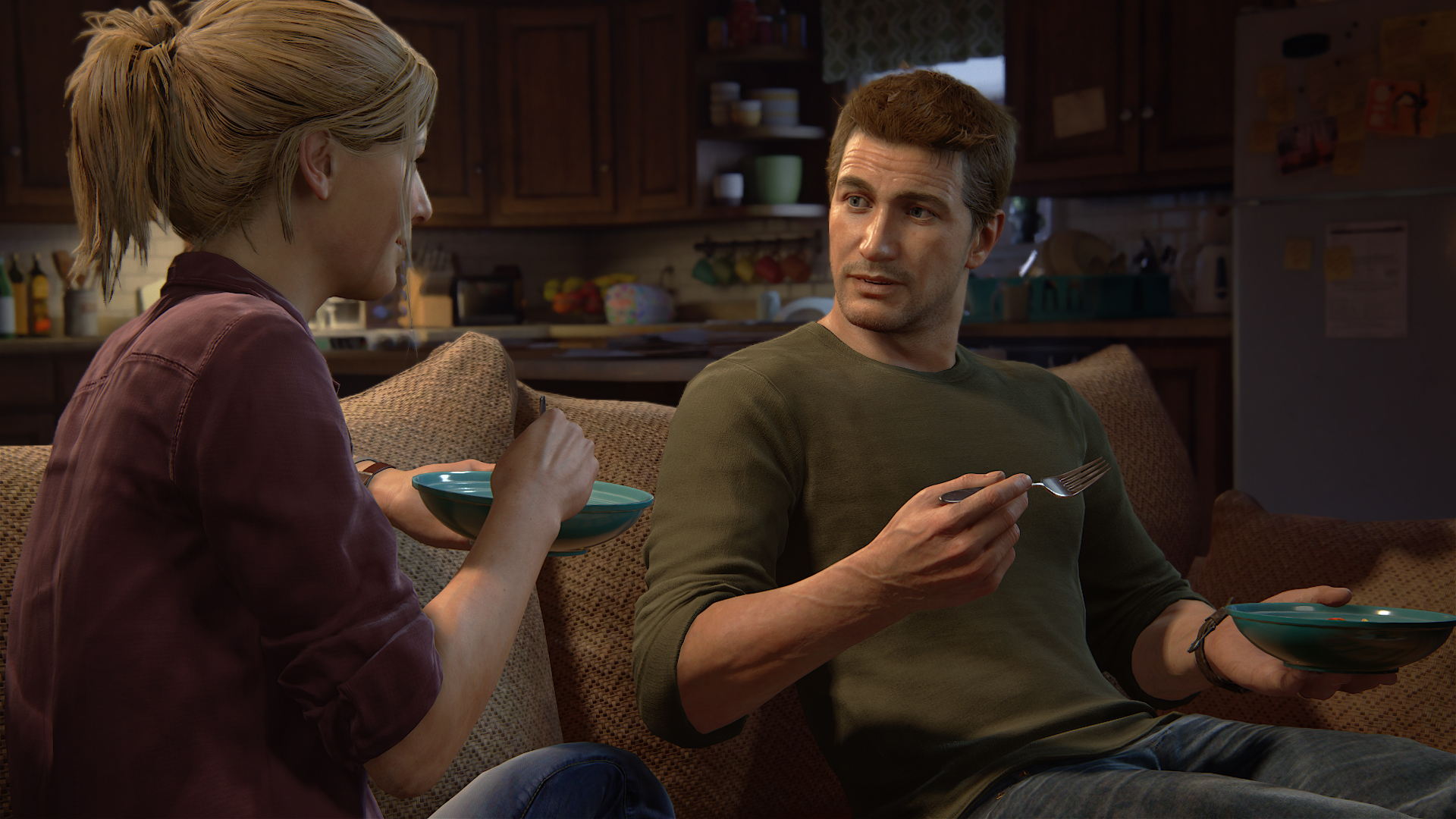 But while adventure and plunder can't get Drake off of the straight and narrow, a big blast from the past does manage to get things rolling. (This was revealed long before the game's release, so I don't think it's a severe spoiler.) Returning from the dead (and never ever discussed) is Nathan's older brother Sam. Sam's back, but he's in a big fix. Enlisting Drake, and by extension, series' favorites like Sully, 'Uncharted 4' is as grand a globe-trotter as they come.

I'm happily not tempted to explain Sam's and Drake's relationship, or anything else out of Sam's past. The game does all of this, and by my measure, does it pretty expertly. I imagine some players will be frustrated by having to play through so much backstory, but I think the payoff is worth it. Once the narrative begins moving forward in the story's present, Sam becomes a great cohort for Drake.

This Drake is less of a hothead and a bit more cautious. He has something to lose, and he has some commitments to try to meet. The way that his shakes down and the ensuing interplay between each of the characters had me grinning. And that's before getting into this fraternal relationship, which powers much of game's moment-to-moment story motivation. The brothers talk mess to each other quite often, and they manage run around with and without Sully in a way that works for me.

I should point out now that while I have, in the past, found the 'Uncharted' series to be marvelous, I've stopped short of really praising the games. It's much the same with 'The Last of Us.' It's always been that I enjoy the story, and I enjoy the gameplay, but the tempo between the two elements has frustrated me. I get impatient to move the story along, or else I get impatient to start shooting, jumping, and puzzle solving. 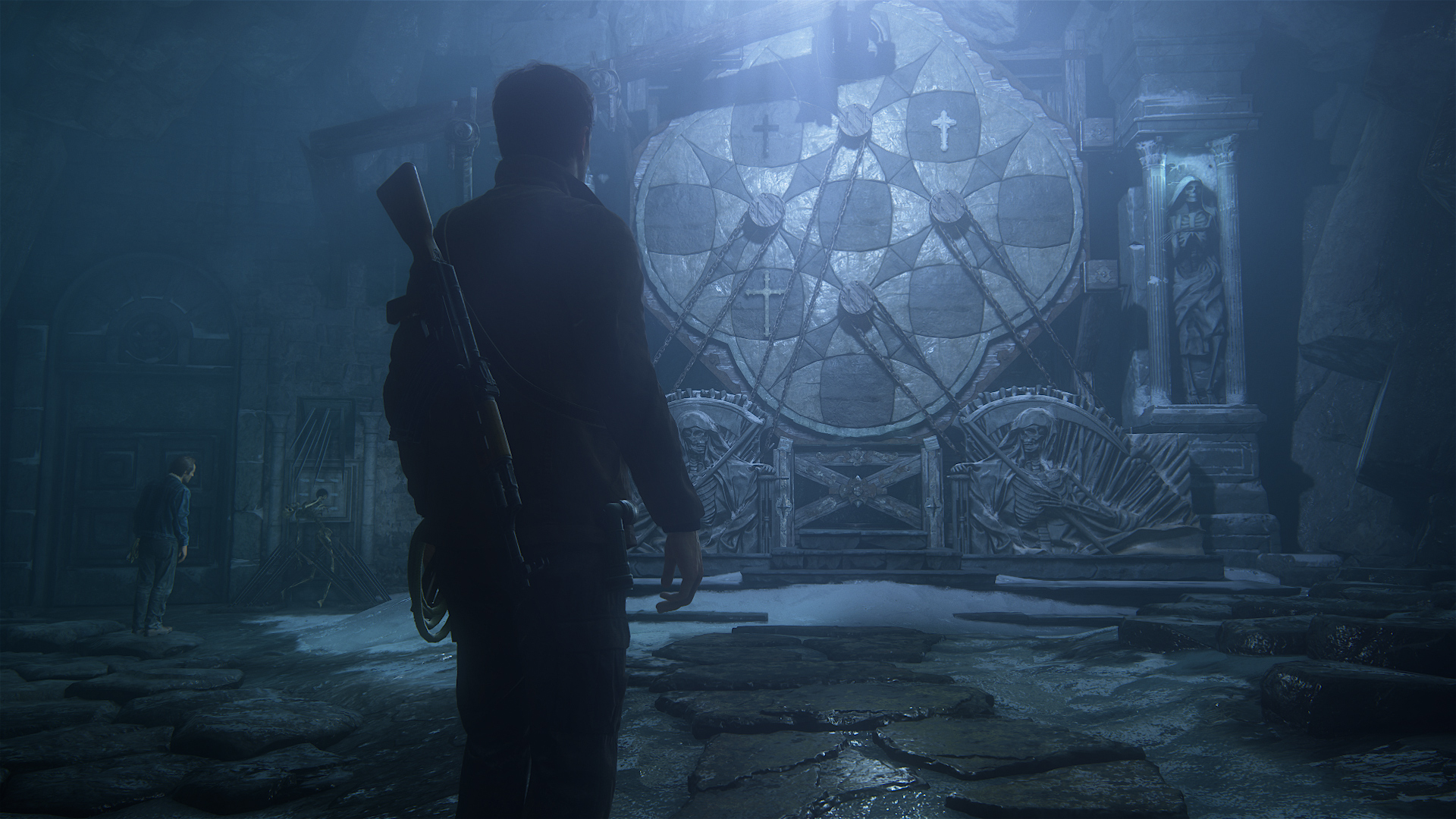 I expected much the same with 'Uncharted 4,' but for the first time in five games, the story vs gameplay struggle has been corrected or a least, it's been seriously adjusted. There are some long cutscenes, and there are some long combat and platforming segments. But there are also the vehicle segment and the stealth sections. More importantly, controlling the character feels more like playing the story than before. No matter how many times I threw myself into an abyss, the plethora of story threads, reinforced through conversations, clues, and quick cuts, kept me invested. This kind of investment in the story and in the characters is something that a game like 'The Order: 1886' wishes it could get from players.

Much of the combat, both on foot and in vehicles, has an element of openness to it. For sure, this is (thankfully) not an openworld game, but most encounters give the player real choice in terms of approach and engagement. The designs are also much better about not having the player fight through the same area multiple times.

The game's stealth system, while not completely dissimilar to 'The Last of Us' reminds me more of something like 'Metal Gear Solid V: The Phantom Pain.' I can go around marking enemies, and then follow those markings and the threat indicators in order to achieve a stealthy passage. Tall grass is particular is good for sneaking, stealth killing, and hiding enemies. It's also good for losing alerted enemies. But as much as I enjoy the stealth, there seems to always be a choke point or two that trip me up. I often get noticed by the last guy in an area, and then have to fight everyone plus their reinforcements. The stealth is generally optional, and in my impatience, I end up going for the butter smooth combat.

Nathan and Sam appear to have perfected a magic rope system (not to mention sliding down a quarry's worth of sharp rocks without issue), and the use of the grapple breaks up the ledge grabbing part of platforming in a welcome way. If not for a strong desire to find hidden collectibles and journal pages, my Drake would have felt sure footed as a mountain goat.

Seeing how polished the levels are, with their intricate paths and hiding places, I'm left wishing that a few more games tried to be this focused. The production quality is extremely difficult to match, but at the same time, there's nothing niche about the game. 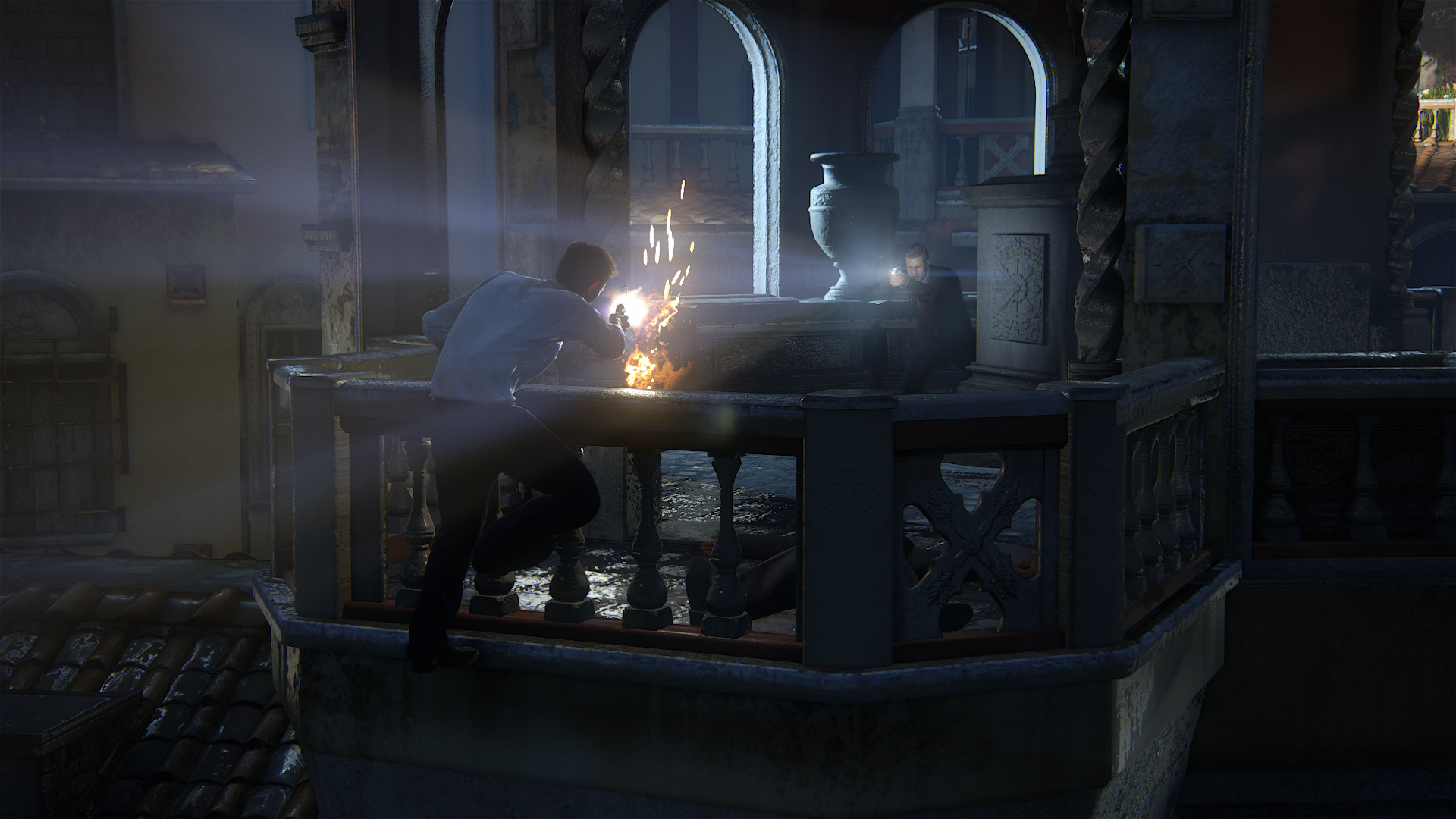 It would be inaccurate to call the game just a cover-based shooter, or to call the campaign, something like playing a movie when so many different gaming elements have been incorporated well and in a natural feeling way. Many players will want to skip right to Hard difficulty, and will certainly not want to go lower than Moderate.

To put it another way. I felt like past Naughty Dog titles have poured on enemies in certain encounters to an annoying degree. With 'Uncharted 4,' I'm thinking that this might be a game to bundle with a PS4 and give to my dad. He's not controller savvy (or really game savvy at all), but I think he might get into the story. The friendly checkpoint system would let him try out shooting, platforming, stealth, driving, and so on. He could work up to the medium difficulty levels, and with a basis imparted by the naturally controlling 'Uncharted 4,' he could try out some less slick games.

'Uncharted 4' then, is like an extremely well-oiled machine. The action is a joy to operate, which for me, came as a surprise. Excelling within an expanded design template is not the same as being revolutionary or even innovative. And yet, this PS4 debut is both a generational high mark and a game which will still be excellent to play for years to come. 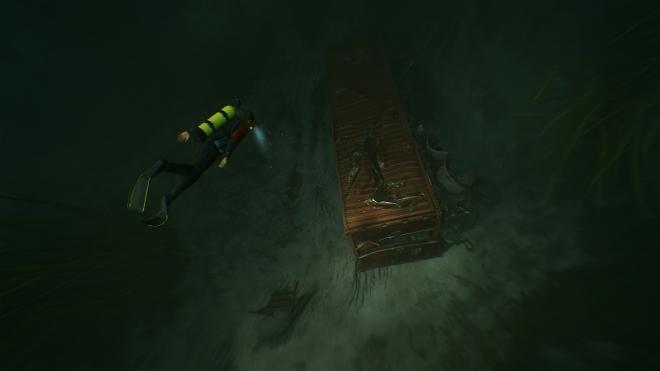 On the PS3, the 'Uncharted' series pushed the quality bar way up in terms of visuals. That was specifically true in the area of animations, but this game really has the full package. There may always be a repetitive texture, light artifact, mip pop, or streaming leak to distract my eye, but it really doesn't take away from the overall visual fidelity in a significant way. Each new biome brings with it new vistas, new flora and fauna, and a happy routing. All named characters are incredibly detailed, and the uncanny valley is kept at bay for most of the time. Basic enemies have a bad habit of looking samey, but they do move well.

I once got a cave to partially unload where I could see out of the world. I also once slid down a zipline into a box, which for some reason caused my 4x4 to be launched on its side. Sully then ran and got into the overturned vehicle while promising to bring it over but there it sat, not going any further.

There were dips in performance but nothing like a slideshow or else sustained low fps. The texture work is some of the best in the biz, and the lighting effects, as further extrapolated by the robust Photo Mode, are enviable. This is must-have demo material for any new TV.

Note: To follow up on the pre-launch review, here are some of my own screenshots. By time of this update, I'm hoping that the extremely top secret/no spoiler feeling of the game have relaxed somewhat. What the screens show in terms of spoilers are really just some of the different biomes featured in the game. 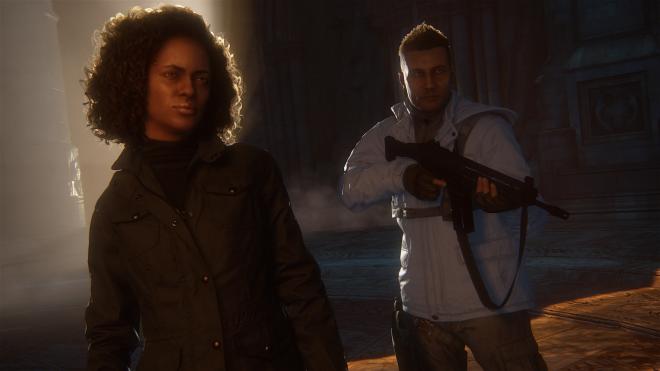 The audio options, right down to tuning surround placement, are appreciated, and being able to play something so sporadically bombastic while still hearing the important ongoing, localized dialog is a treat for a top system. Even so, it is the voice acting which sticks out as being first rate. That leaves the score as less important. Like the score, the sound effects and ambient are high quality but not at all stunning. 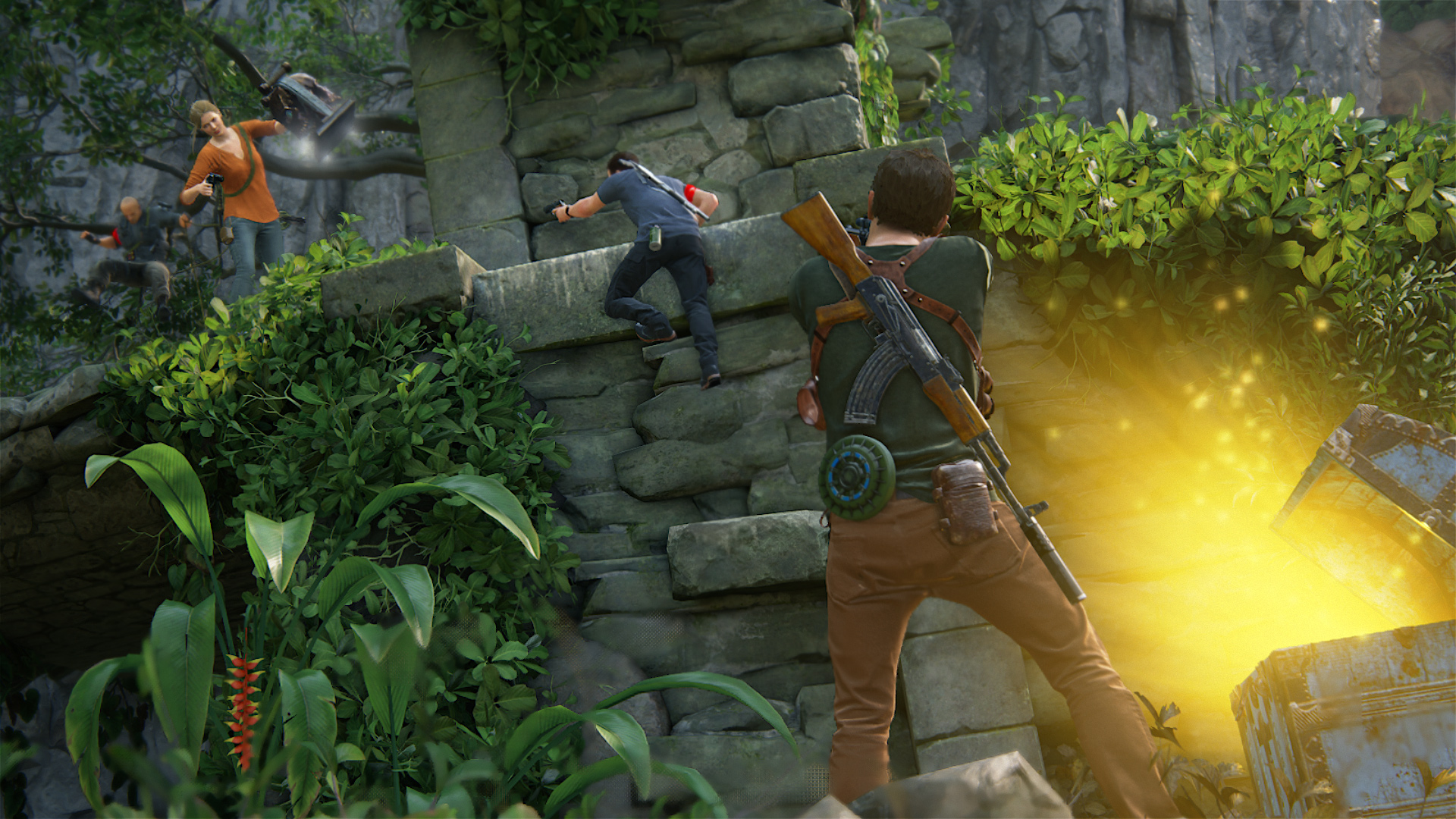 The Photo Mode alone nearly derailed me, but most players will want to get their mileage out of either the special options that become available after beating the game once, pursuing all collectibles, or in the multiplayer. For the franchise as a whole, I consider the multiplayer to be superfluous. This time though, I think the combat was adjusted with the idea that those of us who want more shooting can find it in Encounters or (more likely) in going online.

Leading up to the launch and much has been promised for the longevity of the multiplayer. New maps and modes are free for all, while vanity and gameplay items need to be bought or else unlocked through play. A year of this content has also been promised. It all sounds good on paper, but those buying the game and going straight into multiplayer may be a little frustrated during launch week. 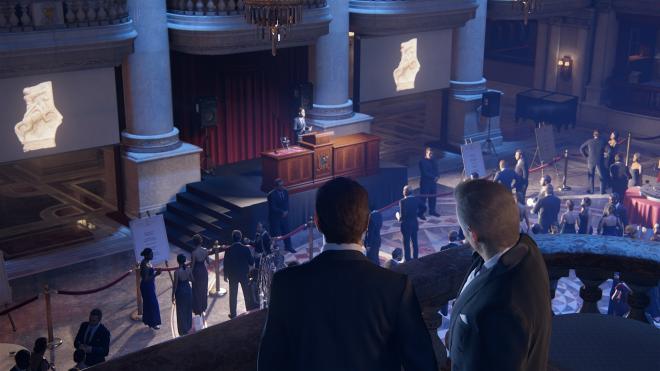 We've had a few years with the PS4 now, and while I've cherished games like 'Until Dawn' and 'Bloodborne,' there has been a void when it came to the question of a must-own exclusive. 'Uncharted 4: A Thief's End' is that game. It's not ahead of its time like its series' forebears, but the elements of story, gameplay, and visuals come together like a masterwork. For me, the final product beats the impressive previews. It's not a revolution, but it is Naughty Dog at the top of their game.