The Game Itself
3.5 Stars
The Video: Sizing Up the Picture
3.5 Stars
The Audio: Rating the Sound
4.5 Stars
Replay Factor
3 Stars
Bottom Line
Recommended

'Lego Star Wars' was the inaugural entry in the now eponymous 'Lego' video game series from Traveller's Tales, which has grown into a massive following with many other licenses in the stable. The first game had humble beginnings on the likes of such machines as the Game Boy Advance, Gamecube, and a gadget that was called simply "Xbox" with no other words or numbers after it. This most recent game is the companion to 'Star Wars: The Force Awakens', and is the fifth 'Lego Star Wars'.

I have been doing 'Lego' reviews for HDD for awhile now, and was modestly familiar with the series before that. If there is one word that describes each iteration in the series it would be "familiar". The games have never dramatically changed from one version to the next, which is reassuring for some people and boring for others. Sure there are small upgrades in each new release, not to mention dramatically improved tech on the whole from 2005, but any given 'Lego' title is a known quantity.

I won't sugarcoat it and say that 'Lego Star Wars: The Force Awakens' is a dramatic departure from its forebears, that it has revolutionary features that amount to fresh gameplay in a 'Lego', much less gaming in general. But I will say that I was surprised more often playing 'The Force Awakens' than I have been with any 'Lego' in a long time. This is a franchise that desperately needs new direction and fresh mechanics. After 'The Force Awakens' it still does, but things are looking up. 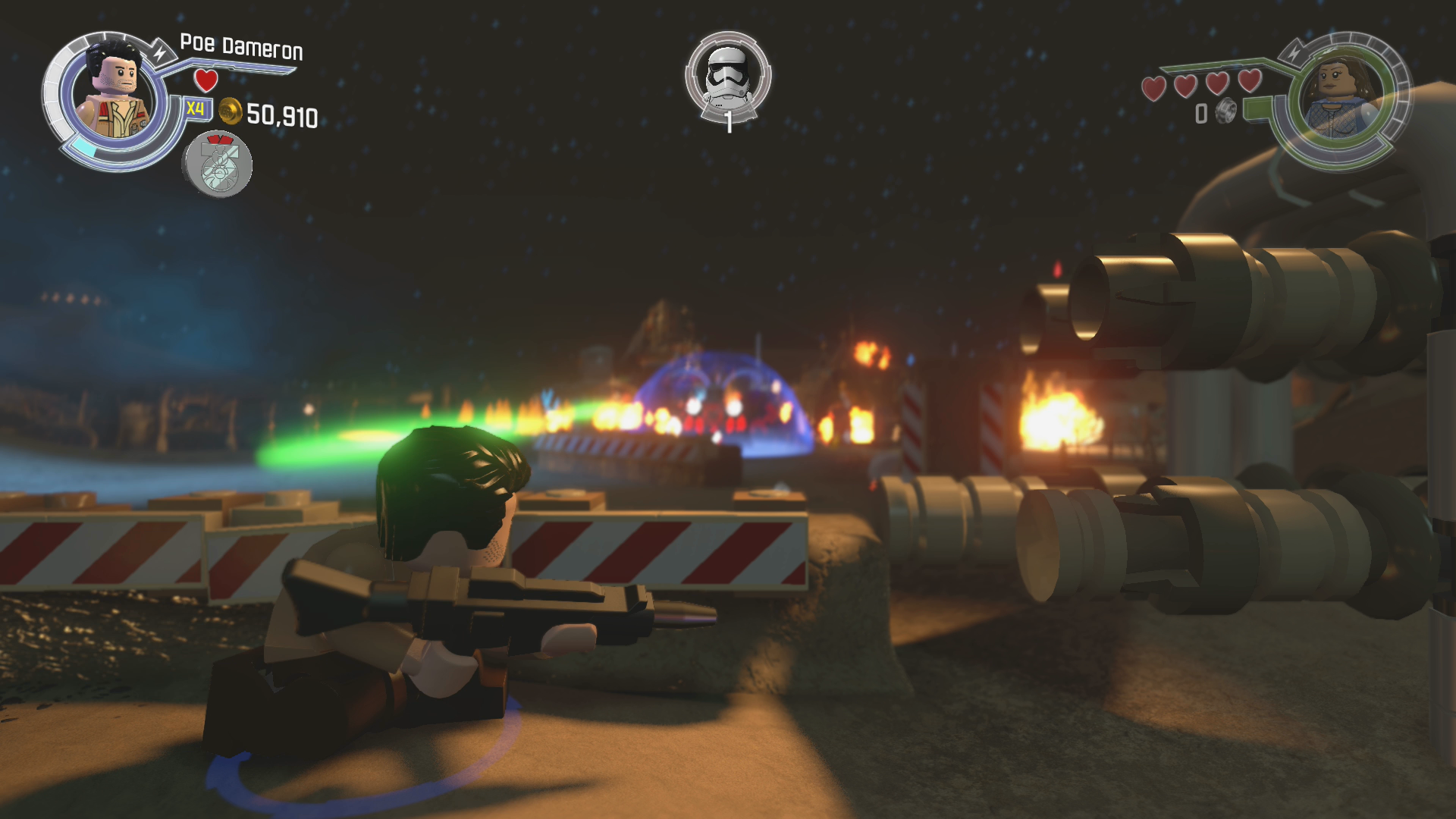 At its heart, this is the same old 'Lego' we know and love. I break things, I collect the studs that they drop, I solve puzzles, play minigames, and so forth. Sometimes I even have fun doing it. The first thing I noticed that was different, that awoke me from the pleasantly drowsy lull of normal 'Lego' gameplay, was the multibuilds. When things need to be built in a 'Lego' game, normally all I do is hold down the B button and presto chango, the item appears fully constructed. Very quick and convenient, but also a lost opportunity because building things with Legos in real life is so fun. Multibuilds add a wrinkle by making the same pile of blocks able to build two or even three different structures. The player chooses which the order in which the blueprints are assembled, and this is important for solving some of the puzzles. On Jakku I had to construct a huge water hydrant to put out a fire, for instance, and I couldn’t proceed forward until I had put the builds in the proper order. Other builds are completely optional but rewarded me with red bricks or other collectibles. Multibuilds are not a huge leap forward, and pale in comparison to actual brick building, but they’re a step in the direction, which is some much needed variety. 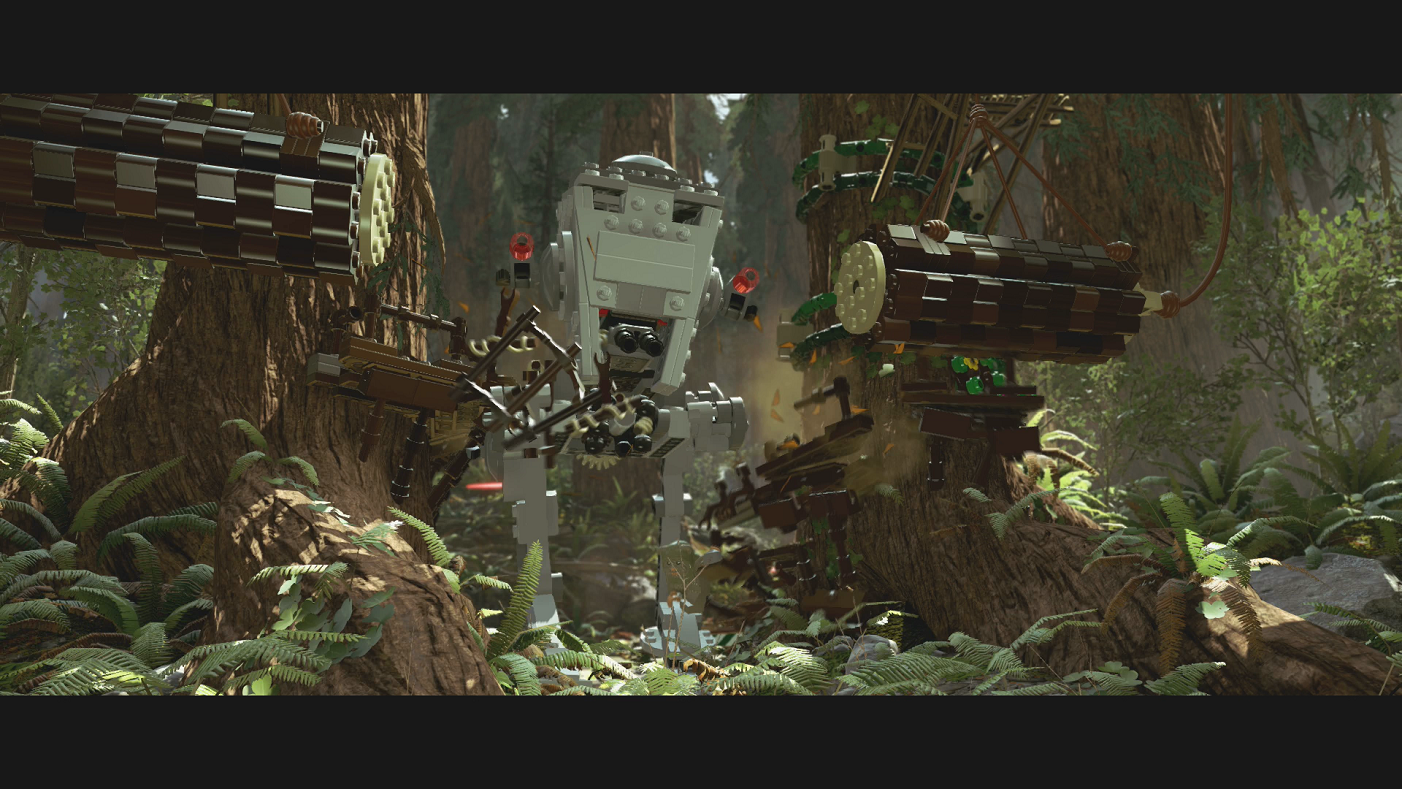 For the more action-oriented fans there are now cover-based shooting and extended dogfighting portions. For the shooting, it works not unlike a 'Gears of War' or other third-person shooter: move behind a conveniently located thing, peek out from behind and shoot at people, repeat. There’s no reloading or anything remotely complicated, but it’s still fun and not what I expected. TT uses them often, but they are short and tend to not overstay their welcome. As for the dogfights, there have been many vehicular battles before in 'Lego Star Wars', but not as fleshed out as this. Some of the early levels stumble, but they get better as the story progresses. 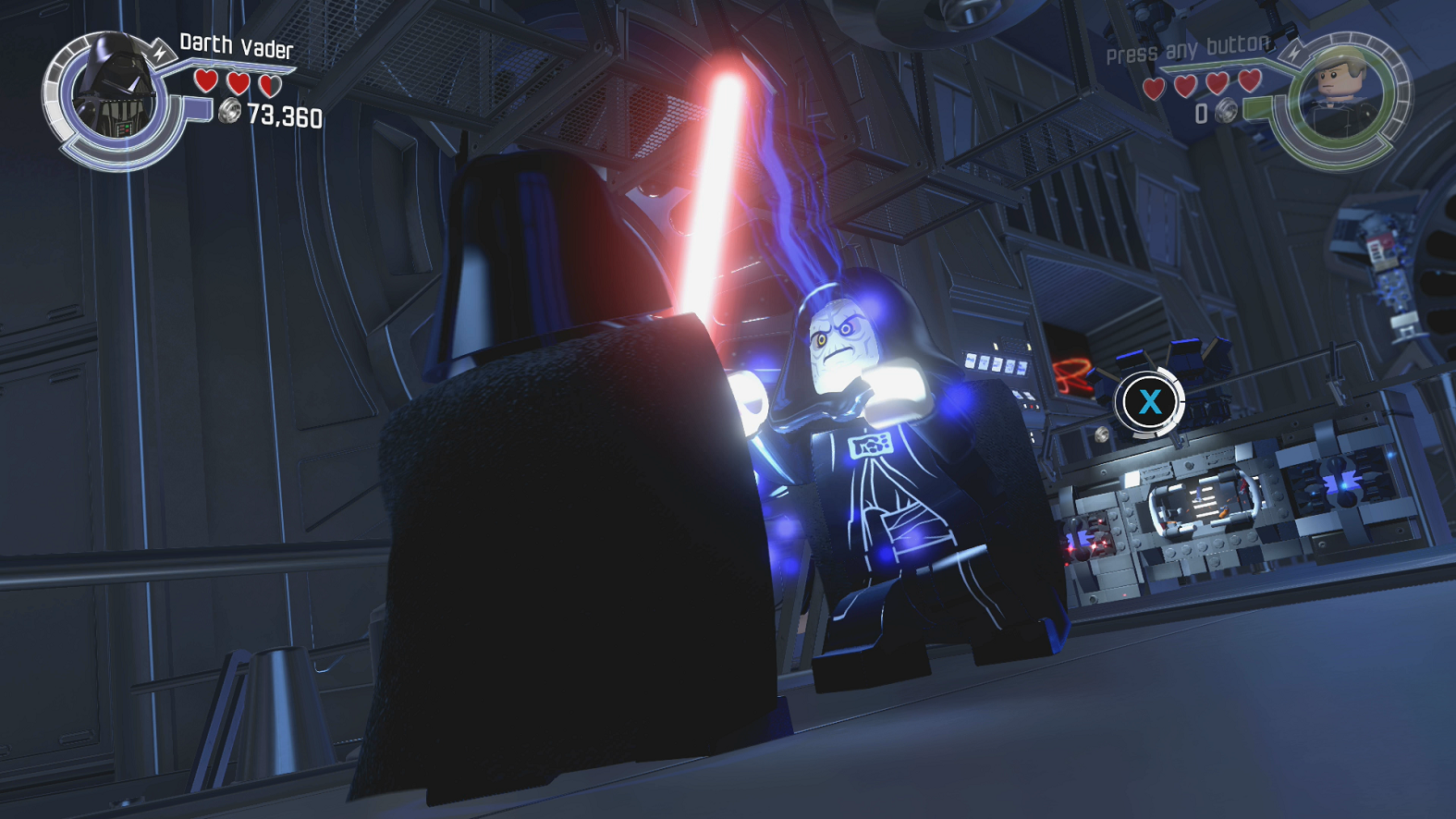 As you might expect from years of Traveller’s, the storyline of 'Force Awakens' has been carefully transferred over into happy cartoon Legoness. Even the darker portions of the storyline are glossed over for the youngest of true fans to enjoy. The gameplay has its ups and downs, but the campaign is always good for a chuckle with the silly jokes and slapstick. There’s also something still satisfying about bashing open every object in sight and collecting a kajillion studs for that True Jedi rating. 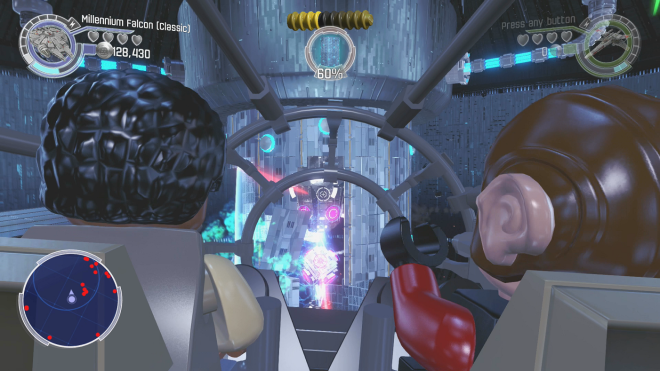 'The Force Awakens' sports a more modern translucent look in its UI, a marked departure from the aged arcade decorations of previous outings. There are also the incremental changes that accompany every successive release, particularly in explosions and other effects. The big spaceship figurines look just how I would imagine the real life toys would be, except perhaps more shiny. Slowdown is not usually a problem, but the bigger maps cause the engine to act up. 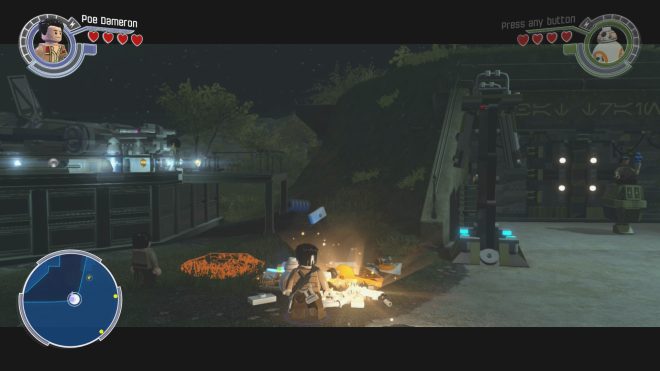 TT’s dedication to immersion is on full display with the production value of the voice acting, which has all been transferred from the film. Some new dialogue has even been recorded for the special levels (see some details below). The sound effects and music are similarly stellar.

There are the usual outlets for replaying levels, like unlocking characters (hordes of them), finding bunches of collectibles, grabbing studs for True Jedi, and exploring levels outside of the story to make use of different characters’ powers. Lucasfilm gave TT the greenlight for special levels that are unlocked with red bricks, each fleshing out the backstory for certain characters, which is where the new dialog is really helpful. The red brick thing is a pain but these are still good fun, especially C-3PO’s. Drop-in splitscreen co-op is available, as usual. 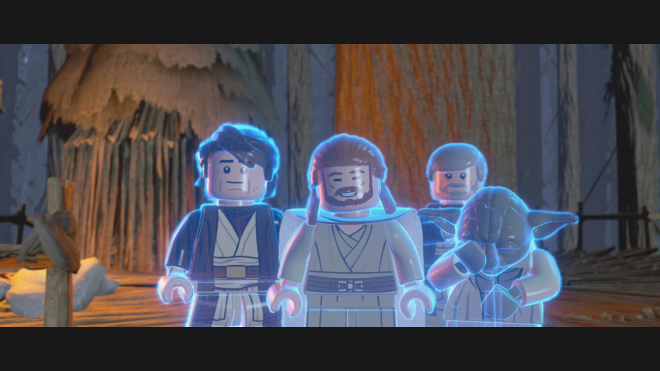 'The Force Awakens' is one of the better 'Lego Star Wars' in recent memory. TT is paying attention to players and throwing in more variety. Even if we’ve seen all of this variety before, it’s very welcome in the 'Lego' world. If you haven’t been a huge fan of the series to date, this might not change your mind, but the returning fans will find a lot of 'Star Wars' to do.