The Game Itself
4 Stars
The Video: Sizing Up the Picture
4 Stars
The Audio: Rating the Sound
4 Stars
Replay Factor
4 Stars
Bottom Line
Worth a Look

Plenty of children know the thrill of throwing a rubber ball at an unsuspecting foe and smacking them right in the face. Indie developer Game Swing looks to bring that excitement to the virtual realm with their first retail title 'Stikbold! A Dodgeball Adventure.' The Copenhagen based developer has teamed up with publisher Curve Digital to bring their eccentric party game to both consoles and PC.

'Stikbold' began life as an entry in the 2013 Nordic Game Jam and later as a PAX 10 selection. Has it managed to fulfill its potential and recapture the magic (and subsequent horror) of dodgeball?

While 'Stikbold' is definitely based off dodgeball, there are some key differences in the rules. Instead of being played on a court, the action now takes place in a circular setting. There are no sides, as it's kill or be killed in this 2-on-2 sport. A single hit won't eliminate a player either, nor will catching a thrown ball, as participants will need to be hit twice in a short span to be defeated. A match finally concludes when one team scores three victories. 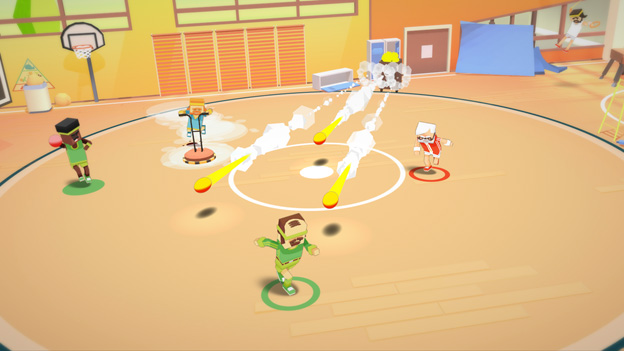 The action in 'Stikbold' is fast-paced, and effective strategies can be played both in close and far away. A lot of the depth comes in the form of the game's roll maneuver that normally acts as a dodge mechanic, but if timed perfectly, will even catch a ball. Players can also curve their throws by twisting the right analog stick after launching a rubber ball. This after-touch system feels great, and makes sure nobody is ever safe, even if they are hiding behind cover.

While 'Stikbold' is clearly designed as a multiplayer game, there's also an excellent campaign that acts as a nice tutorial to get players up to speed. Designed to be played by two players (although a computer can assist those who want to play solo), the story focuses on the adventure of Björn and Jerome, two star athletes who need to rescue fellow Stikbold players from the devil. Yes, you get to play dodgeball with Satan himself.

The great thing about 'Stickbold''s campaign is that it never lets up on the gas pedal. The game starts off being completely ridiculous, and it just gets dumber (in the best of ways) from there. Each level will have players taking on rival players in the forms of hippies, skeletons, and other wacky characters. There is a price to pay for keeping the proverbial amp at 11 the whole time, though, and that's a short length. 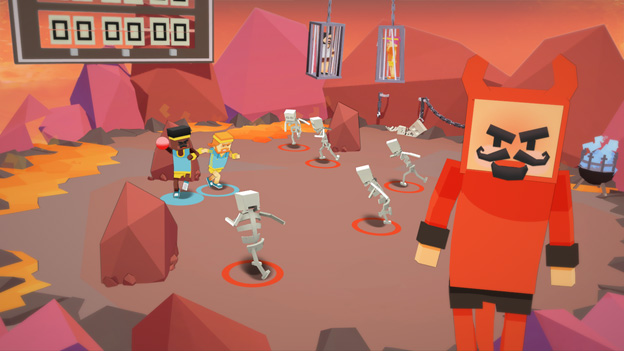 That said, we'd rather see 12 memorable levels than 40 mediocre ones. Every single stage in 'Stikbold' is unique, and there's absolutely no filler to be found here. The best stages are the extremely fun boss encounters. I never thought I would find myself fighting a giant whale with a rubber ball, but I'm sure glad I did. These fights force players to use all of their skills to overcome considerable adversity.

The real draw is the game's 4-player multiplayer, though, and it absolutely delivers. Players can either play on teams or in a frantic free-for-all match, and the action is always intense. Due to 'Stikbold' playing like a twin-stick shooter, anyone should be able to immediately jump into a match and feel competitive. This leads to everyone having fun, no matter their skill level.

Perhaps the best thing that Game Swing has done is making sure eliminated players aren't just bored and waiting for the next round to begin. Like in some 'Bomberman' variants, the eliminated contestants will be able to impact the map. This is actually in the form of stage-specific hazards. For example, on the beach level players can come back as sharks that will swallow players if they come into contact with them

This adds a huge amount of depth to the game since you'll often want a specific player to win determining on the rankings. If someone already has two victories in a match, you'll be sure to see all of the eliminated participants going after them in order to keep their chances alive. It's fun, it's silly, and it's what makes 'Stikbold' really special. 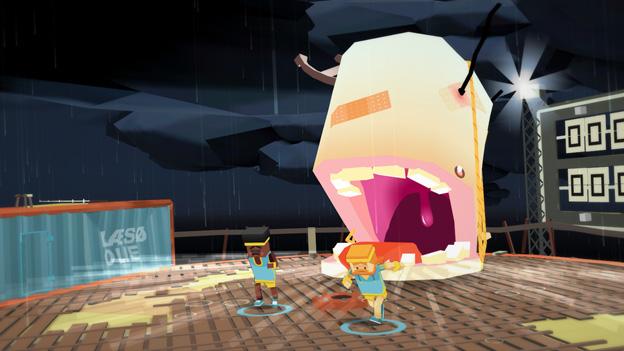 While not a technical marvel, Game Swing has developed a good looking game that is full of style. The blocky characters are reminiscent of 'Minecraft,' and every single stage shows off a different locale. The amount of unique artwork is impressive as each level is filled with interactive objects and hazards to avoid, but sadly there are only 5 stages to check out. 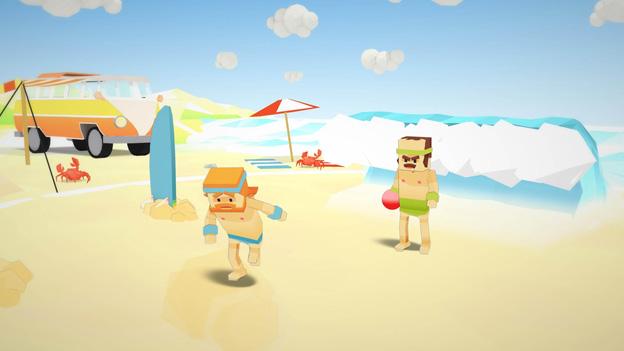 'Stikbold' doesn't have a soundtrack that will leave you humming it for weeks later like 'Undertale,' but it does have a nice array of catchy tunes. The light-hearted music is fitting for the game's atmosphere, and the sound effects provide a satisfying "thump" when someone gets hit with a projectile. The voice acting is also top-notch using a made-up language that combines Danish and English.

While it will only take players an hour or two to play through the campaign, they'll have plenty of reasons to come back to 'Stikbold.' Each of the story's 12 levels has three optional goals to fulfill. These range from simple challenges such as defeating a stage quickly to more complex ones where you'll need to eliminate an enemy in a specific way. There's also three separate difficulty levels, and the multiplayer is fun enough that you'll want to keep coming back for more dodgeball action. 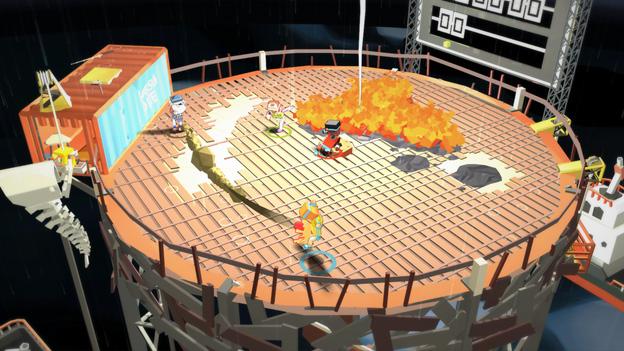 'Stikbold! A Dodgeball Adventure' may not be the cream of the crop when it comes to local multiplayer games, but it's a heck of an alternative. There's enough depth to keep players coming back for more, but not enough content to recommend long play sessions. A completely ridiculous, albeit short, campaign also helps round out an enjoyable package. 'Stikbold' offers up all the fun of dodgeball with the added bonus of not getting smacked in the face with a large rubber ball.