The Game Itself
4 Stars
The Video: Sizing Up the Picture
4 Stars
The Audio: Rating the Sound
4 Stars
Replay Factor
3.5 Stars
Bottom Line
Recommended

Stories: The Path of Destinies

In the realm of Boreas, Reynardo is certainly not the king, but this fox is a bit of a swashbuckler. From Spearhead Games, 'Stories: The Path of Destinies' puts players in control of Reynardo. This control is not limited to the fox's sword-wielding abilities, but rather, the paths and the choices that the rogue takes as he tries to navigate a war between ravens and rebel rabbits.

Right of the bat, the concept of 'Stories: The Path of Destinies' is easy for me to get behind. Where many might see it as a colorful, isometric action RPG, I was struck by the pleasantly familiar 'Choose Your Own Adventure' style choices. Through these choices, which usually come before each chapter, a five chapter story unfolds. This is a story with many possible endings, but with four fundamental truths.

The overall story is quite simple, as it's framed within an empire and rebellion template. But within the cast of major players and maguffins, there is a special book which comes into the hands of the player almost immediately upon starting the game. It's through this book that the player gets 'Groundhog Day'/'Edge of Tomorrow' powers. After my first five chapter playthrough, the fox lay dying ironically, his death the price for learning one of the fundamental truths. The book then turned its pages back, and bam, I went again, armed with special knowledge I had lacked the first time through. 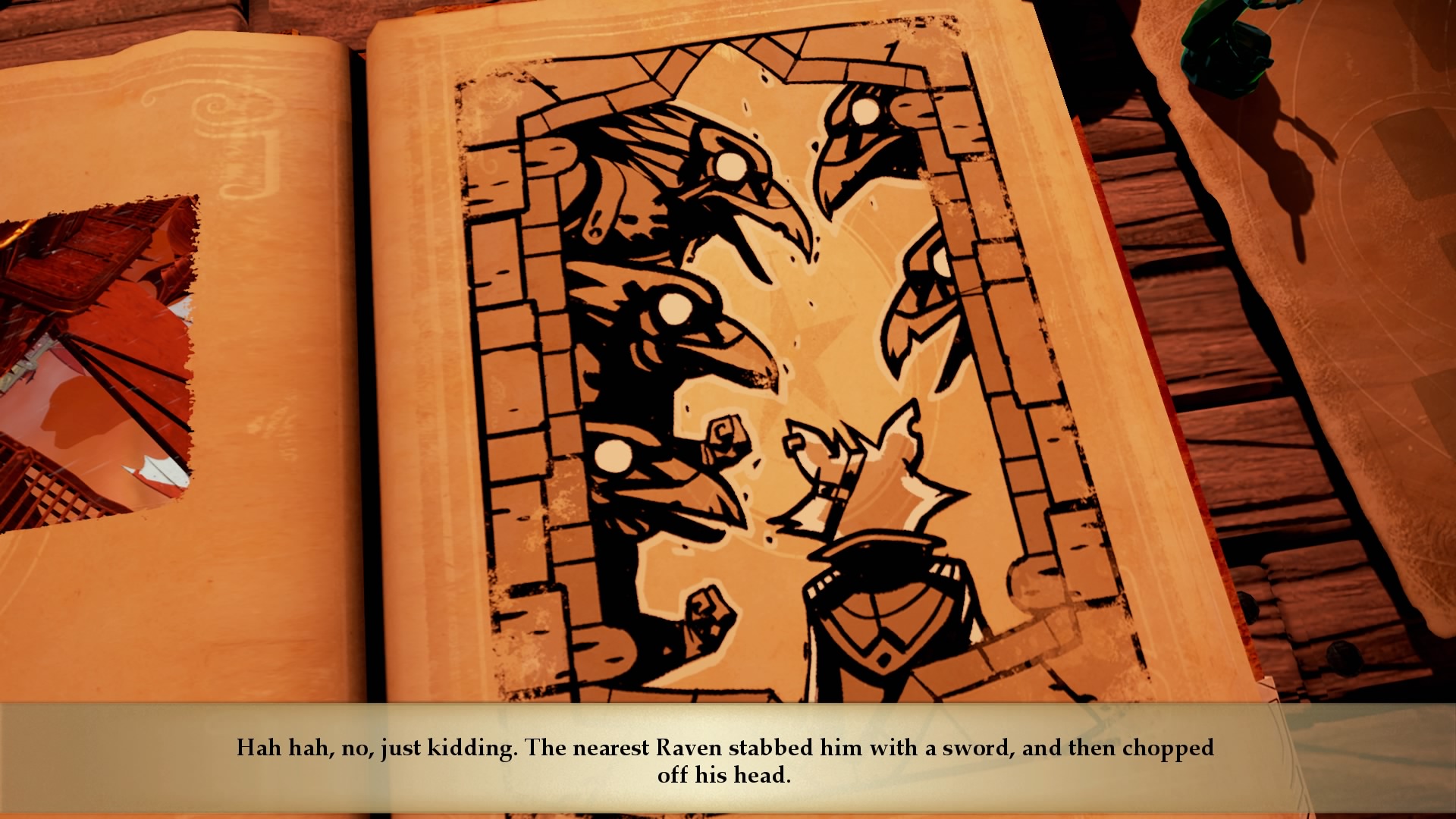 Mechanically speaking, the game's structure begins working on all cylinders after two or so such conclusions. That is, learning the fundamental truths, truths which will be maintained in each possible variation and ending of the story, opens up new choices, and also, thankfully, can trigger clues needed to navigate the story choices in new, unexplored ways.

While taking on five chapters is a relatively quick affair, all of this story navigation wouldn't be worth a thing if there wasn't some readily entertaining gameplay to go along with it. What 'Stories: The Path of Destinies' has in terms gameplay meat is a decent, if a bit easy, combo-based sword attack system. Reynardo attacks with Square, uses his hookshot with Triangle, and dashes with X. He can switch from one of four craftable swords using the d-pad, and each sword has a special ability that is deployed via R2. The key to note is that the Square button does most of the work. Countering is done by pushing Square and towards the attacking enemy, who is most likely a raven with a large "I'm attacking" exclamation point above its head. Performing counters and combos doesn't come much easier than this.

With a liberal combo meter and a quick to activate attack teleport, Reynardo can nearly button mash his way through most anything the game throws out. There are only about a half dozen enemy types and no bosses. In addition to the four swords, which double as special in-level door keys, and gems which grant buffs, there is an experience and player-level based skill tree, through which, Reynardo gets better counter, combo, throwing, stamina, health and so on. 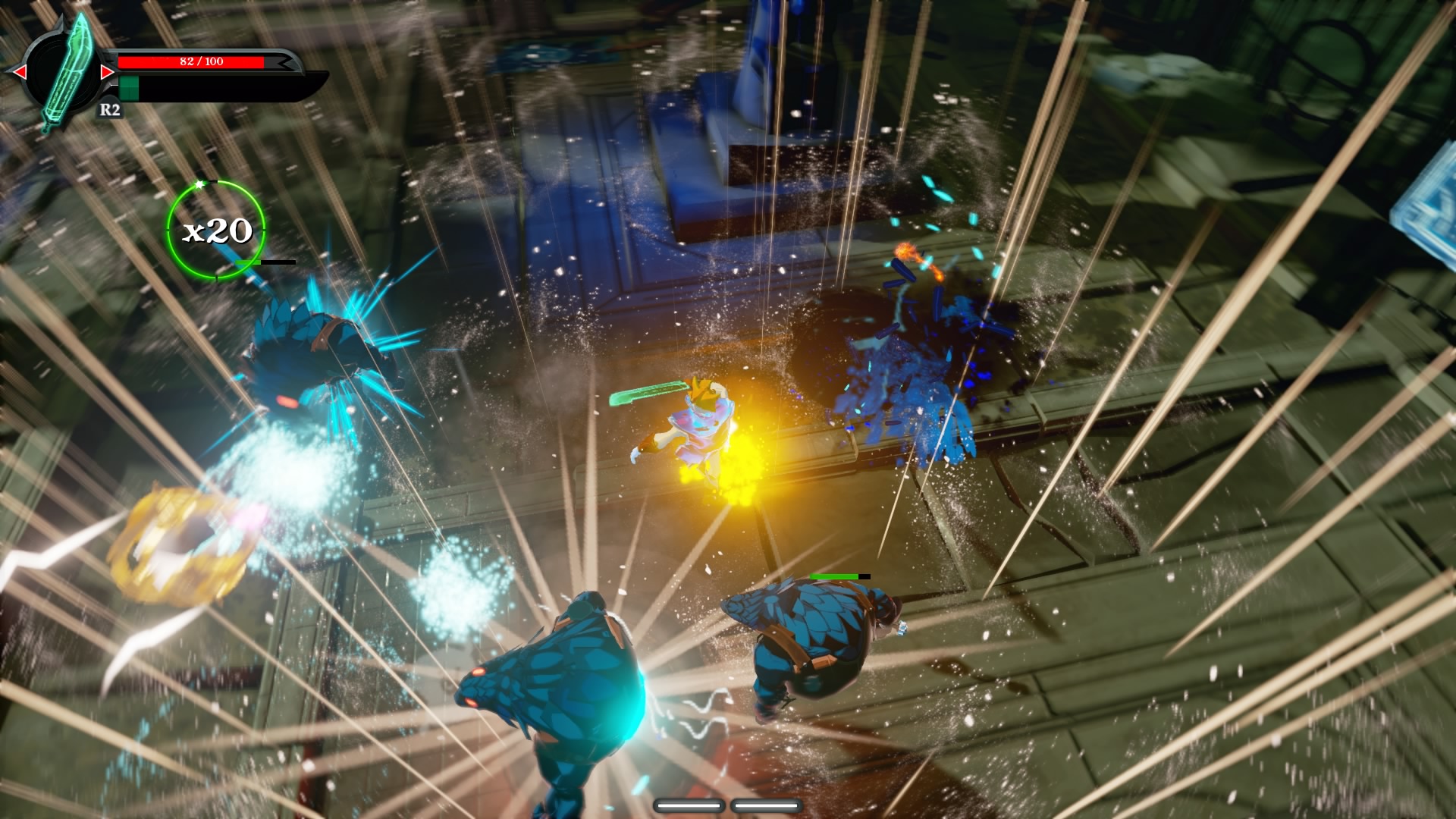 Things to be wary of in combat include ravens with shields, who can be dealt with in several ways, casters who buff ravens, exploding enemies, and painful eye-beam weapons. This is all fairly standard, and won't daunt fans of 'Devil May Cry' or 'Bayonetta' for even a moment. This may in fact be a good first action game, or an action game for less savvy players. One qualification though is that while it's easy to not get hit or only get once or twice, Reynardo isn't all that tough and so the player can't expect to get far by trading blows. A sword that uses the player's sword-ability energy meter to heal the player is easy to obtain and good for offsetting mistakes. Misstep with the eyebeam enemies, and suddenly the fox is only at 40% health. There's a checkpoint before every fight, so player death has almost no penalty, but the checkpoint doesn't give back health and neither does going on to the next chapter. Thus, after going through a whole level picking up unnecessary health, a bad encounter can mean a sudden rash of checkpoint resets.

It's for sure worth mentioning that while the levels are there to be explored, with hidden chests, and sword doors revealing side paths and loopbacks, there are only around a half dozen or so environments. These are mixed up somewhat, but players should quickly begin to recognize certain paths. The level built out of floating ships with its fleet-based background and firelight was impressive the first time out, but pretty mundane by the tenth time. 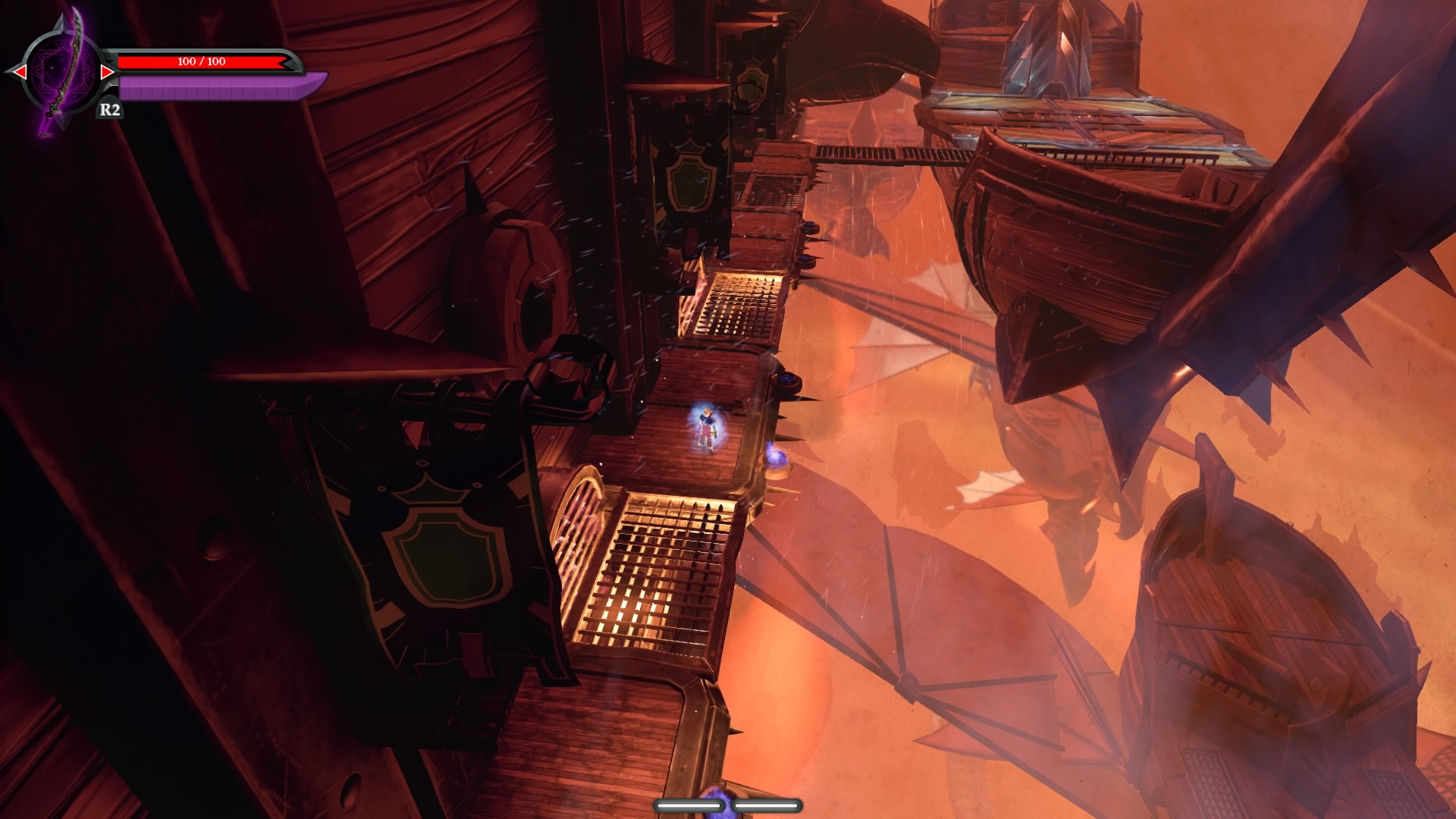 There's one specific area that tripped me up several times. There would be those eye-beam enemies, which stupidly Reynardo tends to jump in front of when attacking, making the easy enemies devastating. Then, at half health I would be checkpointed in front of a combat arena with four large statues that are the same grey as the floor. As a result, I would go in at half health and get caught on these statue bases (while the actual statues occluded), and get killed one or several times. Those statue bases make all of Reynardo's quick combat skills, the throws and hookshot grabs, and so forth, quite ineffective. Still, after the second or third time I hit that area, I recognized its flaw and was mostly fine.

I found that after hitting an ending or two, the game hit its highpoint and stayed there for a few more endings. Everything gelled, and I was having a great time, upgrading my sword, gems, and skills, finding hidden loot, and trying to incorporate each move into my combat style, all while trying to find that winning ending. 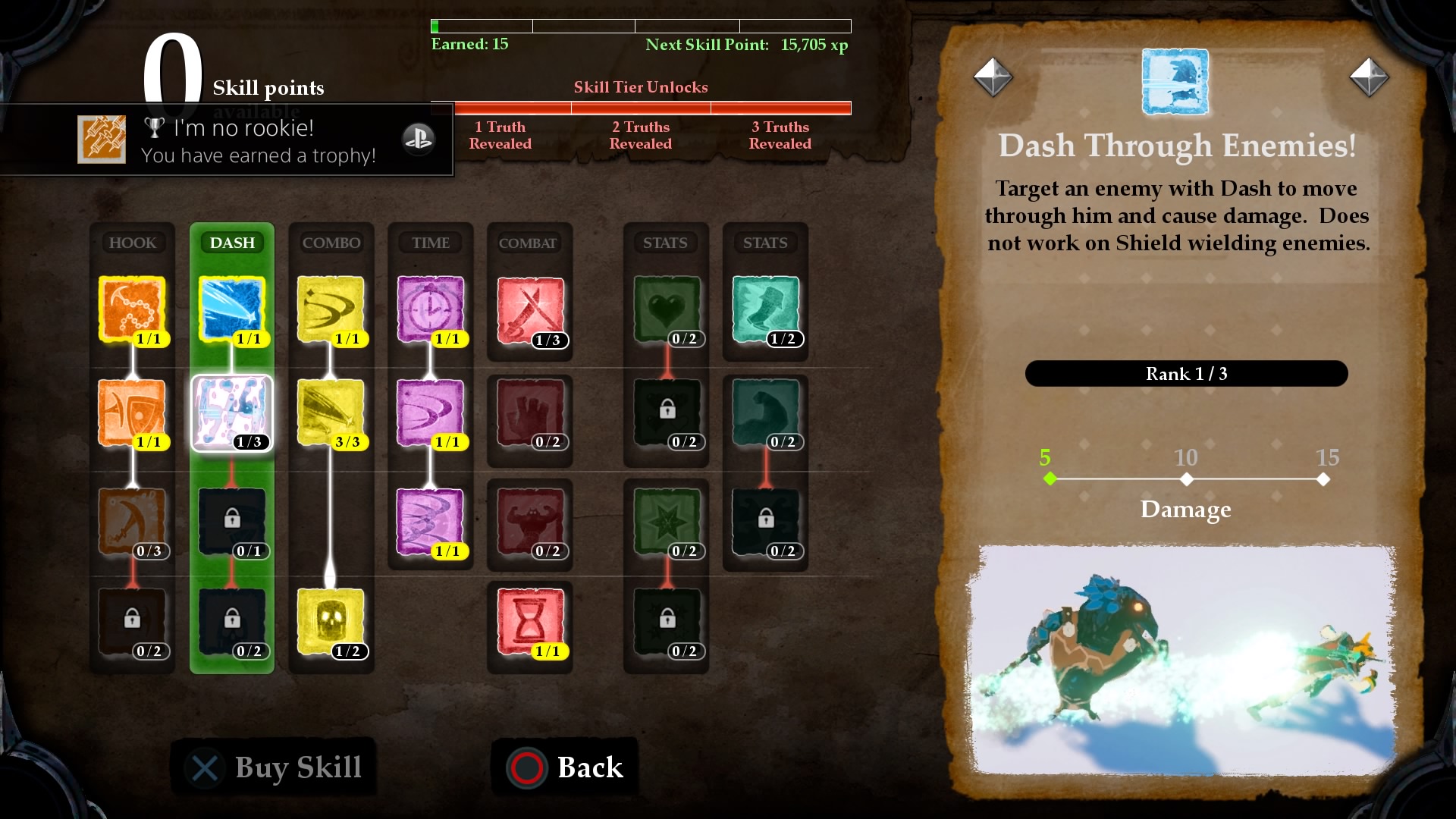 Subsequent to this peak, I ran out of sword upgrades and gems and interesting parts of the skill tree. I also felt overpowered, and in true 'Choose Your Own Adventure' fashion, ready to find that good ending. Certain mechanics in the whole story/choice part of the game continued to shift to help me along and to open up a few more paths, which did help me feel like I was progressing. While the choices could be a little cyclical, the interplay of characters, factions, and items was worth following even if my insights and choices didn't always result in the right path. 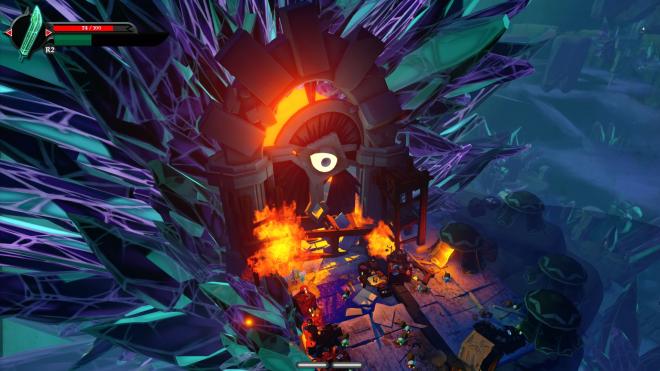 Spearhead Games has extracted quite the storybook presentation from the Unreal 4 engine, and even better, made some stunning isometric looks. At the same time, however, the game has a rough finish to it. Combat is generally fine, but several levels have that Unreal level streaming hitching at various points. Likewise, the giant floating platforms, one-way doors, and shortlist of level designs, could do with a lot more individualization. The characters fit into this colorful world well, but half-hearted in-level cutscenes are pretty stodgy. 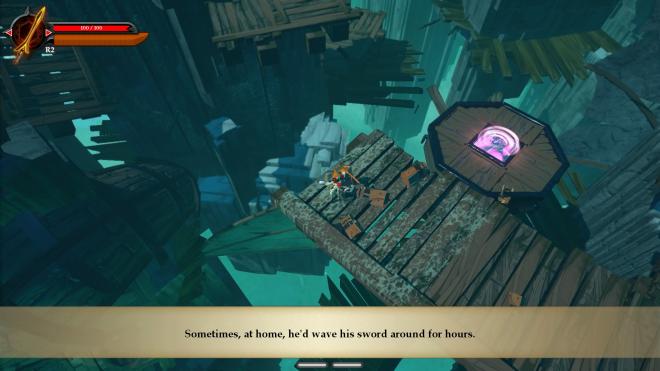 The singular narrator who voices all characters and chirps up regularly during levels is my main takeaway from the audio side. Many of the in-level jokes are pleasing to catch as the references are varied and subtly done. I found a line about needing to "construct additional pylons" especially funny. If anything, I wish that there was a larger cast of characters for the narrator to work with. 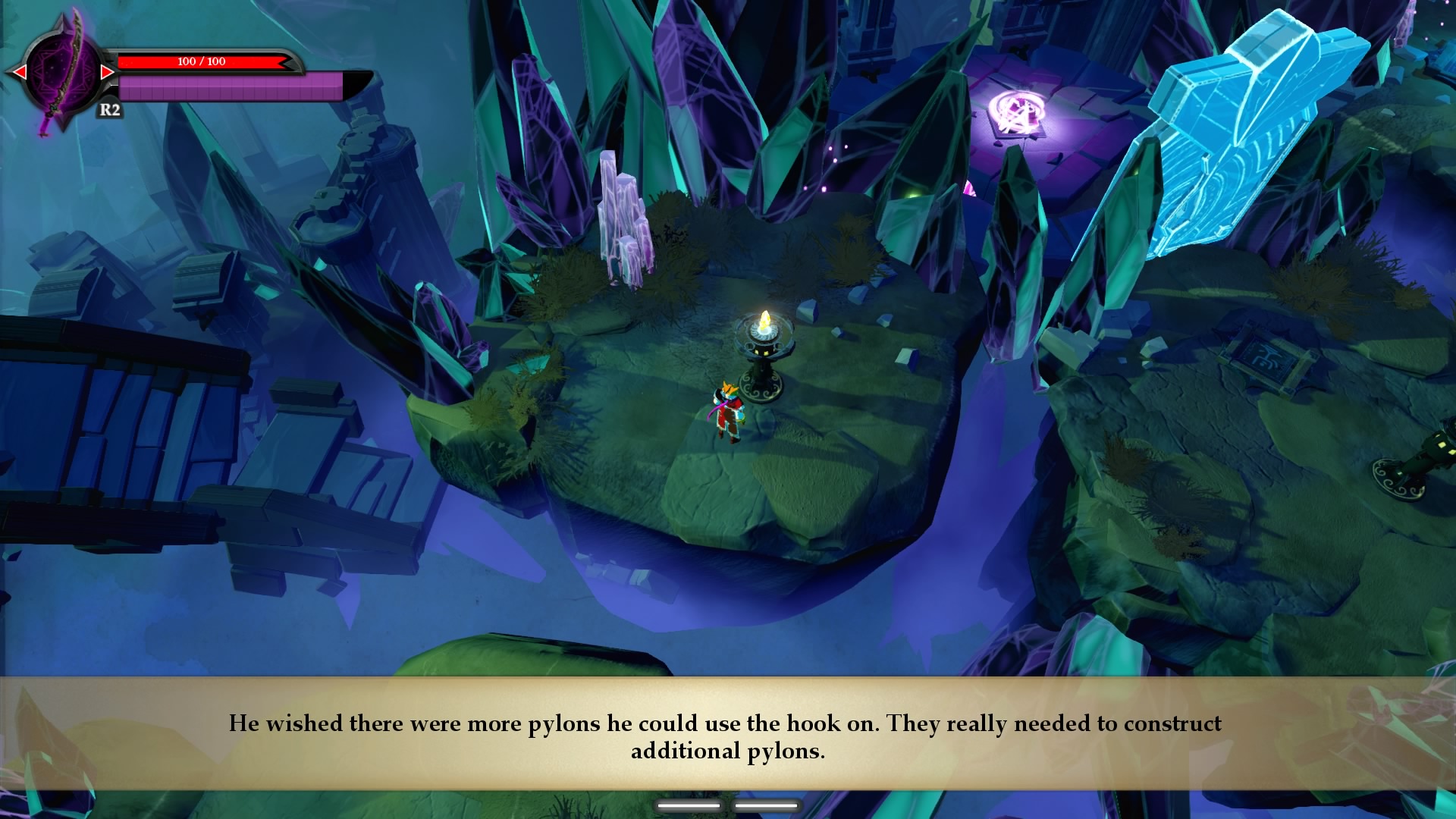 I found about five categorically important endings, but within those categories there are many more conclusions to search out. By the time I found those specific five endings, I no longer needed to search out and collect loot (aside from health and sword energy). With that in mind, I think this is a great game for anyone who is finding that games are way too long these days. 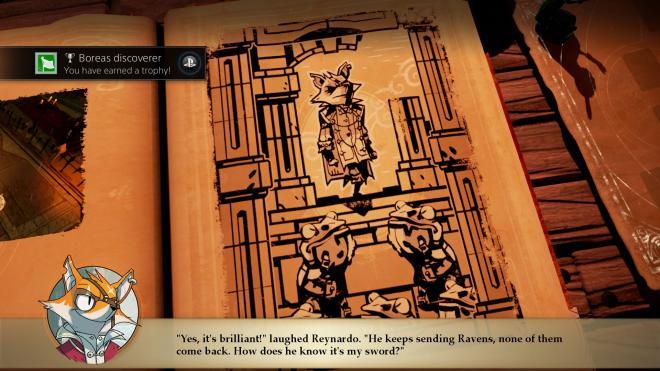 I enjoyed carving out a hero's path during my time with 'Stories: The Path of Destinies,' and I even entertained a non-gamer with the melodrama inherent to game's branching story. Action game fans will wish for a greater challenge, and everything that the game does well will make players wish that there was more of it.