The Game Itself
4.5 Stars
The Video: Sizing Up the Picture
3.5 Stars
The Audio: Rating the Sound
2.5 Stars
Replay Factor
5 Stars
Bottom Line
Recommended

In what the studio called "a passion project," Armature, famed for its developer origins in Nintendo's Retro Studios, has decided to merge the world of twin-stick, ship-based space shooters, with MOBA-like 10v10 competition. Adding to that, the game is cross play for PC and PS4 (not to mention that it debuts as a PS Plus game), and has its own special take on the idea of having a third side in a battle.

The team-based multiplayer shooter allows players to experience space combat on a sizeable scale, but has Armature Studio managed to make their first original I.P. an enjoyable one?

Few things have the ability to capture the imagination of both children and adults like space. As a kid, I always wanted to explore the cosmos as if I was William Riker, and get into intense battles filled with laser beams shooting in every direction. That childlike fantasy is what makes Armature Studio's 'Dead Star' so appealing straight from the start.

'Dead Star' pits two fleets of space ships against each other in a battle of intergalactic supremacy. The core goal is to destroy the enemy's base. That's easier said than done as players will have to first lower the base's barrier shields by taking control of all of the nearby sectors. The acquisition, and subsequent defending of bases makes up the core gameplay, and thereby matches feel like a constant tug of war, complete with a dangerous tipping point. 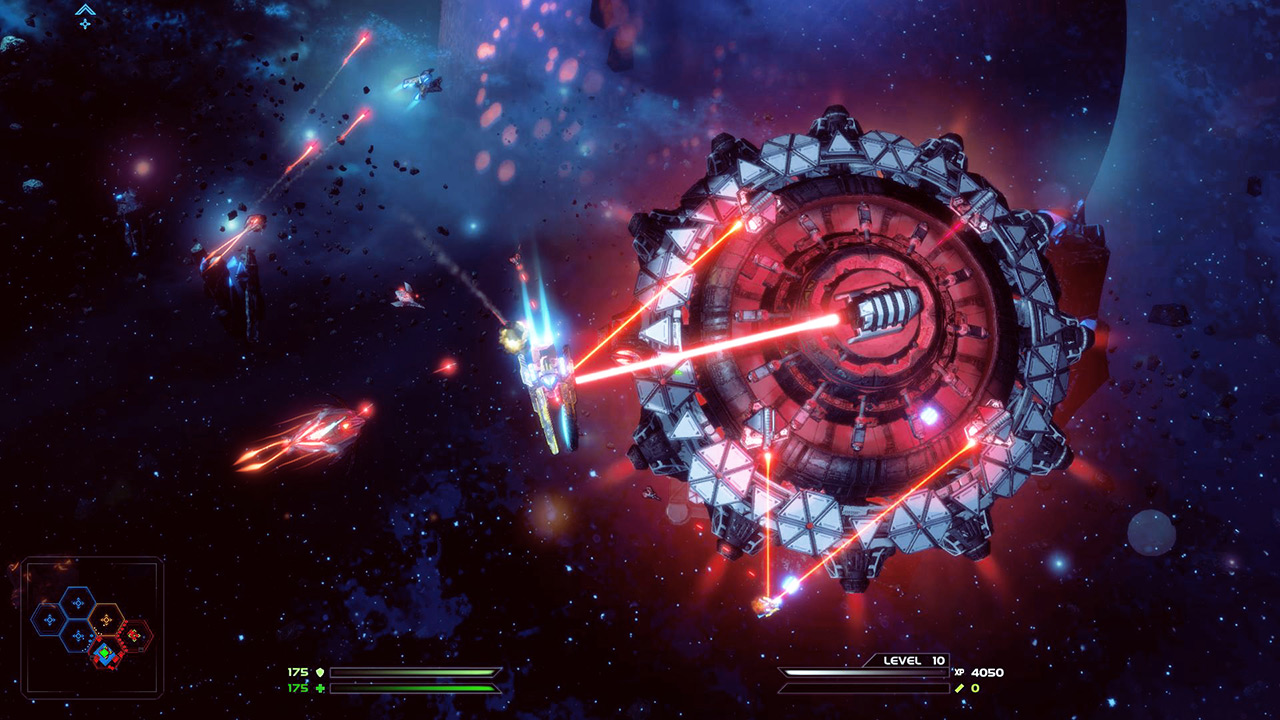 When a match begins, all of the space sectors will be unclaimed. This leads to a mad dash to the open areas. While taking over an area is as easy as destroying its defense systems (usually a set of turrets and shields) and staying within its boundaries for a period of time, there is also have  an onslaught of enemies to deal with while essentially playing king of the hill. I found that the beginning moments of a match were often some of the most pivotal, as when my team struck an early advantage it typically led to a victory.

Perhaps the best, and most rewarding part of 'Dead Star' is that you don't have to focus on taking over sectors and marching your way into enemy territory. Instead, I found enjoyment in using my spaceship to mine ore instead of getting into battles. I had a blast searching each level for asteroids that contained the precious metals needed to upgrade my team's outposts.

Bases can be enhanced up to 5 levels in strength, and I quickly discovered that the key to outlasting my opponent was to create sectors that can't be easily demolished. After several matches where I noticed my other team members were all playing offensively, I eventually decided to make base building my core duty. This paid off in a big way since I often had the highest point total on my team without gaining a single kill. 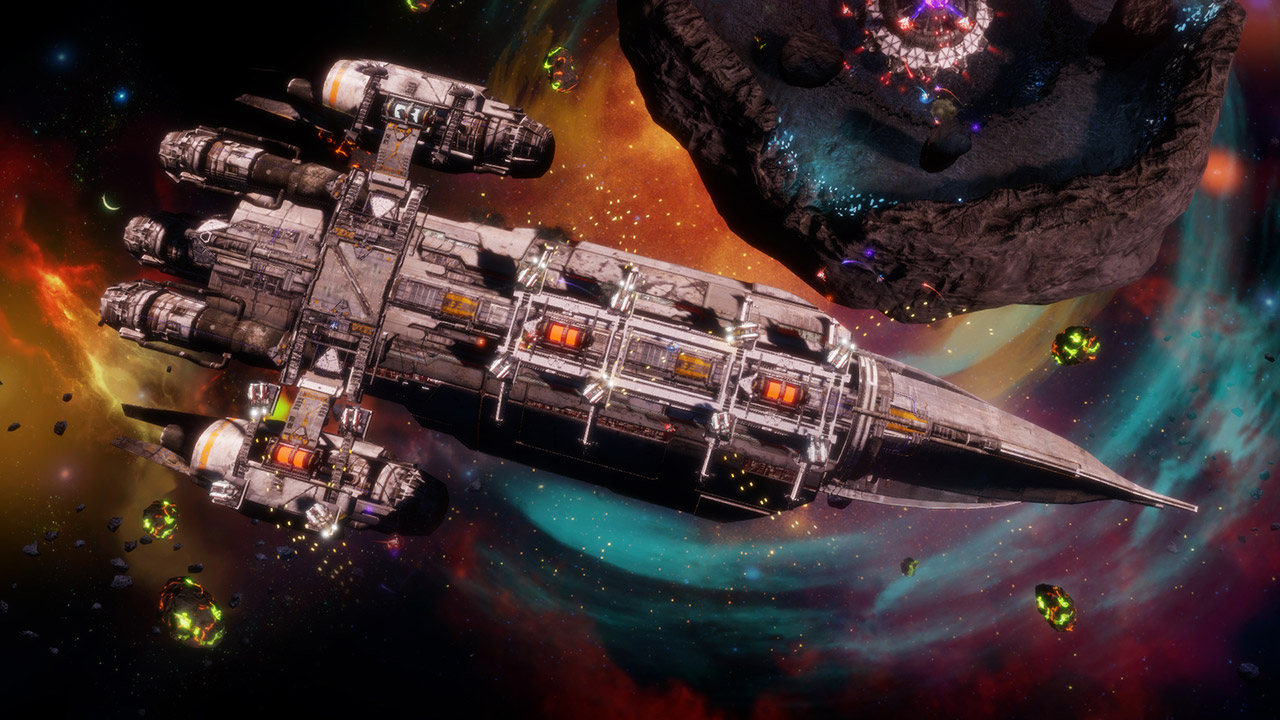 Building your outpost's defense may not seem offensive in nature, but it also leads to the game's secondary win condition. Each sector you control gains the team points, and there's always a point limit that can be reached if neither team can destroy a base. Once the prerequisite number is hit players will then get to see a satisfying cutscene where a missile is launched at the enemy's capital. This makes sure that every match in 'Dead Star' ends with a bang.

While the core strategy always stays the same, it'll always need to be tweaked depending on a number of variables. For example, I found that I couldn't play purely defensively during 5-on-5 matches. I just didn't have enough teammates in order to not be joining them in coordinated attacks. Likewise, in larger maps it made sense to try to test the enemy's strategy as often bases wouldn't have a single player guarding them. Catching the enemy by surprise is the best advantage you can have, and I felt like my knowledge of 'The Art of War' was finally paying off.

What I really ended up loving about 'Dead Star' was the sense of camaraderie that it instilled in my mind. I was able to play an important role, not as an individual, but as a team. Success is predicated on everyone playing their part to perfection. As such, the game truly shines when you get a group of friends together and are able to plan your attacks over voice chat. I felt like a leader coming up with impromptu strategies to counter enemy attacks, and plans that would lead to our ultimate triumph. I genuinely felt proud of my team when I led a successful sneak attack on a distant sector that ended up changing the tide of battle.

After the end of every match, players are given several different rewards for their play. These range from cosmetic bonuses such as new paint styles (I'm rocking a pretty rad zebra print for my ship) or components that can be used to permanently improve your ships. The most unique (and rarest) reward, though, is a capital ship contract which allows players to check out the game's secondary mode.

This unlockable mode is called Escape Run, and players will get one chance at escorting a giant ship to safety. You'll actually get thrown into live player matches while escorting the ship, which is an extremely cool concept. I wasn't able to successfully finish the Escape Run on my attempt, but the game promises good loot for those that do complete the escort mission. It's a cool addition to the game, but since it's so rare (it took me several hours of play before I got a single attempt) players won't get to experience it often. 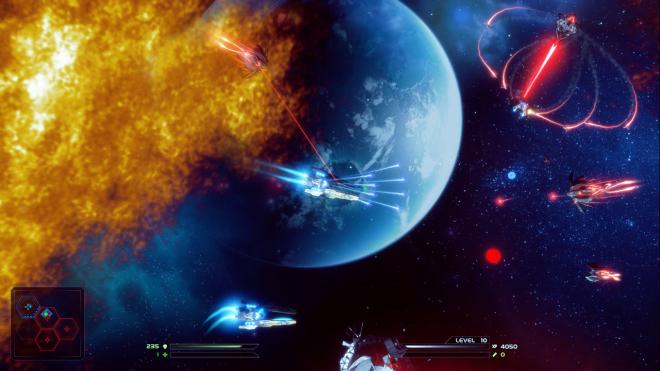 'Dead Star' won't blow anyone's mind graphically, but it's definitely easy on the eyes. Each level is littered with wreckage, asteroids, and interstellar clouds. Perhaps the most impressive aspect is the backgrounds, as you can see planets, asteroid belts and areas that are light-years away. All of these details really bring the feel of piloting around in outer space alive. 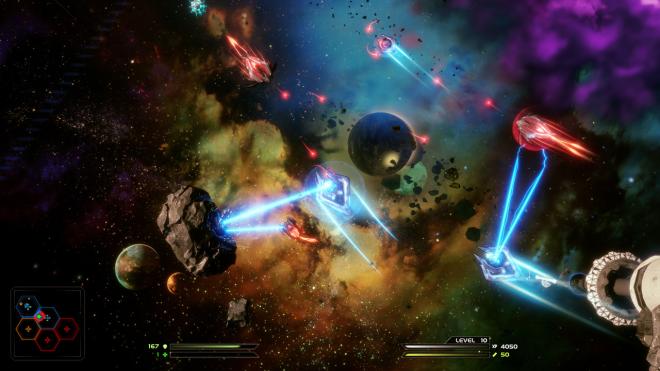 One of the weakest areas of 'Dead Star' is its sound design. The lasers from different ships sound almost identical, so players can't really use audio cues to pick-up on what enemies might be coming. What's there largely sounds fine (the lasers do make a satisfying "pew"), but it doesn't really impact the gameplay like it could've. The soundtrack is also largely forgettable, but that's fine since I spent most of my time talking to other players.

There's so much depth to 'Dead Star' that you'll immediately feel compelled to keep coming back to it. I had a great time checking out the 9 different ship types (there are larger vessels meant for combat and smaller ones that are perfect for mining), and finding which ones fit my own play style. Thankfully, you can switch ships each time you die. This means you can try out a new spaceship without being stuck with it for an entire match, which is good for variety and for tactical shifts. There's no real penalty for trying something new here, and that's why it's such a welcoming experience.

Thanks to 'Dead Star' launching as a PlayStation Plus title, there's also a very lively online community. It's incredibly easy to find a 10-on-10 match, and since most PS4 owners have access to the title you won't have to look hard to find buddies to play it with. This is an extremely satisfying game that I see myself coming back to for months just like 'Rocket League.' 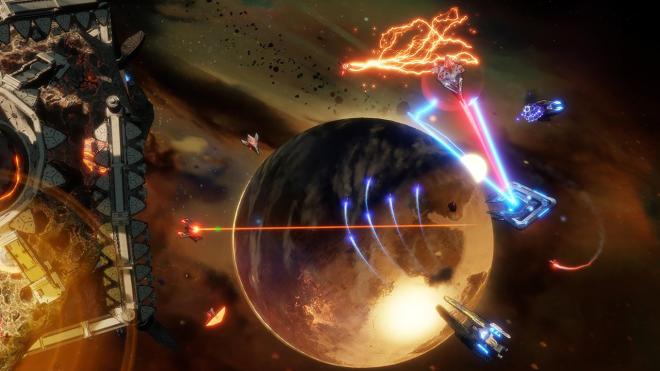 Armature Studio is really coming into its own as a developer and 'Dead Star' is proof of that. It's one of the most accessible MOBAs to date, and doesn't feature the high barrier of entry that plagues so many of its contemporaries. This is largely circumvented thanks to a wonderfully done tutorial. There's not another game quite like it on the market, which ensures that I'll continue to go back to it frequently.