The Game Itself
4 Stars
The Video: Sizing Up the Picture
4 Stars
The Audio: Rating the Sound
4.5 Stars
Replay Factor
5 Stars
Bottom Line
Recommended

Digital PS4 version reviewed. Review includes all three tables in the pack. The PS4 version is cross buy with the PS3 and Vita versions.

Zen Studios continues their good work of making console (and handheld) pinball adaptions of popular licenses. The latest property to make the 'Zen Pinball 2' plunge includes the 'Alien/Aliens' franchise, which as has been common in this century, includes a bit of the 'Predator' franchise.

Cutting right to the chase, the 'Aliens vs. Pinball' pack fits in well with Zen Studios' other recent table designs. Those familiar with recent releases such as 'Star Wars Pinball - The Force Awakens' and 'Balls of Glory Pinball' will not be caught off-guard with 'Aliens vs. Pinball.' The biggest exception might be the voice work for 'Aliens Pinball,' which I will come back to later on. Otherwise, these three tables maintain a loosely defined pinball standard which I enjoy while offering a nice amount of in-pack variety. For further nuances, let's get into the specific tables.

Make no mistake, 'Aliens Pinball' is the feature table for the pack. The film itself is an enduring sci-fi classic that exists in a bizarre often imitated but never duplicated space. It's almost as though any film-makers tasked with creating something like 'Aliens' immediately go running in the other direction. The payoff then in 'Aliens Pinball' has two important vestiges. First, anything lifted straight from the film, like the sound effects, the recorded dialog (!), the 'Aliens' font marquee, etc. does wonders for making the table fun for any 'Aliens' fan. Second, the wonderfully realized elements, such as the domineering, yet restrained alien queen, the M577 APC, the gun-toting Ripley, and so on, ties in with those production assets into a the kind of offshoot companion product that fans crave. 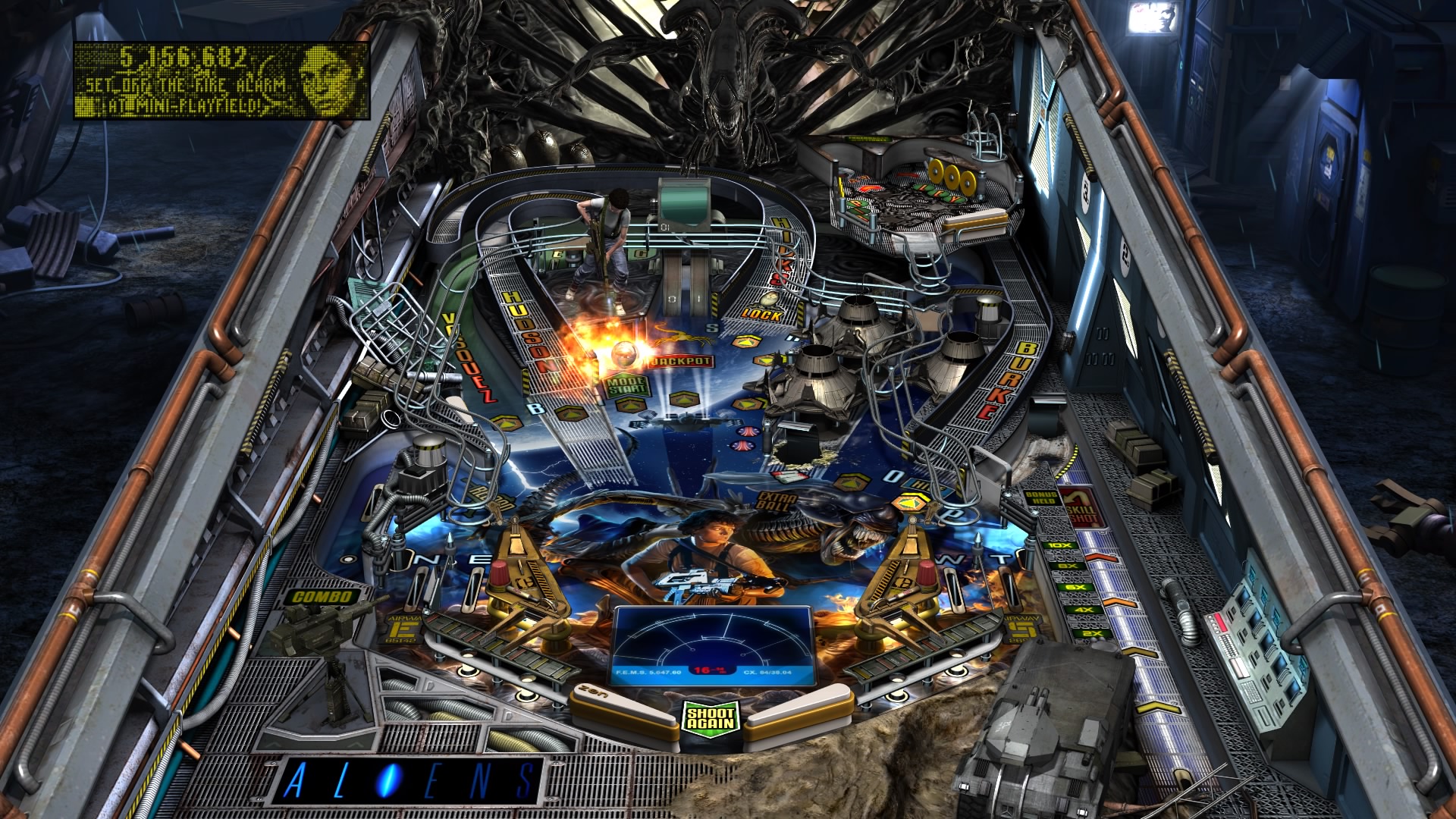 This table has a somewhat restrained design. That is, the elements in play could all likely have been built into a real pinball table, and we're talking 1990's. So with the great production quality and plentiful movie touches, this table is something that an 'Aliens' fan could hope for from an actual licensed, show-stopper pinball table.

And frankly speaking, that is also the problem. This is a tough table, and it's one that I can see sucking quarters or credit plays from arcade goers all while most players will be lucky to get through a single mission. That difficulty is a factor of the gutters, the open center, and the "hit all spots on the table" nature of some of the missions. This is a table which requires a nudge in order to hit the skill shot. I can do it with some regularity, but it feels like cheating.\ 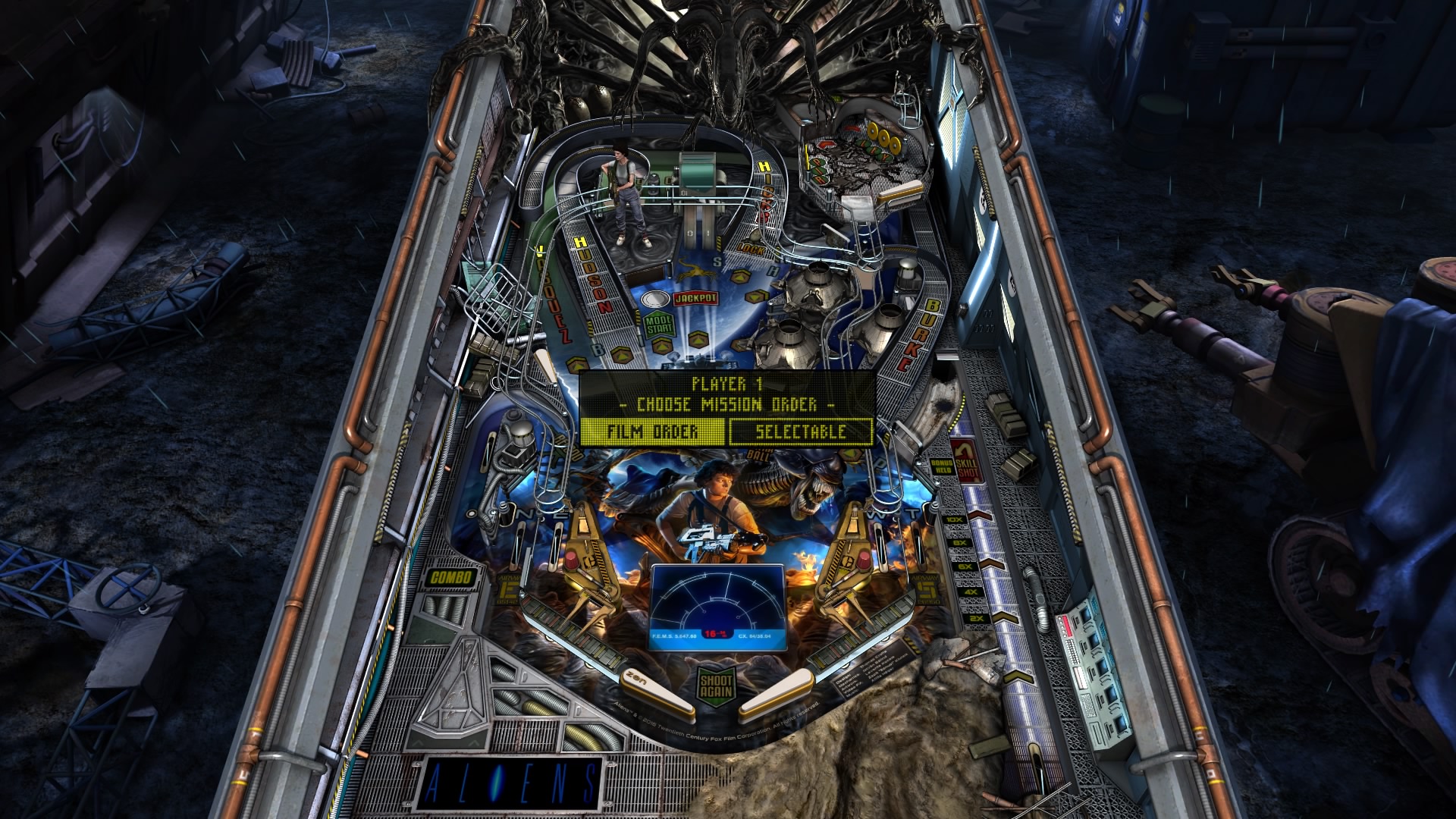 I have a tricky time with both the mission start spot and some of right side lanes. This leads to far too many "game over man, game over" quips as the ball goes down the drain.<./p>

When starting a new game, the player gets the option to either play the missions in film order or by manual selection upon activations. While it's fun to get to pick, it throws off my concentration. Unfortunately, for every fun fight off the alien with fire mission, there are two activate each lane missions.

If I sound a little salty, it's due to the memory of quarters lost to similarly entertaining but infuriating tables. And like those tables, each time I lose, I want to immediately go again to erase that cheap feeling.

No matter how it's packaged, the 'Alien vs Predator' table is the throw-in table in my eyes. That's for two important reasons. First of all, I have seen 'AVP: Alien vs. Predator' exactly one time, in theaters, and it's debatable whether that one time was too many. The other reason is that this is the most extraordinary of the three tables. It's the table that really breaks with what is possible in a conventional table. I like a little creative license, but the Zen Studios more extreme departures are usually less attractive for repeat play. 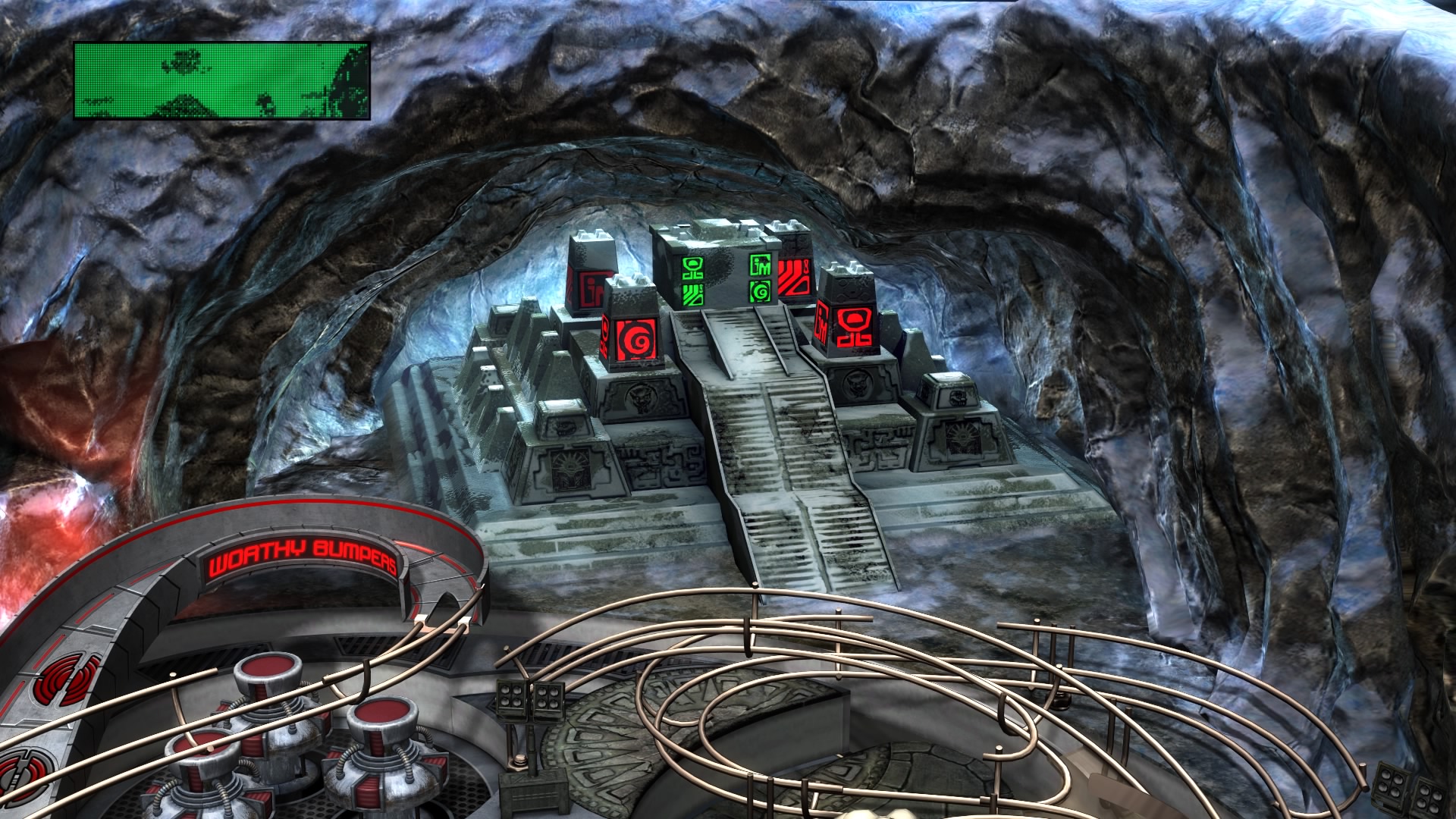 And though the film is fuzzy in my memory, it's seems to be at the forefront here. Specifically, the labyrinthine nature of the pyramid makes for transformations of varying size while the alien vs predator combat is undercut by the ever present, ever baffled humans. And yet, even with my distaste for the movie (and its sequel) there are a few nice moments. I especially like the xenomorph that grabs the ball to get missions started, and who wouldn't like the predator vision missions? 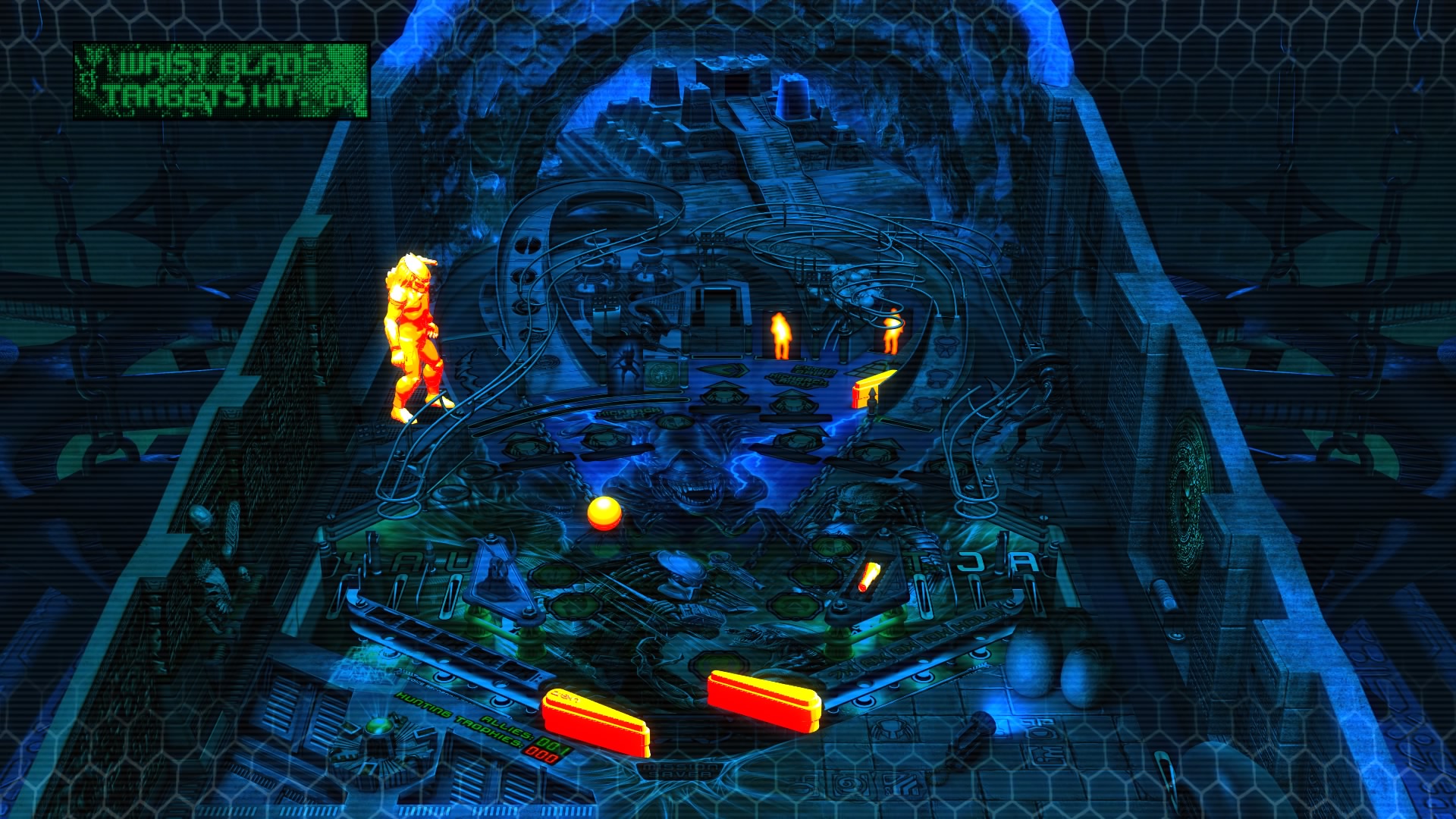 Unlike the other two tables, 'Alien vs. Predator' is a scorefest. The lanes are much safer, and the missions tend to remove the danger of losing a ball. The trap frenzy and block puzzle can be repeated over and over and the score will just go up. The trick shot is child's play. So really, this is a table to play when the other ones (all tables, not just the ones in this pack) feel frustrating. The relative ease of play means that each ball can really last. At the same time, however, this table lacks that element of aggravating challenge.

Back in 2014, Creative Assembly released the first-person survival game, 'Alien: Isolation.' That game and its story is a significant, if recent, addition to the shortlist of enjoyable 'Alien' lore. Returning to it via 'Zen Pinball 2' is a nice reminder of a special game and of Sevastopol Station. The table itself sports a familiar Zen Studios' presentation. Two figures, Amanda Ripley and her xenomoprh antagonist, walk, crawl, stalk, and even jump around the table. I've seen this in a lot recent tables over the past few years, but Ripley the younger's need to be evasive makes for a cohesive effect. 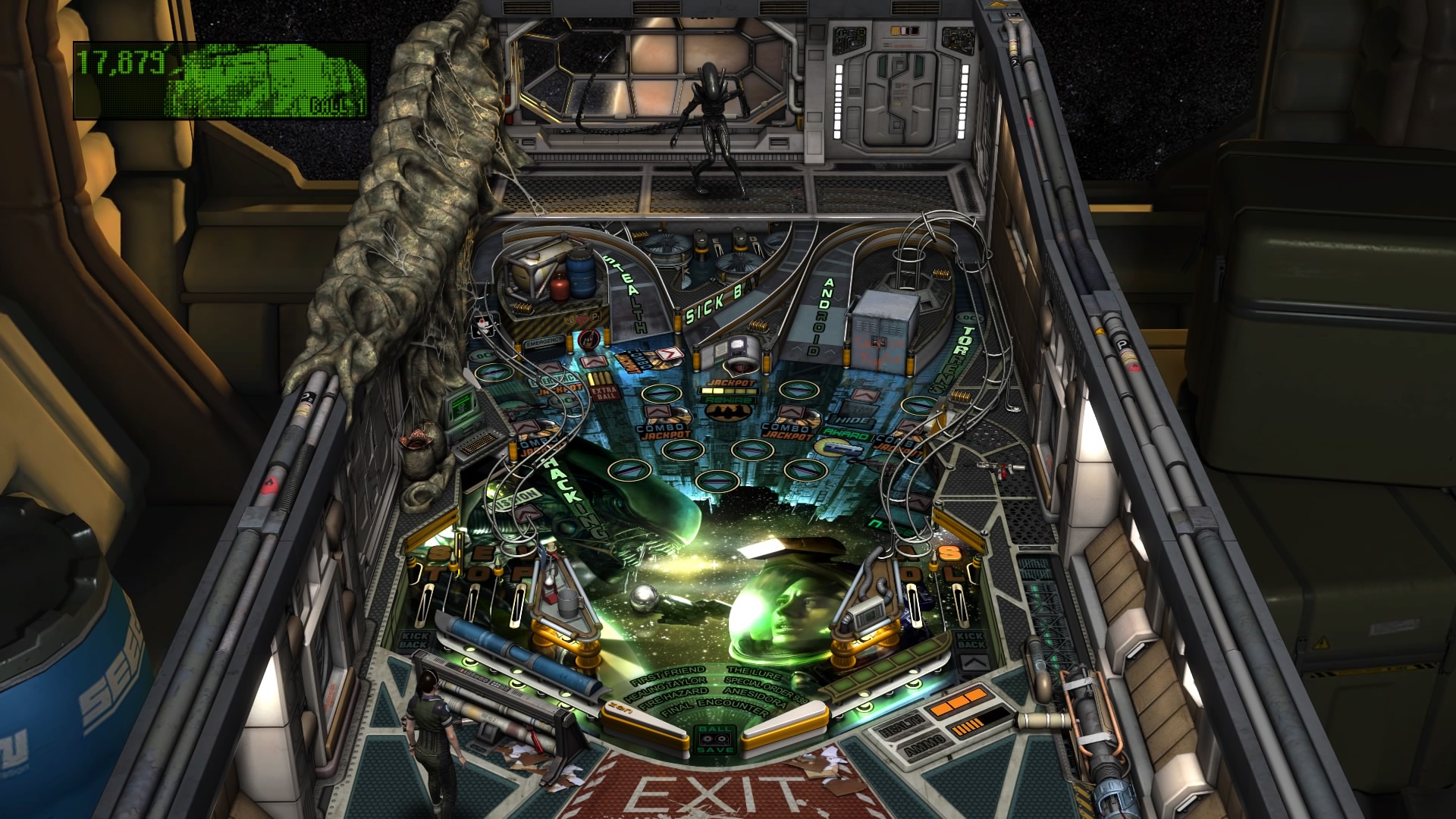 In terms of the table's design, I find it a bit frustrating. There are kick backs that need to be activated, but when inactive, the ball death is always too not far off. Unlike the other tables in this set, the third flipper is awkward at best. Ditto for the trick shot, which I can hit with some generous plunger spamming. I do like the missions, which work in nice game aspects like being able to hit targets in the back. 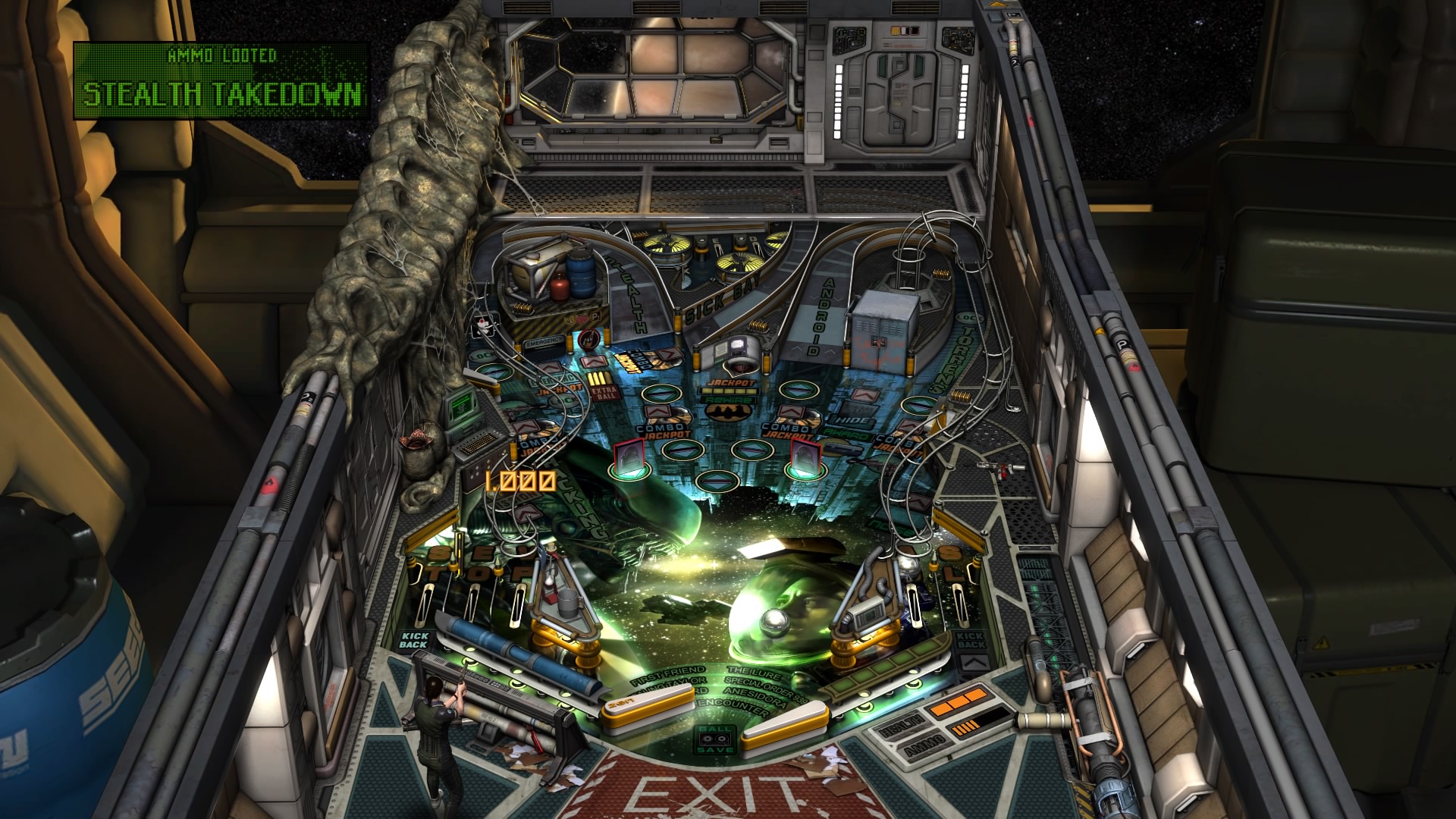 Ultimately, this table compliments the 'Aliens Pinball' table with the newer source material and moving characters while hosting a more visible play space. 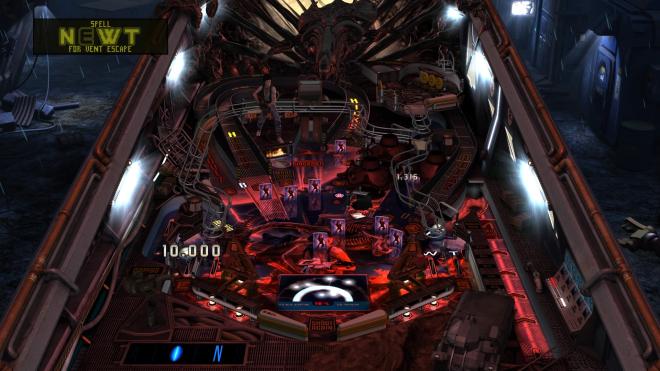 There is some real love and affection on display in these designs. From the cabinet art to the score window on down to simple elements like bumpers, the tables are packed with fun details. 'Alien vs. Predator' may lack the gravitas, but it's still been realized to an impressive degree. These PS4 versions look and play great. If I had to complain, it would be because of certain animations, particularly in the 'Alien: Isolation' table. There's a certain animatronic marionette style employed that works great for Ellen Ripley, but not for Amanda. 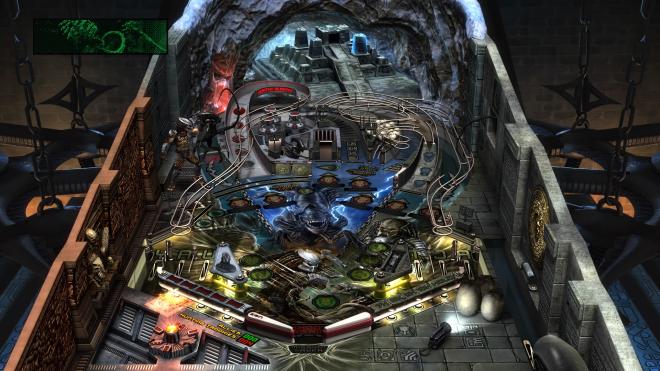 Bringing in the dialog from 'Aliens' really makes this set a can't-miss. Ripley, Hicks, Bishop, and of course, Hudson not only are fun to revisit, but also help to invoke the idea of a real pinball table. The other two tables merely sound fine in comparison. 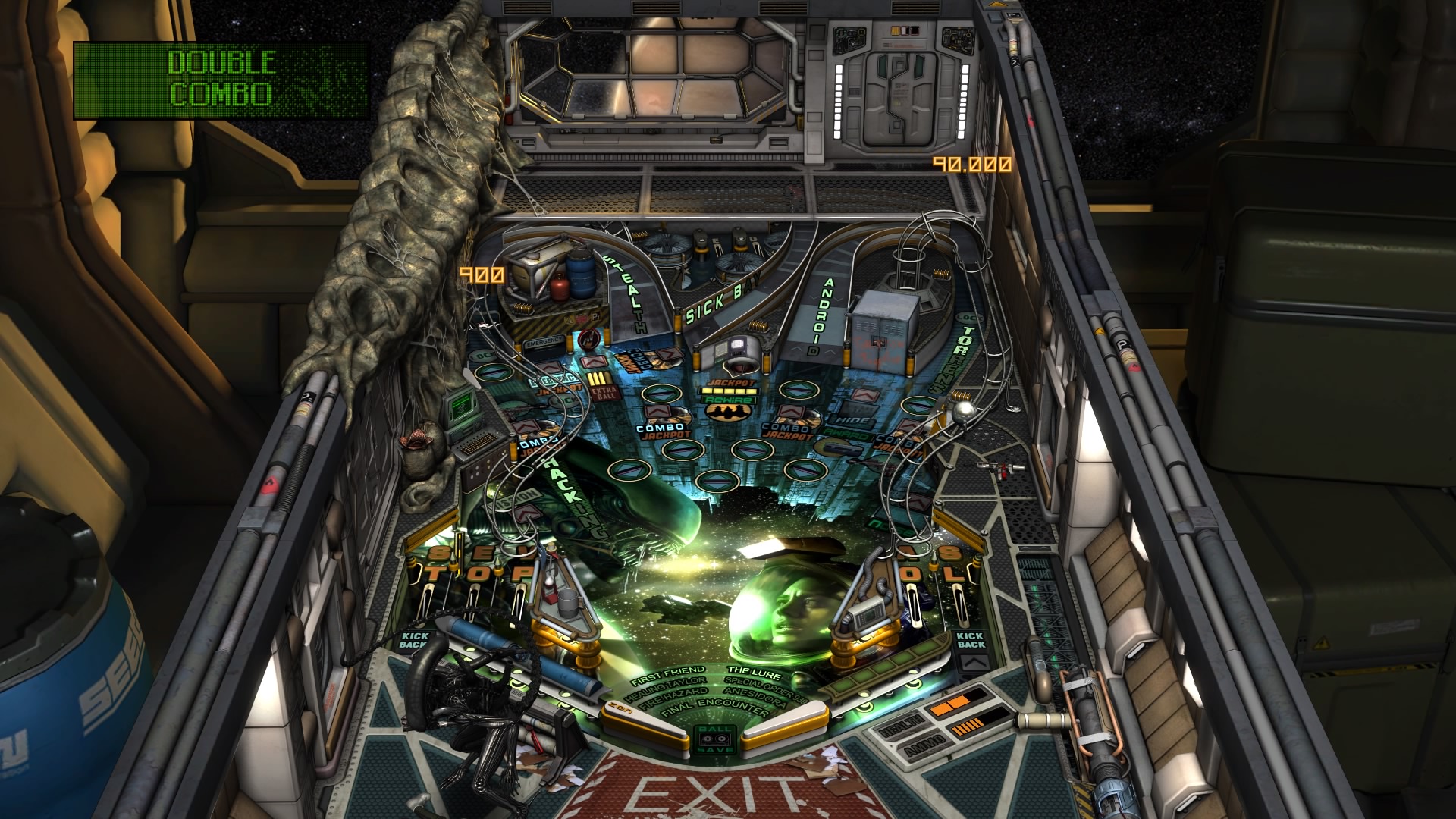 For hardcore fans of 'Alien,' 'Aliens,' and 'AvP,' these might be the only pinball taste they'll really need. For other, more general pinball fans, this is a topnotch set that deserves a chance to be part of anyone's 'Zen Pinball 2' or 'Pinball FX 2' libraries. As always, having the various leaderboards is a big part of the experience. With these tables in particular, I think the mission design is worth pursuing even without a consideration for score. Although I didn't play these tables on my Vita for review, I certainly will be as I love firing up the game when waiting in an airport or on a plane. Activating and beating all the missions in 'Aliens vs. Pinball' is not a simple undertaking, but it's the kind of thing that I can try for on a whim at any time on the console or in transit. 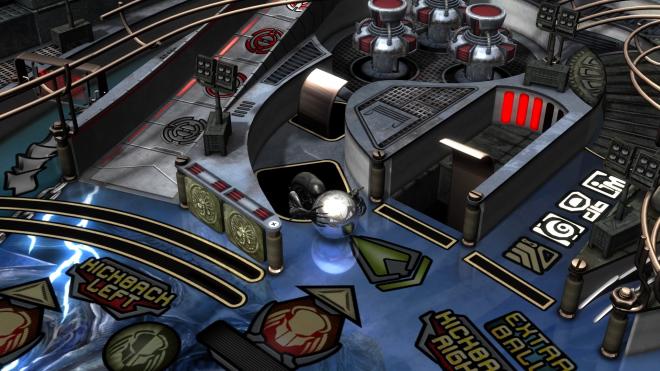 Fans of 'Aliens,' myself included, should be pleased when they see Ripley and co in action in a pinball setting. It certainly makes me think of the heyday of licensed pinball tables. And that's just the beginning as the two other tables in the 'Aliens vs. Pinball' pack make for a great set with a nice degree of design and presentation variety.