The Binding of Isaac: Afterbirth

Since its humble Flash release in the fall of 2011, 'The Binding of Isaac' has enjoyed strong sales, strong reviews, and a multitude of remakes and expansions. The 'Afterbirth' DLC is an add-on for the 'Rebirth' remaster, released in late 2015 for PC and now available for PS4 and Xbox One.

While I had followed 'Isaac' for years, I never experienced its grisly pleasures until last year’s Xbox One port. On my first playthrough, which probably lasted less than five minutes, I was thoroughly crushed and defeated, my lifeless little body tossed away like so much garbage. It was love at first sight. I have had a thorough obsession with the game since then, squeezing in playthroughs when I can and going on epic benders far too often, even purchasing a Vita copy so I could take it with me. Its replayability is matched only by its sheer strangeness. Whenever I play it in front of an uninitiated viewer, they are inevitably amazed and disturbed by the gruesome spectacle of Oedipus, toilet humor, and child abuse. It really is one of a kind. 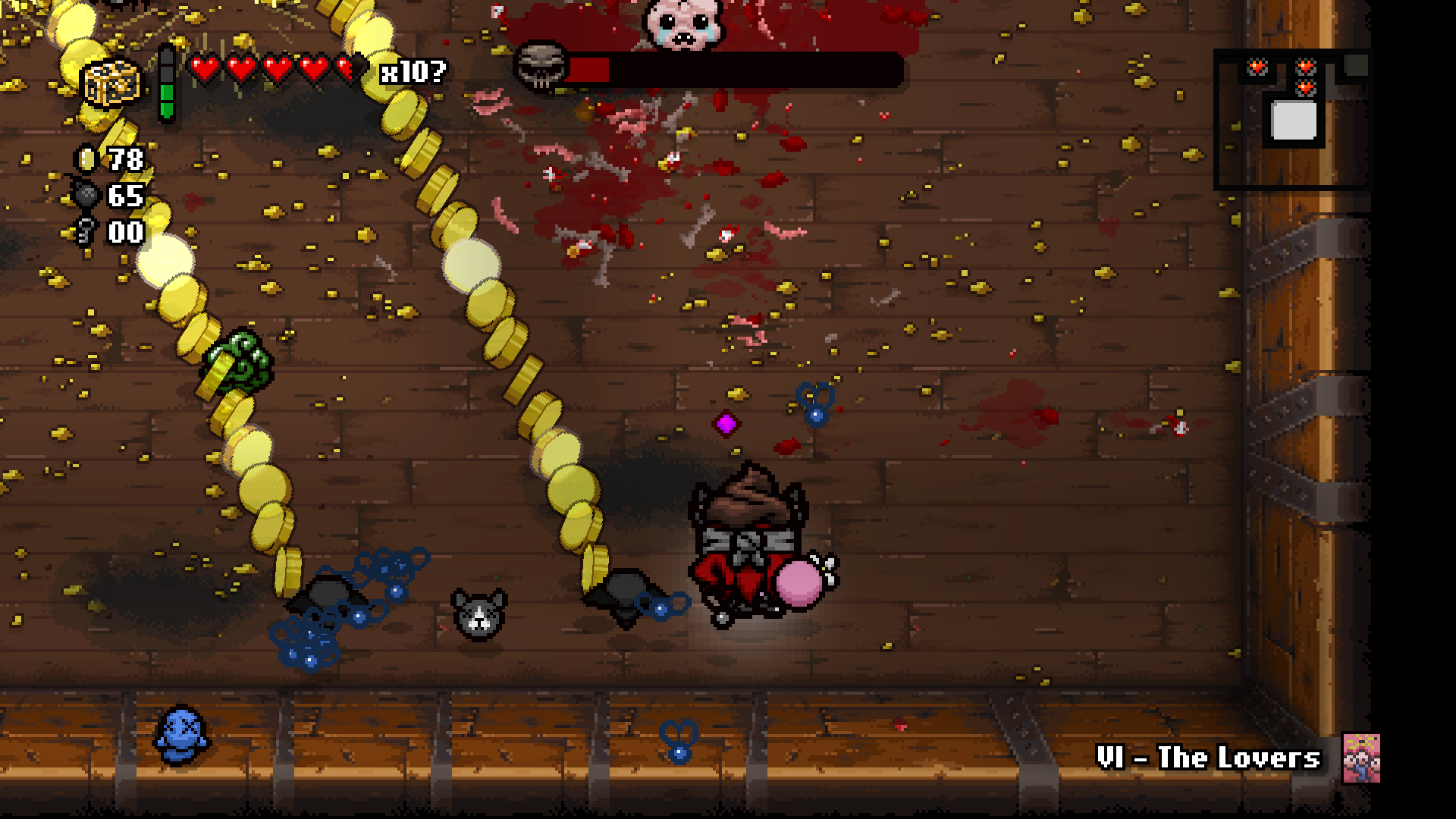 'Afterbirth' changes some of the mechanics in 'Rebirth', but more importantly it adds a huge amount of content. By far the biggest addition is Greed Mode. This is played separately from the base game and has very different rules. It trims down the floor layout and many of the specialized rooms, condensing everything into an arena, a shop, and some simple item rooms. All I had to do was survive eight increasingly difficult waves of enemies in the same room, then two boss waves, and then do this seven times until reaching Ultra Greed, one of the most difficult and frustrating bosses in both 'Isaac' and possibly gaming in general.

Greed Mode was initially maddening, but became more enjoyable after I got past the steep learning curve. It’s 'Isaac', but not the same 'Isaac' we’ve come to know. It’s a thoroughly different animal with its own eccentricities. The first six levels are tough but not impossibly so, and playthroughs are quick enough that losses aren’t too unpleasant. The real problem is Ultra Greed himself. This one fight makes or breaks the entire run. Unlike regular runs where partial playthroughs might still bring rewards in the form of unlockable items, a loss against Ultra Greed means no completion marks and no ability to feed coins into the Greed Machine for exclusive rewards. Many, many of my Greed runs were successful until the final boss. I dodged wave after wave of creepy baby, made smart choices in the shop, and would then make a single mistake against Ultra and lose everything. Then again, it is called Greed Mode after all, and is intended to provide a high challenge to players already accustomed to playing a very challenging game.

The Daily Runs are another new way to play. These are seeds provided to the community with their own special, sometimes bizarre rules, not unlike Challenges. Every day has its own leaderboard, creating a minigame of sorts where players can compete for bragging rights amongst their friends and the community at large, or just test their own luck against the Isaac gods.

The two new playable characters are Lilith and the Keeper. Finishing my first Greed run as Azazel unlocked Lilith, a peculiar Isaac clone who cannot fire tears. She defeats enemies by giving birth to familiars, sometimes huge amounts of them, who can produce tears with any qualities that Lilith would normally be able to. She is great for Greed mode, as the longer she spends in one room the more familiars she can spawn, and in Greed the fighting takes place only in one room. After a full round I would have a set of four children, each firing their own tears, and sometimes far more if I had been able to pick up other familiars along the way. I have not yet unlocked the Keeper and I don’t anticipate doing so for some time, as he requires 1000 coins in the aforementioned Greed Machine. It is undoubtedly a grind, but so far it has kept my attention. 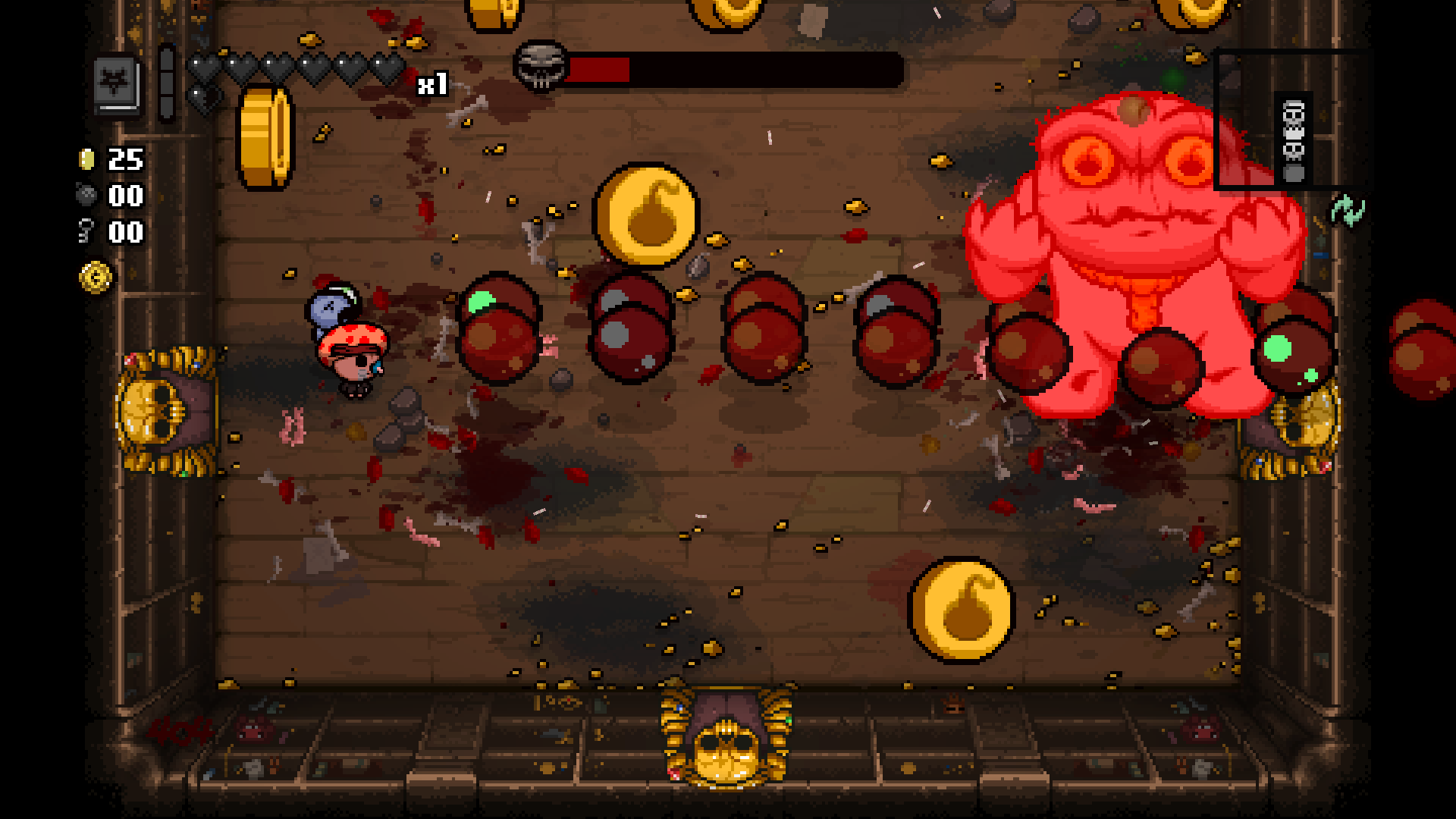 The rest of the 'Afterbirth' content can be loosely described as "more". There is more of everything: items, trinkets, pills, chests, room formations, floor themes, bosses, ad nauseum. Of note are the revised transformations and synergies. When Isaac picks up certain item combinations, his tears can take on amazingly absurd properties, filling the entire screen with bombs and squiggly lines. The transformations are uncommon enough to make them a treat instead of overpowered gamebreakers. 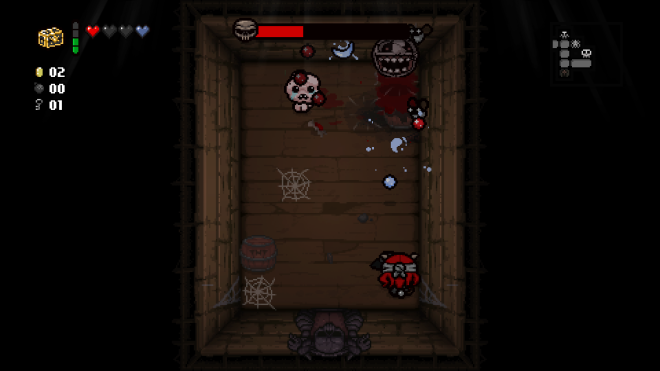 'Isaac's bloody, infantile presentation looks better than ever with the new boss types and alternate floors, like the scarred womb. Ultra Greed especially is like nothing we’ve seen before in 'Isaac'. The synergies can be awesome, but on the Xbox One they can also burn down the framerate. 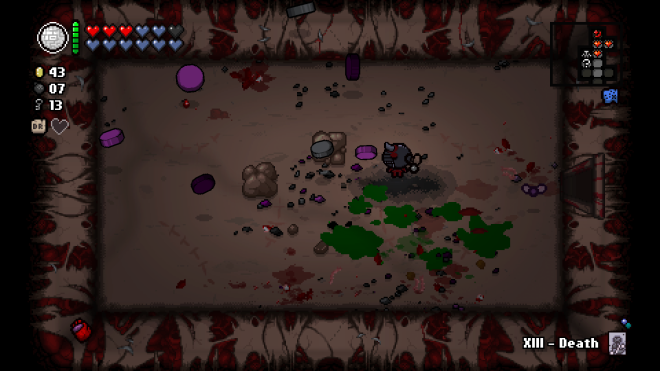 Longtime 'Super Meat Boy' and 'Isaac' contributor Ridiculon developed nine new tracks for 'Afterbirth'. They are great almost to a track, layering electric guitars over the creepy keyboards that make for such a distinct score. Voice acting has been added for the first time (at least, beyond demonic growls and babies crying), but it is very limited.

With a story made up of only a brief intro and the short descriptions of the items, the bread and butter of 'The Binding of Isaac: Afterbirth' is in its genius gameplay and replayability. Even if you don’t particularly care for Greed Mode (and I have a feeling that if you liked the base game, you will like Greed), there is still a huge amount of stuff to discover. Lilith is locked behind a moderately difficult challenge and the Keeper is behind an even tougher one, but the many items, transformations, and more make for a massive experience. Achievements are currently missing, but Edmund McMillen has tweeted that this was not intended and that Nicalis is investigating. 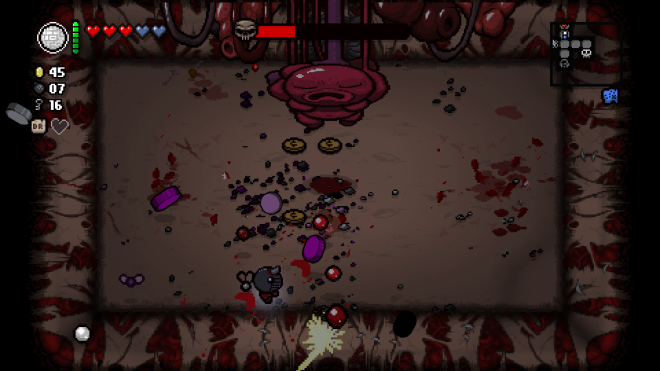 'Afterbirth' is an expensive addition when compared to its base game, but it is truly an expansion. To the right player it will provide far more entertainment than a AAA season pass typically would, and at a fraction of the price. If I thought I had a problem quitting Isaac before, I might as well stop trying now.