The Game Itself
3 Stars
The Video: Sizing Up the Picture
2.5 Stars
The Audio: Rating the Sound
3 Stars
Replay Factor
2 Stars
Bottom Line
For Fans Only

'Homefront' was released in 2011 by Kaos Studios and THQ. Kaos as a company did not survive the dissolution of THQ, and the intellectual property was purchased at auction by Crytek. Crytek charged their UK office, formerly known as Free Radical Design, with the creation of a 'Homefront' sequel. Sadly, Crytek UK was also axed and the studio was purchased lock, stock, and barrel by Deep Silver. Now known as Dambuster Studios, the Crytek UK people have finally finished 'Homefront: Revolution'.

In the near future setting of 'Homefront', America has been invaded and occupied by the Democratic People’s Republic of Korea, which has successfully reunified the Korean peninsula. The newly minted Greater Korean Republic has been financing their aggressive foreign policy with the exportation of consumer electronics and also by making puppet states all over eastern Asia. They have turned much of the US into a squalid ghetto where civil liberties are a relic and any opposition is met with widespread execution. The campaign is set in Philadelphia, or what’s left of it after the KPA have trampled everything down. 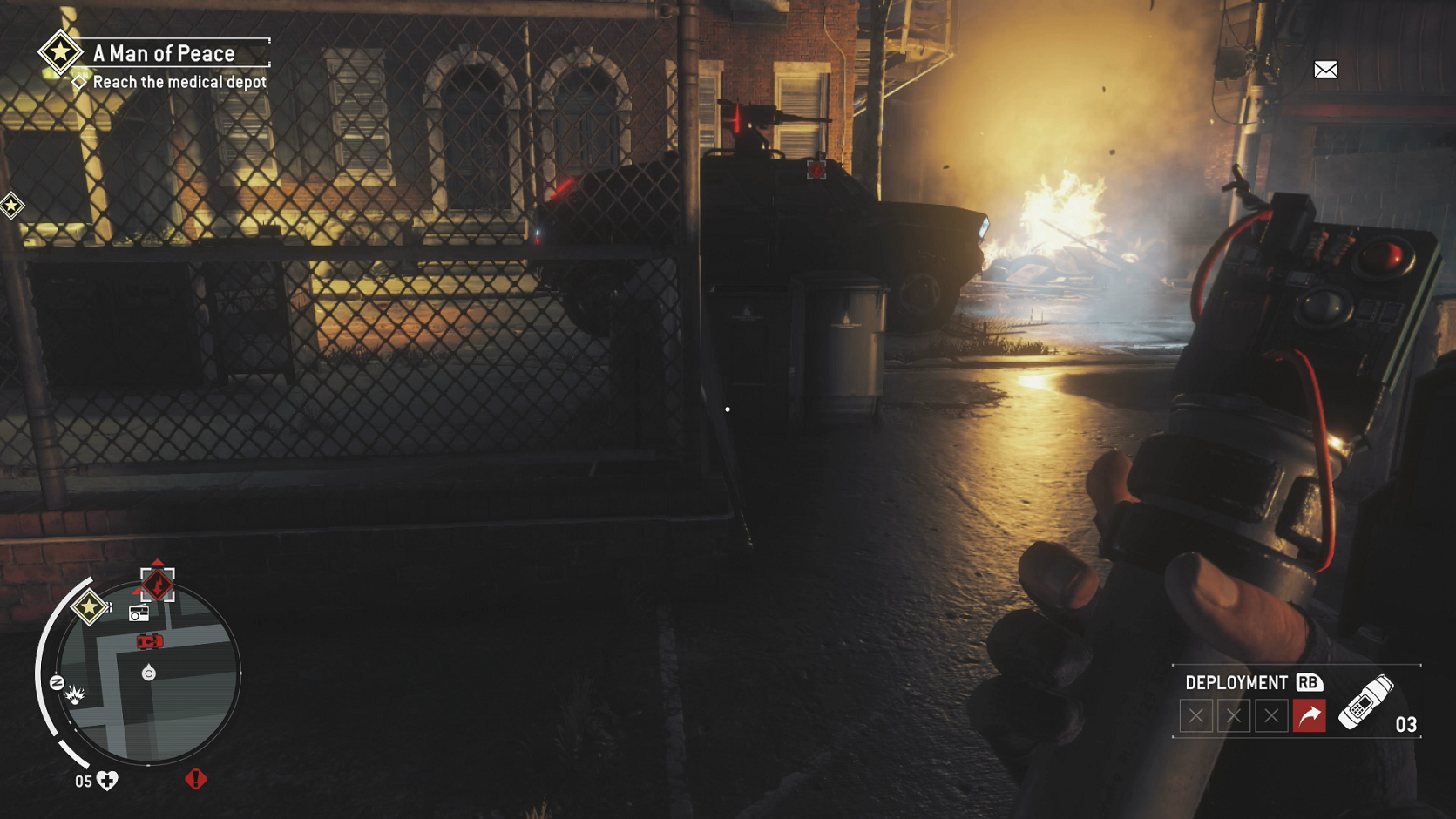 Instead of the linear experience of the first game, 'Revolution' is an open world. The districts of Philadelphia are are classified by how thick a KPA presence they have, with red being a bombed-out ruin occupied by the resistance and green being the idyllic Korean quarter. Most citizens live in the heavily patrolled yellow district. As a mute, generic resistance fighter, my job was to single-handedly fight back the KPA presence with pipe bombs, molotovs, and smuggled guns. There are stealth mechanics, like silent takedowns and firecracker distractions, but they are so unreliable that I gave up after a few missions and took my chances with rote shotgunning. It’s a shame too because I wanted to play around with a silenced pistol or perhaps SMG, sneaking around in the back alleys and hiding in dumpsters (I mean who doesn’t want to do that?), but these Korean overlords have unnaturally good vision and can apparently materialize from thin air.

The open world opportunities are a pretty authentic replica of most games that have come before it. There’s a standard checklist of base capturing and item collecting, but without the stealth options of a 'Far Cry' or the lore-riddled exploration of a 'Fallout'. I just had to use a bolt cutter on the door, shoot a few soldier dudes, grab a laptop, and that was it. One base invasion took all of three minutes, and there were only a half-dozen or so in that district. The enemies have a weak AI that mostly consists of moving towards the player - they rarely flanked to flush me out of cover or use the terrain to their advantage.

The revolutionary story behind all of this is decently written but very familiar. It conveys patriotism while mostly avoiding the pitfalls of jingoism or cheap satire, and the invaders are portrayed as cunning adversaries at least as often as a vague yellow terror (even if the soldier AI has trouble keeping up with the cunning part). Unfortunately, the cutscenes don’t evolve beyond the stock "walk really fast with the protagonist somewhere and explain the next mission while also trading barbs with each other" mentality. It never caught me up in the revolutionary spirit or made me care about any of these people. One of the higher-ups in the revolution, Doc Burnett, is so anti-revolutionary that he might as well be a Korean sympathizer. His messages to me came off as more naggy than conflicted, quickly fizzling out one of the few interesting plotlines. The other characters are sometimes entertaining but have a tendency to be one-sided, and they love spamming my in-game cell with texts after every mission. 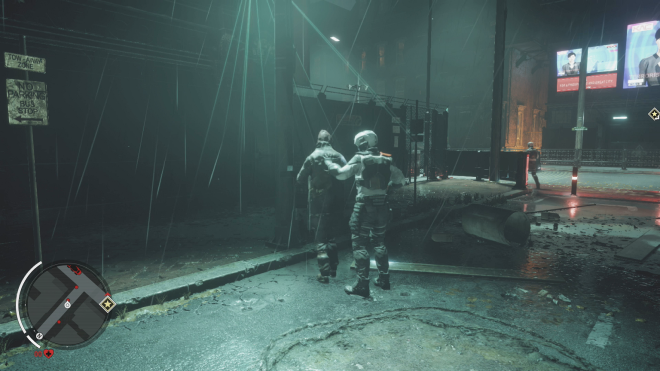 'Homefront: Revolution' makes use of the capable CryEngine, but any advances in the visuals are offset by the choppy performance and long load times. Stutters are frequent and tedious, most notably when autosaving but also for just about any other occasion. Bugs of all stripes rear their ugly heads during gameplay, like oddly animated characters, weapon models not loading in, late pop-in, and so forth. The gun customization system is a bright spot. It streamlines the bulky arsenals of other shooters into a modular setup where barrels, scopes, and other attachments can be swapped around on the fly. 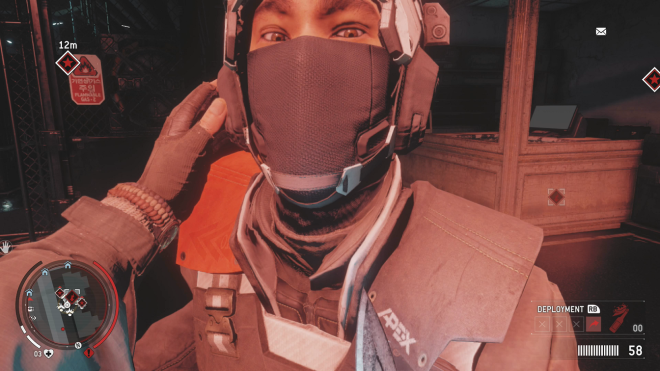 For the most part the sound in 'Homefront: Revolution' is serviceable, and not much more than that. The voice acting is sometimes overdone and there are syncing issues with the character models. The propaganda broadcasts from both sides are great, however.

Playing second fiddle to the ho-hum campaign is the Resistance co-op mode. It’s pretty dry, I’ll be honest. Four players join up to kill some KPA soldiers, occasionally sprinting to another area on the map and then killing more soldiers. Enemies swarm the map in such great numbers that even on easy we were quickly overwhelmed; there’s a fine line between a challenge and a massacre. The devs mentioned that they were shooting for a 'Dark Souls' level of difficulty. It has that, but without the great character development system or sense of gratification. If you want a great co-op mode with abusive difficulty, there are far more interesting places to find it. 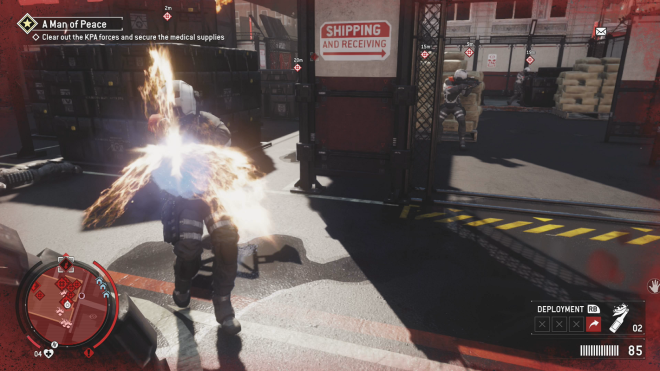 I could see myself enjoying 'Homefront: Revolution' briefly in a few years when I’ve managed to get through everything else in my backlog, itself a tall order. It has an adequate but not quite good campaign, easily skippable co-op, and some serious engine problems. It’s your thoroughly average shooter, in a nutshell.