Generations ago, the world of Alefgard was plunged into darkness and humanity lost its ability to rebuild, leaving the world in ruins. In 'Dragon Quest Builders', the player takes up the mantle of The Builder, a hero spoken about in prophecy who can restore peace to the world and teach people to create once again. In this block-based open-world town building RPG, players can reshape the world however they wish, save humanity from extinction, and bring back light to Alefgard.

'Dragon Quest Builders', a game that blends 'Dragon Quest' with the ideas of 'Minecraft', one of gaming's biggest success stories, is the kind of easy money idea that could've worked with next to no effort. 'Minecraft' is a worldwide phenomenon, and 'DQ' is Japan's biggest franchise. 'Builders', in Japan at least, could've been a simple reskin mod sold at full price and it still would have sold extremely well. Ultimately, 'Builders' aims so much higher than it ever needed to, and that's why it's such a wonderful time.

'Builders' is set after the very first entry in the franchise. In that game, players were given a choice by the game's central villain to either try and defeat him, or join forces, giving the hero control of half of the world. In that game, going for the evil option simply lead to a black screen and a game over, but in 'Builders', we see the full result of the hero's choice. 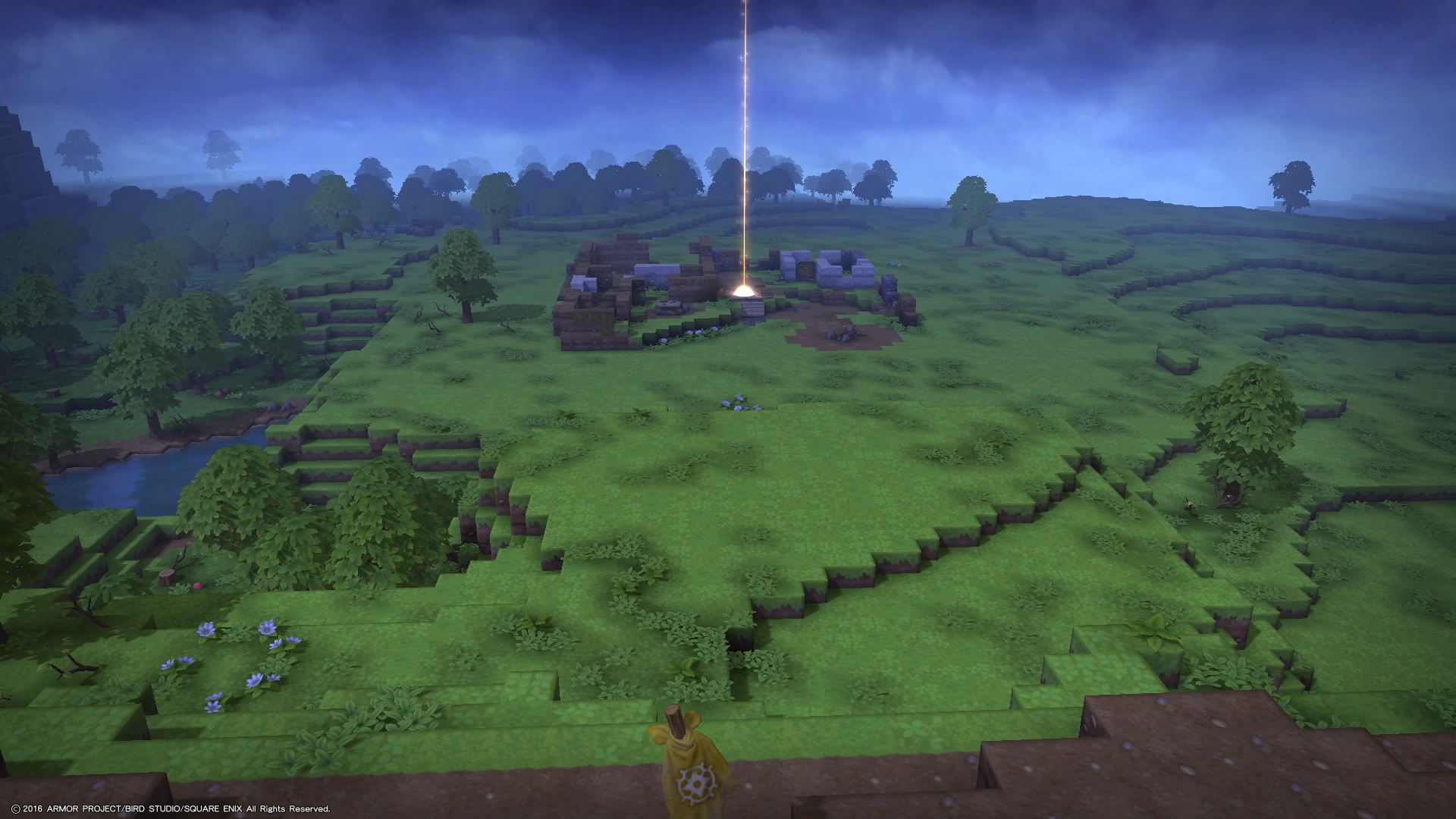 The world has fallen into ruin with a darkness covering everything. Cities are completely destroyed and mankind loses the ability to create anything, giving them no chance to rebuild. In fact, by the time the main character enters the game, nobody even knows the meaning of the word "build", having been reduced to nothing more than scavengers. The main character, simply called "The Builder" wakes up in a cave with no memory, a guiding light telling them to bring back the light and teach humanity how to create once more. It's such a delightful setup for a game that scarcely needed one. All of the ruined towns the player must rebuild and most of the fields that must be visited are ripped straight from a game released 30 years ago. It adds a cute layer of context and nostalgia to everything, and gives The Builder's quest a fair bit more importance.

As much as I tried, I could never really get into 'Minecraft' simply because of how it starts players off without a hint of guidance, just setting people lose and leaving them to their own devices. It's an approach I deeply respect, but I'm not creative enough to really get much mileage out of that or find it terribly compelling, it just ends up overwhelming me. 'Builders' offers an unlockable infinite mode, but largely relies on heavily structured campaigns that I greatly enjoyed. Within minutes, The Builder finds the town of Cantlin, sets up a beacon and restores light to it, and establishing it as a base camp. Soon enough, residents show up, almost all of whom have requests to take that involve things like building certain types of rooms or finding specific materials. This serves as both a shockingly compelling structure for the game that kept me playing for hours at a time, but also a terrific tutorial for the game's mechanics that never feels overbearing. It teaches the basic principles of making a room (all the walls need to be two blocks high, and each room must have a light source), details each room type's effects, and gradually introduces the player to the hundreds upon hundreds of recipes they can discover in a way that never feels slow, but never overwhelms, either. 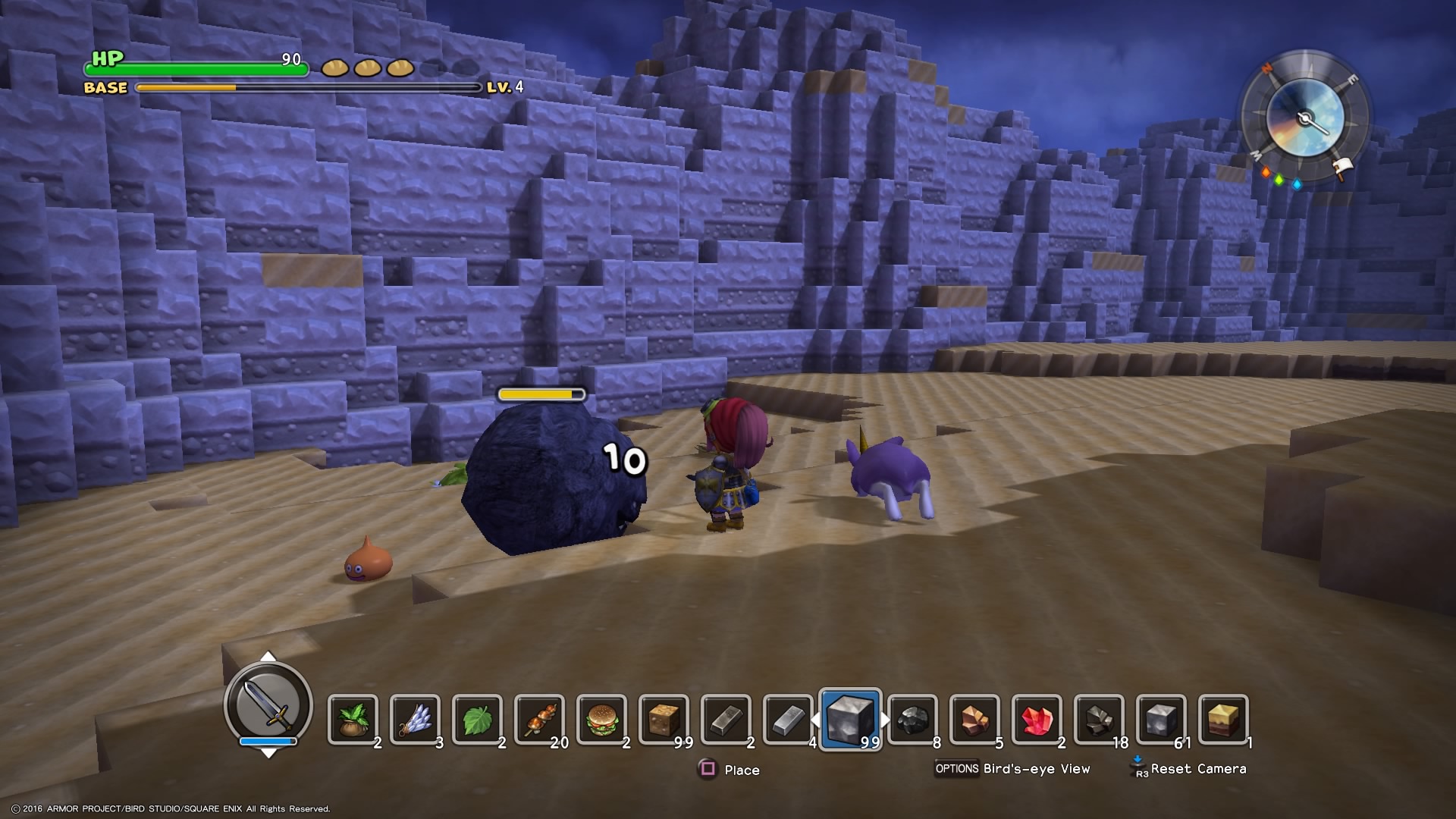 Learning the ins and outs of building a successful town makes the game feel far less like 'Minecraft' and more like a more intimate take on the SNES classic 'ActRaiser', a town building RPG where the player had to fulfill the needs of the people and ensure things keep running smoothly. Keep building the towns up, and the villagers will eventually begin to make use of any facilities that have been set up, doing things like cooking for the player, making medicine, or equipping themselves with better weapons and armor to defend against monster attacks. From chapter to chapter, the towns I built grew gradually more elaborate, from Spartan huts and bedrooms that were just a mess of straw mattresses, to heavily decorated buildings with machinery, a working infirmary, and even public baths. Though 'Builders' is light on the RPG elements, relegating stat upgrades strictly to finding better equipment and consuming items that increase maximum HP, (there's also a town level, but it doesn't do much outside of indicating how happy townspeople are) there's a lovely sense of progression to everything.

There are a few small issues that make 'Builders' feel like a first draft in places. The controls are occasionally a little stiff, and seem to have been designed around Vita play, making it feel odd on PS4. The camera, which usually uses a fairly zoomed out perspective, has issues with smaller indoor environments, as I sadly discovered after spending 20 minutes building a roof for the buildings in one of my towns. When making new items, there's no way to build specific quantities, only being able to build the minimum number of something (thankfully, when it comes to things like bricks, ten or so are usually made at once by default) or using all available materials to make the maximum possible at that time, which is a huge pain. The combat, too, feels like a bit of an afterthought at times, utilizing extremely basic hack and slash gameplay, I often had difficulty judging if I was close enough to an enemy to actually hit them with my sword, and either ended up slashing the air or hurting myself by running too close a lot of the time. None of this really hurts the game all that much, but it definitely could stand to be improved for a second entry. Still, everything else here works so well that these issues just feel like small gripes about a tremendous package overall. 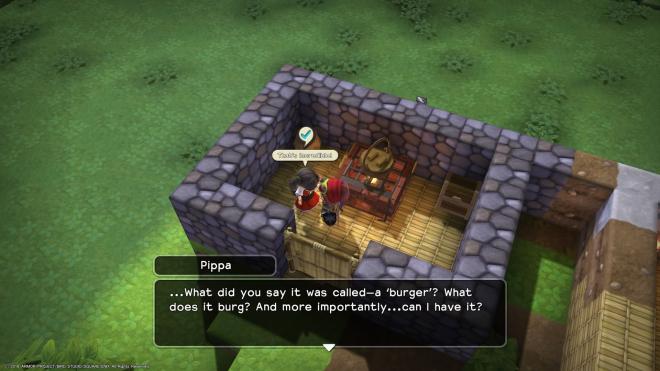 The blocky aesthetic actually suits 'Dragon Quest' rather well, often leaving the world feeling like a literal 3D translation of an old NES RPG, which was no doubt the intent. Akira Toriyama's character and monster designs are as solid as ever, and the cartoony art direction definitely works in the games favor. It's no technical marvel, and some of the animations look a little stiff, but it gets the job done. 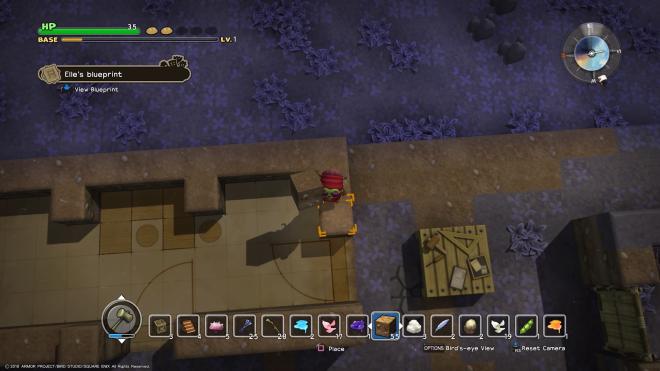 Koichi Sugiyama's orchestral score is upbeat and peppy, and while the game borrows music fairly heavily from other entries in the series, it's still an extremely pleasant accompaniment that helps the game feel incredibly relaxing. Still, with no voice acting to speak of and fairly unremarkable sound design overall, it's the kind of game that I found myself playing while listening to podcasts.

'Builders' is essentially endless, for those with a knack for creation. Simply reaching the end of each chapter will take around 40 to 50 hours, but finishing all the optional challenges can greatly extend the campaign's lifespan. Additionally, an infinite mode that most heavily utilizes the structure of 'Minecraft' and does away with the campaign's structure is unlocked fairly early on, keeping the game going for a long, long time after the credits have been reached. 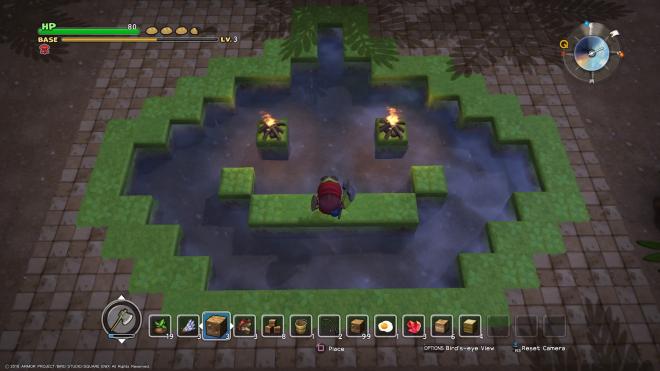 Marrying the best ideas from 'Minecraft' with the structure and charm of 'Dragon Quest', 'Builders' had its work cut out for it from the start. The team behind it, however, have gone the extra mile in developing a game that feels wholly unique and endlessly endearing. It's by no means perfect, and has ideas that could stand to be improved upon when the game eventually gets a sequel, but what could've ended up as a cynical cash in has instead wound up as one of 2016's most interesting games.