The Game Itself
3.5 Stars
The Video: Sizing Up the Picture
4.5 Stars
The Audio: Rating the Sound
3.5 Stars
Replay Factor
4 Stars
Bottom Line
Worth a Look

Vanillaware's 'Grand Knights History' was Tomohiko Deguchi's debut as a director. While the PSP role-playing game only saw release in Japan, it still managed to make some waves due to its gorgeous artwork and focus on online play, which is uncommon for the genre. Thankfully, the intriguing title's spiritual successor 'Grand Kingdom' has received a worldwide release, so gamers all over will be able to play Deguchi's latest attempt at an RPG.

'Grand Kingdom' has a pretty ho-hum premise for an RPG, as it immediately casts the player as the leader of a mercenary group that provides its services to the highest bidder. Sure, it's hardly original, but it does a solid job of setting up the endless amount of battles that follow. While the story isn't gripping from the start, the gameplay certainly makes up for it.

A lot of the fun in 'Grand Kingdom' comes in the form of getting to make my own group of mercenaries. There are over 15 classes to choose from, each with their own abilities, but they mostly break down into three categories: melee, ranged, and magic. Since a group is composed of four members, I chose one of each type and a healer to round them out. I found diversifying to be a good strategy, and I largely kept this group intact.

The battles that make up the bulk of 'Grand Kingdom's gameplay will feel familiar to tactical RPG veterans, but I quickly found out that there was plenty of nuance to learn. Even something as simple as moving characters around the battlefield has hidden depth to it. In this regard the game is akin to a 2D version of 'Valkyria Chronicles,' where players are given complete freedom of movement, but every step drains a stamina meter. I quickly learned that I had to plan my attack ahead of time, and not just figure it out as I went along since I was only wasting energy if I backtracked. 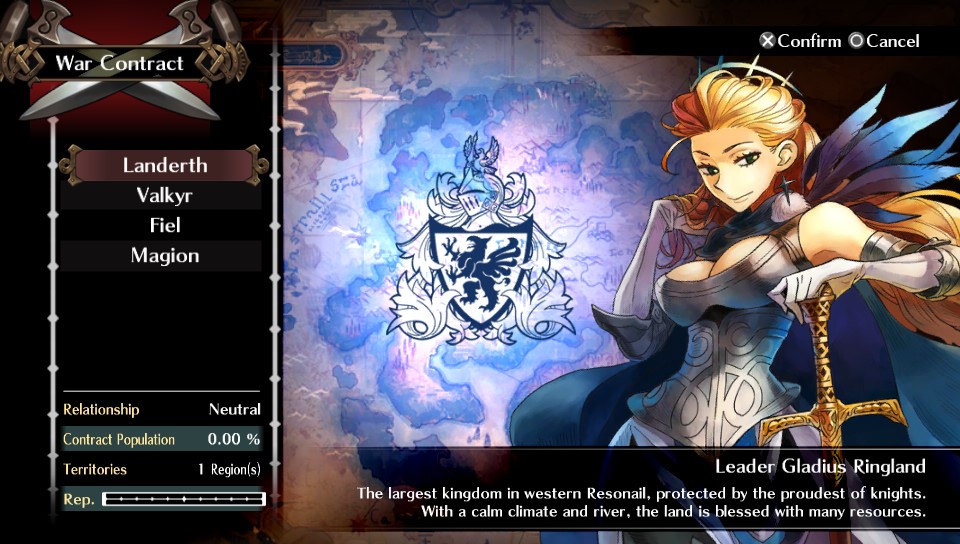 Another interesting aspect of 'Grand Kingdom's turn-based gameplay is that it has a large focus on positioning. There are three different rows for characters to move around on, and the spacing certainly matters. This is because it's dangerous to have the entire group in one area as one powerful attack can wipe out the entire team (I sadly found this out first-hand). Spacing is incredibly important in order to achieve victory, and I spent a lot of time designing my starting formation where I put down obstacles (such as barricades) in order to force aggressive enemies to get into a single lane.

Here's how one such battle went down:

I began the battle with a plan to target the opposing team's leader, a spellcaster who sat atop a wall. Not only are the leaders typically the most powerful enemies, but their squads' stats are negatively affected once the commander is taken out. I started off by using my own mage, and used ranged magic to hit the enemy leader. It didn't do much damage, but it irked the A.I. enough to make her get down from her high ground and start charging a powerful attack. Since the leader was now vulnerable, I sent my melee-focused character in for the kill. After a series of hammer strikes, the enemy leader went down. With her team was demoralized, I was able to quickly finish off the two archers and the medic who had been left to fend for themselves.

One of 'Grand Kingdom's biggest strengths is in how diverse its mission design is. This is seen mostly in the side-missions, as the story typically tasks the player to simply get to a designated area. My favorite mission type was one where I had to defend an area from enemies, and would fail if they entered the area. There are several other different types of excursions including fetch quests, but this seemed like a fun way to use the in-game map to its advantage.

It's not often that a Japanese role-playing game has online play, so I was initially very interested in checking out the game's War mode. Within this mode, players participate in wars between nations, and the combatants are a made up of mercenaries that were sent by other players. I thought it was pretty cool to get to see how other players set up their teams, but ultimately I was still battling the same computer A.I. that I faced in other modes. It doesn't feel different enough, and the draw needed to pull me back in is missing. 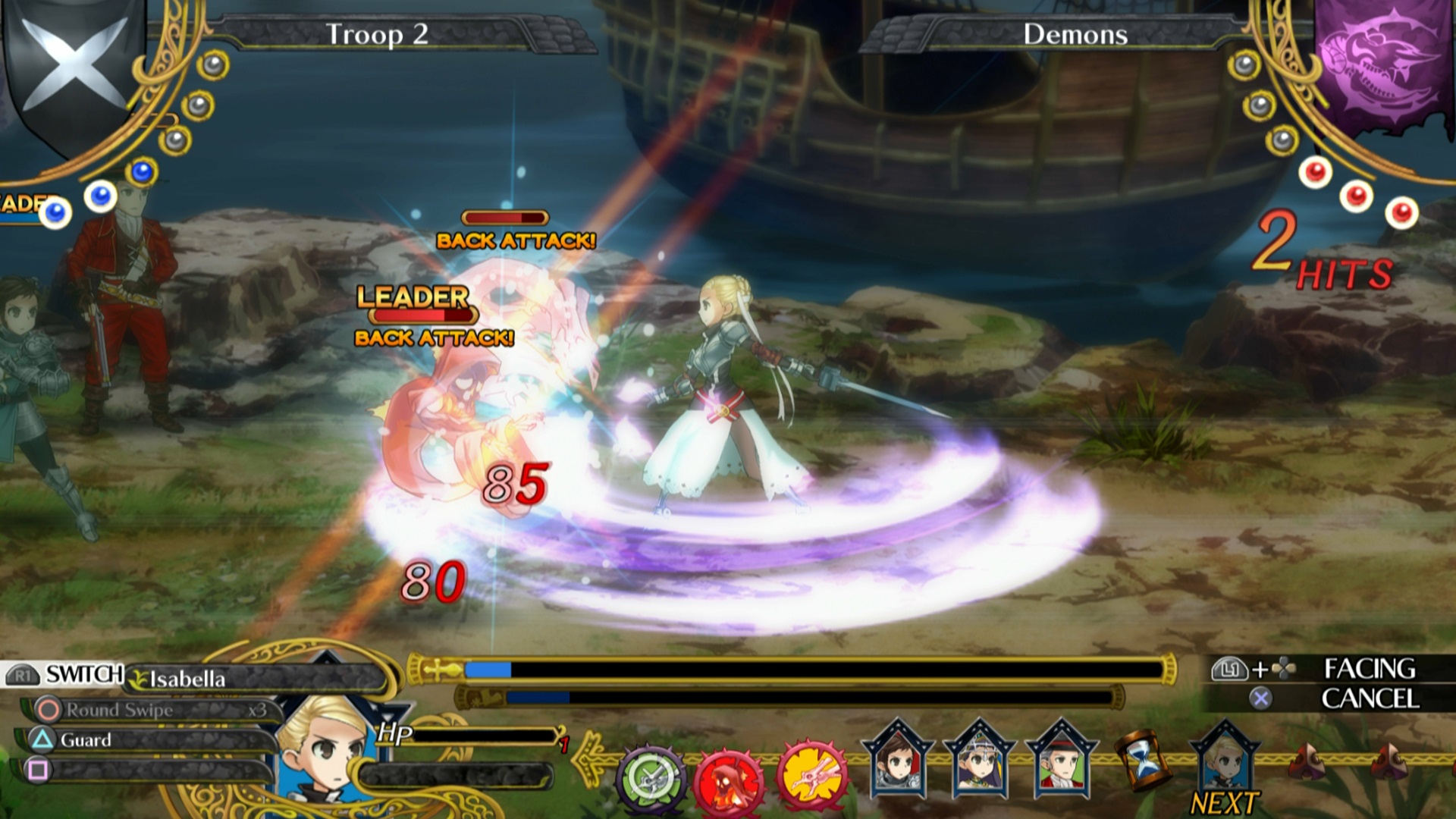 While I had some fun to be had in 'Grand Kingdom's online play, I certainly didn't find it more captivating than playing offline. It's also disappointing that there isn't any direct multiplayer as players could learn strategies from other competitors that way, and it'd make for a more compelling package. Even if it's not a huge success on this front, it's still great to see a developer trying to do something new, and I'm glad Monochrome is trying to make an RPG with a substantial online mode.

'Grand Kingdom' largely succeeds by doing something unique in its gameplay, but it also unfortunately falters in the same areas where a lot of RPGs do. As someone who typically likes to mainline the story in games, I was disappointed when I quickly became underleveled since I was doing every sidequest at my disposal. The level gap eventually got to a point where it was insurmountable, and I was forced to grind away in order to be competitive. That's a huge bummer, and it makes little sense from a narrative perspective that my squad would waste days going on random excursions while pressing story issues were ignored.

Another bummer is that players can't save during a mission, and if you fail a single battle you have to restart from the very beginning. While thankfully characters don't lose experience points when they die, it's beyond frustrating to get to the very end of a level only to wipe. I had this happen multiple times, and sometimes it felt like the deaths were unfair (such as having to fight multiple battles back-to-back without being able to save). It's not enough to ruin the experience, but it adds a lot of frustration to what's typically a lot of fun. 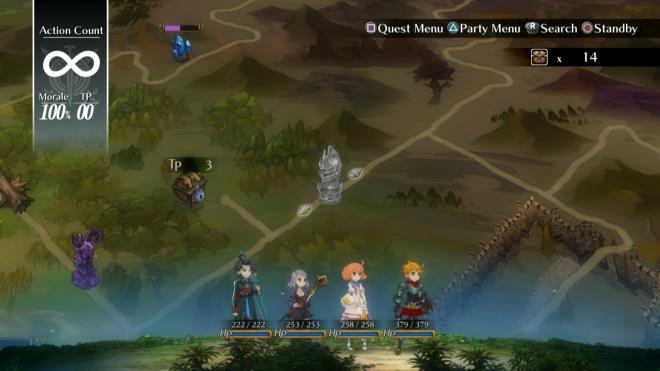 Tomohiko Deguchi might not be at Vanillaware anymore, but one might mistake 'Grand Kingdom' as being a game by George Kamitani's studio. While it takes place in a pretty standard fantasy setting, there is enough graphical flourish here to keep it from getting dull. This is largely due to the gorgeous watercolor art style the game employs. I found it to be simply a joy to look at, and found that it becomes something really special when coupled with the title's top-notch animation.

While I was enamored with 'Grand Kingdom's visuals, the same can't be said for its soundtrack. That's not to say that it has bad music, since that'd be untrue, but it rarely stood out while playing. Most of its songs are upbeat tunes that you'd expect from a fantasy game, and it just feels a tad bit generic.

The rest of the audio package is strong, though. There is full voice acting for the game's story missions (but not much elsewhere), and the actors did a good job at bringing their characters to life. Sound effects are another strong point, as the clashing of swords sound great during combat.

There is plenty of content to be found in 'Grand Kingdom,' and that's best demonstrated by the game just really starting once you finish the story. After the campaign is completed, players can then replay it from the perspectives of the four nations involved. Each of these additional campaigns are nine chapters long, so that adds up to being 36 additional stages to play through.

Besides the story content, there are also the typical hooks that most RPGs have. I always had characters that I wanted to level up, weapons I couldn't craft yet, and rare classes to obtain. These aspects are well-fleshed out, and 'Grand Kingdom' is a game that I'll likely keep coming back to as the year goes on even if it can be infuriating at times.

One of my common gripes about role-playing games is that the genre has largely been stagnant. Too many games rely on the same concepts and mechanics that fans have seen for decades. That's what makes 'Grand Kingdom' feel so refreshing. Sure, Monochrome's debut has its fair share of flaws, but it also offers up a unique brand of gameplay that really isn't found elsewhere. If you're looking for a role-playing game that is trying to do something different, and innovative with online play, then this is certainly worth checking out.