The Game Itself
4 Stars
The Video: Sizing Up the Picture
3.5 Stars
The Audio: Rating the Sound
3.5 Stars
Replay Factor
4 Stars
Bottom Line
Recommended

Misfits Attic was founded in 2011 by Tim and Holly Keenan, and has previously released 'A Virus Named TOM' for PC and Vita. The release of 'Duskers' follows nine months of early access. Based off of the few weeks that have passed since the release, Misfits Attic is cotinuing to respond to feedback and update the game.

I pilot Holly down the narrow hallway, carefully stopping every few feet to scan her surroundings for red or purple hitboxes - the telltale sign of an infested lifeform. This room is empty except for some scrap, as was the one before it. As I move Holly manually, I tap in some commands for her colleagues to move to different rooms and power up generators or wait for the next pile of salvage to haul in. When we need to explore a new room and I don’t have a motion detector handy, I activate her stealth field and we go in quickly and quietly to search for goodies and baddies. Sadly, in this particular room my stealth field malfunctions, which is unsurprising as it had been on the fritz for some time. Panicking, I roll Holly out of there, trying unsuccessfully to avoid projectiles and close doors behind me to wall off the creature. Though she is damaged, she can still set up a lure before bailing, enticing the creature to come in and investigate. I then use Aaron to reroute power behind the monster and blow the airlock, instantly killing it and flooding the room with radiation. We’re safe...until the next room, maybe. 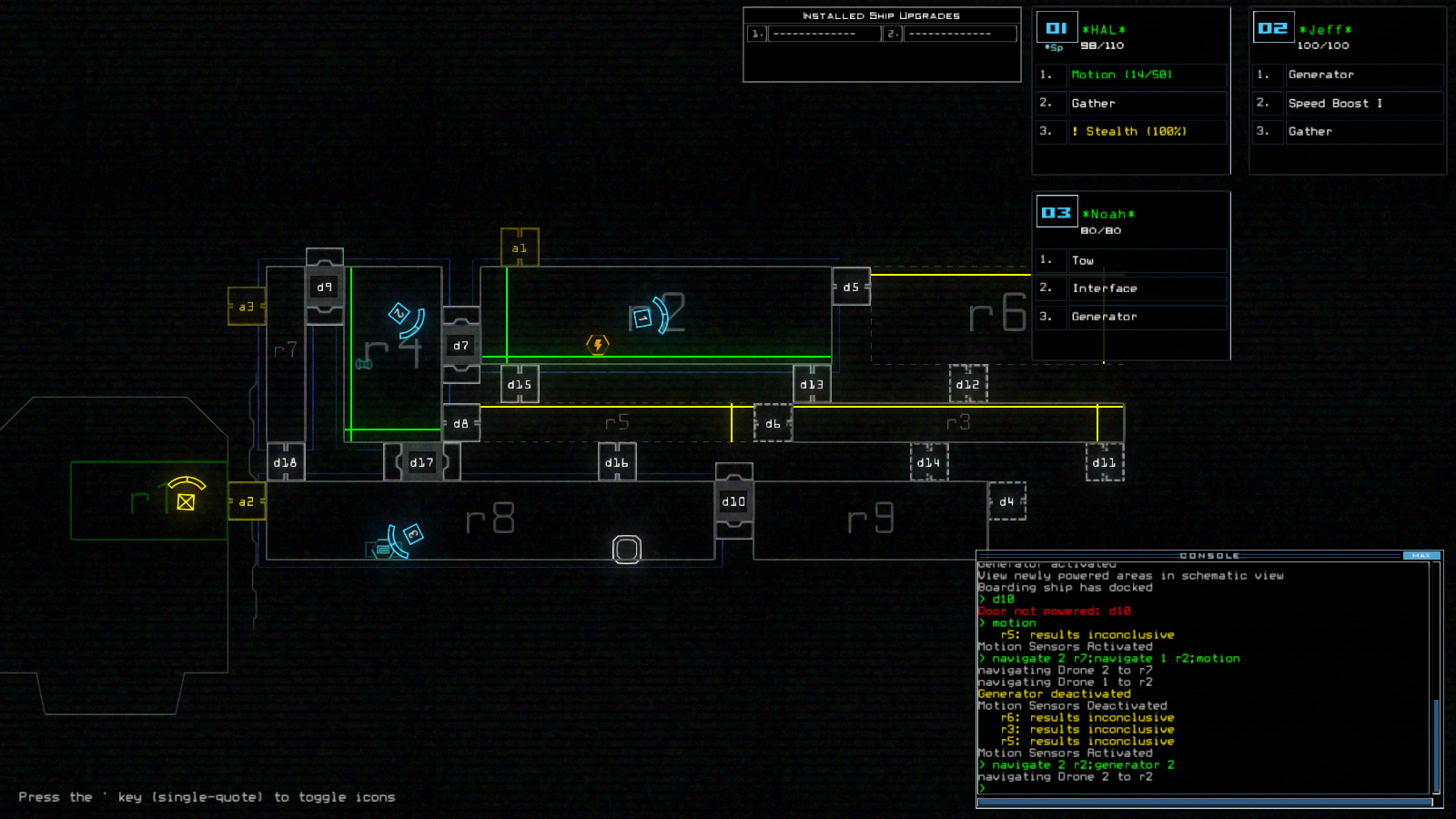 In 'Duskers', my little team of drones and I may be all that is left of civilization. We fly from one abandoned ship to another, picking up scrap and fuel and converting it into upgrades and repairs. Each drone can have 3 abilities, from simple things like "gather" to sexier stuff like "turret" and "trap mine". Arranged correctly, the drones’ abilities allow them to move efficiently through each ship, walling off rooms to herd monsters into certain areas for quarantine or destruction. Once clear, the upgrades and scrap in that room can be safely harvested, and then we move onto the next like a cybernetic plague of locusts.

At least one of the drones must be on generator duty, plugged into a static power inlet to provide electricity for part of the ship. This drone rarely moves but has the most important job: powering the doors and airlocks that control the movement of everything on board. The entryways must be carefully managed to ensure a safe flow from the explored rooms back to my ship, and if there is a breach, the situation can quickly go to hell in a handbasket. Monsters aren’t that smart, but they are tenacious and will relentlessly pursue any drone in sight. My robot buddies have a handful of clever devices to protect themselves, from mobile turrets to lures and even the ship itself. Some rooms have vents that allow the aliens to move between them (scary), but others have airlocks that serve as disposable bombs.

'Duskers' is a real-time game, but its command-line interface sets a more deliberate tone. Not unlike old-fashioned systems like DOS, the vast majority of instructions to the drones are delivered via typing out specific commands. So to move my exploration drone from the ship to room 13, past two closed doors, then gather all equipment in the room and activate his motion detector, I type out "navigate 1 r13;d5;d3;gather all;motion". Being completely uninitiated with command-line stuff in real life, the console was confusing at first. The matter-of-fact tutorial of 'Duskers', along with its unforgiving difficulty, taught me very quickly. Commands can be bundled together with semicolons, even for multiple drones, so after thirty seconds of typing my servants can carry out a huge cluster of orders, buzzing around the ship and stealing things, setting up traps, and collecting supplies while I watch vigilantly from the wireframe map, ready to intervene at a moment’s notice if we are attacked. 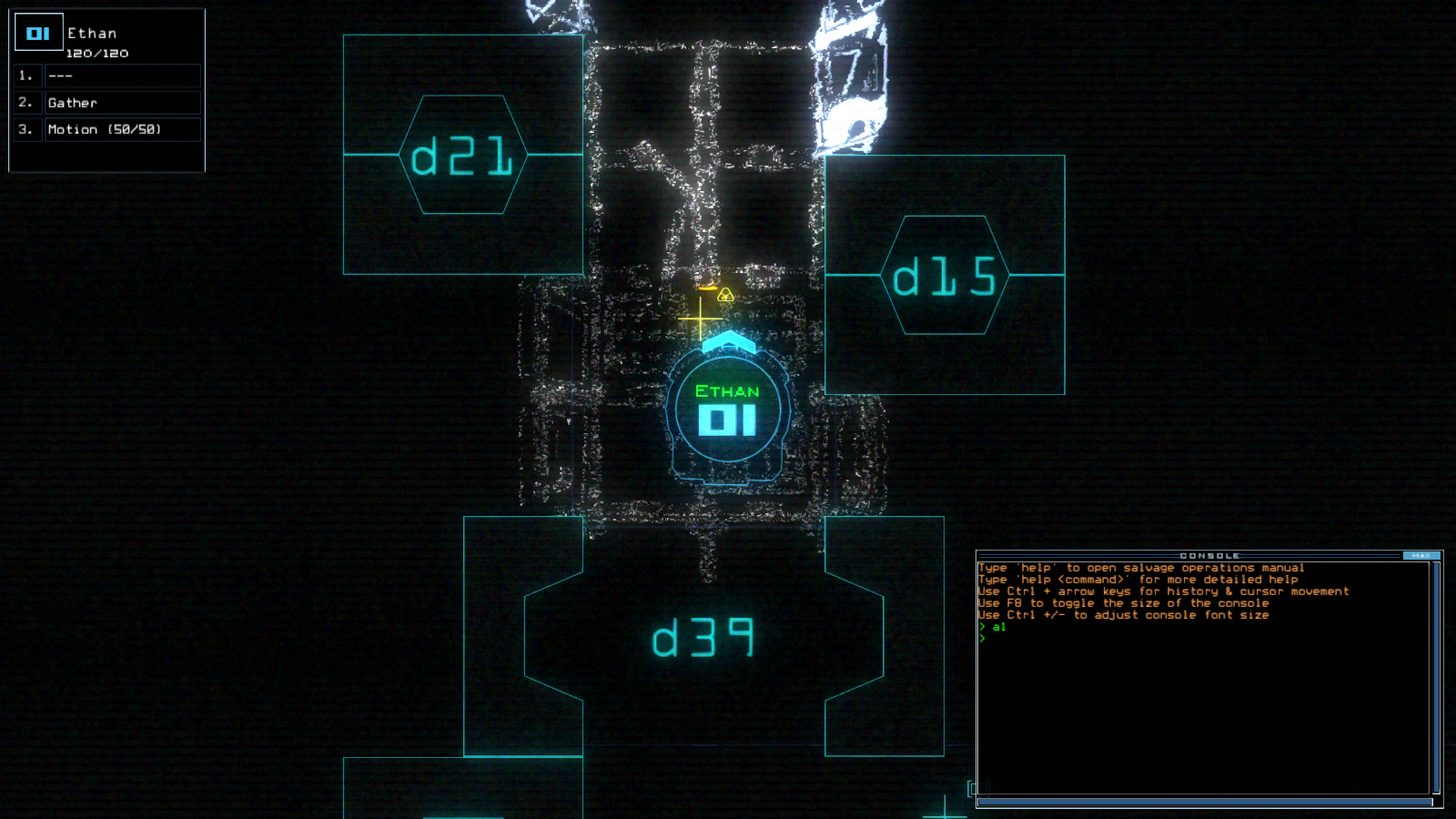 'Duskers' has permadeath, slowly degrading resources, and procedurally generated environments, all hallmarks of a good roguelike. The sudden appearance of a creature can be unsettling, even if it’s just a mess of purple pixels in the objective lenses of the drone’s camera. It means that I only have a few seconds to get my drone out of harm’s way, all while simultaneously moving the drone and typing in commands. So while it’s not explicitly scary, it is tense and even unnerving. I very much want to live and get off this ship with my swag, and losing even one drone can permanently sabotage my run and require a restart. The difficulty settings are modular and comprehensive, but I still feel like 'Duskers' focuses too much on the restart as a game mechanic. Then again, most roguelikes are often a sophisticated form of gambling, where every level can mean the difference between a sweet upgrade and a crushing game over. In 'Duskers' those game overs just happen to occur very often, at least until the drones can find better upgrades to defend themselves. It doesn’t help that the proliferating difficulty level carries over between runs, although that particular setting can also be disabled.

The story of 'Duskers' is minimal, conveyed only in garbled text logs found onboard the ships. The protagonist is presumably a human drone operator with his own ship but who never speaks or provides any opinions on the state of the galaxy. The drones are distinguished only by their names, shapes and the colors of their lights, and their communication is limited to chirps and squeaks. The simple plot is ominous and the lack of any human characters makes it a surreal, forbidding environment, not unlike 'The Fall' or 'SOMA', other sharp indie titles with a similar ambiance. 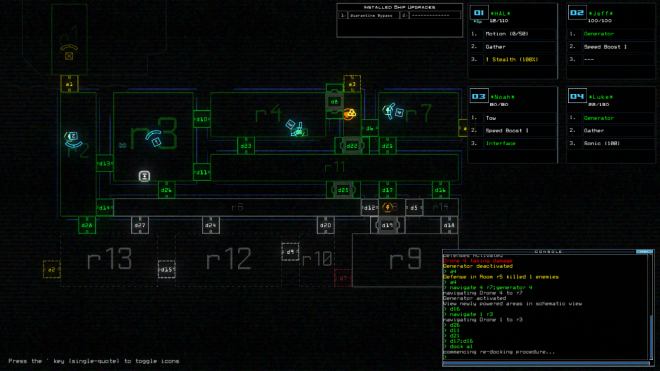 The wireframe map is by far where I spent most of my time. Dropping into drone view has its uses, but is also extremely small and can barely register aliens before they are in aggro range. Slow and steady wins this race, by using the map to gradually whittle down the location of bad guys and then disposing of them with traps. Besides the map, distorted drone cams, and huge text menus, there is little else to look at in 'Duskers', and it’s all the better for it. 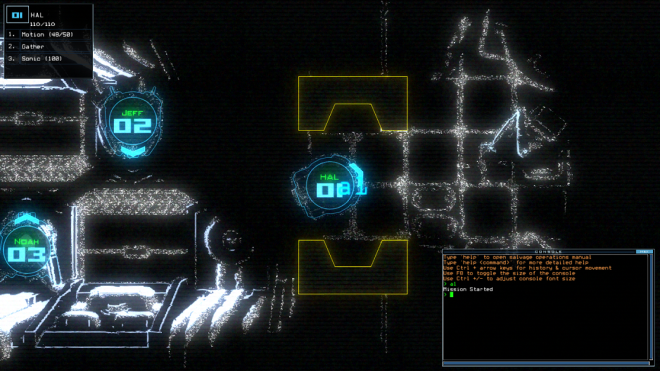 The game’s audio is even more spartan. The game is silent except for the occasional warble of the drones or an alarm indicating enemy activity. There is no music, no voice acting, and no sound effects beyond beeps and clicks.

Being procedurally generated and with engrossing gameplay, each playthrough has the capacity for hours of quiet drone enjoyment (although in my case, perhaps minutes is more accurate). The devs recommend default settings for a more immersive, painful experience, but tweaking even one or two of them can dramatically slow aggravation while still providing rewarding strategy. It’s the kind of game I can see myself playing in short- to medium-length stretches for a long time, especially once my drones have mastered their gadgets and we’re starting to kick ass instead of just getting steamrolled by a single infestation. 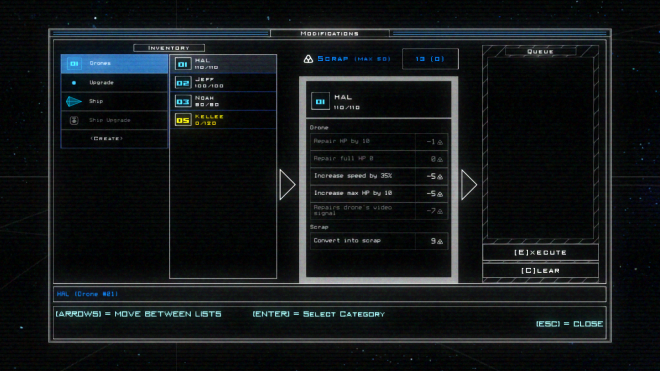 'Duskers' is an excellent game for scratching that obsessive roguelike itch. It’s minimalist and tough as nails with a peculiar interface, but as it turns out, successfully crushing all infestations on a ship with a novella of keystrokes provides a special kind of satisfaction.