While the 'Resident Evil' series originally gained success with survival horror gameplay, it's become increasingly action focused over the years. This has largely divided the fan-base, and it seems like Capcom has recognized that. Their plan is to release different types of games in order to placate each type of gamer.

'Umbrella Corps' is a frantically paced third-person shooter that looks to satisfy fans of the more recent entries. It's online play, which is the main focus of the digital-only title, features 3-on-3 team based combat. Players battle in familiar 'Resident Evil' settings in order to win rounds, and to come out victorious.

There are only two different types of modes in 'Umbrella Corps,' but they're distinctly different. One Life Match, which ended up being my favorite mode, is a single elimination team deathmatch, while Multi-Mission has two teams competing to accomplish constantly changing tasks. Both of these are formatted in rounds, and the first team to get three victories is declared the victor of a match.

No matter which mode I chose, the gameplay was pretty much the same from a base standpoint. 'Umbrella Corps' largely feels like a run-of-the-mill shooter, with the only distinct part being that the camera is slotted tightly above the character's shoulder. At first this made movement (but not aiming since it switches to first-person when the left trigger is held) feel a bit awkward, but I eventually got used to it. Control quirks aside, every level largely revolves around trying to sneak around while trying not to get spotted by enemies (since it only took a few bullets to force me to look at a death screen), and try to get the jump on foes.

Each of the seven stages (some of which have smaller variants) has a ton of zombies wandering around the area, but they're the world's friendliest foes. Capcom clearly wanted players to focus on fighting other players rather than computer-controlled enemies, but I constantly found it strange that I'd bump into a flesh-eating zombie and he would be less bothered by it than a normal person. While the undead are definitely subdued, they still can be deadly if provoked. Shooting at a zombie will cause them to become aggressive, and I quickly found out that I could agitate the undead around other players in order to kill them indirectly. 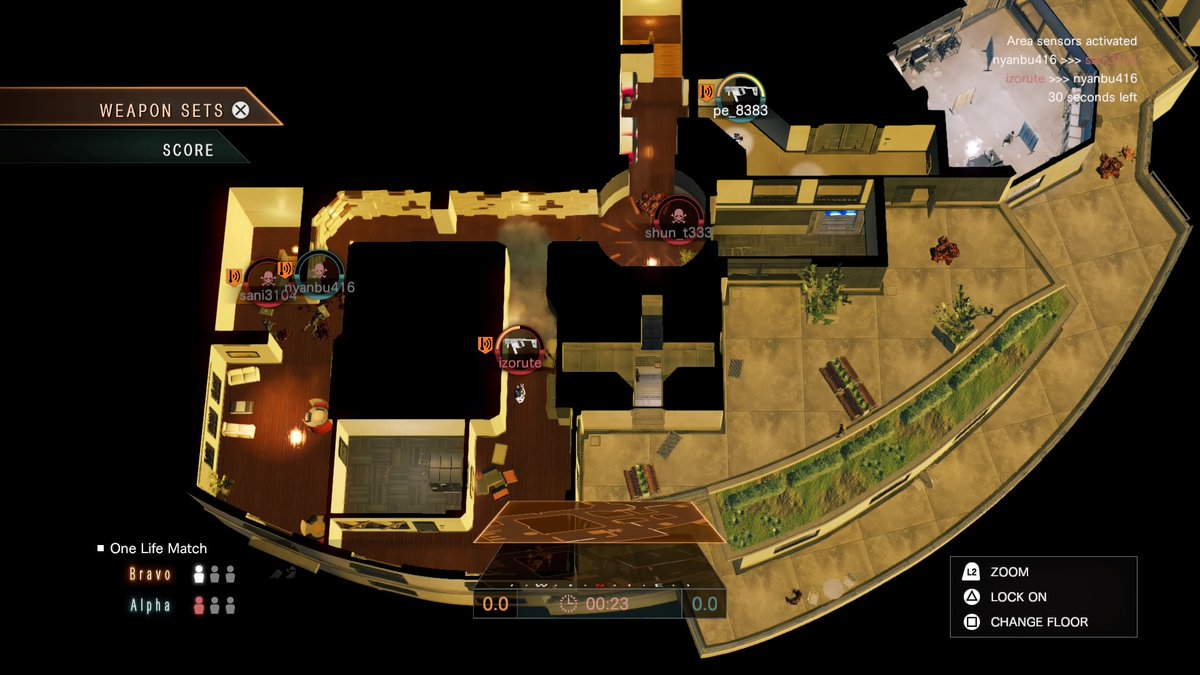 Another one of 'Umbrella Corps' unique quirks is that players move shockingly fast while in a crawling position. Since this makes players less of a target and harder to see, almost every player I saw online was constantly crawling. There's really no drawback to crawling all the time since players can still fire a gun and aim without restrictions while performing this unrealistically animated movement. It's pretty ridiculous to see (and I assume it'll get patched since I doubt this is how the game was intended to be played), but it definitely made me laugh.

The crawling isn't the only seemingly broken mechanic, as the game's melee weapon (a combat axe called a brainer) seems completely overpowered. It can take out foes in just one hit, and it led to me seemingly becoming a killing machine when I used it. I actually won an entire round for my team by myself in less than 30 seconds, as I quickly axed my way through three opponents. This should've felt satisfying, but instead it just felt like I took a cheap victory. This is largely due to how the melee attacks lock-on to enemies, and I'd see the other players move away from my attacks yet still get hit by the blow somehow. It just feels off, and it definitely isn't as satisfying as it should be.

While I don't love the gameplay in 'Umbrella Corps,' I found myself absolutely adoring the round based structure. This is due to it providing an overarching narrative to each match, not unlike a great boxing fight. One particularly memorable match was where my team quickly lost the first two rounds, and the odds were clearly stacked against us. Despite these early setbacks we were able to come together as a team and win the next two rounds. Now that it was 2-2, I figured that the fifth round would surely be the last one. Shockingly, the match ended up being a draw since both teams only had one team member left when the time had expired (each round only lasts 3 minutes). This led to an unprecedented sixth round, which we ended up losing, but the fact that the team was able to come back from a 2-0 deficit and get back to even footing was an impressive enough accomplishment that I was proud even in defeat. 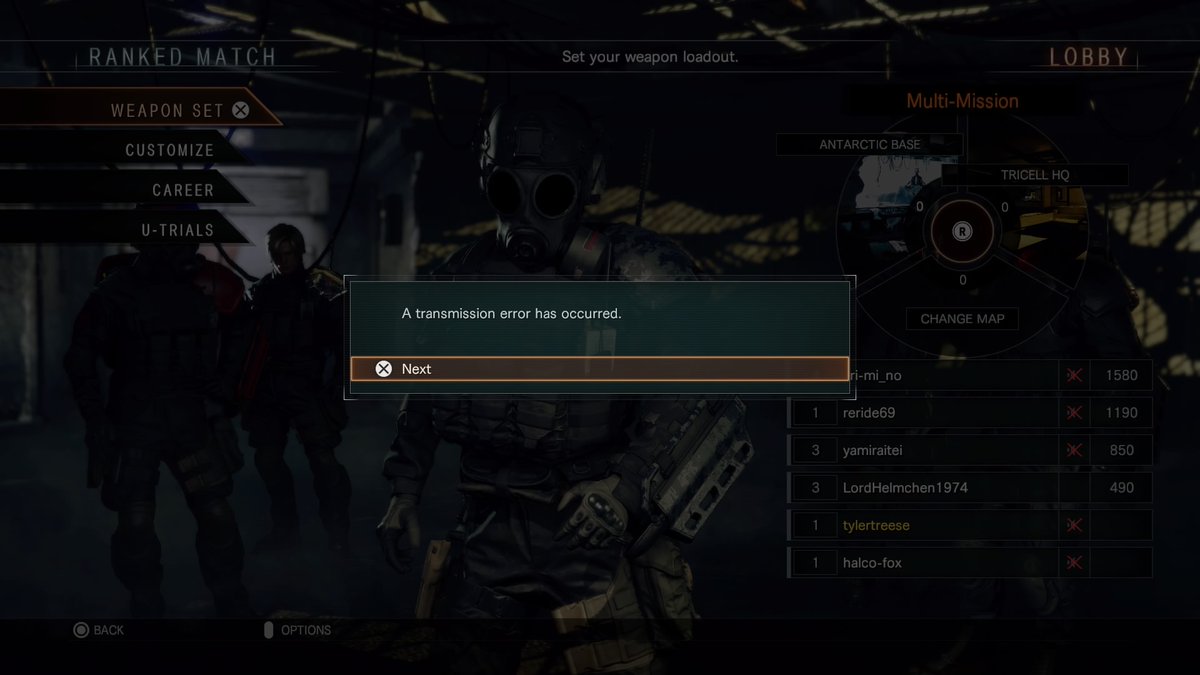 As mentioned previously, the game's Multi-Mission mode is where most of the variety will be found online. Rather than constant high-risk deathmatches, the mode rotates between eight separate objectives. These range from familiar shooter modes such as domination (where teams try to take over points of the map) to more unique ones where players compete to see who can kill the most zombies. While I enjoyed constantly jumping between mission types, I really wish these were also available in their own selectable modes. It seemed like just when I was getting into a mode, it would be over and I had no clue when I'd get to play it again. That's a bummer.

Perhaps the biggest issue 'Umbrella Corps' has is that the servers are wildly inconsistent. I spent over an hour staring at various loading screens only to be greeted with a message telling me that "a transmission error has occurred." I would've assumed that matchmaking would be quick due to the small matches with three people on each team, but often I'd be waiting several minutes to find another player. There's sometimes fun to be had in multiplayer, but sadly the servers make it harder than it should be to find it.

It's worth mentioning that there's also a single-player component to 'Umbrella Corps,' even if it's highly forgettable. It simply throws the player into multiplayer maps filled with zombies (although they're constantly agitated), and players are tasked with collecting their DNA. This is done by killing them, of course, as they politely drop a sample of their blood after they are defeated. There's really not much substance to the mode, and it grows stale awfully quickly. 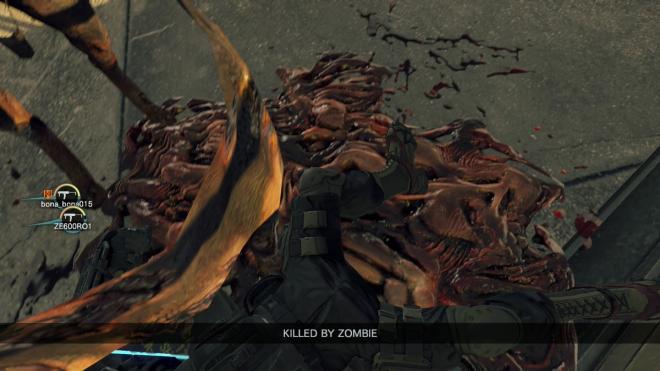 'Umbrella Corps' is simply boring to look at, which is a far cry from the atmosphere filled areas that the series is known for. The original levels (such as the police station) seem to lack any worthwhile inspiration, while the stages based off past titles (like the village from 'Resident Evil 4') just reminded me that I could be playing a better game instead. The mediocre art direction isn't helped by every playable character looking like a generic soldier (unless cosmetic DLC is purchased).

Besides the largely forgettable look of the environments, there's plenty of other issues with the visuals. Screen tearing occurs constantly running around, and the camera would often allow me to glimpse into the insides of enemy character models (which can be seen in the image above).Some pretty terrible animations (such as the ludicrously fast crawl and melee kills) are ultimately the icing on the cake of this poor looking game. 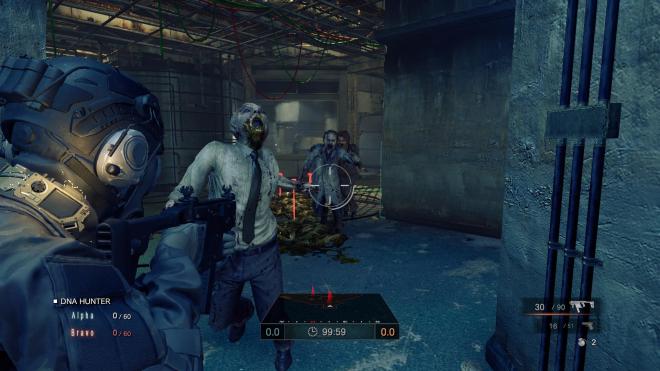 There really isn't anything noteworthy about the audio in 'Umbrella Corps,' but it probably is the game's best area just due to it not having any major faults. No music plays during gameplay, but that's alright since I'd rather be able to hear weaponry and explosions in a multiplayer match. The ambient noise allows players to pick up any sound cues (such as zombie moans and footsteps), and it provides a completely serviceable if unspectacular experience.

With there only being two types of multiplayer modes, and seven maps, there isn't much content in 'Umbrella Corps.' Sure, there's a constant feel of progression due to the game dishing out goodies every time I would level up, but it's mostly meaningless weapon colors or patches for clothing. It needs a better hook and more variety since the base gameplay isn't strong enough to keep me coming back. I saw every mode and map in about two hours, and there's really no reason to keep coming back since it's not much fun. 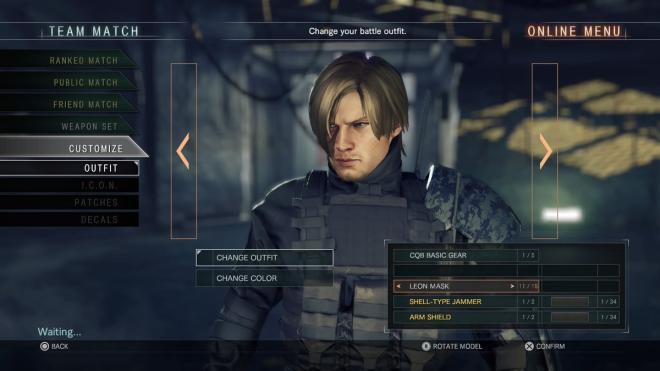 The $14.99 'Umbrella Corps Upgrade Pack,' which is included in the $39.99 'Deluxe Edition,' comes with a bunch of cosmetic items (such as patches which can place on character's armor), and a couple additional weapons (a main weapon and handgun which are both max leveled). The biggest selling point is probably the ability to play as classic 'Resident Evil' characters such as Chris Redfield, Leon Kennedy, and Albert Wesker (although strangely there's no female protagonists). Sadly, these aren't even full character skins, but rather just masks that replace the head on the default character. Thus, when I equipped the Leon skin, it looked more like my avatar was wearing a skin suit made out of 'Resident Evil 4's hero, instead of actually looking like him.

The regular selection of handguns, assault rifles and shotguns do a good enough job in combat, so the DLC weapons don't really stick out. Since these paid guns are already level 20, I didn't even get the added sense of accomplishment of levelling them up. There really is no reason to spend the extra money here.

The general lack of polish and content makes 'Umbrella Corps' highly disappointing. There are rare moments where the round-based gameplay really shines, but it just doesn't happen often enough to make up for the title's many other shortcomings. Similar thrills can be had in recent releases such as 'Overwatch' and 'DOOM,' so there's no shortage of superior alternatives that don't constantly disconnect or feel rushed.