The Game Itself
3.5 Stars
The Video: Sizing Up the Picture
2 Stars
The Audio: Rating the Sound
4 Stars
Replay Factor
2.5 Stars
Bottom Line
Worth a Look

'MXGP 2' is, as the name would suggest, the sequel to 2014's 'MXGP,' the first game to be based off the FIM Motocross World Championship. While the MXGP world championship might not be the most well-known in North America, as that honor goes to the AMA Motocross Championship, it's still a huge accomplishment and a valuable license to have for a game. Featuring over 15 real tracks and dozens of licensed athletes, 'MXGP 2' is developer Milestone's most feature complete take on motorcycle racing yet.

The biggest difference between 'MXGP 2' and other racing games is that motocross races are formatted uniquely. Unlike a NASCAR race, which is a test of endurance over hundreds of laps, motocross is more about consistency. Races are generally short, but each track is ran twice during a championship. The winner being whoever earned the most points in the two competitions, which means that someone who didn't win either individual contest can actually come away the victor.

Since the margin of error is so slim, it adds a lot of tension to each race. This same drama definitely transfers over to a virtual version. During one of my early races, where I was still learning the idiosyncrasies of staying on my bike, I had used all six of my rewinds (similar to 'Forza' players can rewind time when they make a mistake so their whole race isn't ruined) early on. After winning the first race and leading every lap of the second, I ended up crashing on the last turn. Since I had no get out of jail free cards, I ended up coming in fourth place that race and ended up coming in second overall.

It's a good thing that 'MXGP 2' allows new players to use the rewind feature since I experienced a pretty sizable learning curve while playing. Part of this can be attributed to the game only having a series of short video tutorials, which touch on some advanced tactics, but not enough to where I felt like I knew them by the time I finished watching. I was left wishing that there were some playable tutorials that would go over these advanced maneuvers (such as changing your rider's weight with the right stick) since they determine the difference between a good and bad finish. 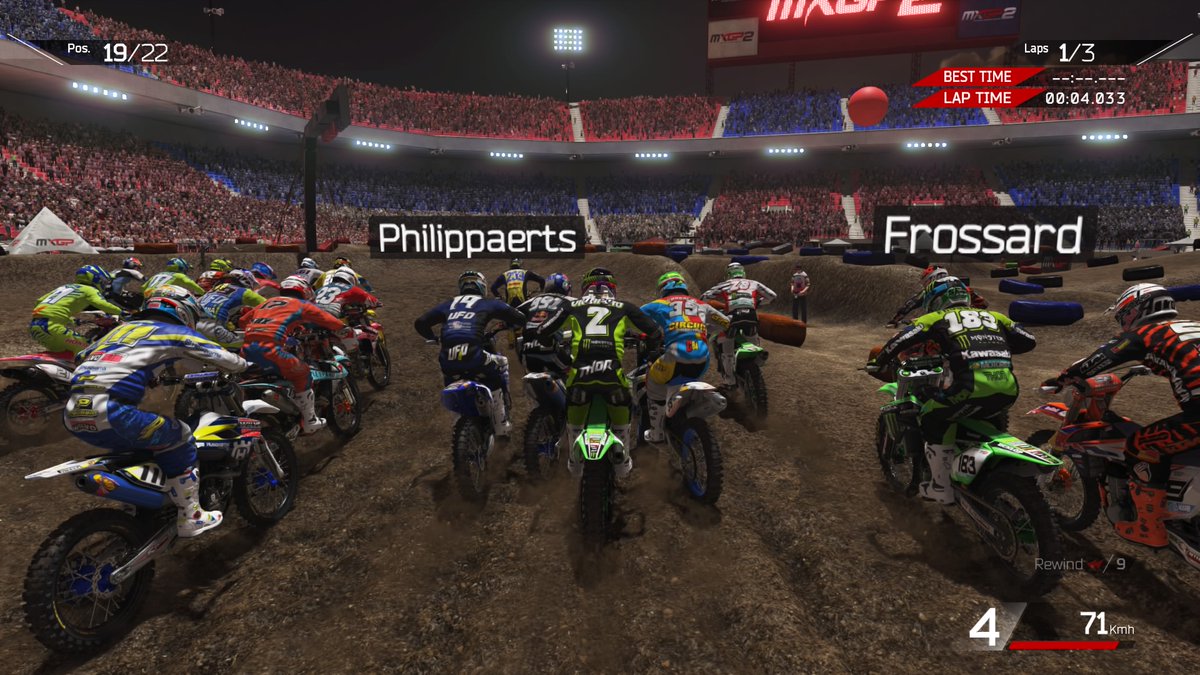 Eventually, with enough practice (and plenty of 10th place finishes), I came to grips with the controls to where I was consistently finding success. I inevitably hit some hiccups, as sometimes I'd hit my rear brake when I should've hit my front brake, but I found the learning curve quite fun to overcome. It's worth noting that a lot of this complexity is completely optional, as the menus allow the brakes to be used together if wanted and physics can be made more forgiving.

After finding some success in one-off races, I spent the majority of my time was spent in 'MXGP 2's career mode. I got to create my own racer (and even customize his racing gear), and compete in the MX2 class (which features less powerful bikes). I found the mode to be bare bones, as there's barely anything to do but compete in race after race. That's fine, but it definitely lacks the nuance and depth that makes modern career modes great.

Eventually, my rider did well enough to where a more reputable racing team wanted to sign him. I gladly signed on to this new opportunity, but sadly it also switched my class from MX2 to the premier MXGP class. Since this was done mid-season (and you can't compete in both which really makes no sense), I ended up not placing in either class despite winning every race I was in. That's a strange quirk, and I doubt I'll race another full season just to see my character win a virtual championship. 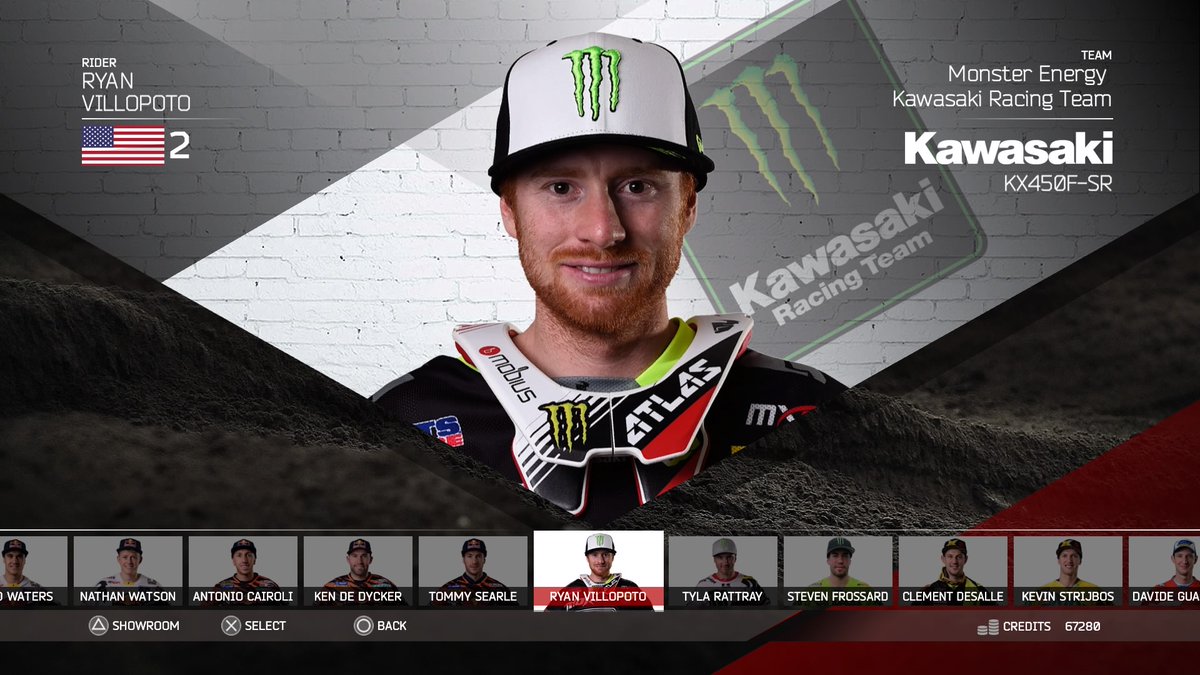 Other notable modes include a country-based tournament called FIM MXON (which isn't great since your success is dependent upon your CPU teammate's performance) and Real Events. The latter essentially allows players to relive moments from the previous seasons, and it was a cool introduction to the MXGP since the only racer I was super familiar with was the now retired Ryan Villopoto. I found that getting to reenact real moments (such as crashing early in a race and coming back to win) is both challenging and informative.

While motocross is 'MXGP 2's main draw, Milestone has also included 4 made-up supercross (indoor) tracks. It's a cool addition in theory, but they feel second-rate compared to the 15+ licensed tracks (especially as they're generically named "Football Arena") that make up the rest of the game. I had no motivation to race on a fictional football field when I could be racing at Glen Helen or Talavera de la Reina instead. 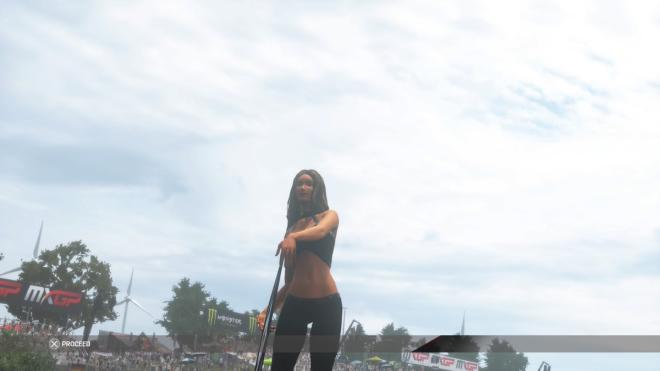 'MXGP 2' is mostly an okay looking game, but there are a few weak areas that really take away from the experience. While the character models for the bikers look fine, the rest of them (such as the crowd and the woman who holds up the 30 seconds sign prior to a race starting) look terrible. It's strange that they added some of the extra characters to the track since they don't add any realism, and only take away from the visuals.

Another issue is that I constantly noticed textures and character models popping in while I was racing. Swarms of the crowd will just appear out of thin air in the stands, and the racetrack will gain detail as you approach a jump. This is seen less often in first-person view, as I saw less of my surrounding compared to third-person, but I still saw it enough to where my enjoyment was impacted. 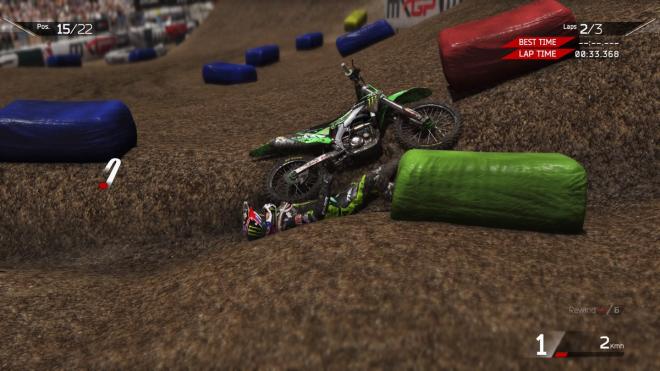 The sound effects are really well done in 'MXGP 2,' and I was instantly reminded of all the times I went to motocross races as a kid. From the revving engines at the starting line to the bikes accelerating while battling for the hole shot, it all sounds great. Milestone clearly spent considerable time making sure that all of the vehicles sound accurate, and I was left impressed with the sound design.

After just a single glance at 'MXGP 2's main menu, I could immediately tell that there are a ton of different game modes on offer. While that's definitely true, several of the modes essentially serve the same purpose. For example, instead of a quick race mode where I could set up my own race on any track, I instead have to choose from either an official MXGP track or a supercross track from the mode select. This makes simply getting into a race more cumbersome than it should be, and if I want to switch from an outdoors track to an indoors one I have to go back to the main menu.

This type of complication also plagues 'MXGP 2's online mode, where players create their own rooms. I had a terrible time trying to get into an online race, as when I used the game's matchmaking I was often put into lobbies with only one other person (where I'd wait for minutes and nobody else would show up). When I would manually browse rooms, I'd often click on a lobby that the game would say was in between races only for them to start the race by the time the game would slot me into it.

It's needlessly frustrating, and it's a bummer since the online play can be fun. I had a blast going up against other players and testing my skills, I just wish it wasn't so bothersome to do so. There is plenty of content here, it's just up to the player if they want to continually deal with minor frustrations in order to enjoy it.

There really aren't many simulation motocross games being made anymore, but thankfully Milestone has made a good one. 'MXGP 2' lacks polish in its visuals and multiplayer, but I still ended up having plenty of fun once I got past the learning curve. While there is still plenty of room for the series to grow, fans of motorbike racing won't find anything better on the current generation of consoles right now.