The hit manga and anime franchise 'Attack on Titan' finally makes its way to consoles and PC in an action game from renowned developer Omega Force. Retelling and going beyond the anime's first season, the game promises to let players experience what it's like to use the iconic omnidirectional movement gear and destroy Titans with 10 different playable characters.

Omega Force is one of the most talented developers that doesn't get half as much love as they deserve. They've successfully spun gold from ideas that absolutely shouldn't work in theory, and while 'Musou' games sound dull on paper, it's a testament to how strong their games ultimately are that they end up as extremely fun action games, innovating in little ways with each successive entry. 'Attack on Titan', in some ways, might be one of their most enjoyable efforts to date, the rare game that runs with a single idea and implements it so well that any flaws the resulting game has ultimately fade away. I don't like the anime series this game is based on in the slightest, its pacing is a little too slow and it too often feels melodramatic, but I do love the basic concept behind it. That's why I'm so happy that Omega Force has executed the franchise's ideas almost perfectly, leading to one of the year's most enjoyable action games. 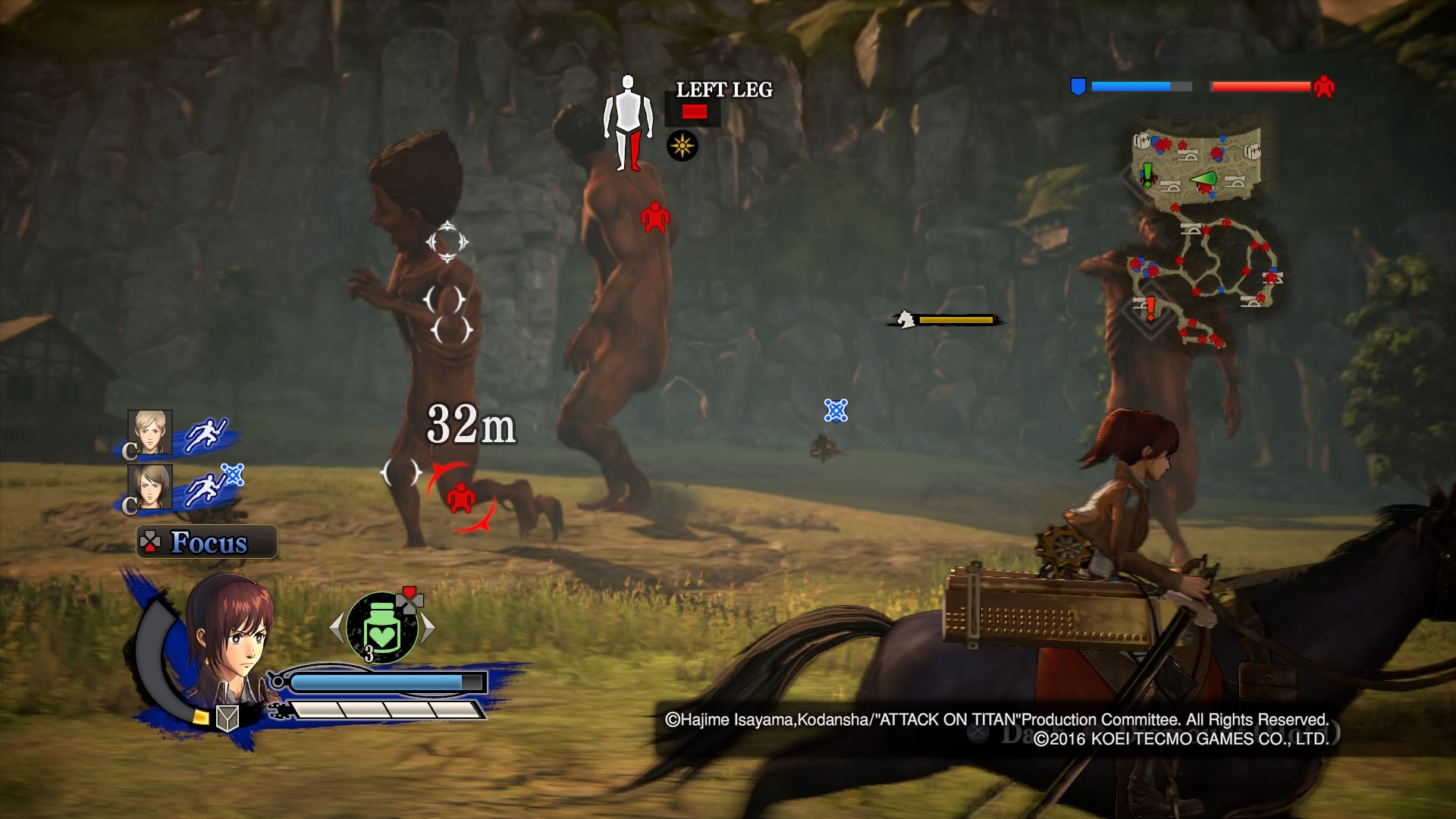 For those unfamiliar with the source material, 'Attack on Titan' tells the story of humanity building giant walls and living in closed off cities to live in relative peace and hide from Titans, giants who eat humans. Though the walls hold for hundreds of years, the Titans eventually break through, wiping out a fifth of the world's living population and greatly reducing their livable territory. Those who are capable are trained to fight back using omnidirectional movement gear that allows the military to easily cover great heights and distances in little time at all, giving them a chance to strike the nape of the Titan's necks, the only surefire way to actually kill them. The story focuses on Eren Yaeger and a host of new recruits to the military as they fight to reclaim a semblance of ordinary life. The game retells this same story, mostly covering the anime's first season and going a little beyond it, but it's a fairly truncated version of the events. Only the essentials to the plot are given much attention at all, with everything else falling by the wayside. It actually works, surprisingly enough, keeping things exciting enough for most of its running time. Things begin to go south near the end of the story, as the game rushes to its conclusion and skips some vital details, but it's an entertaining yarn nonetheless.

That's not much of a problem here, with the game being carried entirely by the strength of its mechanics. Despite the developer behind it, 'Attack on Titan' shares little in common with 'Musou' titles or just about anything else Omega Force has made. There's a small layer of familiarity, largely in how missions essentially boil down to clearing out as many targets as possible within a large map, but that's about it. Where 'Musou' games see you clearing out masses of enemies in seconds, every single foe here is an exciting, important obstacle to overcome. Even when I reached the point where I could kill a Titan in a matter of seconds, every single kill mattered, every action I took held weight and slowly tipped the scales in my favor. The basics see players controlling one of 10 different characters, all of whom have access to the omnidirectional movement gear, which allows players to latch onto scenery and swing around the map at incredible speeds. Movement feels absolutely fantastic and takes no time at all to learn, with hands down the best swinging mechanics since 'Spider-Man 2' seemingly perfected it years ago. The characters available are weak and can barely take a hit without struggling to move, but with the gear, they are swift, and using speed is the best advantage players have over the slow, clumsy yet extremely powerful Titans. 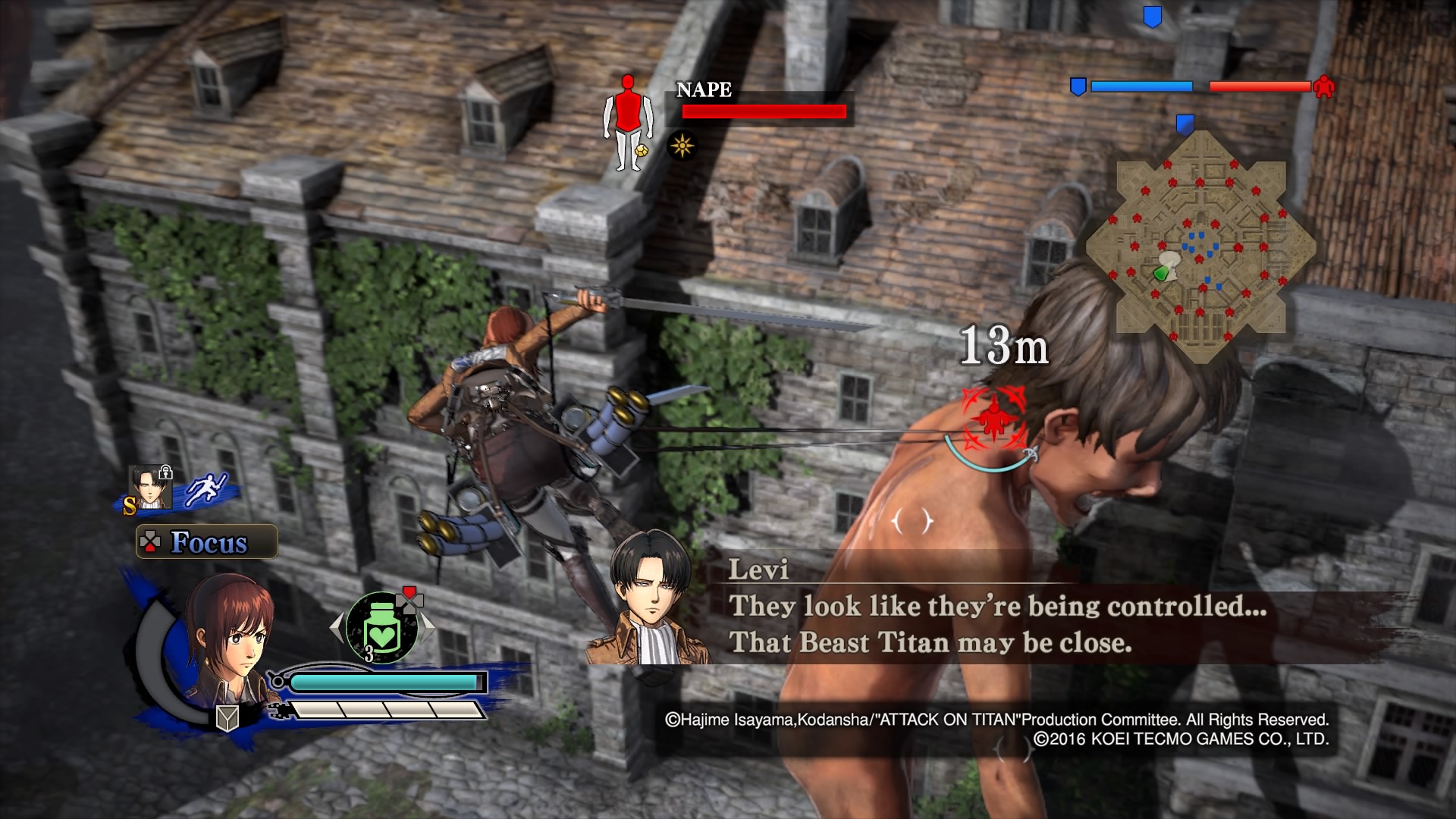 Combat itself is fairly basic, which works to its benefit. Players latch onto the limbs of Titans, fly at them, and time attacks well enough to lop off a limb, killing the Titan when they've destroyed the nape of their necks. While this is as complicated as the core really gets, there are plenty of little variable factors to consider that keep the game from feeling mindless. The hooks that get launched into Titans only hold for a limited amount of time, so attacks need to be swift. Additionally, they'll break if players pass their line through scenery while still latched onto a foe. While it's possible to simply go for the necks and get quick kills, enemy limbs often contain materials for upgrading equipment, so it's worthwhile to go after them. Later on, some titans will resist damage until specific body parts are destroyed as well, which adds just a little more depth to it all. Attacks and movement will drain gas and damage blades, leading to characters getting a severe debuff when supplies run dry, however, so it's vital to gather these from characters littered around the map or the bodies of fallen allies.

This game isn't really about its complexities though, it's about how satisfying overcoming a seemingly insurmountable foe feels. Once the basics have been laid down, it's about learning how to do that faster, stronger, and better than before. 'Attack on Titan' can occasionally feel light and simple, but in terms of raw satisfaction, few other combat systems feel this fast and fun. But the game still offers up as much diversity in the fights as possible, with each of the 10 characters having substantial differences between them. Some use spinning attacks that get stronger the further away they are from foes, some can attack multiple times in succession, some start weak and get stronger with each limb they remove from an enemy. My personal favorite characters are commanders, who are weak themselves, but can order other characters around to attack limbs for them, making the game feel like a more action-oriented version of 'Pikmin' at times. It's extremely satisfying dropping in a bunch of allies on a foe as if I'd ordered a missile strike. There are a few stages where a Titan can be controlled, turning the game into a simple, if slow, beat 'em up, but it's ultimately a minor diversion, and the game wouldn't have suffered in the slightest without it. Thankfully, these sections are few and far between, so they never really drag things down.

The combat is also carried in part by the game's excellent mission structure. Within each map, there will be a central string of tasks that need to be completed, but as the missions go on, allies will lay down distress signals, side missions that can be carried out to net players with more supplies, or allies who can join in when fights get tough. While the missions are fun on their own, completing each side mission makes the game feel even faster and more frantic than usual. It's a fun game that only gets more exciting as more effort is put into it. 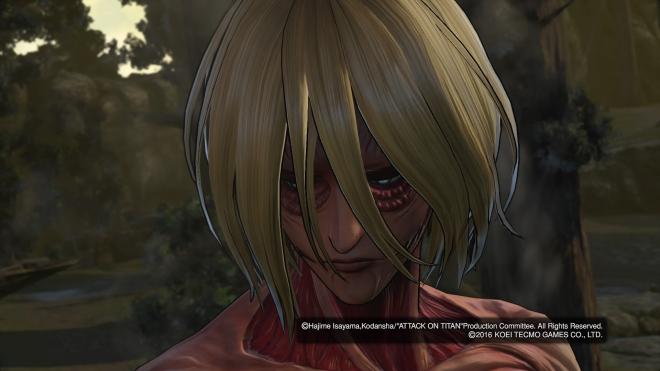 While playable characters and Titans are animated lovingly, and watching a Titan flail about as it loses more limbs is strangely satisfying in a morbid way, the game absolutely uses its speed as a way to cover up some sparse environments. There's some light pop-in, too, which is a bit of a shame. It's certainly not an ugly game, but it does feel a bit lacking in detail in places. 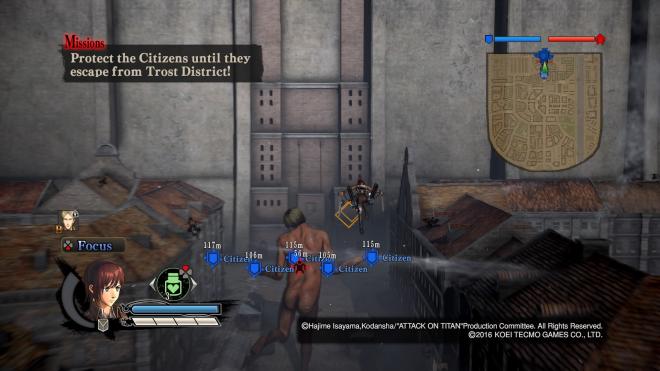 The music on offer ranges from fairly generic rock to some absolutely incredible tunes that benefit the game's oppressive atmosphere terrifically. While there's no English dub, the anime's Japanese cast all reprise their roles here and all perform really well. It's unfortunate that I ended up hearing repeating dialogue during missions more often than I'd like, but it's a minor point against it.

Outside of a fairly lengthy campaign mode, there's an entire online mode that sees players tackling random missions together to earn new equipment and unlockables. While the game is plenty of fun in single player, this multiplayer mode is extremely fun, and gives the game plenty of longevity. Additionally, when the campaign is finished for the first time, new objectives are added to every single mission in the game. These new objectives nets new rewards, so it's worth replaying the game at least once to see the new content. 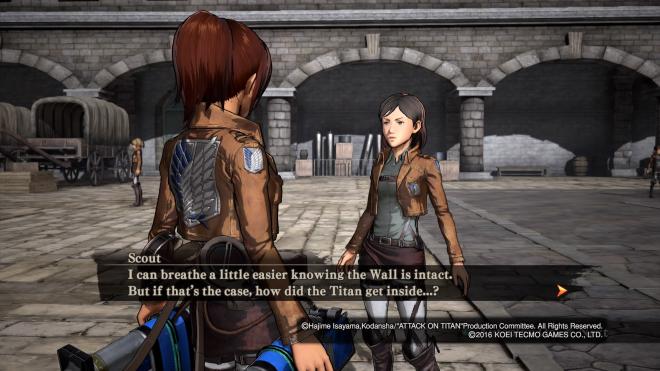 'Attack on Titan' focuses on a single idea and nails it absolutely perfectly. The game runs the risk of feeling repetitive at times, but it smartly mitigates that by injecting enough variety into each mission and playable character. While the game isn't without its flaws, at its best, it's an extremely exciting action game with some of the greatest movement mechanics I've ever seen. 'Attack on Titan' is both perfect for series' fans and a terrific game in its own right, and absolutely shouldn't be ignored.