'Pac-Man.' The legendary, iconic video game character. He's a member of the upper bits and bytes pantheon of pop culture mainstays. Mentioned in 'Wayne's World', 'Scott Pilgrim vs. the World', 'Futurama' (as the hilarious 'Gender-neutral Pac-Person') etcetera. Mario, Tetris, Pong, Space Invaders ... and Pac-Man. Everybody knows them. Even grandmothers who have never played a video game in their life. Pac-Man is to video games what Pelé is to soccer. Remixed, remade and re-released on every home console since its arcade roots, 2016 brings us 'Pac-Man 256'. An exciting update or a slog to plod through?

'Pac-Man 256' is quite the simple game. An endless maze, foes, pellets, power-ups and Pac-Man. No more, no less. Constantly looming over (or, more accurately, under) you is a glitchy mess of pixels, which takes its cue and inspiration from the famous 256th level, the 'kill screen,' of the arcade classic. This acts just like you'd expect, and significantly ramps up the difficulty because of the imposed time limit. Don't stray too long at the bottom, or you'll be derezzed. Sometimes, the glitch even pop-ups in smaller bursts across the playing field. Very annoying, yet very challenging. It reminds me of those classic Mario or Donkey Kong stages with an ever-advancing wall of doom. 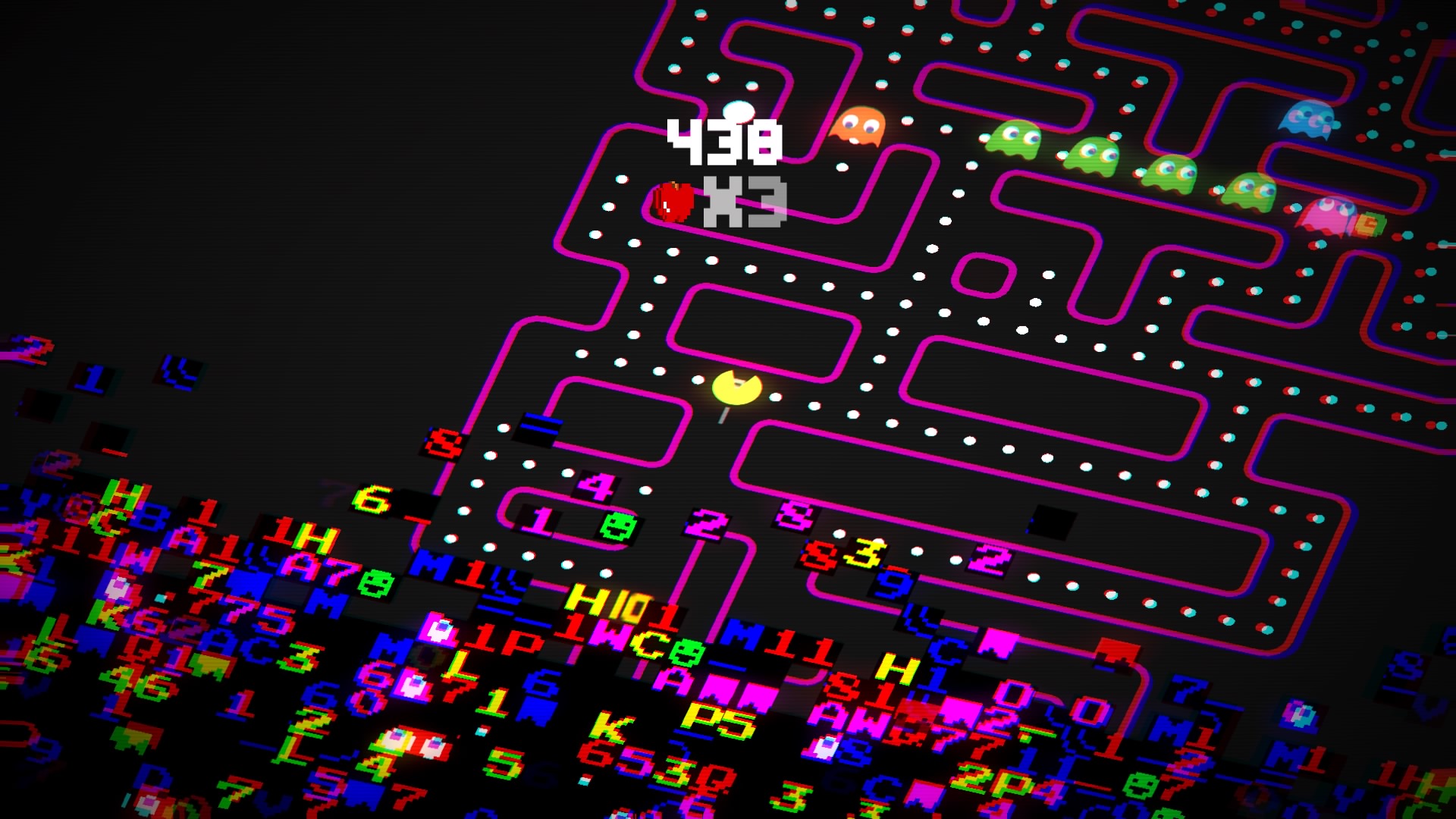 There's loads of power-ups, including a laser ("that toasts ghosts"), freeze (slows all ghost movement), bomb (touch a ghost to trigger an explosion), giant (Pac-Man grows and can squish ghosts), tornado (summons a tornado that chases ghosts), stealth (ghosts cannot see or harm Pac-Man), fire (Pac-Man will leave a fiery trail), and many more. New traps will become accessible after collecting more Pac-dots. I haven't unlocked them all, but there's at least 24 to collect. Each power-up can be assigned to the so-called "loadout." The loadout collects three power-ups that will be dropped in the game, and that can be summoned whenever needed via a simple press of the button. Every once in a while, a free gift will be offered. Most of the time, the gift will be extra coins. Coins are super necessary to upgrade the unlockables. Every upgrade will result in more time to use them on the board, going from a measly 3 seconds to more than 10 seconds. This can mean the difference between life and death. And yes, one-hit kills.

Gameplay-wise, there's just one (supposedly infinite) board. Lay-out wise, however, there are multiple options, and they're all lovely. There's "Pac-Man 256," the default setting with a semi-forced 3D perspective (akin to 'Sonic 3D' on the Genesis), "The Grid" with cool blue-and-white aesthetic and raised labyrinth sides (sadly, no Jeff Bridges cameo), "Crossy Road" in which Pac-Man is a chicken and all the ghosts are cars (hilarious stuff), "Robotz" where Pac-Man resembles a lawyer-friendly Wall-E and all ghosts are 50's wind-up robots, "CEDX" with cool neon-lights, "The Office" with ghosts as floating chairs and a Dilbert-esque environment, "Go Karts" where all ghosts are karts (dare I say, "ghost karts?"), "Garden" where all ghosts are ladybugs, "Pac-Mania" offers LEGO-bricks and the classic 3D-version of Pac-Man, "Shuffle" that mixes a few of these lay-outs into one whole, "Pac-Man 256", the default setting, and finally "Classic 80's," which is self-explanatory and my personal favorite. 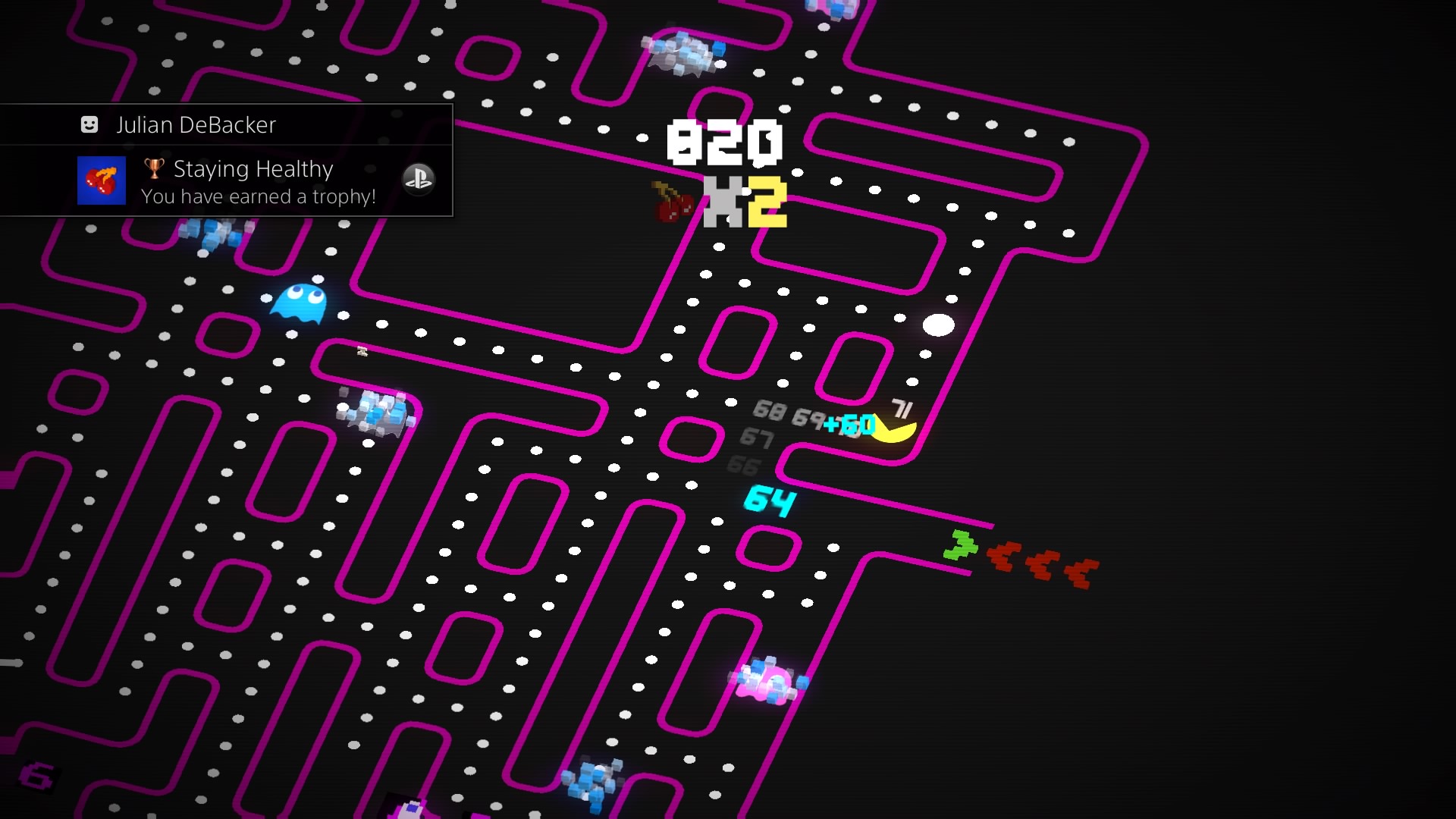 There are additional small missions too, such as 'eat 500 Pac-dots'. These will give you more dineros to spend on upgrades. Each level also yields unexpected challenges that are just for kicks (no gain to be had), such as 'best ghost multiplier'. For the truly dedicated, there are stats that tell you how good you are (or how much you suck). For the record, I at 92 'Pinky' ghosts (a personal record compared to other edible ghouls), but Pinky also caught me 19 times – more than any other ghost. Must be a personal vendetta that I'm currently unaware of.

'Pac-Man 256' is excellent. It's simple pick-up-and-play nature makes it addictive as sugar. 'Just once more' will be your mantra. Just like 'Tetris', it's a game that will cost you a lot of sleepless nights. You'll want to doze, but the game is a doozy. 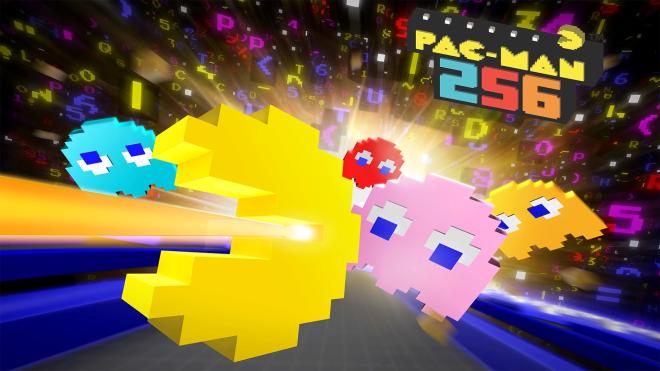 It's Pac-Man! What do you expect? That said, the 'Classic 80’s' lay-out of the board features very sharp, high-res textures (while still looking like a 30+ years old game). It has been significantly adapted for modern gamers' eyes. Very smooth and crisp settings. If you want blocky, pixely, vintage goodness, then by all means opt for 'Pac-Man 256' in which every pixel can be counted. All a matter of taste, of course. It's slick, it's classy, it's stylish, and yet, it's very vintage. Excellent! No noticeable hints of slowdown, framerate problems, clipping or drop-outs. But then again, if this game did feature hiccups, it would be a shame. This is the kind of game that a Gamecube could pull off in its sleep. And that’s 100% a compliment. 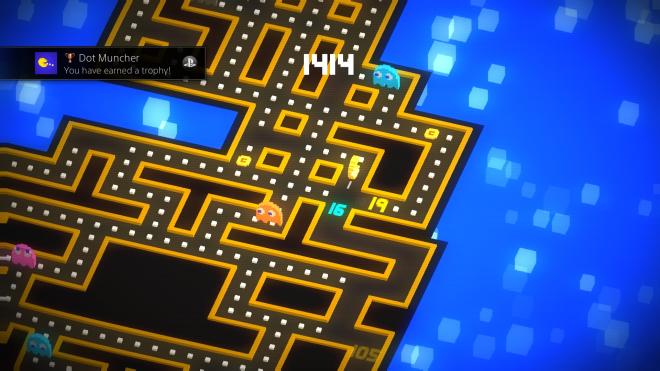 No background music, just classic sound effects. Nleep. Bloop. And bleep. I wouldn't want it any other way. So very satisfying.

Loads of unlockables and upgradeable power-ups. 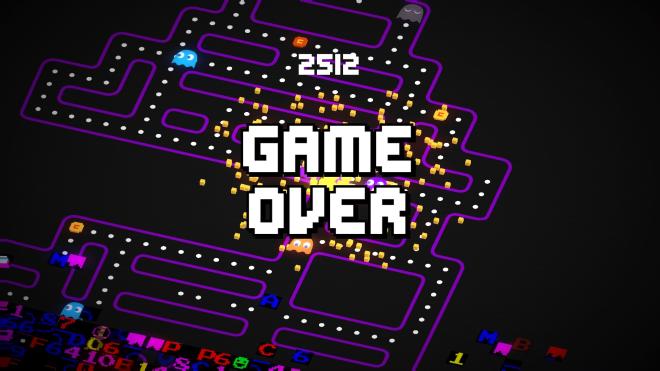 'Pac-Man 256' is a throwback to simpler times, when gaming was just a few coins, a lot of sweaty palms and fun. All this, and more, and all the better for it. Breezy, enjoyable, cute. My favorite game of 2016 so far. Highly recommended.