The Game Itself
2.5 Stars
The Video: Sizing Up the Picture
3.5 Stars
The Audio: Rating the Sound
2 Stars
Replay Factor
2 Stars
Bottom Line
Skip It

'Goliath' is the first game from Russian devs Whalebox Studio. The game has players building their giant robot in order to battle monsters in a savage land. Its first DLC, 'Summertime Gnarkness', features content meant for level 30 and above players and is available as a free update to the game.

Indie survival games are all the rage now, especially on Steam where they breed like rabbits. 'Goliath' starts off like most of them do, with the player character being dropped into the wilderness (literally this time, as they are involved in a plane crash) and then running around collecting trees, twigs, rocks, and so forth. After a few missions and tangles with deadly spiders and chickens, I was taught how to craft huge wooden automatons from the stuff lying around. These goliaths can follow me around like a bodyguard or be hopped into for direct control. They have special abilities like boulder throwing and spin attacks. They can be upgraded, repaired, and equipped with giant weapons. 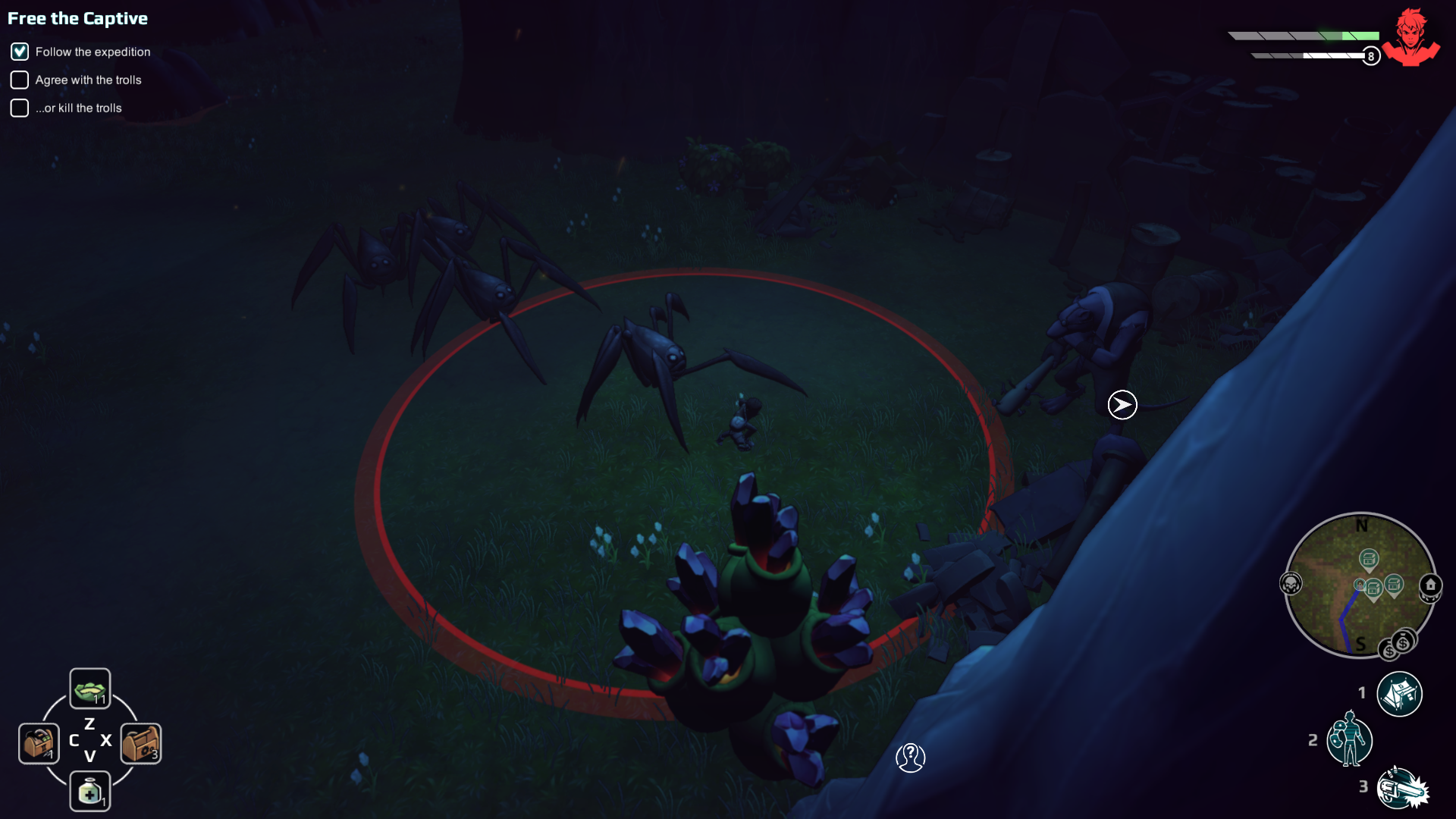 With my newfound goliaths in tow I once again set out into the wilderness, looking for my copilot who has landed god knows where and is communicating with me via an unreliable radio. He’s on a different world, but there are teleporters on each world that I can hop to if I collect enough gems. On the different worlds I mostly find more of the same...trees, rocks, spiders. The monsters level up on each world, but they are often a mismatch for my level and I either stomp them handily or get stomped in seconds. There are dungeons, but they’re small, full of the same monsters and items, and generally not worth it. 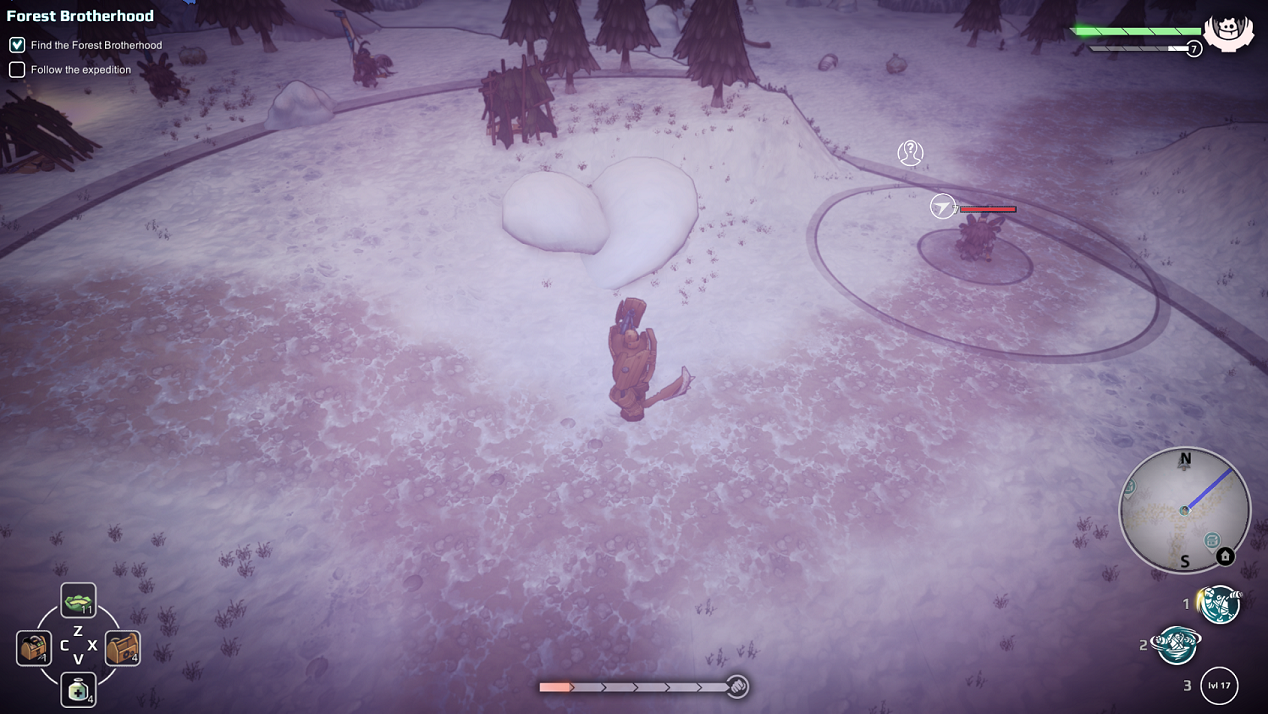 To go along with the generic survival system is the same RPG and questing arrangement we’ve seen countless times. NPCs ask me to go find so many twigs, or find this lost person, or basically just fetch something, ad nauseum. I did a few just to test it out but quickly became bored. Actually, even with the somewhat novel survival/mech thing going for it, 'Goliath' is just a boring game. It doesn’t have the survival chops of something like 'The Flame in the Flood' or the crafting of a 'Subnautica', despite taking cues from many similar games that have come before it. I couldn’t get into the rote tree chopping, endless goliath repair, or dry exploration.

It’s not that the systems of 'Goliath' don’t work well, because they do. It’s not the kind of game that is broken or unplayable by any means. It’s all just so bland and tasteless. Once I had fully upgraded my base, which didn’t take very long, all that was left was shuttling from one biome to the next, looking for more parts and making more mechs that have a tough time with the local wildlife. Making any repairs away from base is expensive, so I wasn’t able to go rampaging into the woods willy nilly or risk my human guy dying too. The goliaths get bonuses based on their materials and the biome they’re in, like extra speed for stone goliaths in the rocky world and so on. Sadly, unlocking each new goliath is a tedious chore filled with those fetch quests and arbitrary world hopping. Enemy AI and pathfinding is simultaneously odd and predictable, and they are usually content to rush me while I pile boulders on top of them. Leveling, required for better abilities, is a rather slow grindfest. 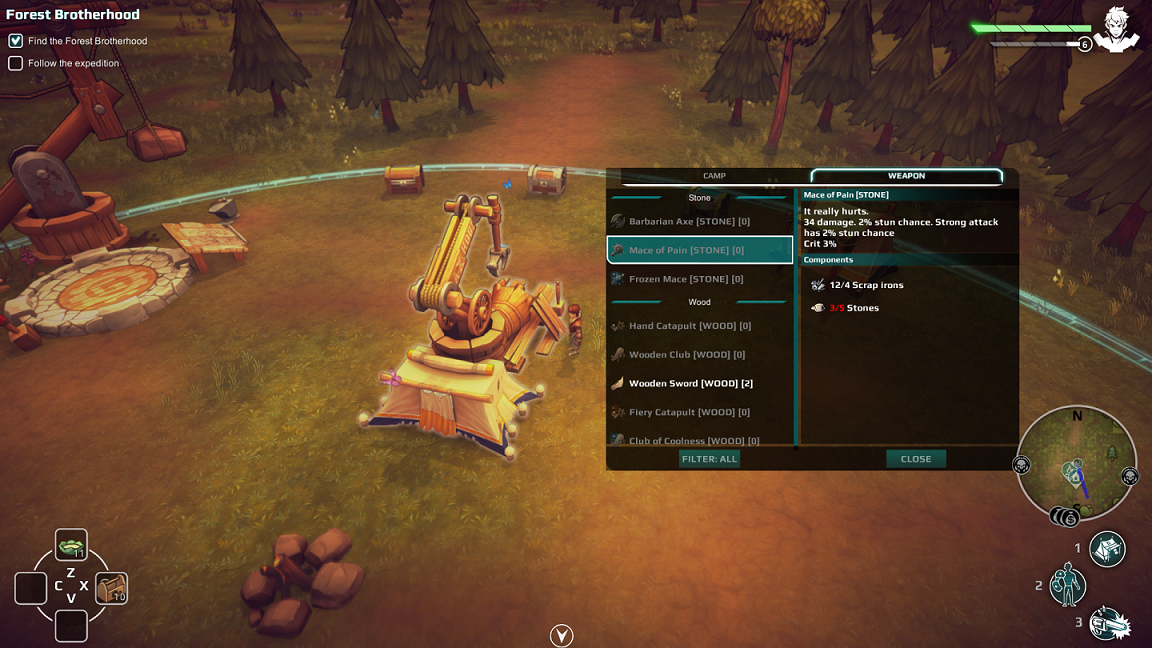 The writers tried their hand at irreverent wit instead of a serious storyline, but most of the jokes aren’t very successful. The main character Gromov occasionally has some wry lines. He alternates between super cheerful and kind of strangely cheerful, and pokes at the fourth wall sometimes but doesn’t go far enough. 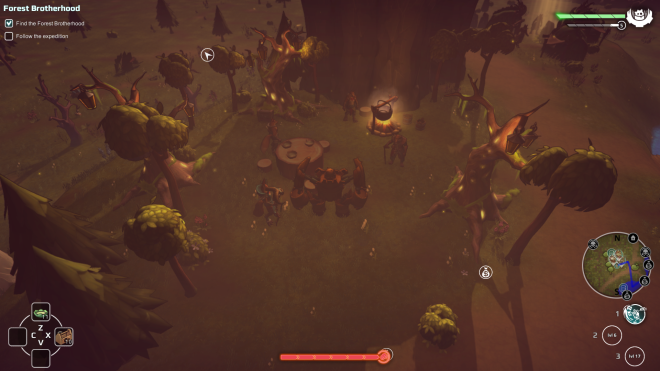 'Goliath' has issues with pathfinding and odd creature behavior, but the visuals overall are quite nice. It has a somewhat blocky, cel-shaded theme with some awesome hand-drawn stuff and interesting animation. Conversely, it has a habit of getting fuzzy and losing detail, especially environmental textures like the ground cover. The goliaths look pretty cool though, in a fun 'Iron Giant' kind of way. The controls were designed with a controller in mind and can be cumbersome with the mouse and keyboard. 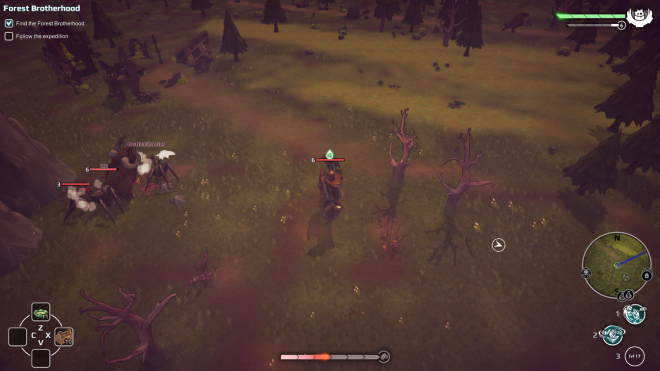 The audio didn’t make much of an impression on me, from the common sound effects and wilderness ambiance to the listless score. It’s all pretty tame, with a lack of voice acting to boot.

This is typically where survival games shine, by having addictive crafting or exploration routes that players can engage in for hours on end. 'Goliath' lost its appeal very quickly for me, even with the offer of badass new goliaths hanging above my head, locked away by levels, quests, and biomes that didn’t appeal much. The 'Summertime Gnarkness' DLC has a lot of endgame content, including level 30+ stuff, a hardcore dungeon, an arena, and new goliaths. But to get to it, you’re going to have to do a lot of repetitive stuff and fight piles of spiders. If you already love 'Goliath' and have been enjoying it since release, the DLC will probably appeal to you. If you haven’t picked it up yet, it’s not going to add much to the early parts of the game that could so desperately use an infusion of content to keep people trucking on through the woods/snow/deserts. 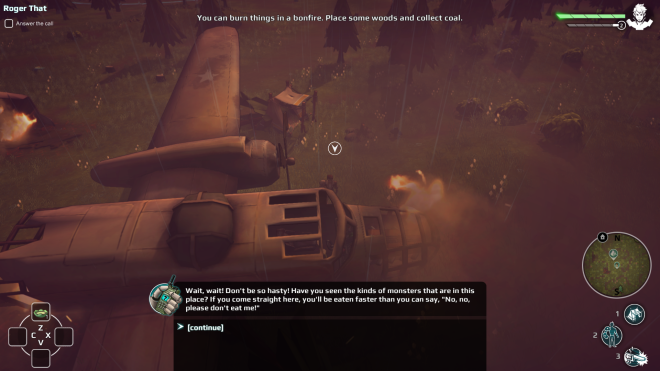 Try as I might, even with my fervent obsession/love of the survival genre, 'Goliath' isn’t doing anything for me. I very much want it to, because the idea of making big primitive mechs while doing typical crafty stuff actually sounds pretty good on paper. 'Goliath' comes up short on almost all fronts, unfortunately.