'Prison Architect' was developed by Introversion Software, a British company probably most famous for 'Darwinia'. 'Prison Architect' was released in alpha way back in 2012 and gradually grew in popularity on Steam, assisted by a direct crowdfunding effort. It has been brought to consoles by Double Eleven.

'Prison Architect' is a god/tycoon type game. The fate of an entire prison population is put into the player’s hands. The facility can be built from the ground up, from the power supply and water pipes to cell blocks, canteens, solitary, infirmaries, and more. Once the inmates arrive, the player can determine how best to handle their day-to-day lives: a heavy hand with lots of security and strict punishments for misbehavior, a low-security luxury prison, or a reform-oriented organization with opportunities for education and training that might lower recidivism. A subtle but unmissable layer of satire runs through the game, perhaps a criticism of how contemporary governments are increasingly turning to the private sector to manage incarceration. 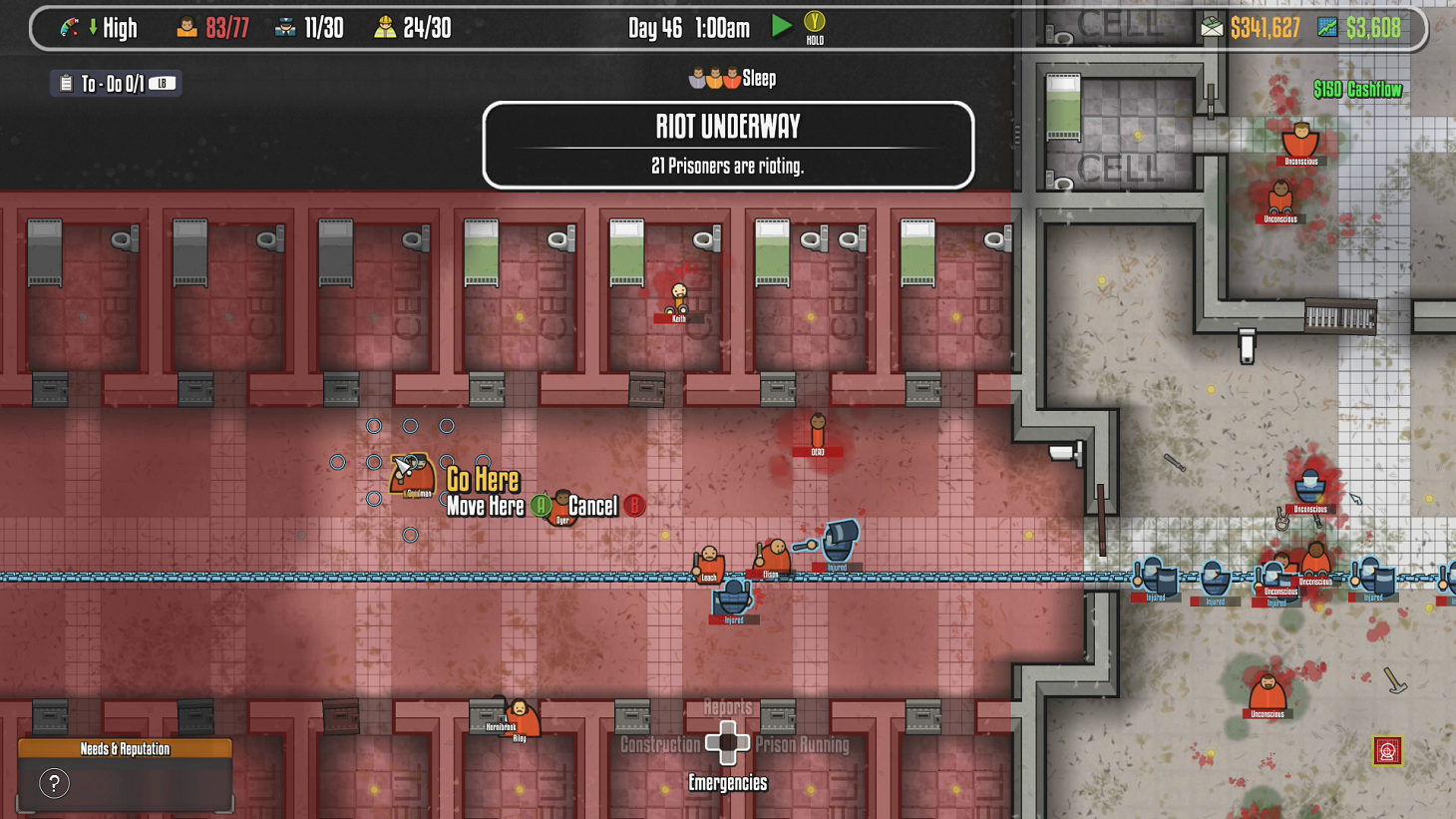 A collection of five missions with preset parameters and a loose plot, called Prison Stories, serves as a tutorial and campaign. In each one I was given a prison to run, but with strict objectives and a series of snapshots telling the stories of individual inmates and politicians. The interface is not overly difficult to pick up, but 'Prison Architect' does have a pretty big amount of detail. Every aspect of the prison is granulated and can be managed independently. Even the prisoners themselves can be herded into different cell blocks based on their behavior - model inmates earned themselves the nice cells, perhaps with a radio, TV, or private shower if I could afford it. This gave them an incentive to be nice. The more difficult or psychotic inmates, the ones who simply cannot play well with others, were tossed into max where their every move is observed by security cameras, heavily armed riot guards, dogs, and metal detectors. 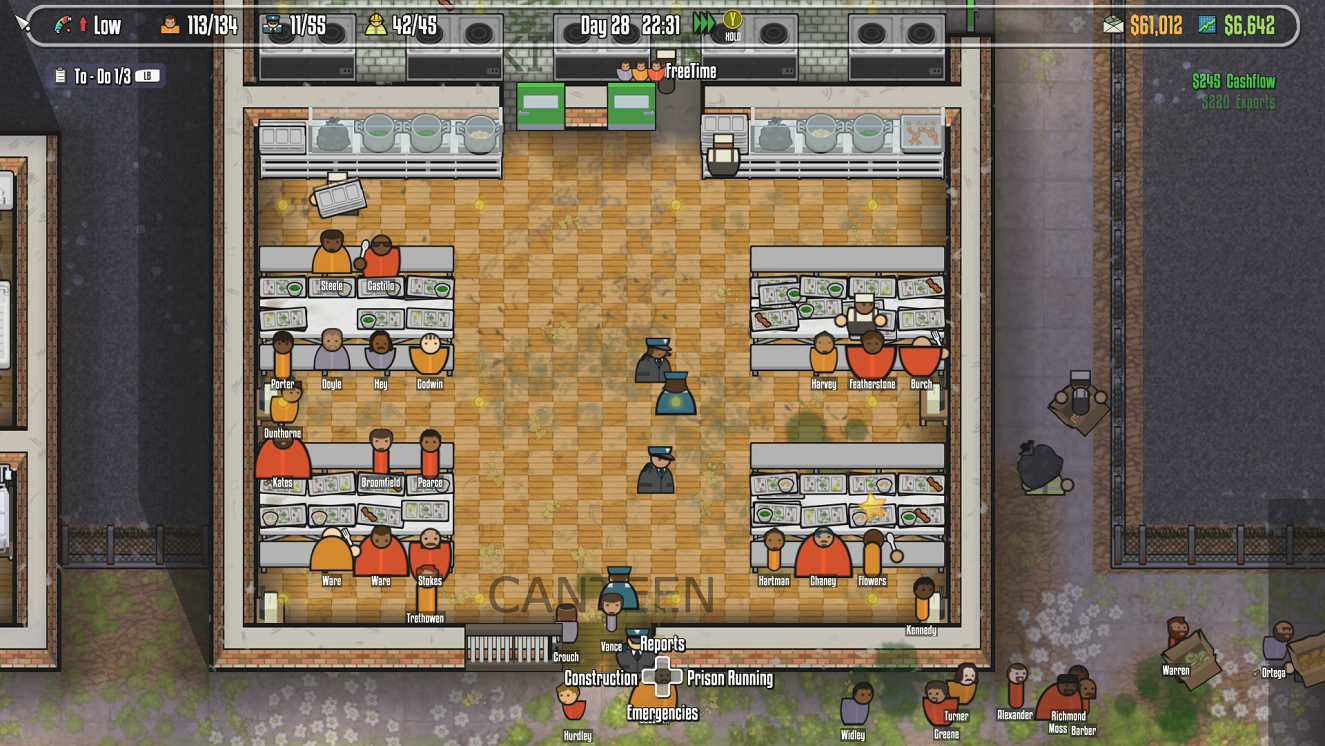 The game’s AI is very smart, and once assigned to a task, the staff was perfectly capable of doing their jobs without my intervention. The doctors automatically provide medical care to injured guards and inmates (in that order, of course), the cooks prepare food every day, and the guards autonomously patrol the grounds, open doors when needed, and break up fights. This let me look at big picture stuff, like quelling riots, putting out fires (literally), and choosing policies and grants to accumulate cashflow and keep everything running. There are a few weak points in the behavior, like the inexplicable habit of construction workers to get stuck in walls and be totally unable to finish buildings. Even if I fire that particular worker to make him disappear, his replacement will get stuck in the same spot and leave the same hole in my wall, which is kind of a liability in a prison environment. Guards sometimes behave erratically, like leaving inmates to wait behind locked doors while they stand idle nearby, necessitating a distant co-worker to come over and help.

Prison Stories can be skipped at any time in favor of the sandbox mode, which is pure jail construction joy. There is a tech tree that can gradually unlock new technologies and programs for employees and inmates, like tasers, K9 units, lawyers (useful for oppressing inmates even further), psychiatrists, and so forth. There are layers of inmate behavior that are ignored at the warden’s peril, like contraband, gangs, legendary inmates, former cop and guard inmates that need protective custody, and death row. Being a private prison, profit is of the utmost importance, so the more prisoners that can be safely managed the better. Minimum security inmates are only around for a few days and provide the least income, because they are less prone to making bad life choices. Maximum security inmates are worth more but come with troublesome behavior that requires careful management - they will steal items, dig tunnels, and kill guards whenever the opportunity presents itself. Death row inmates are worth the most but require specialized and expensive facilities. 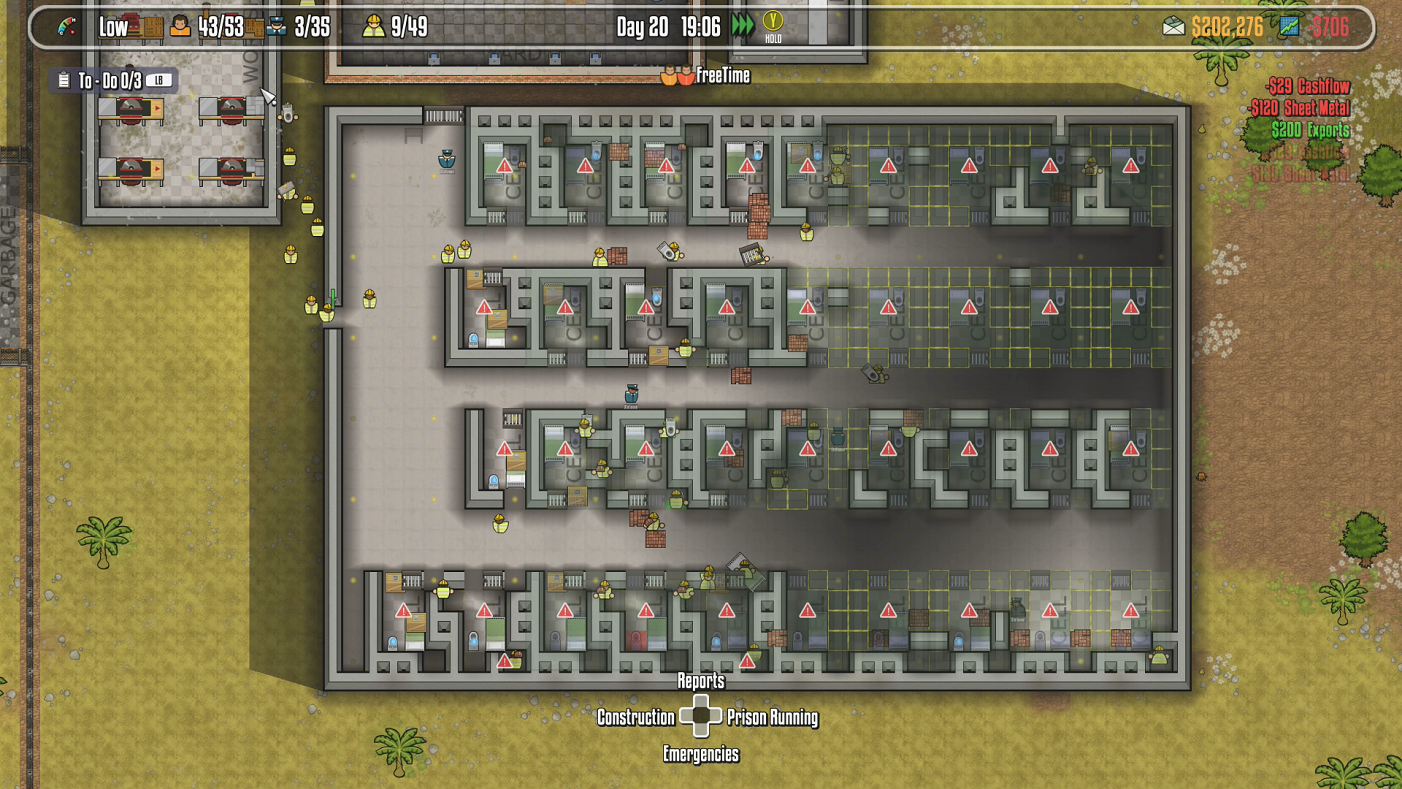 Like any good strategy or tycoon title, I found hours quickly dropping off the clock while I played 'Prison Architect'. The first prisons are very humble, but once I got past the early game crunch, I was fixated on building huge clockwork facilities with many room types, different wings for different levels of inmate sentencing, and of course opportunities to cut costs and get more money for even bigger projects. Like in 'The Sims', poor management and sometimes pure chance can lead to disastrous/hilarious results. 'Prison Architect' is not a strictly political game, but does have bemused commentary on how prisons are operated in real life and a thick element of dark humor. 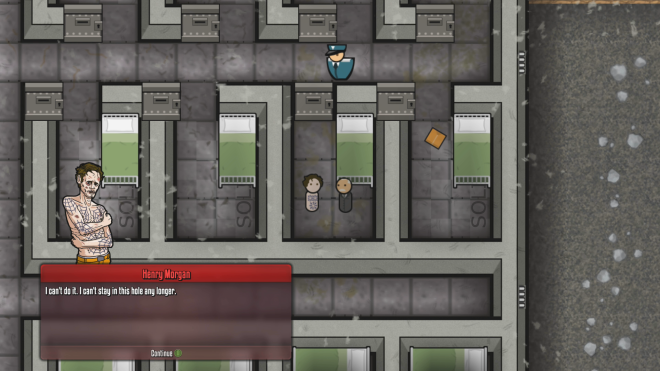 'Prison Architect' has a clean, ergonomic interface and has come along tremendously since its early access days. It has been translated to the Xbox One controller about as well as any strategy game could hope to be; getting around in the dozens of menu items is relatively painless. Performance has also been smoothed over, and very large prisons (500+ inmates) don’t break the framerate. 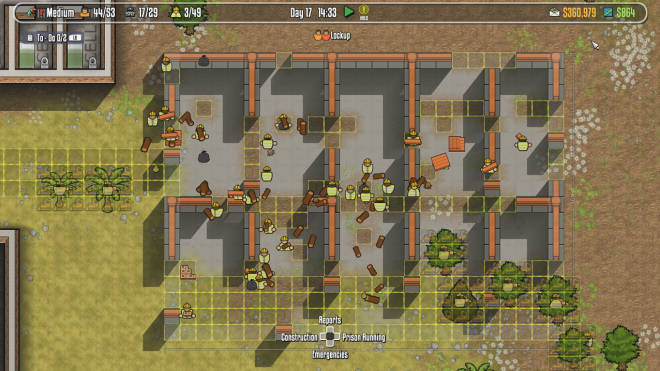 My own prison experience is very limited but the sound effects in 'Prison Architect' are immersive, from the managed chaos of the canteen to the deafening clash of riots, interspersed with the normal sounds of day-to-day jail existence. There is no voice acting, and very little music.

As if the thrill of creating my very own jail wasn’t enough, the game also offers the World of Wardens, where users can submit their facilities to be rated and downloaded by others. Prison Stories is a good tutorial but I was glad to be free of the hand-holding and get into the nitty-gritty of sandbox. 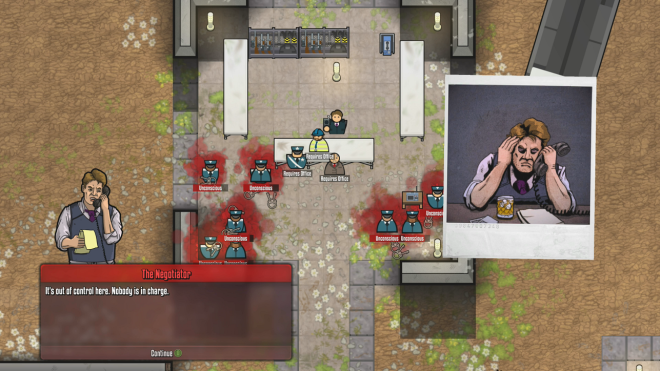 'Prison Architect' has grown from a wonky but promising idea into an awesome strategy experience. Except for some persistent pathfinding bugs, the AI and building elements are spot on, and I highly recommend this game even to people who may not normally enjoy the tycoon genre.