The Game Itself
2.5 Stars
The Video: Sizing Up the Picture
4 Stars
The Audio: Rating the Sound
3 Stars
Replay Factor
4 Stars
Bottom Line
For Fans Only

Developer CyberConnect 2 returns to Hirohiko Araki's world-famous 'JoJo's Bizarre Adventure' manga and anime series for a sequel to 2014's 'All Star Battle,' changing the gameplay dramatically from a standard 2D fighter to a 3D, 2v2 arena brawler featuring an entirely new story supervised by Araki himself.

'JoJo's Bizarre Adventure' is one of my favorite franchises of all time. It's an amazing mix of completely insane action, a sense of humor that's far smarter than most give it credit for, and some of the most flamboyant writing in the world. There's a good reason it has endured in Japan for so many decades, and become something of a cult classic in much of the world through the recent anime adaptation and official release in the US over the past few years. There's a charm to just about everything 'JoJo' and 'Eyes of Heaven' is no different, it's just a shame it isn't a more satisfying game in its own right.

As a piece of fanservice, 'Eyes of Heaven' is an absolute delight. Every single facet of the franchise it is based on gets at least some representation, and it's immediately clear through every aspect of the presentation that developers CyberConnect2 dearly love the series. Each character looks and sounds perfect, and with over 50 playable fighters for use during the games 2v2 brawls, that's no small feat. A large part of my time with the game was devoted to messing around with characters and just checking for every detail the developers so lovingly added to it all. Want to make two characters who despise each other fight together? There's almost certainly unique dialogue for that. Want both versions of series villain DIO on a team? There are exclusive attacks and finishers. Just about every combination of characters you can think of likely has something unique that makes each one worth seeing at least once. 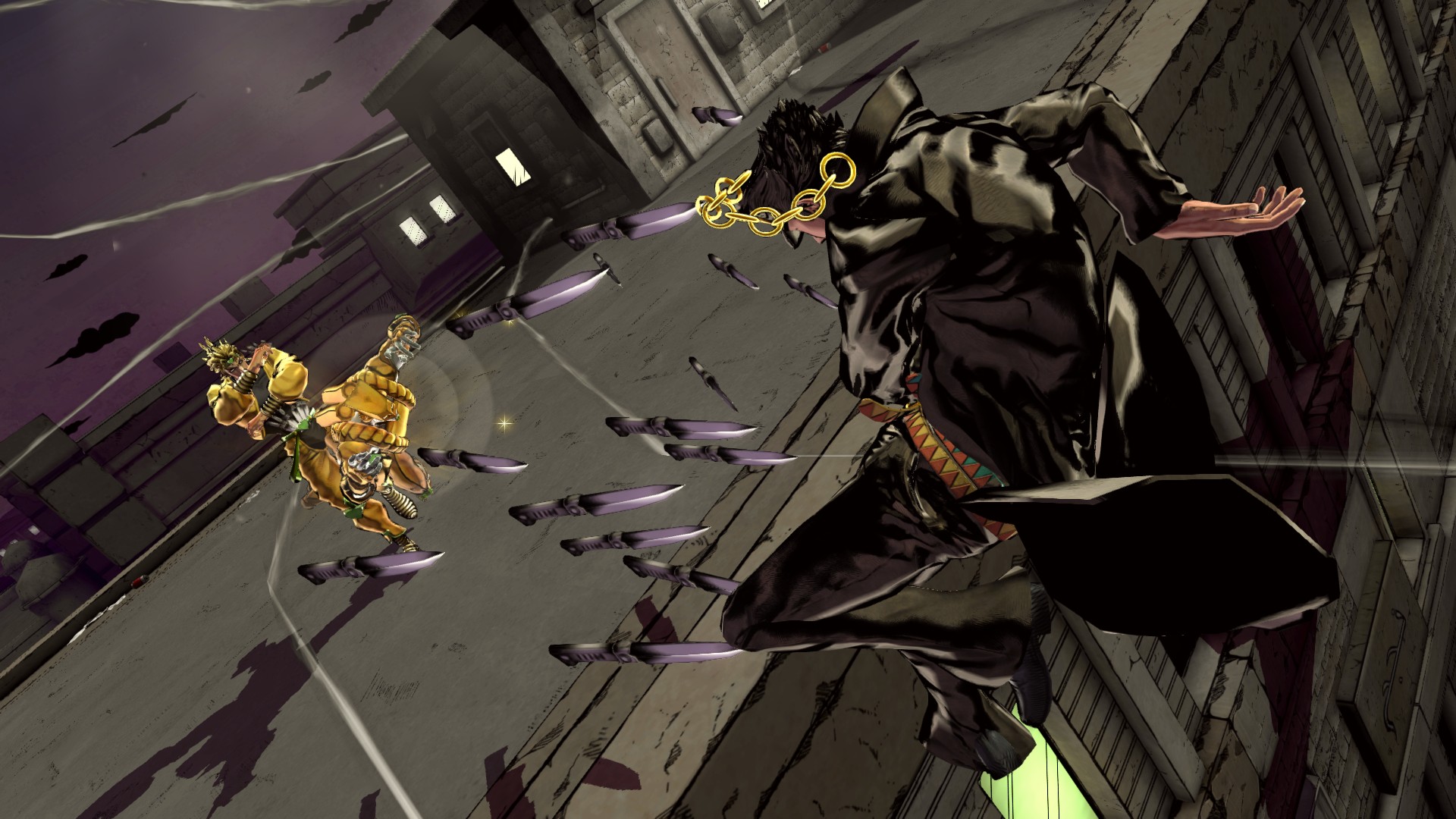 It's this love and care that, ironically, ultimately renders this such a disappointment. The gameplay, something of a modern take on classics such as 'Power Stone' is a 3D arena brawler where players scramble to eliminate each other as quickly as possible using the moves at their disposal, as well as items and powerups placed in and around each level. In some cases, even the levels themselves become massive parts in the fight, with recreations of scenes from the manga and anime aiding and hindering players. My favorite example being a café that opens up in a level early on, allowing players to stop in and get some coffee to heal up partway through a fight. Even just writing this up, I'm convinced I enjoyed this game more than I actually do, but it's near impossible to separate all of these terrific details from the actual gameplay.

All players can really do is use light and heavy attacks, as well as dodges, dashes, and guards. The game goes to great lengths to explain its systems and subsystems, often making it feel infinitely more complex than it really is, but what the game really amounts to is a slow, dull exercise in button mashing, a rush to see which players can punch each other faster, with no real thought involved in any of it. Each character has several unique skills at their disposal, but all that this adds is cooldown timers for each attack, so between standard mashing, I'd wait until a move was ready and use it as soon as possible. That's as complex as the game ever gets. It's a mindless affair, but a small part of me can't deny that it made me smile at least a few times. Pulling off basic combos with myself and a partner character often results in some terrific looking attacks, again peppered with fanservice and nods to the manga and anime, and the kooky story mode somehow manages to be a lengthy, content-heavy RPG-esque affair. The extra effort definitely helps the game a great deal, even if the gameplay just can't carry the whole package terribly well. It's a huge shame, because with the right blend of strong gameplay and the love CC2 clearly has for the franchise, this could have been something really special, instead, it all just feels hollow. 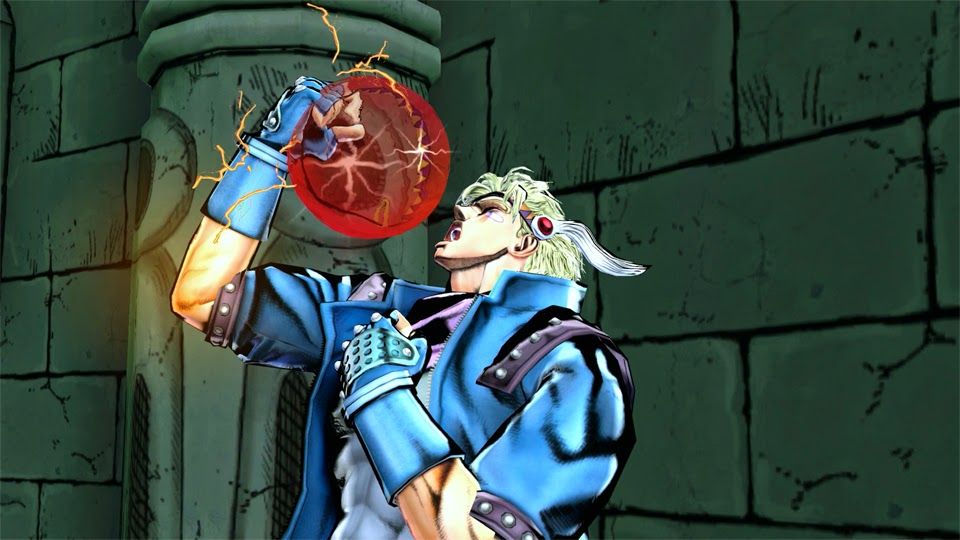 But while the story mode is amusing, the RPG elements also lead to some of the game's worst decisions. Each character will have almost no moves available to them until they've been sufficiently leveled, meaning that for the first few hours of the campaign, there's almost nothing at the player's disposal, making the combat even less fun than it is when everything is unlocked. It's also a huge shame that, for all the game's talk of having a story supervised by the manga's original creator, Hirohiko Araki, the plot really just amounts to "travel through time to beat up everyone." I'd actually be completely fine with such a basic story had it not felt totally drained of the energy that makes the rest of the franchise such a joy, without that, it just feels flat and uninteresting. Additionally, the mode suffers from some serious difficulty issues. With the grindy nature of the plot, every time I skipped one of the optional fights I found littered around the environments that can be explored between stages, I felt like I immediately became underleveled. Only a few fights felt genuinely difficult, however, with most just leaving me dealing too little damage, making fights drag on.

Outside of the story, however, this certainly wasn't a poor effort. There's an absolute ton of content to unlock, with new costumes, voice lines, and victory poses constantly being earned. The free play mode is a delight just for how easily it allows players to see the fanservice on display here, and the online is certainly serviceable, if nothing terribly special. One of the biggest issues lies in the fact that there isn't any form of local multiplayer, there's no reason for this sort of omission, and it just hurts the game overall. 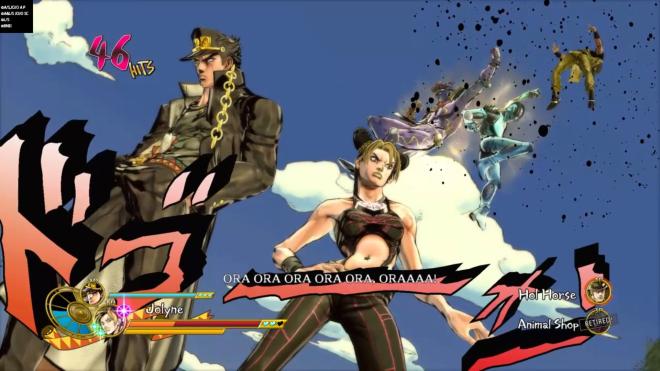 While it's not a terribly technically impressive game to look at, CC2 sidesteps this with an absolutely terrific rendition of the manga's incredibly unique artstyle, making each character look incredibly authentic. Animations are lively and fun to watch, and each stage is fun to look around and explore. The presentation of this all is absolutely the game's strongest suit, and it's great that the visual direction is so wonderfully handled. 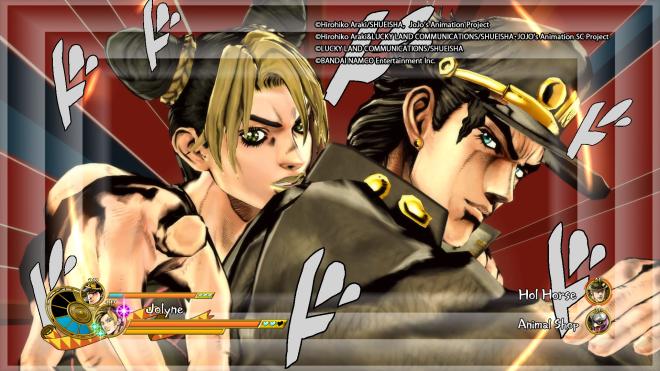 There's a jazzy, upbeat soundtrack for much of the game that works really well, coupled with more aggressive standard rock pieces. It's nothing terribly spectacular, but it's all fun to listen to and makes the game a fair bit more exciting. There's also a ton of terrific voicework here, too, and while there are discrepancies between the game and anime's cast, due to the currently airing Part 4 not being available when the game launched in Japan, every cast member throws in some excellent performances.

For those dedicated enough, there's a ton of incentive to keep going after the end of the story mode. Each fight is ranked, and getting the highest ranks will unlock costumes, victory poses, and plenty more. Additionally, the in-game shop (the game is staggeringly light on paid DLC, thankfully) is so packed to the brim it would take dozens of hours to purchase everything. Additionally, online and free play modes definitely add to the longevity. 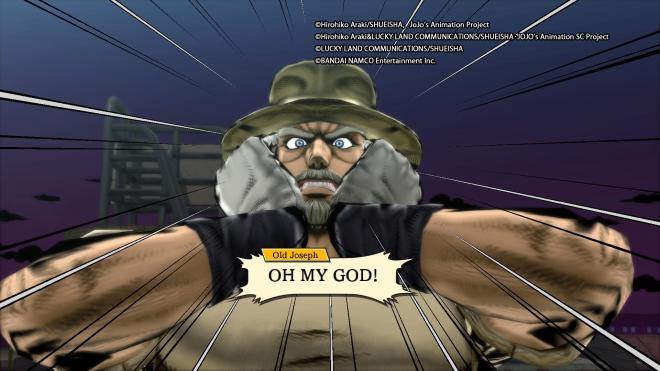 An absolutely terrific love letter to 'JoJo' that’s marred by being an extremely mediocre game. For fans of the franchise, there's enough love and care poured into this that it at least warrants a look, but for everyone else, the basic gameplay just isn't enough to make this a worthwhile package. The potential for a terrific 'JoJo' game certainly exists, and if CC2 ever steps back to the franchise, I'll definitely check out what they do next, but right now, this just feels like a bit of a misfire, a game designed with love for its parent franchise above playability.