The Game Itself
2.5 Stars
The Video: Sizing Up the Picture
3 Stars
The Audio: Rating the Sound
4.5 Stars
Replay Factor
2 Stars
Bottom Line
For Fans Only

The name 'Assault Suit Leynos' might not sound familiar to North American gamers, but it's actually a remake of the 1990 Sega Genesis title 'Target Earth.' The action shooter was applauded at the time for great music, a complex battle system and for having an actual storyline. Now over 25 years later, developer Dracue Software has remade the classic title for PlayStation 4.

After a brief introduction, 'Assault Suit Leynos' threw me right into the cockpit of a giant mech with next to no explanation on how to play. This baptism by fire immediately set the tone of my overall experience with the remake, and it's that the game hasn't been modernized all that well. My first few attempts at the game ended in less than 30 seconds as I commanded my mech suit forward and right into gunfire from enemy troops. This wasn't a great first impression, but it certainly reminded me of when I used to rent games as a kid and didn't have a manual to figure them out.

After the first few deaths I realized that I had to be more measured in my attack and advance slowly through the level. I constantly had to put up my shield in order to deflect attacks as my life bar could go from full to empty in a matter of seconds. The challenge here is unforgiving, as they game sends wave after wave of enemies after the player even when playing the easy mode. If nothing else, I appreciated learning the minutia of combat as I can't remember the last game that had me stuck on an opening level for a better part of an hour. 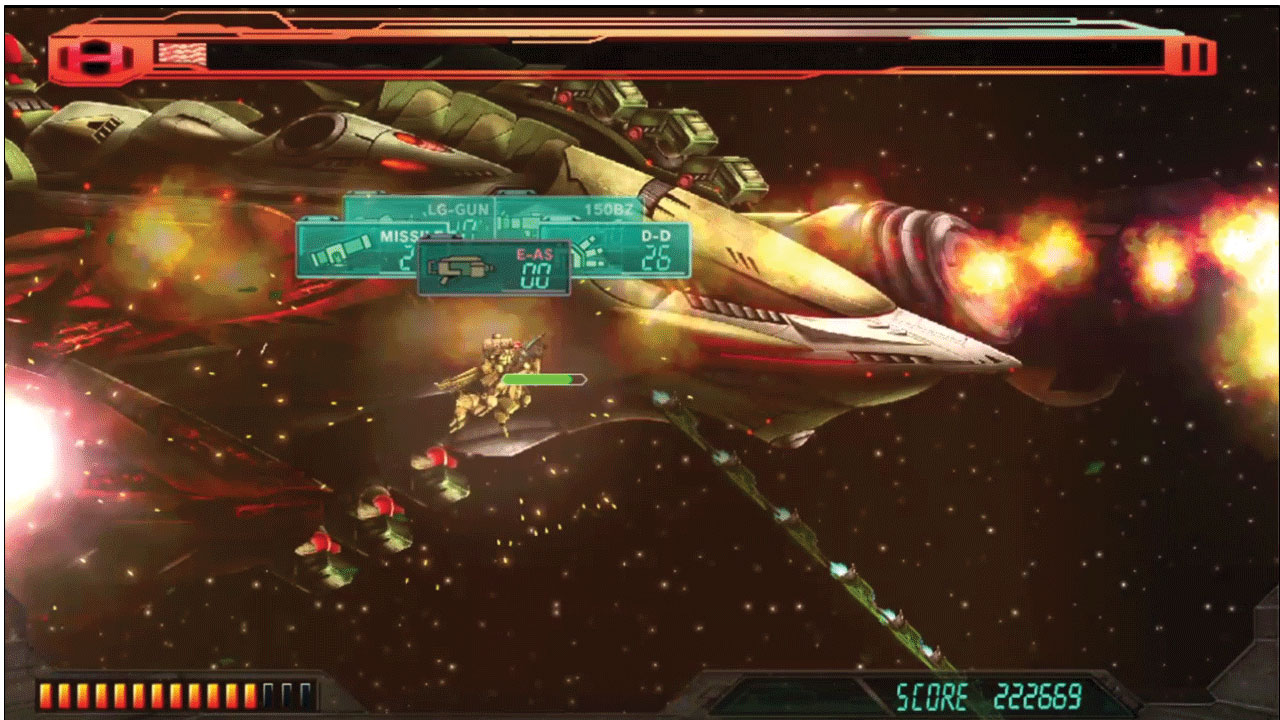 One of the reasons why it took me so long to get acquainted with how 'Assault Suit Leynos' plays (besides the lack of a good tutorial) was due to how dated the core design feels. Instead of using the left stick to move and the right stick to aim like the majority of shooters, both are done solely with the left analog stick. Pressing up and down on the stick adjusts the angle at which the mech fires, and it took a while for me to improve at quickly shooting down aerial units. There's a definite learning curve here, but it still feels like the control scheme would've been better off being retooled.

The shooter is largely faithful to the 1990 classic in its level design, and that's thankfully a good thing. Each of the game's eight stages play distinctly different from each other. Sometimes I had to safely escort shuttles on land, while other levels had me flying through space defending a giant spaceship until it could safely enter the atmosphere. The variety in design really stood out, and having a meaningfully different level to play kept me motivated even after my death count hit double digits. 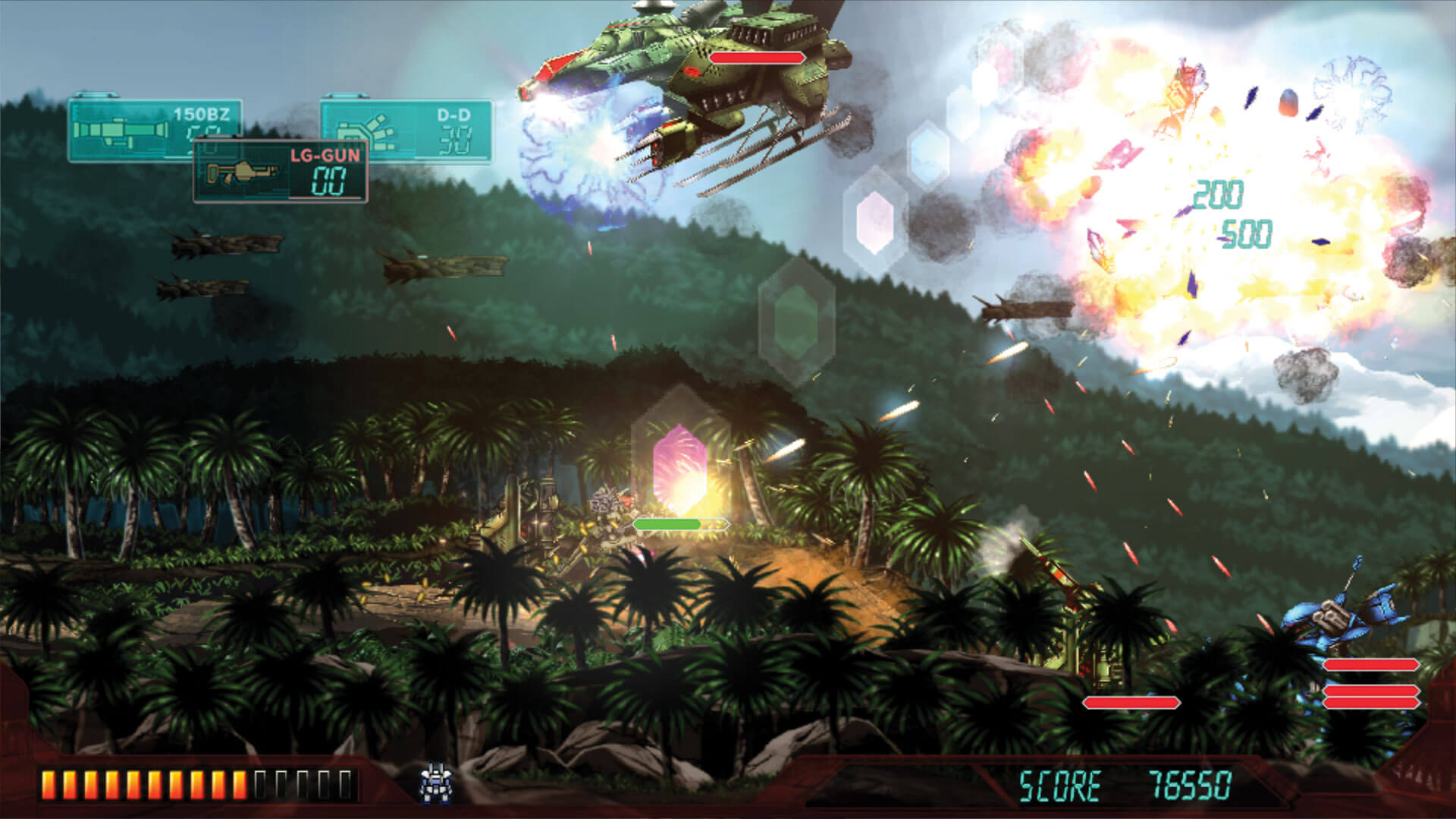 The variety also carries over to the combat, as there are a ton of different equippable weapons. I unlocked more weapons the better I played (which almost seems backwards considering I needed the more powerful weaponry when I was performing badly), and this was yet another area where the game could've done a better job at explaining its mechanics. When selecting a loadout before a mission, there's no great indication of how a weapon will react or what it does. This led me to multiple wasted runs where I was just trying to figure out exactly could my equipped weapons do. I eventually figured out which gun was a rocket launcher and which acted like a machine gun, but a little bit of explanatory text would've gone a long way.

While I certainly appreciate how Dracue Software tried to stay true to the original design, it's ultimately a 25+ year old game and it shows. As someone who only had a passing familiarity with 'Target Earth,' it quickly became clear that this would only really please those that played a ton of the game back in 1990. The design is unforgiving, rough around the edges, and just not all that enjoyable in 2016. 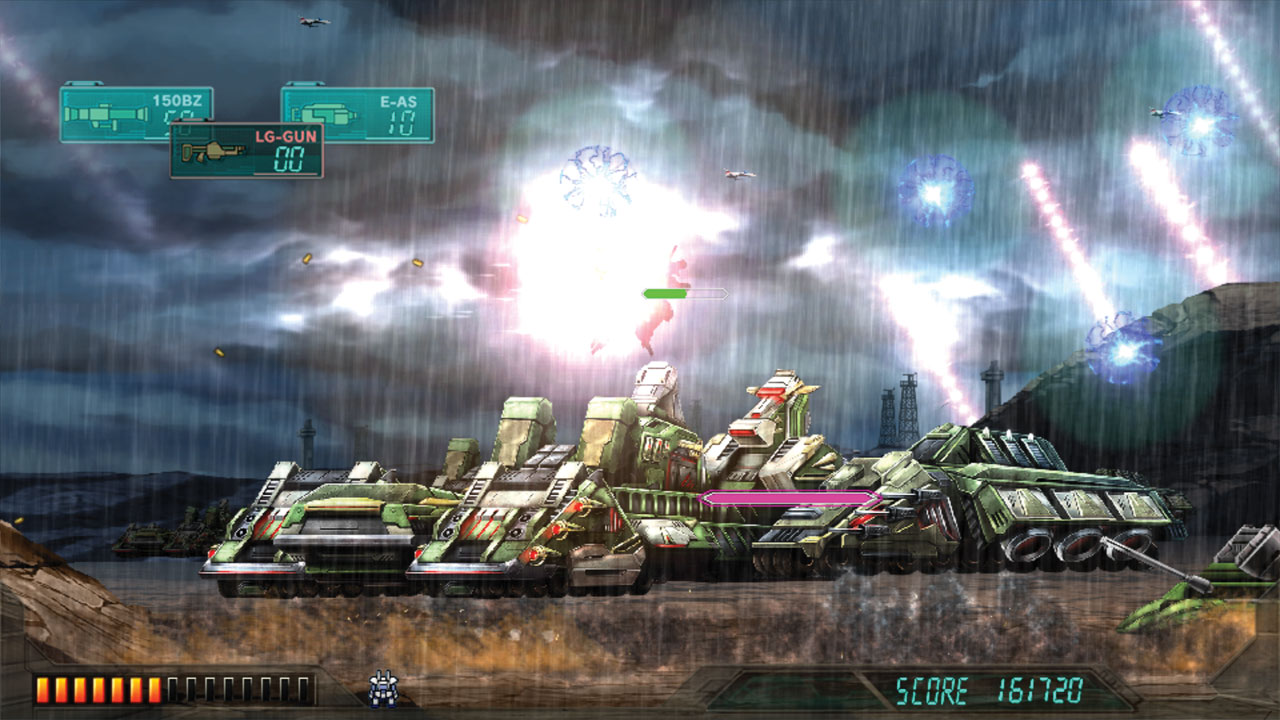 That said, the moments where I battled against both the controls and enemy mechas and came out victorious felt great. When I did so well on the game's second level that seven trophies popped, I knew that I had earned every one of them. These successes were rare during my playthrough, but I do have to admit they felt great.

For better or for worse, there are few games that come out in 2016 that are as difficult as 'Assault Suit Leynos.' While some of this is due to cumbersome implementation, it's also a difference of philosophy. It's a trial by fire that I didn't always enjoy, but it certainly reminded me how much gaming has changed since 1990 and mostly for the better. 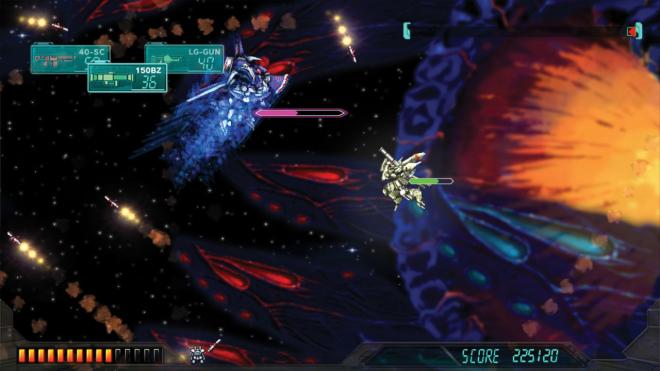 'Assault Suit Leynos' might not be super detailed like other 2D titles for PlayStation 4, but it does a really great job of evoking the original title's visuals. Everything from the backgrounds to the character designs has been redrawn and it looks much better. As someone who played the Genesis title (albeit sparingly), I got a real kick out of getting to see a modern day interpretation of what was going on. Those without nostalgia won't leave impressed, but it gets the job done. 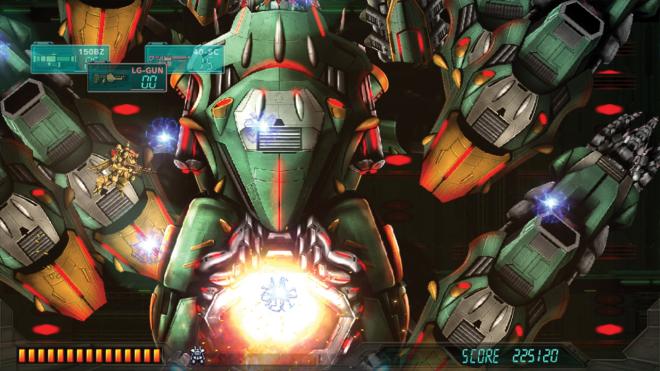 One part of 'Target Earth' that has aged well is the music. Both the original arrangements and remixed versions can be played. There isn't a bad choice as both provide great fast-paced rock infused themes that are a perfect fit for battling dozens of mechas.

There's also full voice acting for all of the dialogue. This is great since mission objectives change depending on performance and this helped me focus on the action instead of reading subtitles. I was also pleasantly surprised by the acting quality, as the actors always appropriately conveyed a sense of despair when a ship was destroyed. This helped the story come to life, even if it isn't a particularly captivating tale in 2016.

A skilled player can finish 'Assault Suit Leynos' in just over an hour. That won't be the case for most players, as it definitely wasn't for me, due to the intense difficulty. Every level took me dozens of attempts to try and sometimes when I succeeded it was by the skin of my teeth. While it is a short game, the trophies reward skillful play and there are in-game modifiers that slightly alter the arcade mode. There's definitely an incentive to jump back in and better your results once you've finished it, although I wasn't left wanting to play more. 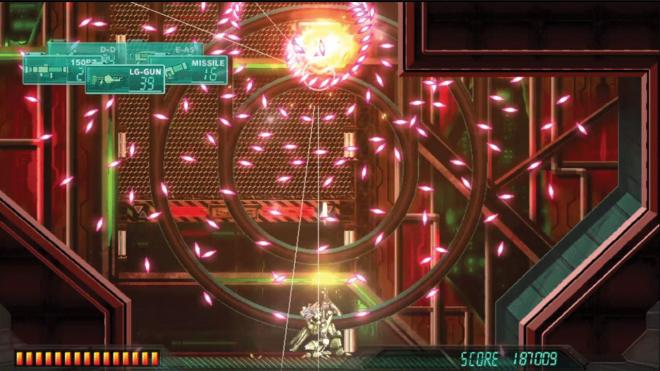 Fans of 'Target Earth' will find a lot to like in 'Assault Suit Leynos.' It's just as rewarding as the Genesis original, and the game has never looked better. Those without a sense of nostalgia won't find as much here to appreciate though, as even on easy difficulty its extremely difficult. This is one remake that has stayed too true to the original, as it plays harsh by modern day standards.