Digital PS4 version reviewed. 'I am Setsuna' is also available on PC (see here). The review is spoiler-free.

'I Am Setsuna' is the first title from Square Enix's new studio Tokyo RPG Factory, a developer that aims to make games that hearken back to some of Square's most beloved years, with this first title being a spiritual successor to the classic SNES game 'Chrono Trigger'. The game promises a sorrowful tale that sees players exploring a faraway, snow-covered land. Between the young Setsuna and her two bodyguards, all the trappings are there: inner strength, bravery, self-sacrifice and a promise for the people back home. It's a pilgrimage to save the world.

For all the pomp and circumstance surrounding 'I Am Setsuna', all the talk of how it's bringing back the "glory days of JRPGs", the final product isn't reflective of that level of pretense in the slightest, and that's entirely a positive.

Instead, what we have here is a very quietly lovely game, the kind of thing that rises above feeling like cynical cashgrab reliant on nostalgia, but a sweet, understated game built with a genuine reverence for its forebears. What 'Shadow Complex' was to 'Super Metroid' when it released, 'Setsuna' is to 'Chrono Trigger', the kind of game that asks why we don't get more games like that these days and sets out to just make its own interpretation of those ideas. This is by no means a revolutionary game, but it's possibly one of the most charming little RPGs I've played in a long while, and I can't help but adore it all. 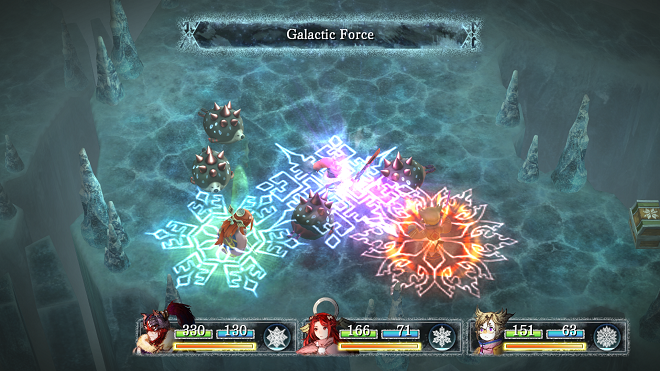 To put it bluntly, if you love 'Chrono Trigger', you should absolutely buy this game. For all intents and purposes, in terms of gameplay, this is the truest sequel we've ever gotten to that renowned classic. Everything, from the combat system that adds a position-based twist to standard ATB fights, to the combo techniques that allows party members to use two different attacks at the same time to form entirely unique skills, to the way encounters take place entirely at set points in each dungeon, feels directly like a mechanic from that game. That all said, despite how well 'Trigger' has aged, 'Setsuna' isn't content to just copy a template and leave it at that, so it places its own small tweaks that dramatically change up the flow of combat. In addition to the ATB system, as time passes, characters will build up SP. If a party member has SP, they will flash at the start of their attack animation, hitting a button at the right time allows one point of SP to be consumed and augment their move. Some skills might get a simple attack buff, while others might heal party members, or increase the duration of a buff, or even fill up the ATB gauge allowing a character to act again almost instantly. It sounds like a small tweak, but in practice, it saw me being increasingly mindful of SP above all else in most encounters, as smart usage of it can really turn the tide of any fight.

New techniques are acquired via the use of Spritnite, which is almost identical to the Materia system. As characters level up and new accessories are equipped on them, slots will open up allowing them to equip one of two types of Techs: Command Techs, which are basically any command used in battle outside of standard attacks or item usage, and Support Techs, which apply passive buffs to a character. Most slots can accept either one of the two, but certain slots only support a single type, so careful management of characters and their Techs is vital. I actually really like applying the basic Materia system to this kind of combat, as the increased focus on positioning and combo skills makes picking what to equip a much harder choice than it ever feels like in 'FF7'. It might be wise, for example, to focus on getting skills that draw enemies in to a single point to then deal with them all at once, but it's also not a bad idea to focus on keeping enemies away. It sounds small, but the freedom this provides in setting up individual playstyles and strategies is really nice, and limiting the resources available makes each fight feel just a little more strategic. These systems aren't without their flaws. The game buries a ton of important information behind a glossary that could really have stood to just be on the store screen while shopping for skills. There's also a Flux system that permanently adds effects to skills based on what accessories the party has equipped that feels greatly underexplained, but most of the issues feel like small gripes at the most. 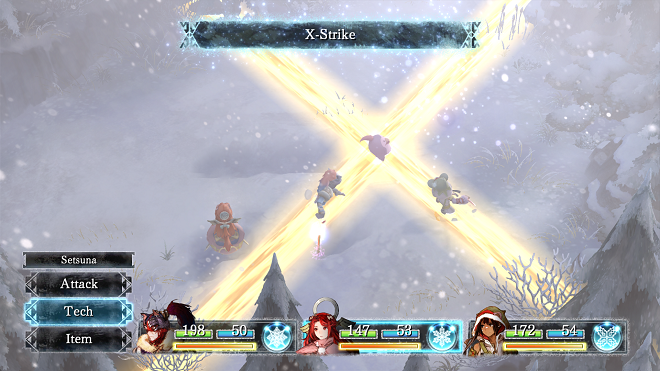 But all these battle mechanics would be meaningless if the game couldn't keep everything else interesting, and thankfully, it manages that with aplomb. Despite the game's snowy aesthetic, none of the dungeons end up feeling dull, thanks to some excellent art direction and incentives for exploration. Wonderfully, the enemies are, with a few exceptions, a delight to actually battle thanks to their AI. Just about every enemy type will have entirely unique behaviors that demands dealing with them differently. Some might blow up the moment they are killed, making it a priority to get them away from party members, while others might call in allies if they see a member of the same species get killed. None of this is terribly new to the genre, but it's a small facet so many games overlook, and it goes a long ways to making sure random encounters don't feel like something to just button mash through. Their designs are similarly fantastic, making almost every monster cool to just see. The game's take on a standard bomb being one of my favorite monster designs in years. There are, unfortunately, more than a few palette swap enemies, but even then, their behavior in battle is tweaked enough where they'll often feel fresh.

If I've not mentioned the story much, it's because in spite of it being somewhat generic, it's the kind of thing that I feel works best when experienced almost blind. The basic premise rings highly of 'Final Fantasy X', with your party guiding a girl to be sacrificed to prevent the world from being destroyed, but it deviates in smart ways that keep it feeling fresh. Thankfully, despite the game's overarching themes of sadness, it knows to inject enough humor into everything to avoid it become depressing. It's a traditional yarn, to be sure, but likable characters and a terrific localized script give it enough breeziness that it never feels dull, and the game keeps up a snappy pace that greatly works to its benefit. While it isn't a terribly long game (the average run should take about 25 hours or so), this ends up meaning the game never really wastes any time with its story, which I greatly appreciated. 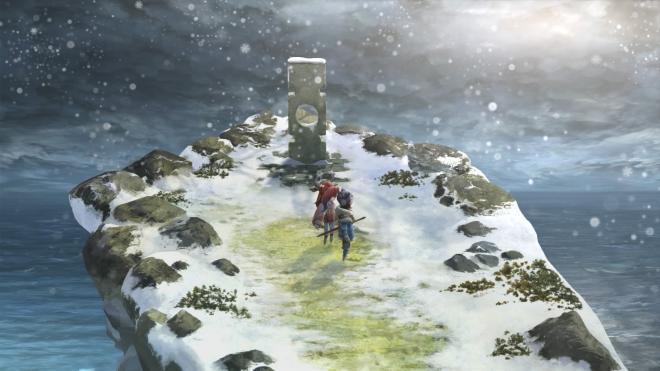 Like 'Bravely Default' before it, 'Setsuna' does a great job with the limitations placed upon it. While the game clearly has a low budget, the developers hide this using the absolutely gorgeous art direction. The snowy aesthetic can at times feel repetitive, but it lends the game a striking look and feel, and the first time I saw snow falling off a tree, revealing the color of its leaves, it was utterly charming. Character models are extremely simple, but they animate surprisingly well and feel endearing, rather than simply cheap. There's a pleasant, painterly style to it all that I ended up stopping to appreciate on quite a few occasions. There's some unfortunate jagginess and stuttering during certain visual effects and spells, but it does ultimately feel minor, and never inhibits the gameplay. 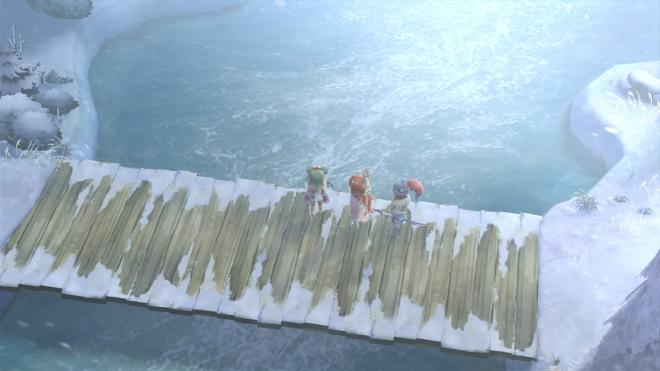 'Setsuna' has such a lovely, low-key soundtrack that works so incredibly well with the game on a thematic level while still providing some really catchy tracks. Every single song uses nothing but the piano, yet there isn't a single one that doesn't feel ultimately distinct. It's absolutely beautiful in its greatest moments, and sticking to a single instrument has led to prioritizing memorable, interesting melodies over simple walls of sound. It's an absolute joy just to stop and listen to the game, and the music greatly enhances the somber tone it often strives for without feeling overbearingly sad. There's some extremely light voicework in battles only, which I understand, given the era the developers are trying to evoke, but it does feel like a bit of a shame. That said, the soundwork outside of that, from the beautiful score to the effects that make the game sound as cold as it looks, are absolutely wonderful outside of that.

There's a surprising amount of hidden secrets to be found, including an homage to one of the greatest easter eggs in 'Chrono Trigger', and getting everything done could easily double the length of the game. That said, there's no real new game+ mode, and the game relegates its bonuses to post-game content. It's ultimately a bit of a shame, as i feel NG+ should just be an RPG standard at this point, but it doesn't really hurt the game all that much. 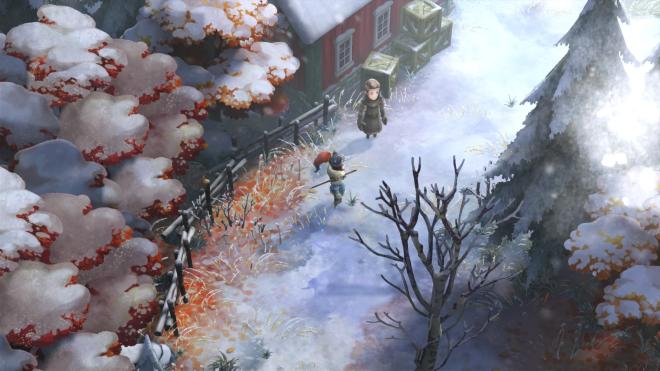 A lovely little low-key JRPG that feels like the work of a small, passionate indie developer that just wants to pay homage to the classics it looks up to. 'I Am Setsuna' isn't a revolutionary game or a rebirth of the genre, as the marketing seems to imply. What 'I Am Setsuna' ultimately ends up being is a remarkably well-made, charming game that's endlessly endearing and entirely devoid of cynicism. While some small gripes certainly sting a little, this is a terrific debut for Tokyo RPG Factory, and I absolutely can't wait to see what they make next. For anyone who misses the SNES era, it's a great throwback, but in its own right, it's a fantastic game that absolutely shouldn't be ignored.