The Game Itself
4 Stars
The Video: Sizing Up the Picture
4 Stars
The Audio: Rating the Sound
4 Stars
Replay Factor
3.5 Stars
Bottom Line
Recommended

NoClip is a new and very small developer based out of Marseille, France. In partnership with Gambitious, Inc, NoClip's first game is 'Zombie Night Terror.' 'Zombie Night Terror' takes a very zombie movie approach to a PC classic, 'Lemmings.' Of course, it wouldn't be much a of zombie game if there weren't humans.

Humans then are one of the game's biggest obstacles, and, at the same time, one of the player's most important resources. Spreading the zombie apocalypse requires lots of warm bodies.

Ever since I first played 'Zombie Night Terror' at PAX South 2016, I've been looking forward to playing the full game, and to conquering each of the game's 40 levels. And after enjoying the final product as much as I have, I'm left wondering what specifically it is that initially hooked me and has kept me hooked through some lengthy and challenging levels.

For sure, it's a charming game. From the monochrome looks to the dastardly characters, there's some very wry humor at work, and it mixes well with levels that require lots of thinking, as well as some deft movement. I could, at length, talk about 'Lemmings' and how this game is like a violent Halloween take on that classic. But really, this is a very PC game. It has that special brew of mouse, keyboard, and gameplay. (It's definitely not an especially politically correct game. I think Robert Rodriguez's 'Planet Terror' is a good reference point.) 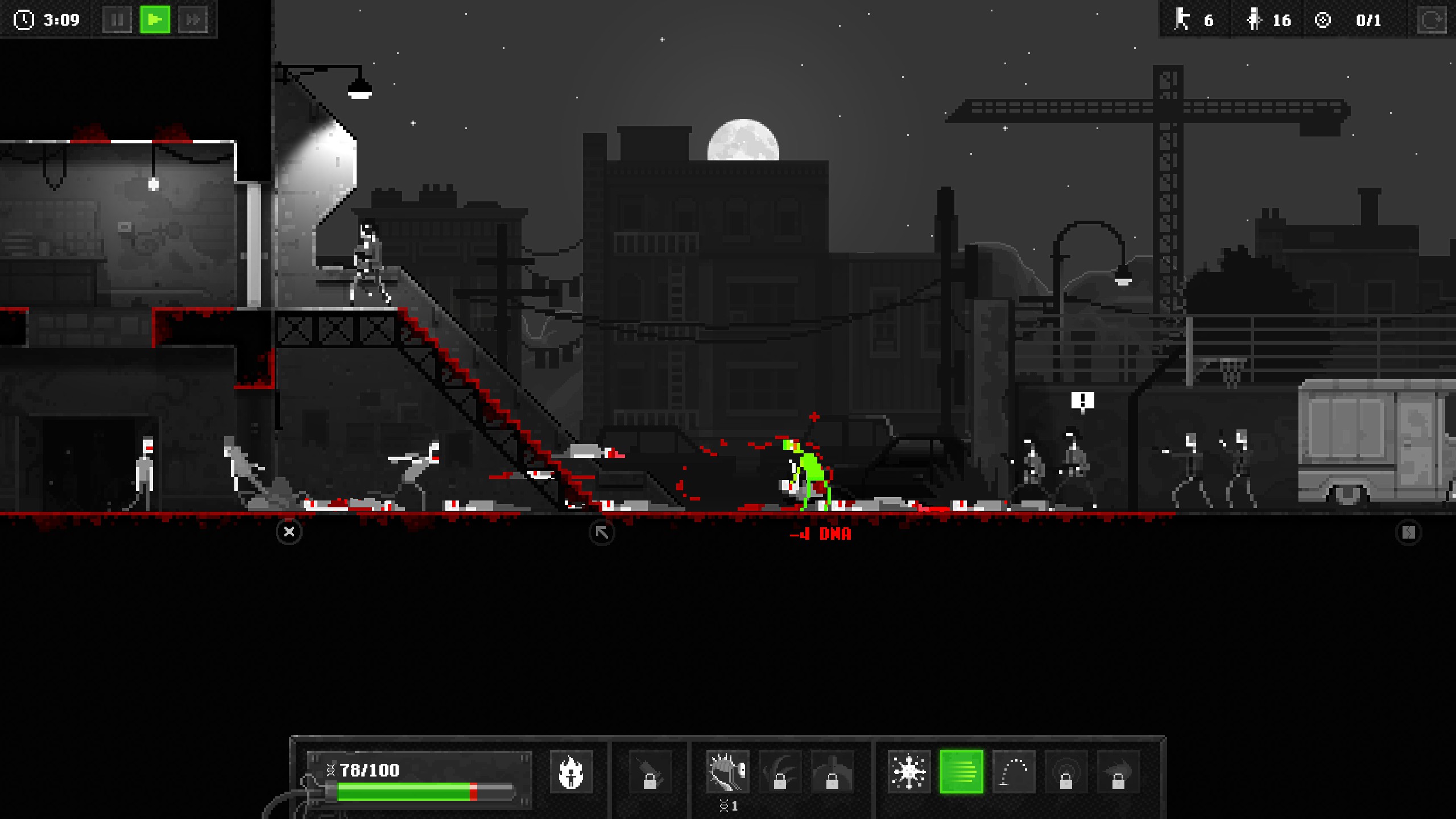 While I love that the game captures a special PC game quality that is all-too infrequently seen in the past decade, it's possible that this game could be made to suit touchscreens. It may even have begun as a touchscreen game. Either way, this a game where orders must be given carefully and quickly, but while precise execution is usually rewarded, there is enough flex to engage a player like myself, who tends to alternate between overly cautious and suddenly aggressive. I'll try to explain the gameplay. Like a real-time strategy game, the player directs zombie units. The maps are 2D and the action occurs from a side-scrolling point of view. The zombie units have their own predictable behavior, and in 'Lemming' like fashion must be directed rather than directly controlled. A large, unprotected drop-off will lead to a wandering zombie's death. Worse, it could lead to a stream of zombies flying to their death. My options as player are typically to pause the gameplay, take one zombie and make him an Overlord that directs zombies in opposite direction of the pit, or I can try to fling them over, or I can change them into an agile crawling zombie that can both survive falls and climb walls. I can make an Overlord fling all approaching zombies to a great height or I can make an Overlord scream in a way that attracts nearby zombies, keeping them from wandering off. I can even try to speed up the zombies, which will change the arc of their descent, which might be enough. Makes zombies and Overlord zombies explode might also get some of them over the gap. Doing just about any of these things will deplete my mutagen resource. To refill it, I can, one by one, set zombies to self-destruct, and thereby refill a small amount of mutagen.

Oddly enough, as much as it bothers me to see my zombies falling into pit and being bashed to useless pieces, I can "make more" zombies by infecting whatever humans are in the level. (A bite from one of my zombies is the best way.) There are entire chase levels were the trick is to keep infecting the next human or human group while any trailing zombies are obliterated by something as dauntless as a subway train. 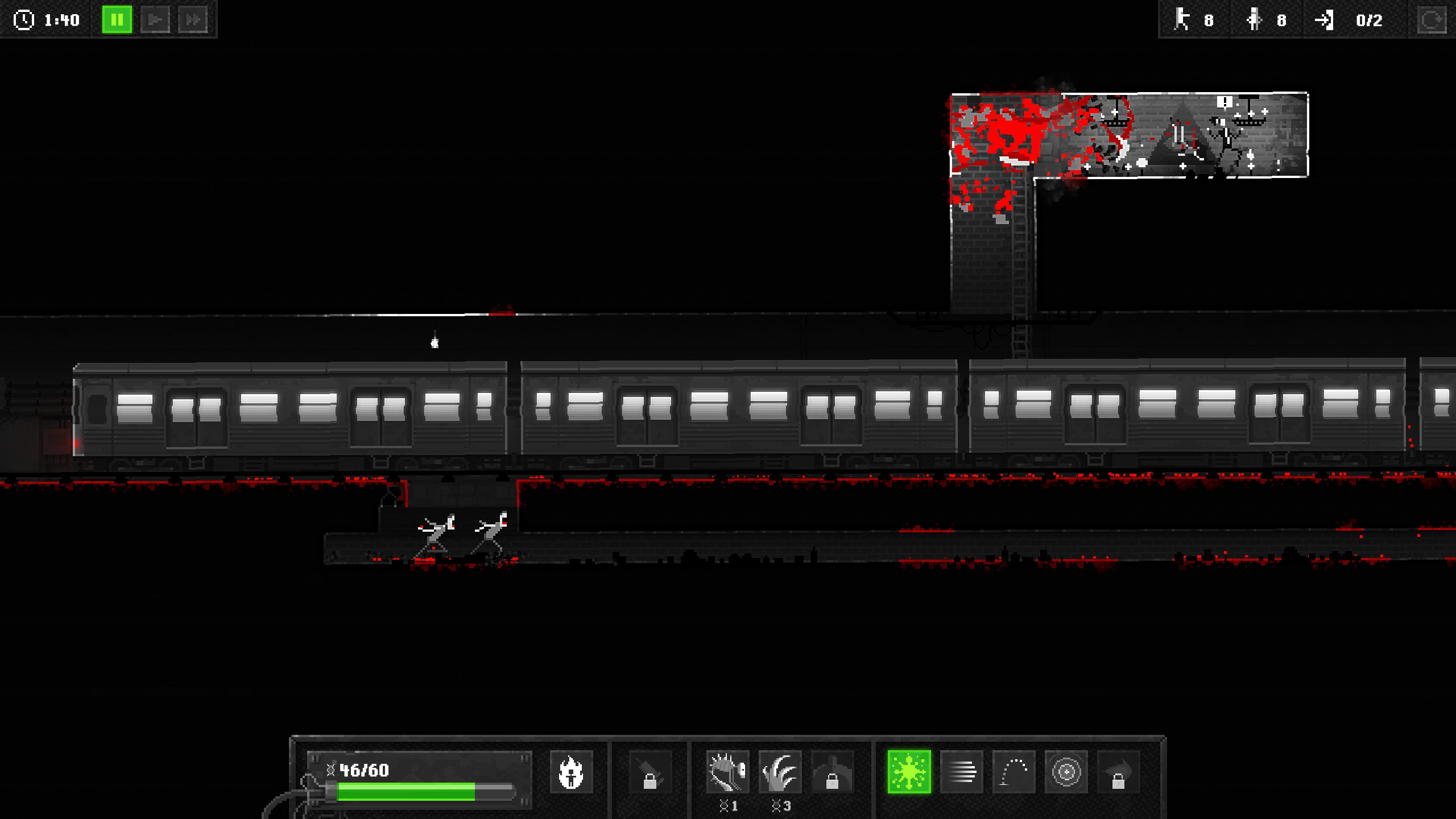 Each level has a progression goal of getting one or more zombies (or special zombie types, like tanks) to the exit. Each level also has a single stated challenge goal, and these can vary greatly. Some are time-based, which is tough since time runs even when the action is paused. Some require that all humans in a level be killed (infection counts), but others are more specific. Finding hidden rooms, killing the cannibal, stopping a time-travelling killer android, and so on. This constant extra challenge helps to kick up the challenge level and can bring out the often brilliant and tricky design

For example, in the Terror in Elevator level, beating the level and going for the level-specific "Unpaid Overtime" kill all humans challenge, took some doing. Towards the end, I used the crawling type zombie to get a hold of a rare zombie infection item. This syringe lets me infect any single human in the level. I had two syringes, and so I infected a gun-toting human that had walled himself up behind a one-way door. That left a group of four humans protecting a power junction. Two carried machines and the other two were heavies. None of my loose zombies could get close enough to break that defense in such tight confines, but with my remaining infection syringe, I infected one of the heavies. He transformed into a basic zombie, which wouldn't be much of a challenge for the three remaining well-armed humans, but by carefully pausing and unpausing the action, I could be quicker. The moment he turned into a usable zombie, I had him scream, which temporarily made the other humans pause in fear. I then turned the screaming zombie into an Overlord, and blew him up, which killed the other three humans. As they rose again as zombies, I directed them to take out the power junction. (I could have blown up the zombie without first making him an Overlord, but the Overlord has a much bigger blast radius which I needed in order to hit all of the humans.)

To pull off this maneuver, I had to unlock all of those abilities, which is typically done in-level. I also needed to have enough mutagen in reserve so as not to run out. Running out of mutagen, even for a moment during that sequence, and I would have blown the level.

That is my greatest love/hate aspect of the game. Even with pause and fast forward options, an entire level's progress can be wasted in a moment's miscue. The game, the levels, etc. can be surprising in both good and bad ways. Collision, like when flinging around crawling zombies, is not always pixel perfect. Trying to pick a specific zombie out of cluster can be tough, and can cost a hampering amount of mutagen. (I often wished for a rewind button.) In one of the game's boss fights, I had to get my zombies by some very Donkey Kong-like barrel throws. Unfortunately, flying barrels, bullets, and so on, tend to become box-shaped in collision terms, which I had to adjust to. This boss fight has multiple phases, and the final phase gave me real trouble as it seemed that the (expensive) zombie screams stopped working mid-fight. The boss would then destroy my carefully kept horde of zombies. What I found after several frustrating, level-long attempts was that I was sending too many zombies at the boss. By keeping most of my surviving zombies penned up, the boss maintained her vulnerability to the zombie shriek.

I found the game was better when it wasn't specifically focusing on one new zombie ability and instead letting me have the whole set to play with. This takes a long time to get to, and I could have done with fewer platforming puzzles. Still, just when I thought the game had shown its hand, it continued to surprise. I doubt any fans of 'Portal' would not smile when faced at the inspiration on display during that part of the game. 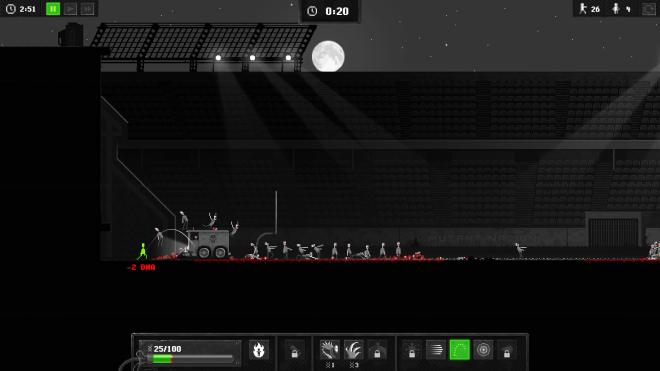 I'm clearly a sucker for a good use of grayscale. It's not a beautiful game, and I'm sure a bigger team could achieve more visually by applying more character detail and animation, but what we have is a success. The levels are basically flatly lit, but the environment detail and touches have been spread out in a rewarding way that only cultivated design (and not procedurally generated) can achieve. The simple stadium level bears out this less is more style as well as almost anything in the game. Naturally, the simple characters let the gore be cartoonish. 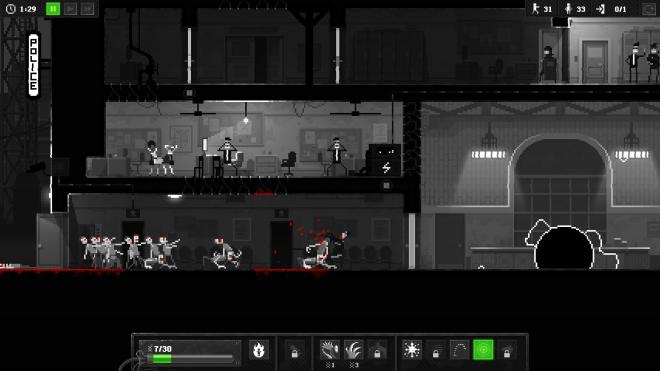 The music is good, and doesn't grate. There's only some Charlie Brown like muttering and few screams and explosions beyond that. Sounds are kept to being mainly useful audio cues. Like the overall game, there's little to distract the player during a level. While getting the challenges I missed seems like an obvious attraction, I think I would prefer just playing the whole game or certain levels over. That might be because I want to try a different or more flawless execution for a given level or else, I else I expect to wait until I forget the specifics of the mechanics and can experience it again without instant solution recall. For me this marks the game as more attractive in terms of replay than most puzzle-heavy games.

The first time through was not short for me. I was expecting just a few hours of play, and I got much more than that. A speedrun would be pretty quick, however. 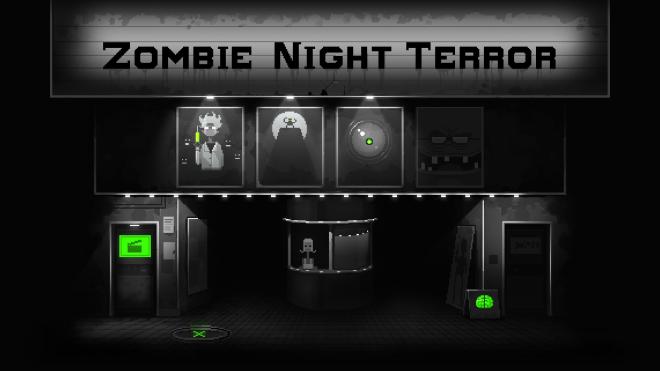 'Zombie Night Terror' makes for a delightful challenge, one that is worth revisiting in the future even after conquering all of the levels. Many of the human characters in the game are in need of grisly end, and zombies are certainly primed for that. The game falls short of excellence, but it's still an easy recommendation for anyone who might enjoy an action-puzzler with zombie b-movie humor.