The Game Itself
3.5 Stars
The Video: Sizing Up the Picture
2.5 Stars
The Audio: Rating the Sound
3.5 Stars
Replay Factor
4.5 Stars
Bottom Line
Worth a Look

Digital PS4 version reviewed. The review of the original PS3 version of 'Fairy Fencer F' can be found here.

Compile Heart's 'Fairy Fencer F' hit the PS3 back in 2013 (Japan) and 2014 (North America). This battle-heavy RPG features weapons cast by a god and a goddess. These power-imbued weapons have become furies, and are now, in the time of the game's story, wielded by warriors. These Fencers must naturally not only fight each other, but must also strive to find more (and more powerful) examples of these ancient and mystical weapons.

'Fairy Fencer F: Advent Dark Force' not only features upgraded visuals; it also features three story paths to play. The battles can now feature six characters in total at a time, which is a big change coming from the PS3 version.

The original 'Fairy Fencer F' is a game I have a fair amount of fondness for in spite of its stumbling blocks. It was a tad too light on content, it had systems that felt almost entirely like the remains of scrapped ideas, and was far too easy for its own good. That's why I was really excited when 'Advent Dark Force' was announced as an enhanced version of the original game with a ton of changes and improvements. For all my issues with the original, most of them aren't the sort of thing that would be terribly hard to fix up. 'Advent Dark Force' is, no doubt, the best way to play this game, it's just a shame it didn’t go quite as far with its improvements as it should have.

The game immediately differentiates itself from the original with its very first dungeon. Within minutes of starting the game, protagonist Fang is thrown in prison for stealing food, searching for a way to escape. In the original, the game simply cut to the aftermath of the breakout, but here, the prison is an entirely unique area. It's also a dungeon with honest to goodness puzzles, something the original sorely lacked. These puzzles are extremely basic, largely amounting to "find the right key to open certain doors", but when the original basically just had wide hallways, it injects variety in a really nice way. My first impressions were terrific; I had extremely high hopes for the rest of my time with the game. 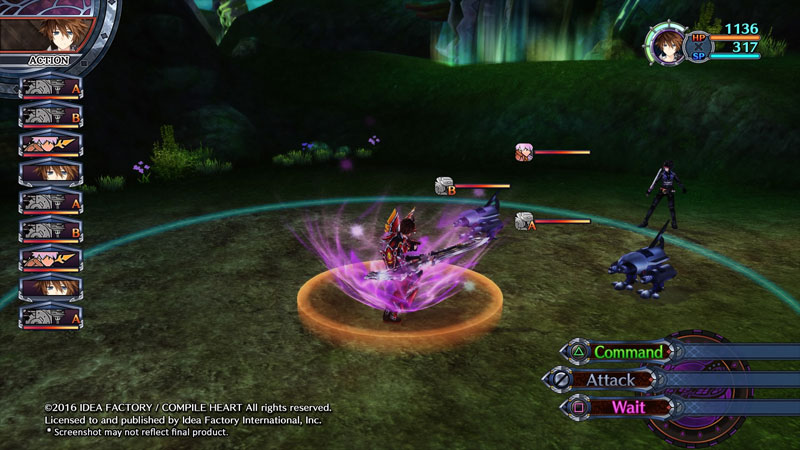 Then it just sort of stops changing things, and for about 15 hours, you'll be playing almost the exact same game as the original. They might toss in a new cutscene here and there, and there are tweaks to the combat system that make the game a lot more enjoyable, but structurally, it's a shame it starts with such a radical change only to quickly feel like its run out of steam. The game's main draw lies in its branching story routes. Where the game originally had one basic plot with two slightly different endings, 'ADF' has three extremely different stories. At a certain point in the game, depending on actions you've taken, the game will radically change the plot from that point onward. Characters who were party become enemies, protagonists may change entirely, and new dungeons and content will be unlocked. Getting into the new stories is really great, and definitely gives the game the sort of content it needed back with its original release. The game's basic plot, which revolves around people hunting down magical weapons called Furies to try and resurrect either a benevolent goddess or an evil god to alter the course of the world, is a decent little yarn. It's incredibly traditional, and sometimes falls victim to poor pacing, but it works well enough, and the new routes definitely add plenty of originality, making it a far more enjoyable experience overall. Thankfully, even without the additions, the game has a likeable cast and a genuinely fun sense of humor that makes the whole package a great deal more charming.

The big issue, however, is that the game never really clarifies how to actually access these new routes. The first time I played through it, I wound up on the original game's story path, which adds nothing new whatsoever, making me restart the game just to access everything new. I had a save file from before the big branching point, and could still technically fulfill the requirements necessary to see the new stories, but not only are the requirements obtuse, they're also time sensitive, meaning I'd been locked out for not doing something early enough. The game gave no indication of this being the case, but on my replay, where I did nothing different save for doing one task earlier than I had before, I wound up on a new route with no trouble. The worst part is that it's all tied into a game mechanic that had no impact in the original game, leading me to believe it's simply adding in scrapped ideas from the original. Still, the new content is nice, and different enough, that it was ultimately worth the effort. It's these new stories that add in the most interesting dungeons, toy with the basic mechanics in the most interesting ways, and are ultimately more worthwhile to experience than the standard plot ever was. 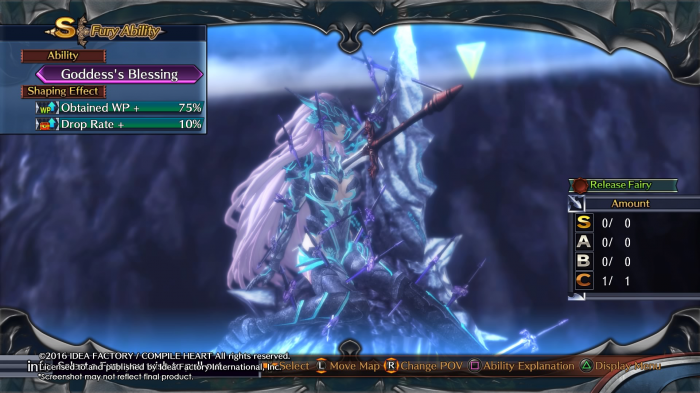 Despite all this, 'Advent Dark Force' is actually a pretty fun RPG with some good ideas, even if the game doesn't quite execute them all extremely well. The combat system is a standard turn-based affair with some added position-based mechanics, where each skill that each character can use will have a different area of effect, meaning that most battles are best won by trying to group enemies together to kill them as quickly as possible. New to this version of the game is a part breaking system, where hitting enemies from the correct angle will break off parts of their bodies, earning extra experience and items, as well as dealing a bit more damage. Additionally, where the first game only allowed for parties of 3 in any battle, this version ups the cap to 6. I was worried this would mean the game would seem too easy, but if anything, the difficulty has been ratcheted up a great deal, which is fantastic. The first game eventually became completely thoughtless as fights gradually became easier, but 'Advent Dark Force' is a surprisingly tough game, reaching 'Shin Megami Tensei' levels on Hard Mode, but remaining a fairly stiff challenge even on easy. It keeps the combat far more interesting and tactical, and makes the whole game a lot more fun overall. 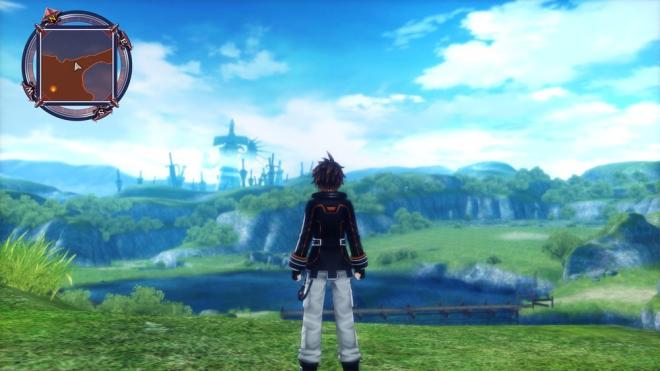 The original 'Fairy Fencer F' was a dull game to look at on PS3, and the same is true on PS4. The game now runs at 60FPS, a far cry from the often laggy original, but it's a flat, visually bland game for the most part. There are some great animations during combat, particularly during the more intricate attacks, and the character and environmental artwork during cutscenes is pleasant, but that's about as good as it gets. 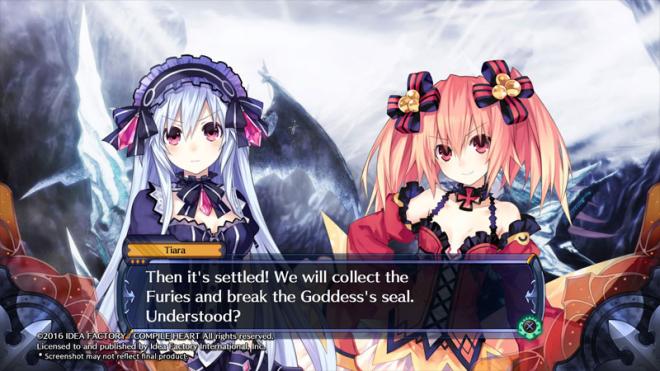 Though it boasts a soundtrack by 'Final Fantasy' veteran Nobuo Uematsu, the music here is largely fairly generic, with Uematsu himself having only contributed a handful of tracks. There are some excellent battle themes though, and a couple of the vocal tracks are so unabashedly silly and cheesy that I can't help but love them. The voicework is surprisingly strong in both English and Japanese, though the English dub does have far fewer voiced lines overall.

There's a ton to see and do even after the credits have rolled. the new story routes mean that there are essentially three very different plots to play through, with each having exclusive characters, costumes, and dungeons. Additionally, there are post-game dungeons to explore and a new game+ mode that allows characters from one story route to be used in the others, so there are plenty of incentives to replay the game. 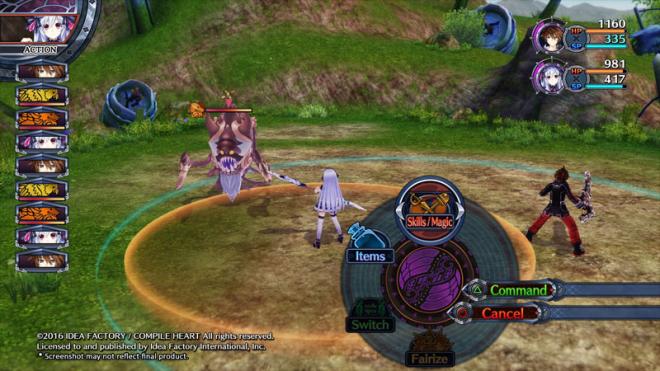 Though it more often feels like a Director's Cut than a true remake, 'Advent Dark Force' nonetheless turns a flawed PS3 RPG into a stronger experience overall, making it the absolute best way to play 'Fairy Fencer'. The story has been made a great deal more interesting, playing with concepts that the original only hinted at, and the combat has been given a big shot in the arm thanks to the expanded party sizes and rebalanced difficulty. The game's biggest issue is that it feels like it could've been improved a great deal more than it has, leaving us with a game that's good, but falls just short of greatness. Still, it's a worthwhile adventure that lays down enough strong groundwork that could lead to a truly excellent sequel.