The Game Itself
3 Stars
The Video: Sizing Up the Picture
3.5 Stars
The Audio: Rating the Sound
3.5 Stars
Replay Factor
3 Stars
Bottom Line
For Fans Only

The beloved 'Extreme VS' series finally debuts in English with 'Extreme VS-Force', the latest game in the series and its first entry on PS Vita. Pilot over 30 different Mobile Suits, many of which are appearing in the series for the first time ever, and experience a recreation of the franchise's defining moments in the all new single player Extreme Force mode.

'Mobile Suit Gundam', being one of the largest media franchises in history, was always going to get a deluge of licensed games. Many of them content to just be mediocre cash grabs (or downright terrible, as is often the case), while others genuinely strive for excellence and occasionally reach that point. Perhaps none of them shine brighter than the 'Extreme VS' series of 3D fighting games, something of a spiritual successor to the Sega class 'Virtual On', seeing teams (usually of 2v2) duke it out in huge battle arenas. Though it's a fairly unknown quantity in the West, it's gained enough popularity through imports and fighting game tournaments, that it was high time to see one of these released in English. While it's hardly fair to say that 'VS-Force', the Vita spinoff entry in the series, is a bad game, it's still a shame that this is the one that's been localized first. 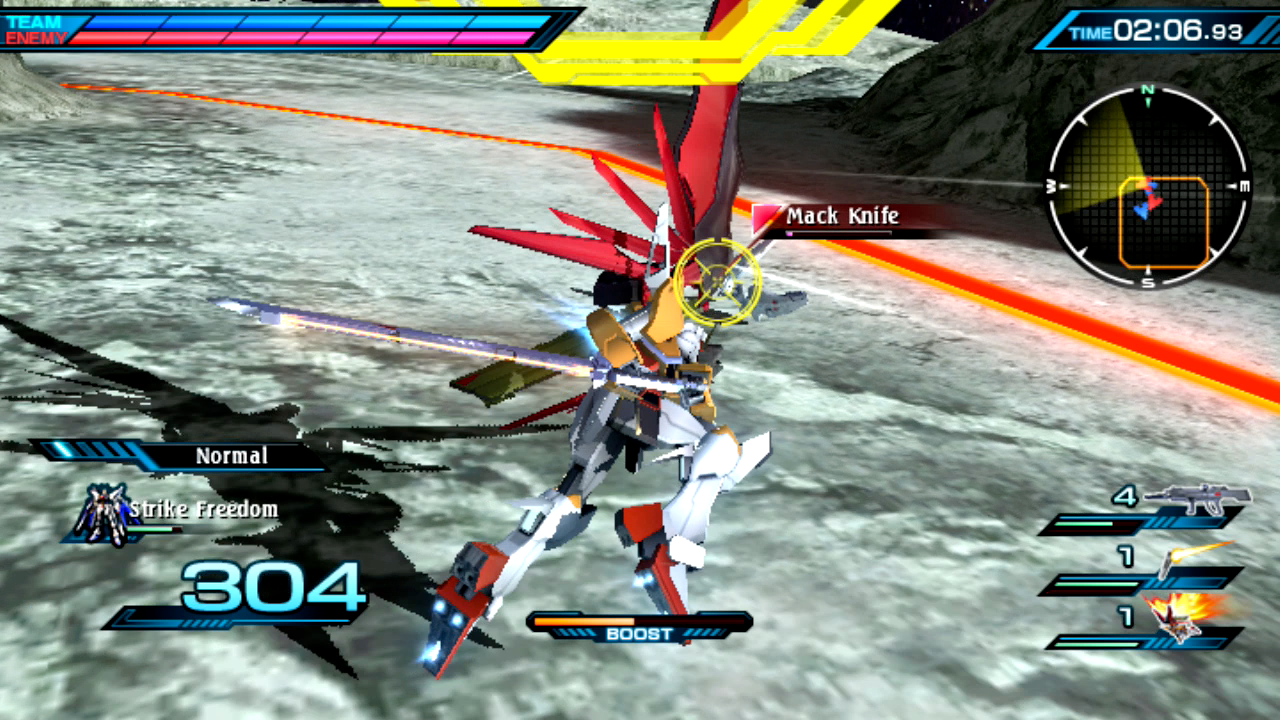 As a basic introduction to these games 'VS-Force' is actually pretty fun. The core mechanics are genuinely great, and fighting feels fast and fun. While the movesets available to players aren't as complex as in other fighting games, the simplicity actually ends up working in its favor, leading to a game that's approachable, but still offers plenty of depth. Each playable Mobile Suit has just a few commands at its disposal: Melee and ranged attacks, dashes and long range boosts, a couple of special moves, and blocking. The first time I ever started one of these games, I actually found it a tad dull, thinking it was limited and empty, but persevering lead to me discovering that each and every suit feels almost wholly unique. Some characters may forego ranged attacks entirely, instead replacing guns with huge lunges forward, some may have alternate methods of guarding or even transformations into entirely new suits with entirely new movesets. My personal favorite Burning Gundam (or God Gundam, in Japan) is entirely about punching as quickly as possible, but I also grew to love suits such as Sthesia Excellia, which throws knives and shoots out small spheres that hone in on enemies. There are over 30 suits available, and it's great that they all feel as different as they do.

There's also a surprisingly hefty single player campaign that changes the game pretty dramatically from a fighting game to something of an action-strategy game. There's a loose story about AI trying to recreate historic battles, basically an excuse to just run through fight scenes from the shows, but it's nothing terribly important or interesting. If you're looking for a competent retelling of the shows, this isn't a great place to look, as the presentation of it is fairly bad, and the plot seems to just want to rush through the source material as quickly as possible. That said, the campaign leads to some interesting gameplay, seeing the player cast as something of a commander of small squads of units, with up to 6 Mobile Suits on a side, and smaller grunt units backing up each team. The missions primarily task players with capturing points found across the maps the wipe out enemy forces. Light commands can be given to each squad, so that multiple points can be focused on at once, or single targets can be destroyed one at a time, creating a more secure defense. 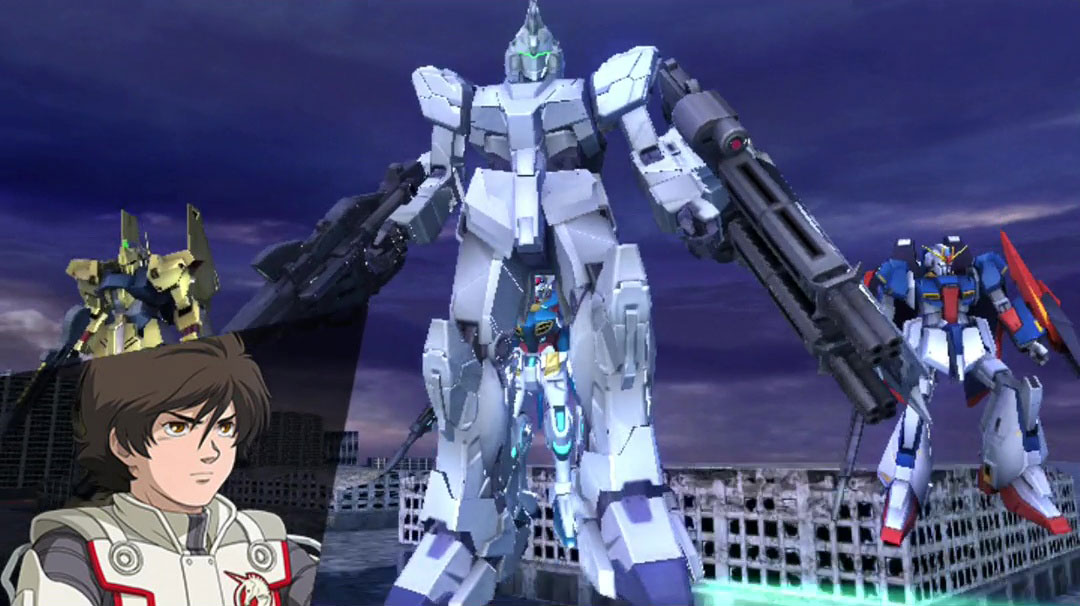 The missions do vary a fair bit, with some tasking players with defending a single point from massive onslaughts, or simply battling through a 1v1 fight, or even taking down massive warships. Additionally, each mission has a variety of sub-objectives that earn Haro medals, which unlock further missions, suits to use, or raise the cap on the number of units that can be taken into fights. They can be pretty hard, but earning the medals really extends the longevity of the campaign mode. It's surprisingly varied and fun, honestly, and I hope a similar mode returns in later 'Extreme VS' games.

But that's where most of the praise for 'VS Force' ends. There's clearly been a lot of focus placed on the single player campaign, while other components feel woefully underdeveloped. While a roster of 30 is nothing to scoff at, previous games in the series had over 100 playable characters (even the PSP entry had more than what's available here), and, unforgivably, there's no online multiplayer to speak of whatsoever, killing one of the biggest reasons to really play these games. When it launched in Japan, the game didn't even allow you to simply get into basic fights with the AI, only having the campaign and local multiplayer options. Thankfully, the version we've received in English has a free battle mode patched in, and contains additional suits added for free after launch in Japan, but it's still very clear that this was a rush job. It's a massive shame, too, because the team here is working with a terrific base for an incredible fighting game, but outside of the campaign mode, this almost feels like a demo for a much bigger game. While it's always great to be able to take a game like this on the go (this is, in the content it does have, a very good port of the systems seen in the console entries), it's sad to think about how good this could have been. I can only hope that Bandai Namco chooses to localize a better, bigger entry next time, as this is an incredibly interesting series that absolutely deserves to see success in the West, but this is a poor way to start things out. 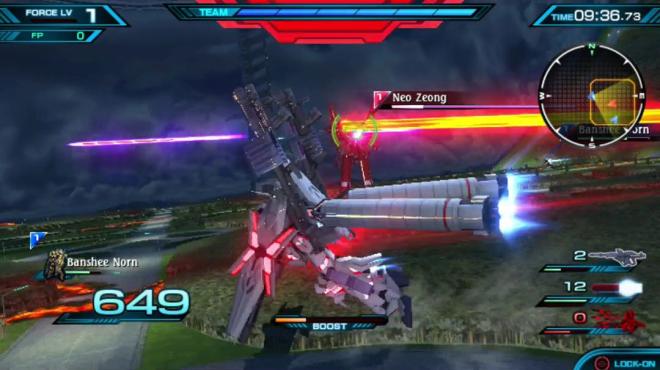 While most character models look a little rough around the edges, the game actually looks rather nice in motion, which each suit being animated absolutely terrifically, making fights a whole lot more exciting and fun to watch. While the lack of any sort of anti-aliasing stings in places, it leads to a game that has almost no noticeable performance issues. The arenas aren't terribly interesting, for the most part, but there are a few stages that look pretty good, and the character artwork is great. 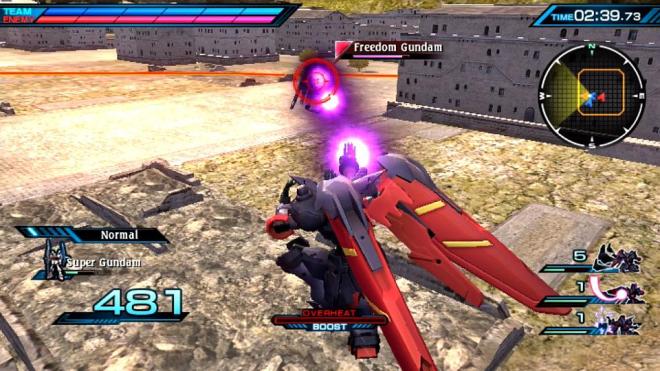 With a huge cast of characters spread across so many different series, it's great that every single character is voiced by their original Japanese actors (where possible, of course). There's a ton of music from each series, too, and while it heavily varies in quality, there are a ton of fantastic tracks here, though we unfortunately don't get any of the vocal tracks seen in the Japanese release of the game due to licensing issues here.

The lack of online play makes this a game with far less longevity than it deserves to have. That said, the campaign mode is incredibly robust, and getting all of the haro medals and unlockables makes revisiting each level extremely worthwhile. There's not a ton to do outside of that, unfortunately, but it's great to see a fighter pack its basic single player mode so full of content. 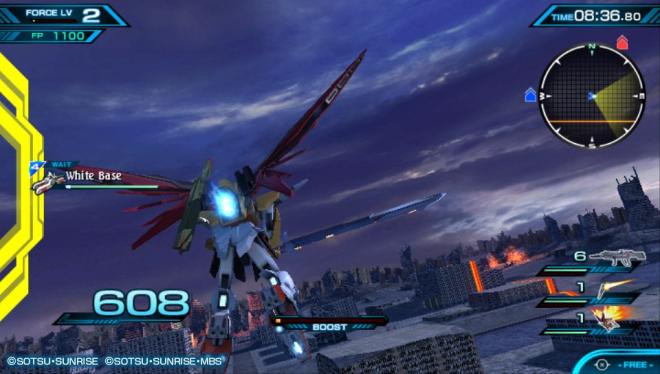 A good way to experience the basics of the terrific 'Extreme VS' games, but it absolutely falters compared to the rest of the series due to the lack of any sort of online play and a far smaller roster than it deserves. There's a long, content-rich campaign mode that ends up being far more fun than I'd ever expected. I sincerely hope later entries have a similar mode, but then also have online multiplayer.