The Game Itself
4 Stars
The Video: Sizing Up the Picture
4.5 Stars
The Audio: Rating the Sound
3.5 Stars
Replay Factor
2.5 Stars
Bottom Line
Recommended

Although the Texas-based game developer Renegade Kid had made headlines with their M-rated first-person shooter 'Dementium: The Ward' for Nintendo DS, they didn't really establish themselves as a studio to watch until 2012's 'Mutant Mudds.' This 2D platformer was simple on a mechanical level, but was designed to provide a thrilling challenge that tested the fundamentals of gamers. Now four years later, the studio has gone back to the game that put them on the map and released what they consider a standalone expansion of the original 'Mutant Mudds.' Coming to now the PS4 (and cross buy with the Vita), this is 'Mutant Mudds Super Challenge.'

When 'Mutant Mudds Super Challenge' was first announced by Renegade Kid, I couldn't help but be disappointed. I adored the original game, but I really felt like it provided a staunch enough challenge. Focusing on being even more difficult felt like the wrong direction for the series as I wanted to see Renegade Kid improve other areas of the platformer instead. The gameplay was already excellent, but the game didn't have much in terms of enemy variety and ended anti-climatically due to the lack of boss fights.

Thankfully, while 'Super Challenge' isn't a true sequel, it does add plenty to the established formula and isn't just a collection of super hard levels. One thing that hasn't changed at all is the core gameplay. I immediately felt familiar with controlling Max, the water-gun toting hero of the game, as I jumped over enemies made of mud and blasted them with water in order to destroy them. It's a basic game from a control standpoint, as the only interesting mechanic is that Max has a jetpack attached to him. This allows him to glide (which is done by simply pressing the jump button again) for a limited amount of time, although he doesn't gain any altitude here. 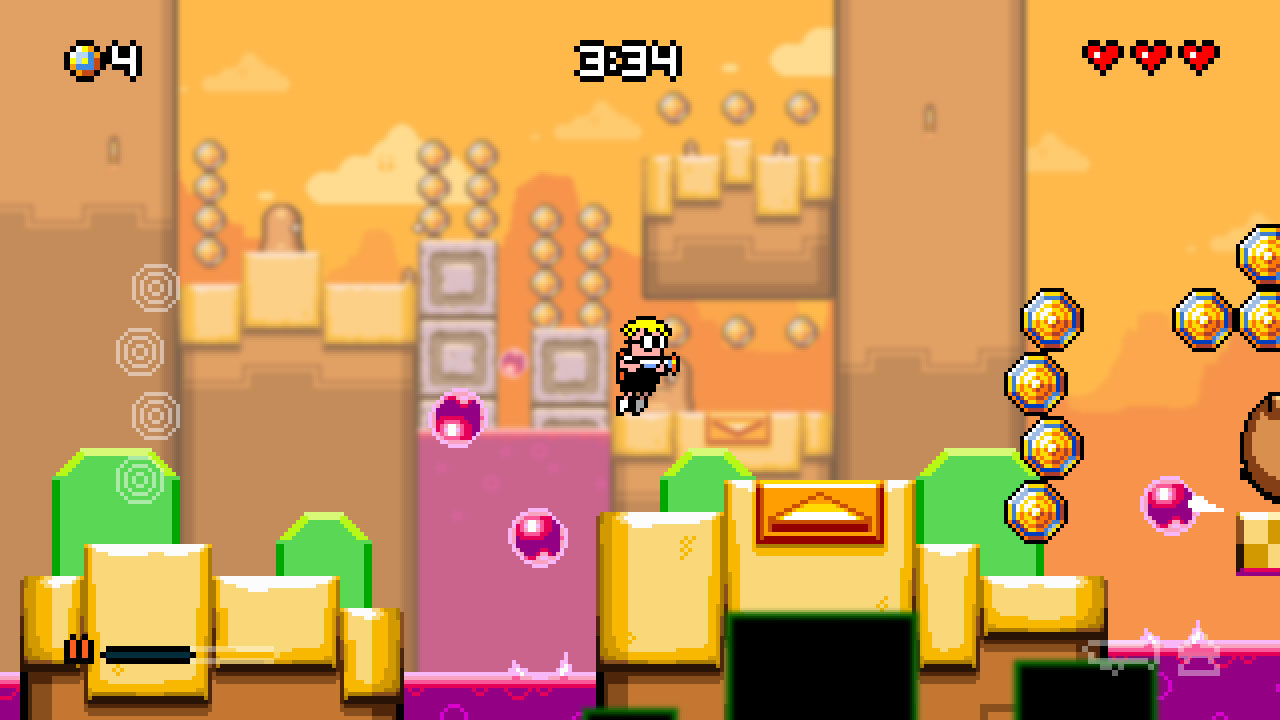 Since the gameplay is so simple on purpose, 'Mutant Mudds' relies heavily on its level design. Thankfully, this is where the developer really shines. Renegade Kid are masters at designing levels that provide a heavy challenge while never being unfair. I may have died over 300 times while playing, but it was always due to a mistake on my part. Stages are filled with projectile-throwing enemies, flying predators, and other obstacles that threatened to kill me in one-hit, but it was my job to navigate them.

I only ever really had three options at my disposal at any time: shoot, jump or glide. I often had to string these together and do them with incredible precision, but I was never left wondering what I was supposed to be doing. Instead, it was all about execution. For example, several times in a given level I would have to make Max jump in the air, tap the jump button again in order to make him glide, and make sure he was in the right position so he could thread the needle between a pair of spikes that would otherwise instantly kill him. These simple actions turn into complex sequences and every level is filled with them.

While the title of the product indicates the difficulty level, I should note that there isn't any difficulty curve in 'Mutant Mudds Super Challenge.' Renegade Kid has designed a game that is very difficult from the very beginning (I died a handful of times on the first level) to the game's final stage. There is no ramp in challenge or any difficulty spikes, as the difficulty of the game is turned to 11 immediately. That's one reason I can't recommend this game to anyone who hasn't played the original game, which featured a much more natural challenge level. This is meant to be something for gamers who wanted even more punishing gameplay and it shows in its design.

In fact, 'Super Challenge' leans a bit too heavily into its own punishing design in a few areas. Just like in the first game, there are secret levels (which are Game Boy and Virtual Boy themed) that can be accessed. These were an awesome bonus in the first game, but they actually have to be fully completed (which includes finding all of the collectible coins) in order to unlock boss stages. Since finding all of the coins is difficult to do in a single run, this led to me finishing one of these secret levels and then being popped back into the overworld. That would've been fine, but the game doesn't allow these secret worlds to be selected in the main menu. I instead had to enter a regular level (which is already super difficult), and trek my way back to the hidden level's entrance so I could try again. I get that the game is trying to be difficult, but that was just needlessly frustrating and time consuming. 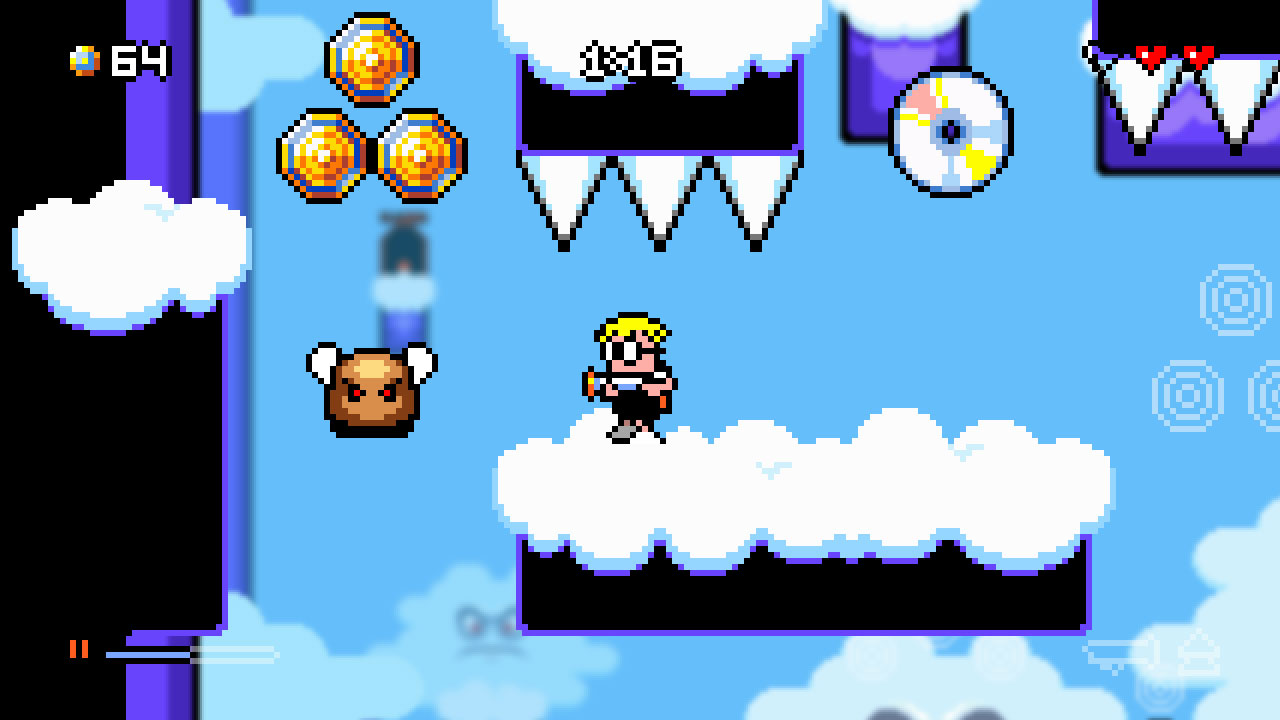 That said, it's a frustration that I had to put up with since I wanted to see the game out and play the new boss levels. These fights are 'Super Challenge's biggest addition and are really fun to play. The first world's boss is an encounter with a giant Mudd monster who is composed of a bunch of regular enemies. I had to balance attacking him and avoiding his attacks, since an attack would cause the tiny enemies to fill the small area I was fighting in. It took quite a few deaths, but I was eventually able to find the right balance and defeat the behemoth. It was a satisfying battle of both reflexes and wit, and I really hope Renegade Kid builds on this in the forthcoming sequel.

It's also worth noting that while the PlayStation 4 version of the game supports cross-buy with the Vita version of 'Mutant Mudds Super Challenge,' it doesn't support cross-save. That means the save data is completely separate for the two versions, and progress doesn't carry over. It's a real bummer, and means that gamers will have to decide if they want to play the game on a TV or on the go. Due to how frustrating the game can get, I feel like it's a better fit on handhelds. Playing it for long stretches at a time only heightens the annoyance of its shortcomings, and the levels (if played skillfully) typically only take a few minutes to complete. 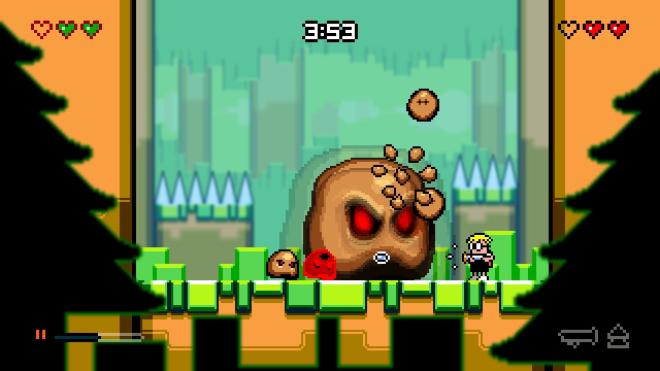 'Super Challenge' has a lot more visual flair than its predecessor. The game's "12-bit" style is still gorgeous to look at, but Renegade Kid has done a better job crafting interesting looking levels for players to run around in. There are several different themed worlds to go through, such as a really fun cloud-based area, and new enemies have been introduced into the mix adding some much needed variety to the scenes. The only bummer here is that naturally the 3D support is gone on PlayStation 4, so it loses the cool visual effect of jumping between the foreground and background (which the game does often). That wow factor being lost is unavoidable, but it's really just one more reason why the 3DS version is superior. 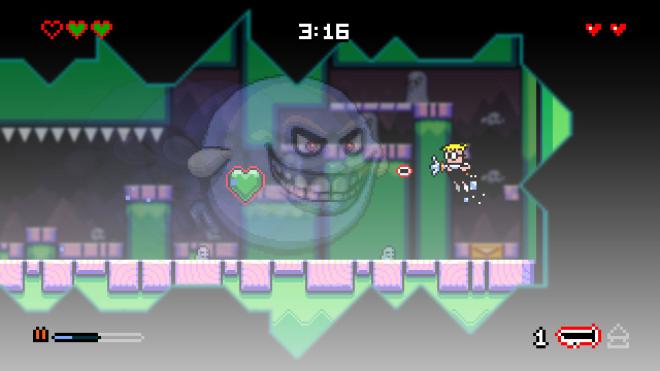 'Mutant Mudds Super Challenge' reuses a lot of the same music and sound effects as the first game. That isn't necessarily a bad thing, as the high energy chiptune soundtrack is cheery and balances out the difficult gameplay, but it isn't quite as impressive the second time around. Considering the game was pitched as essentially an expansion to the original, it fits in with that motif even if there isn't a ton new to hear.

The original 'Mutant Mudds' had a ton of replayability, and it kept me coming back until I had completed the game 100%. That isn't really the case in 'Super Challenge,' but that's due to how the game is structured differently. The optional challenges in the first game, such as collecting all 100 diamonds in each level, are now mandatory in order to beat the game. So, while there is just as much content here, it now has to be done instead of being left for an extra challenge. There is, however a secret playable character hidden (many of which are from other indie games) in each of the game's stages. It's definitely a cool addition, but since every character is just a palette swap it doesn't really add anything to the gameplay. Thus, I never felt interested enough to find them all. 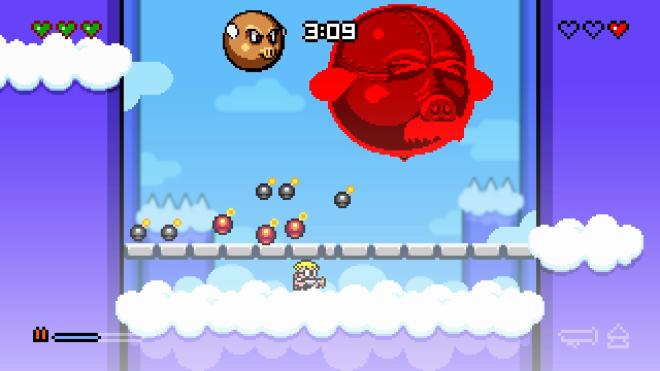 While 'Mutant Mudds Super Challenge' loses some of its charm without the  stereoscopic 3D ofthe 3DS predecessor, the fantastic platforming is still fully intact on PlayStation 4. It's a highly difficult affair, sometimes tip-toeing into tedium with how many game over screens I looked at, but its still some of the most rewarding platforming available. The Nintendo 3DS version of Renegade Kid's latest love letter to 2D gaming is still king, but this is a fine port even if it lacks some of the added bells and whistles that could've been added.