The Game Itself
4.5 Stars
The Video: Sizing Up the Picture
3.5 Stars
The Audio: Rating the Sound
4 Stars
Replay Factor
4.5 Stars
Bottom Line
Recommended

It's been five years since 'Deus Ex: Human Revolution' brought the name 'Deus Ex' back to bear on players across a variety of platforms. Eidos Montreal and Square Enix have since grown the brand by leaps and bounds, but what's been missing has been a propel sequel. Over the last two years, 'Deus Ex: Mankind Divided' has existed in previews and similar teases, and all the while, the very combustible world of augmented humans , Adam Jensen, Neuropozine, and Hugh Darrow has been waiting for its next step.

As the 'Mankind Divided' part of the name suggests, things are not all right in the world. Fortunately for players, Jensen, an augmented ex-cop turned agent, though having no taste for intrigue, is nevertheless ready to once more become embroiled in the headlines.

Not for the first time in this generation, a game appears that isn't specifically revolutionary, and, to be fair, falls short of the visual standards set by the best-looking games of this gen, but is entirely welcome and better than its faults. What 'Mankind Divided' does do well, is deliver in two key areas, gameplay and story. This is done using the hub-based framework of 'Human Revolution,' and should thereby be familiar to 'Human Revolution' players. 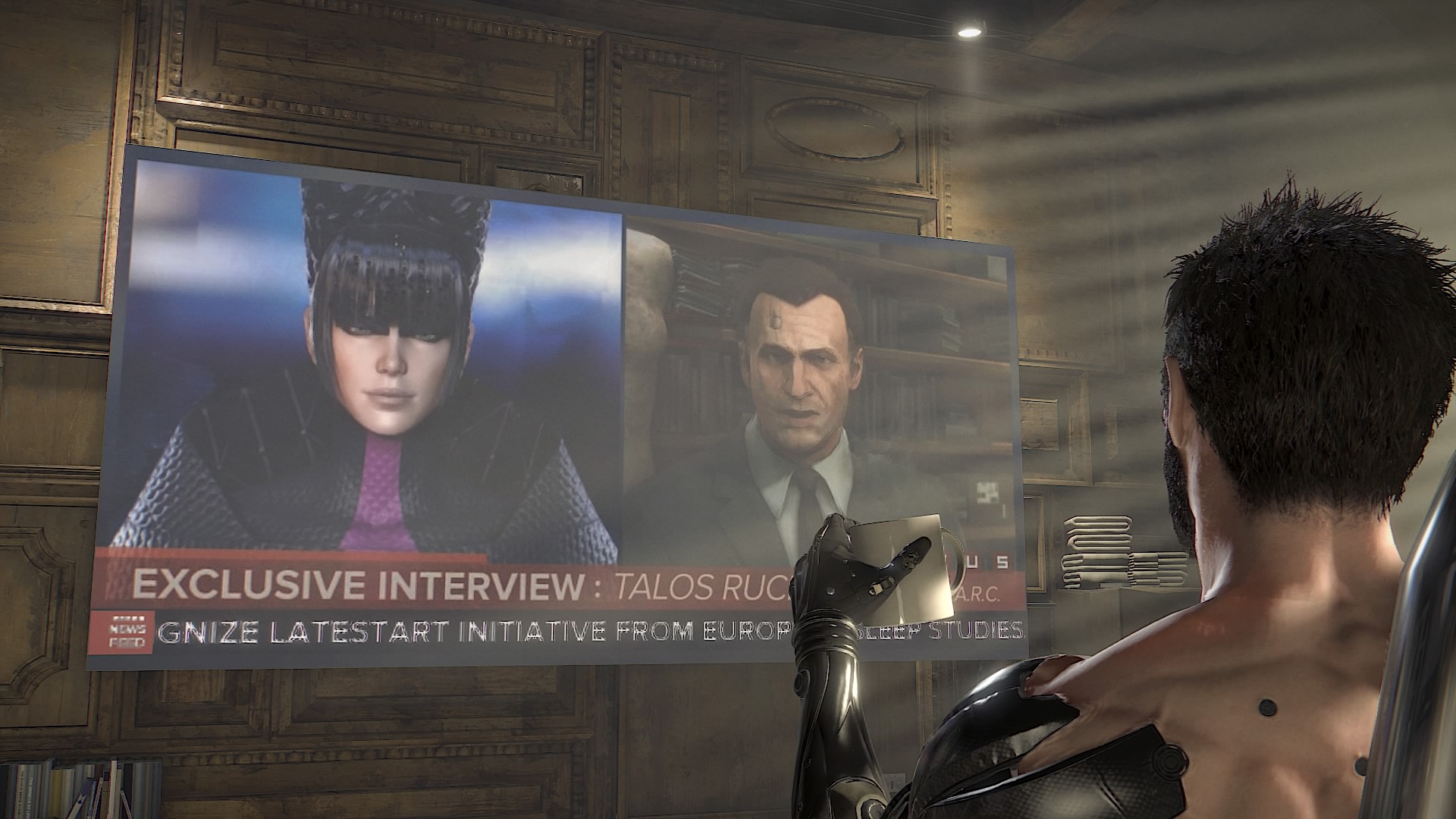 For newcomers, an optional 12 minute intro attempts to get the audience up to speed with a retelling of the previous game's establishing story. It's a good refresher to say the least, and that's important, as 'Mankind Divided' is on a macro level, a proper story sequel. I'm treading quite lightly here (more than usual for me), but it has been established well prior to release that 'Mankind Divided' features a world that is experiencing a serious lack of tolerance.

Here's a non-spoiler quote lifted from the early game: You want me to spoil it? You want the bottom line? I'll tell you.

All of society's facets and ills appear to be wrapped up in a fear (and even hate) of augmented persons. Augs are in the minority and are losing ground fast. 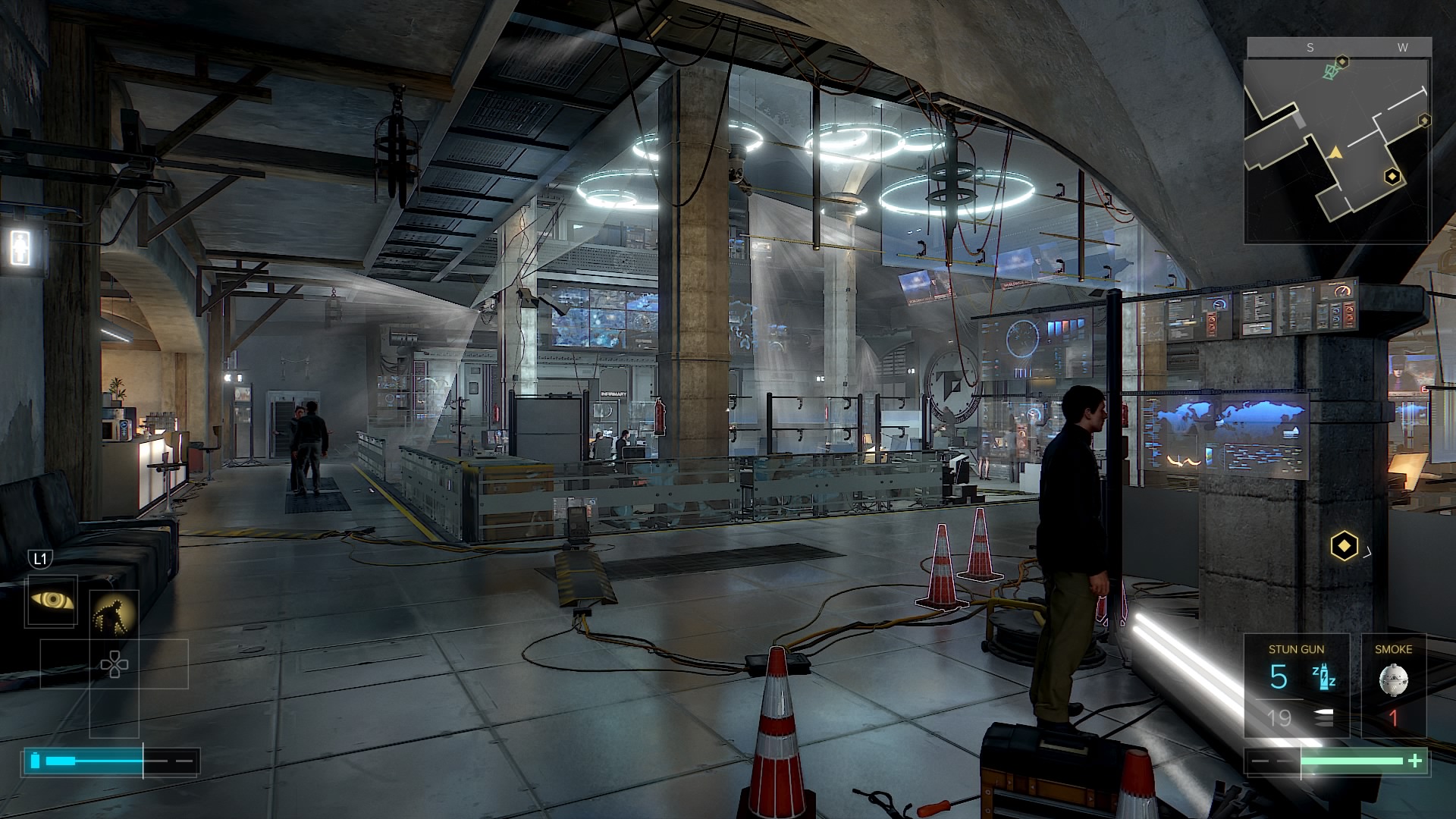 The Jensen and co. I met at the beginning of the last game were nothing to me. And this game begins in a similar matter, but I bought in much quicker this time. I'm a fan of cyberpunk, but a very critical one. The police-state of Prague portrayed in the game is nightmarish on several levels. The nation has taken a dark turn that is terrible reminiscent of the 20th century strife seen there. It's also a microcosm of the society at large in the game.

The moment when I, a would-be good guy, realized that I couldn't help everyone in the game that I wanted to, gave me pause. (It's a colder feeling than having been betrayed.) Even a maxed-out Jensen can only do so much.

While I was chasing down a series of mysteries, and trying to dodge a double-cross or two, the city and other areas offered up plenty of distractions. I stealthed and hacked my way into homes and offices, into computers and cameras. I traded drugs to junkies and assassinated via word and deed the most irksome of the NPCs I encountered. When I hit barriers, I spent my Praxis points, dug through my cultivated inventory, and even put a pause on my no-kill ways when it suited me. 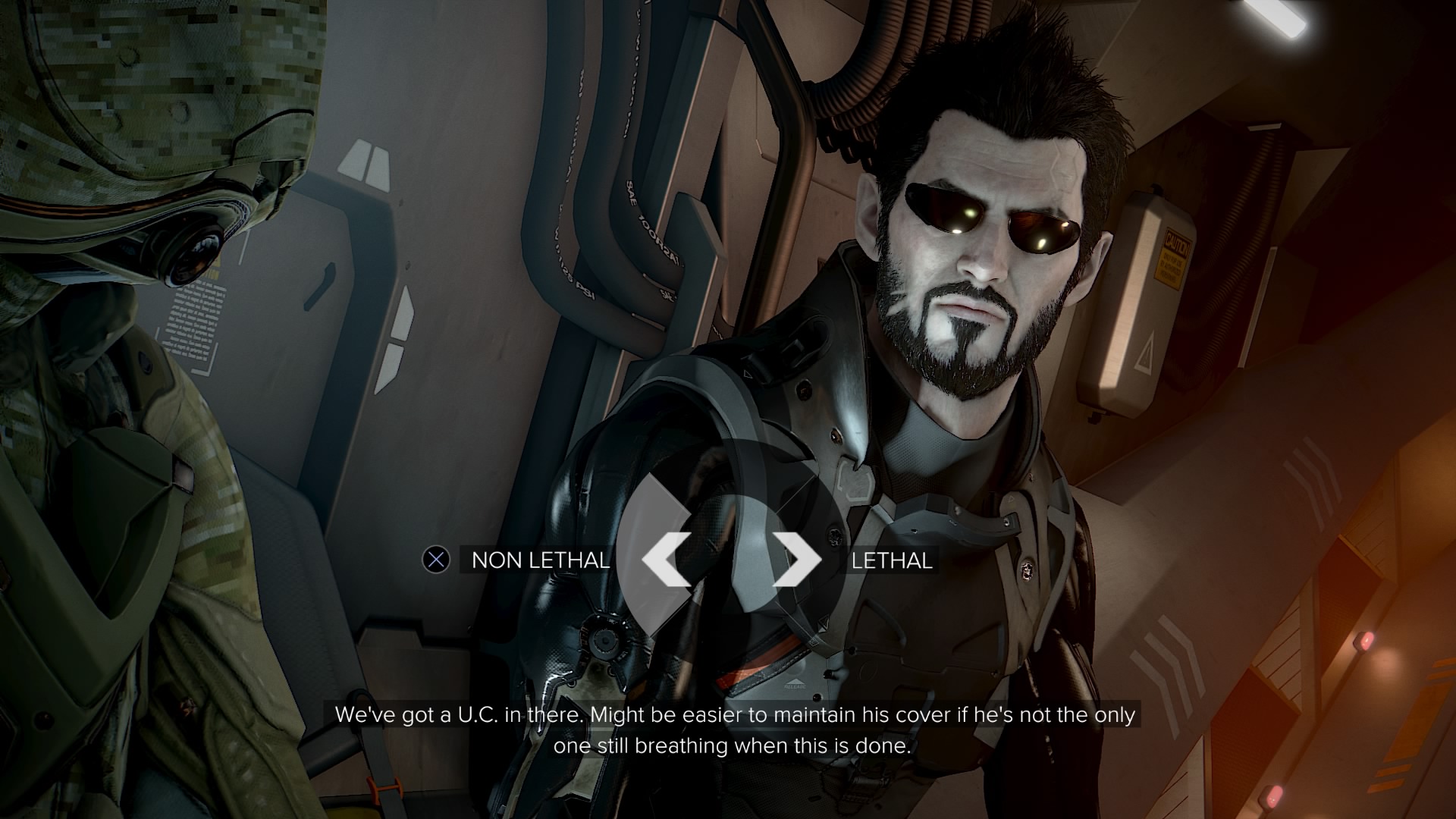 All of this is enabled by the gameplay. Restricted areas, locked doors, armed guards, and other puzzles usually seem to have multiple possible solutions. I used the manual save system to try a few, and would end up picking the first solution that felt like my style. That might mean tackling a difficult vault door or armored guard only to find a vent that would have let me side-step.

The non-lethal and lethal options seem balanced well enough. Likewise, telling someone to piss off in a conversation didn't usually close of their questline, but a murder death kill might.

At first it felt like there were too many controls crammed into DS4, but I eventually adjusted. (This was with the default control scheme, but there are Human Revolution and FPS styles as well.) There is depth here, with different important ammo types, crafting parts, and gun customization to go with an interesting take on the skill tree. I suspect non-hackers will want to carry plenty of multi-tools and crafting parts. 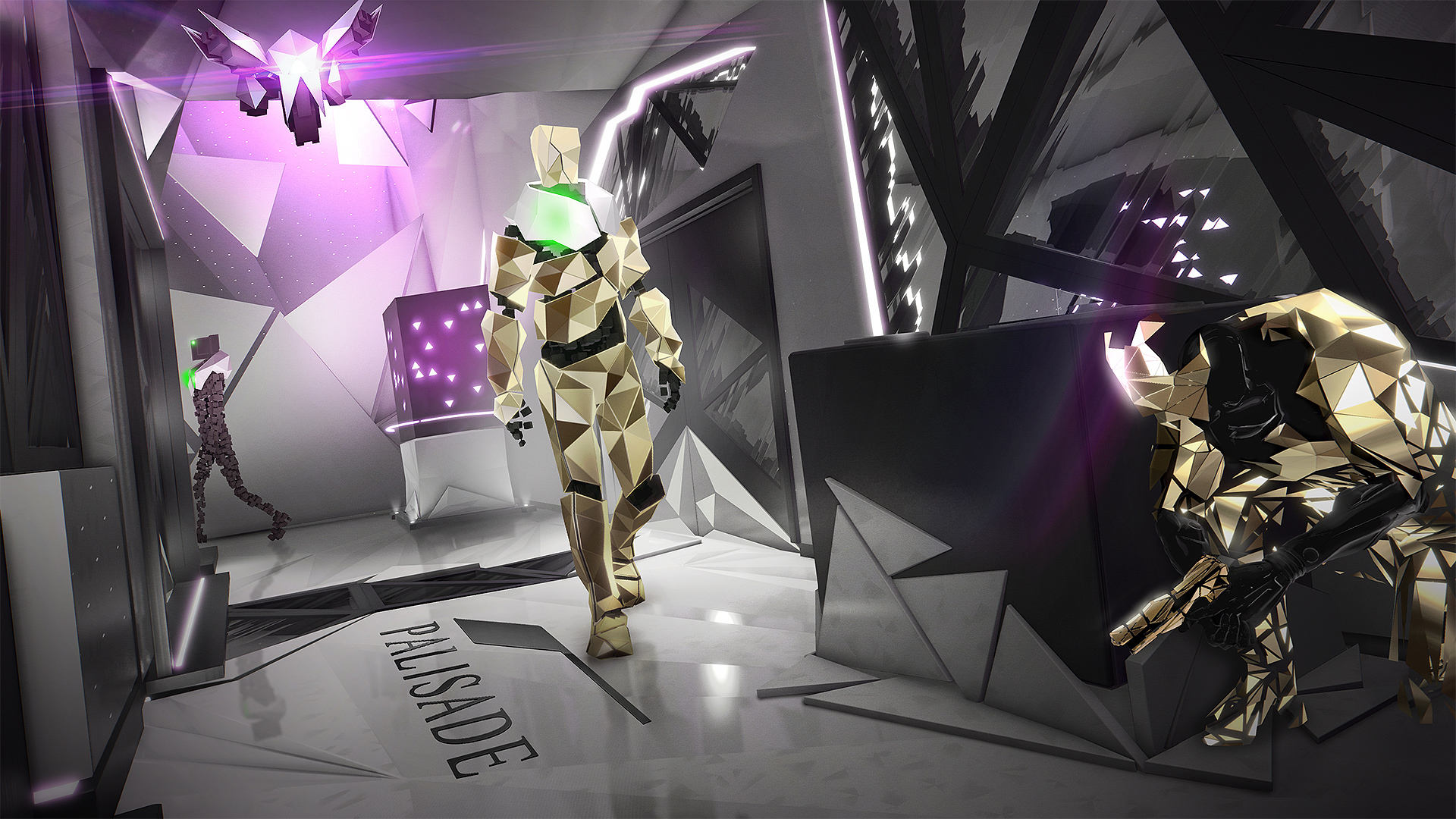 When I felt like I was too off the beaten path and down the rabbit hole in the main story, I could switch over to the Breach mode. Breach has an arcade feel, but also has its own in-game economy. If you're into single-player story content and don't care about leaderboards, I still recommend playing a good amount of breach. It has its own story elements, and I love that Rippers don't need to worry about lethal and non-lethal takedowns.

There's a strong variety at work in Breach as well, with secondary objectives, elimination objectives, data fragments, handicaps, stealth paths, and so forth being taken in and out frequently. Seeing other players on the board can be motivating in its own right. I do wish the consumption of items, modifiers, and of all things, ammo were tweaked to suit the time trial nature. A quick reset is needed as well. (Come on patches!).

Ultimately, both important modes offered me freedom, and delectable choices. 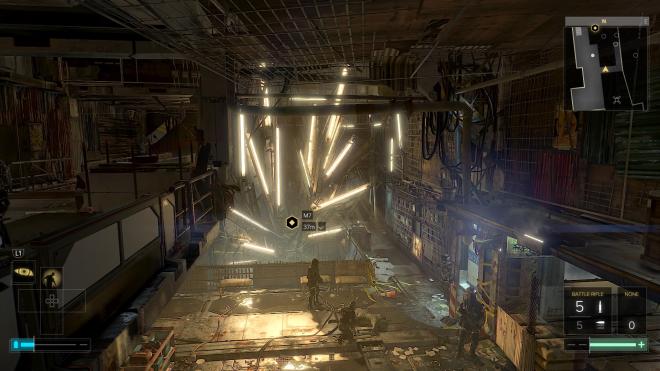 On the PS4, 'Mankind Divided' is uneven in its visuals and in its performance. From the perspective of presentation, the strong to excellent art design is let down in some key areas. The pre-rendered cutscenes can look very soft (and worse on a 4K set), and the animation in the real time cutscenes (especially the facial animation) is very stiff. I had screen-tearing in a few of the bigger real time pieces. Framerate is lousy in several open areas, and these areas usually look like they've been optimized by the removal of polygons and textures. The load times are fine, but I wish that cool reset from the tutorials could be used to greater effect.

Focusing in on these issues is troublesome because interiors and other gameplay areas, along with individual objects (like in the inventory) can be stunning. It's easy to find the equivalent of an excellent matte painting that has been redone in a 3D space.

And who, may I ask, makes better use of the color gold?

While the story is uneven, the simple look of Breach is its own success. 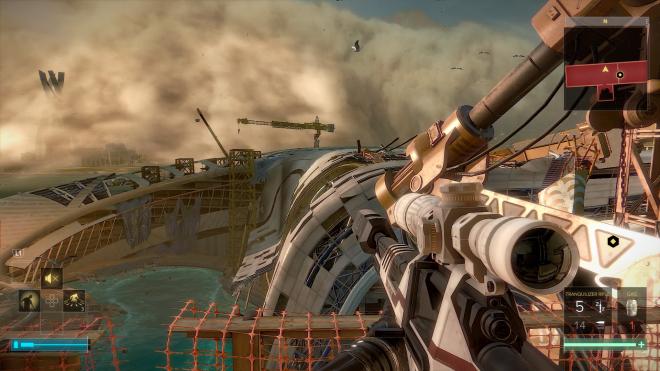 The soundtrack is wonderful, though the preceding game is a tough act to follow. The voice-acting is mainly strong, which can be hard to regard because of the animation. There is the occasionally wooden character or performance.

Here again, the pre-rendered cutscenes stick out in unpleasant way, and this will likely trouble home theater types. Fortunately, the real time cutscenes, gameplay, and metagame are where they should be. There were also many times when I wished I had a special augmentation that could turn off all in-game radios and TVs. 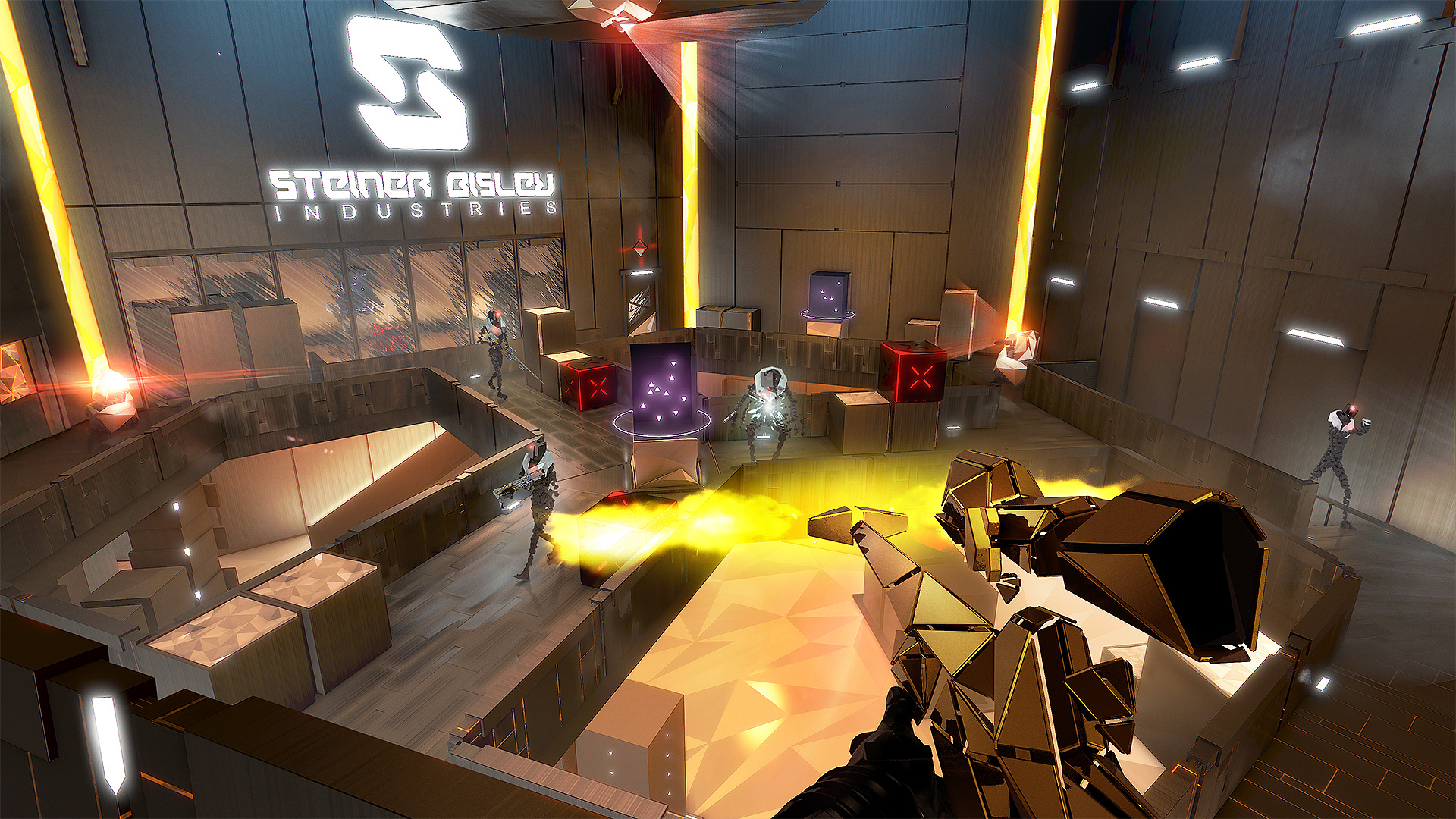 Breach mode is very addicting, and I found myself playing it for much longer at a time than I intended. For the story, this is the first time in a while that I can remember thinking about my next playthrough for a story mode repeatedly during my first. Even when I saved and loaded a single situation to death, I still felt like there was more for me to scour out of the game. Many of the elements of 'Mankind Divided' could be compared to say, 'Fallout 4.' For example, there are the hacking and the text-based NPC story elements, but there is also the dialog and the that way things play out. And yet I never really felt like I do when I play 'Fallout 4.' (If anything, 'The Witcher III' feels more apt.) These may be similar elements, but key differences produce a very different reaction for me. Like when choosing dialog for Jensen, he says what I choose, not some other thing. Furthermore, even exhausted dialog trees could be, in a different playthrough, supplanted by legwork.</p 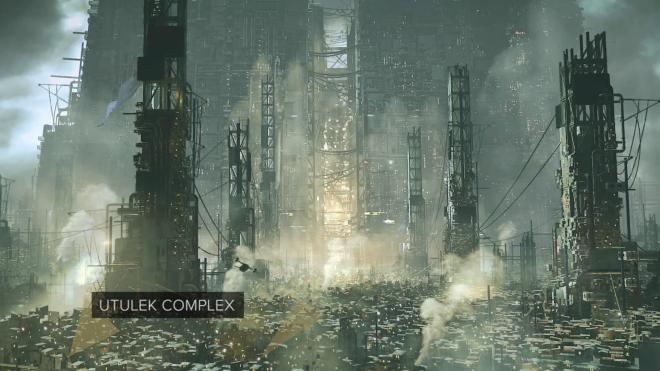 As a game, 'Deus Ex: Mankind Divided' has the power to draw me in. That's a power seldom seen at this level, where rebellious heroes and evil organizations are a dime a dozen. With enveloping gameplay, a stimulating story, a signature art style, an excellent soundtrack, and the spin-off-worthy Breach Mode, 'Mankind Divided' is well worth the time and expenditure.